The Kings are currently en route to Philadelphia, where they’ll practice on Friday in advance of matinees Saturday and Sunday against the Flyers and Capitals. Before loading up the plane an optional practice was held at Toyota Sports Center, where Jonathan Quick was in gear and practiced with the small group. I’ll have stories up on Quick and Paul LaDue, who took part in his first regular season practice with Los Angeles. Several bullet points: Jordan Nolan suffered a muscle injury Wednesday – Lisa Dillman of NHL.com said that the muscle of concern “appears to be a leg muscle” – and will not travel at the outset of the trip. Jonathan Quick is traveling, though there isn’t any real acceleration in his timeline. Tyler Toffoli is also traveling and could make his return to the lineup this weekend. Tom Gilbert cleared waivers, via reports. 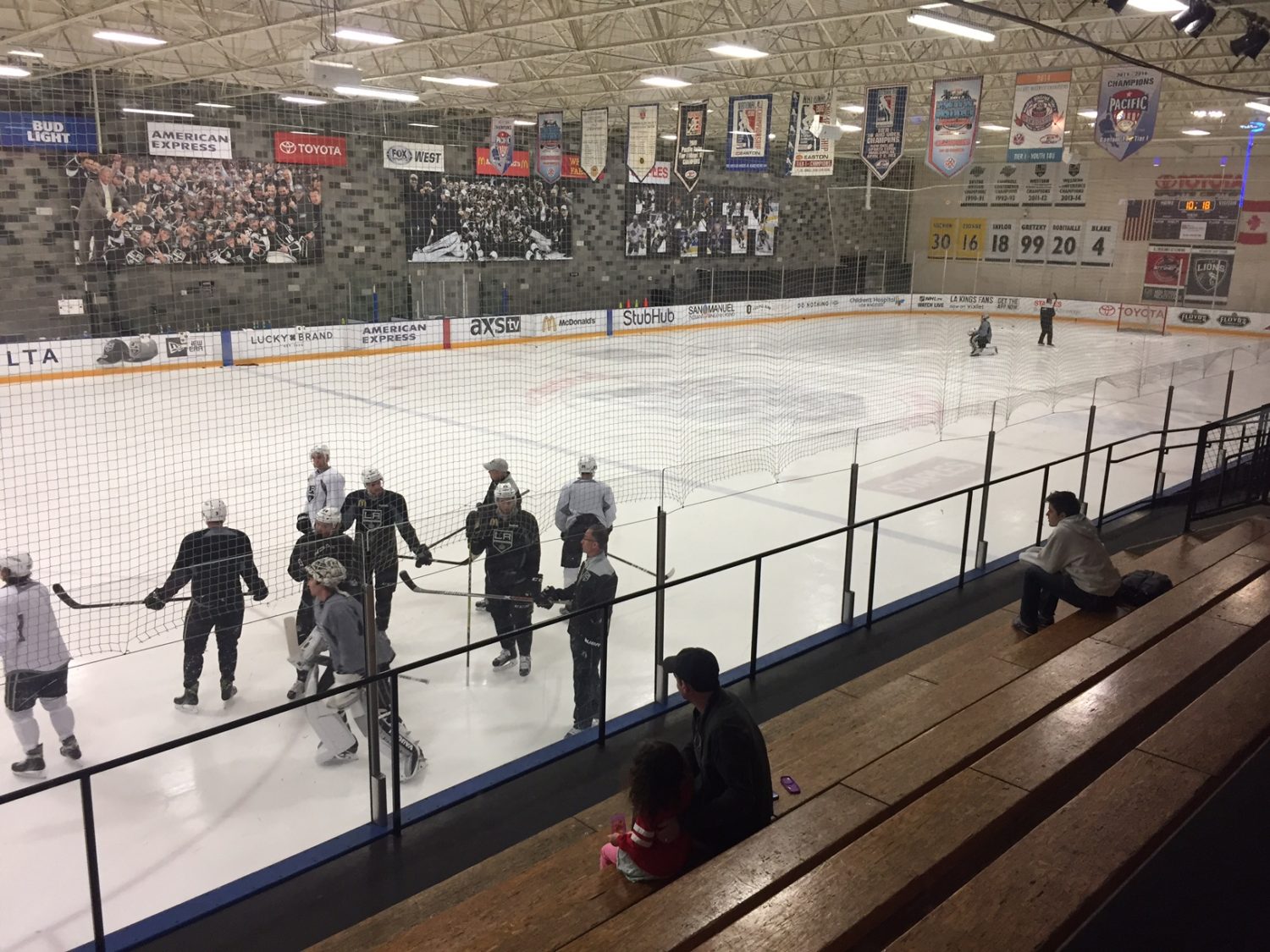 That’s Quick and Ranford at the far end.

On whether the winning streak has roots in strong starts and limiting goals against:
I think it ties in to the way the season goes along – teams’ identities, teams that have strong identities. Most of our first periods prior to us winning a few games when we gave up goals in the first periods were our best periods. They were bad goals. We were not getting goaltending. It’s not really a team reflection or we just decided that we were not going to give a goal up. That’s not easy to do.

On what influenced Paul LaDue’s recall, and what he had seen of LaDue in the preseason:
Well, first off, he’s a right shot. With Greener going down and Gibby not playing much the last couple months, a right shot was what we wanted. We had one in the organization, and we brought Kevin up when Brayden got hurt, and he’s a left shot, so we wanted a right shot. So that’s the difference. [Reporter: Also, is there anything you can say about what you saw from him either in person, because I know you’ve been out to a lot of Ontario games this year, or on video, or what you have heard about how he has come along this season, his first pro year?] Well, we had him all summer and all training camp and every exhibition game. We played him in all of Drew’s situations when Drew was gone for the World Cup, so that’s way more important than what somebody says or what the video shows. You don’t really learn much from either one of those areas. First off, he’s in the same age group. He’s gone through most of his school and he’s in that Forbort-Gravel-McNabb – those guys’ age group – so we expect him to be able to compete with those guys for a spot.

On Jordan Nolan’s injury:
Pulled a muscle. It’s disappointing. A guy gets four days off, plays a few minutes, pulls a muscle. We’ll see. Give him a couple days and he won’t be with us at the start of the trip. It’s disappointing when a guy – we have six or seven forwards in our group, and we’re seeing who can stay in the lineup in the last month. He’s been able to stay in the lineup now, and a silly little injury takes him out.