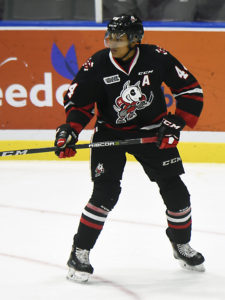 Via Corey Pronman (subscribe to The Athletic here):
Thomas was the best skater on a mediocre Niagara team this season. Whenever he was on the ice, he drove possession, being the go-to guy, playing to gain the zone and make things happen offensively. He’s an intelligent playmaker with a fair amount of skill. He makes a ton of smart plays with the puck on his stick, gets a lot of controlled zone entries and shows high-level instincts in creating chances. Thomas’ skating has improved a lot since last season to where it’s a strength this season. Despite his speed, I don’t see him push the pace too much. I’ve seen the occasional good burst, but, in general, he prefers to play a slow game, especially with the puck on his stick. His two-way game has developed. He’s looked competent playing center at the OHL level, has some bite in his game and has killed penalties for Niagara, although some scouts I’ve talked to wonder if he’ll end up back on the wing as a pro player. I’ve been lukewarm on him in all my viewings, wondering if he has that extra gear offensively and in terms of the pace he plays with, but the numbers and skills all seem to point to optimism.

Niagara coach Billy Burke said: “He’s noticeably quicker than last season. We converted him to center this season, his natural position. He’s incredibly smart, very high hockey IQ. He’s very responsible, he doesn’t cheat at all. He impacts almost every shift for us.”

Via McKeen’s Hockey (subscribe to McKeen’s here):
If you like your scoring centers to be consistent, Akil Thomas is your prospect. The highest scoring U18 player in the OHL – and second only to Andrei Svechnikov on points per game – Thomas never went more than two consecutive games without getting his name on the scoresheet. The right shot center plays a very versatile game. He does not always ger points for visible intensity, but he can and does contribute to every type of situation. As he has improved his strength over the last two years, he has gained some explosiveness to his stride. Although he sometimes seems to glide, he has great edges that he employs to be elusive in the offensive end. Another area in which he has improved greatly in the last season was in his two-way game.

A penalty kill regular for both Niagara and the Canadian U18 team, he reads the play very well and excels in transition by keeping his man tied up and clogging passing lanes with a well-placed stick. It should come as no surprise that won the transition agility and transition agility, with puck events in the CHL Top Prospects Game skills competition. His IQ also sticks out when he possesses the puck. He controls it with poise and decisiveness. He does not rush or force play creation, he would rather slow the game, advance forward slowly along the wall, and let the game come to him finding an open teammate or initiating the cycle game. Unlike some other big point producers in junior, Thomas was not surrounded by elite teenaged talent. Although his offensive production skews heavily to the playmaking side of the equation, he has a remarkably powerful wrist shot that he couples with a quick and deceptive release that portends to higher goal scoring totals in his future. More a North-South player than a dangler, he does have the puck skills to beat defenders in one on one situations off the rush although he will likely never be accused of being too cute with the puck.

If you want your top two centers to be physical specimens a-la Getzlaf/Kesler, Thomas is not for you. He is a little short and a lot slight. He does not seem intense, but is a very hard worker and has enough strength to not be overpowered by opponents with any regularity. He will get the puck on to a teammate’s stick before he can be taken out and is, in fact, very comfortable with taking a hit to complete a play. Not everyone will like Thomas, due to the above discussed limitations based on his size and/or style of play. But enough people do like him that he should go off the board on day one of the draft and make the ones who overlooked him regret it. 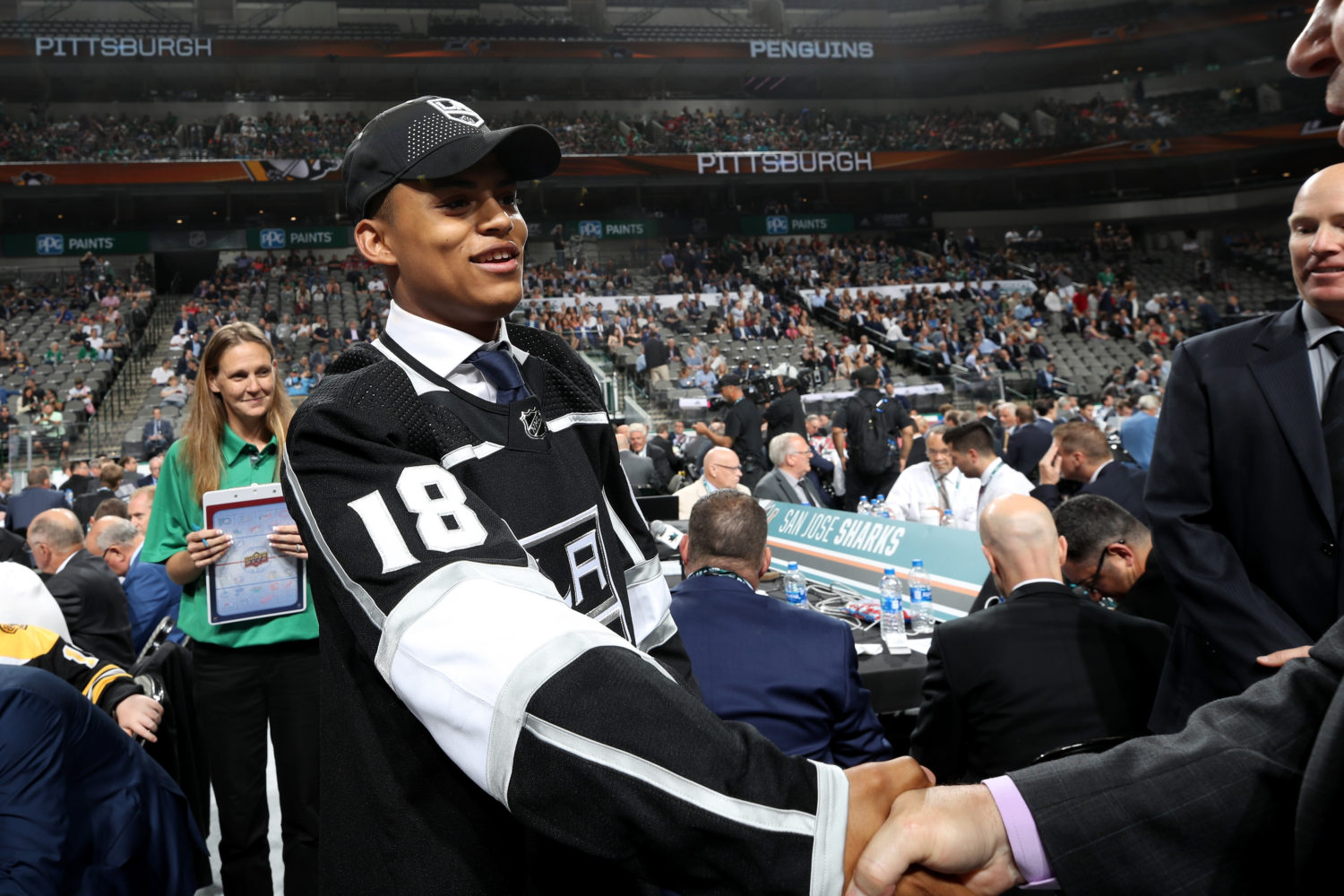 Akil Thomas, on if he had any idea that Los Angeles was interested in him:
I probably met with them a little bit more than any other team. I knew they were pretty interested. I’m so happy to be a part of this.

Thomas, on his immediate reaction to getting drafted:
I felt like I was in a movie. Just didn’t really feel like real life. I stood up and hugged up a bunch of people and wanted to get down as soon as I could. Definitely a surreal moment.

Thomas, on whether he’s been to Los Angeles:
No I haven’t. I haven’t been on the west coast at all.

Thomas, on whether the Kings see him as a center or a wing:
I think they see me as a winger, but I think that’s cool. I can play center or winger, so if I could wear an LA Kings jersey one day, and it being wing, then I definitely want to do that, for sure, so be it. Whatever they want me to play, and whatever I can do to help the organization, I’d be happy to.

Thomas, on developing his skating in recent years:
I do power skating with Dawn Braid, and she’s really, really good. For me, I’ve kind of grown the last two years. Sometimes I actually feel like I haven’t been on the ice for a while because I grew and my body feels weird. It’s just about perfecting little things. We really don’t do that many drills. We do the same drills, and you just want to perfect it. I think she’s helped me a lot.

Thomas, on getting on the ice with Gabriel Vilardi in the same organization:
He’s obviously not fun to play against, but when I’m on the bench, he’s very fun to watch, and I kind of learn off him and see what he does. He’s not only a good player – it’d be awesome to be on the ice with him.

Thomas, on his opportunity with Niagara:
It’s been huge. I had a big role at a younger age than usual. We were a young team my first year, so I got an opportunity to step in and earn ice time, and it was awesome. I’m very thankful for the Niagara staff in giving me an opportunity and trusting me. It’s been a very good two years.

Thomas, on driving down to Dallas in an RV:
It was actually really cool. We have a lot of people, and we can actuyally extend the outside when we’re stopped. When we’re dribing it’s pretty tight, but we did all we could to keep us busy. We watched movies … and stopped a couple times. It was a really cool experience. [Reporter: Where’d you stop? What’d you take in on your way down here?] We actually picked up my aunt and uncle and their kid in Fort Wayne, so we went to the Windsor border, and we just went the Tennessee route, and on the way back we’re planning on stopping in Oklahoma because we actually used to live there and we have family there, and we’re going to have a barbecue. We’ll see what happens. 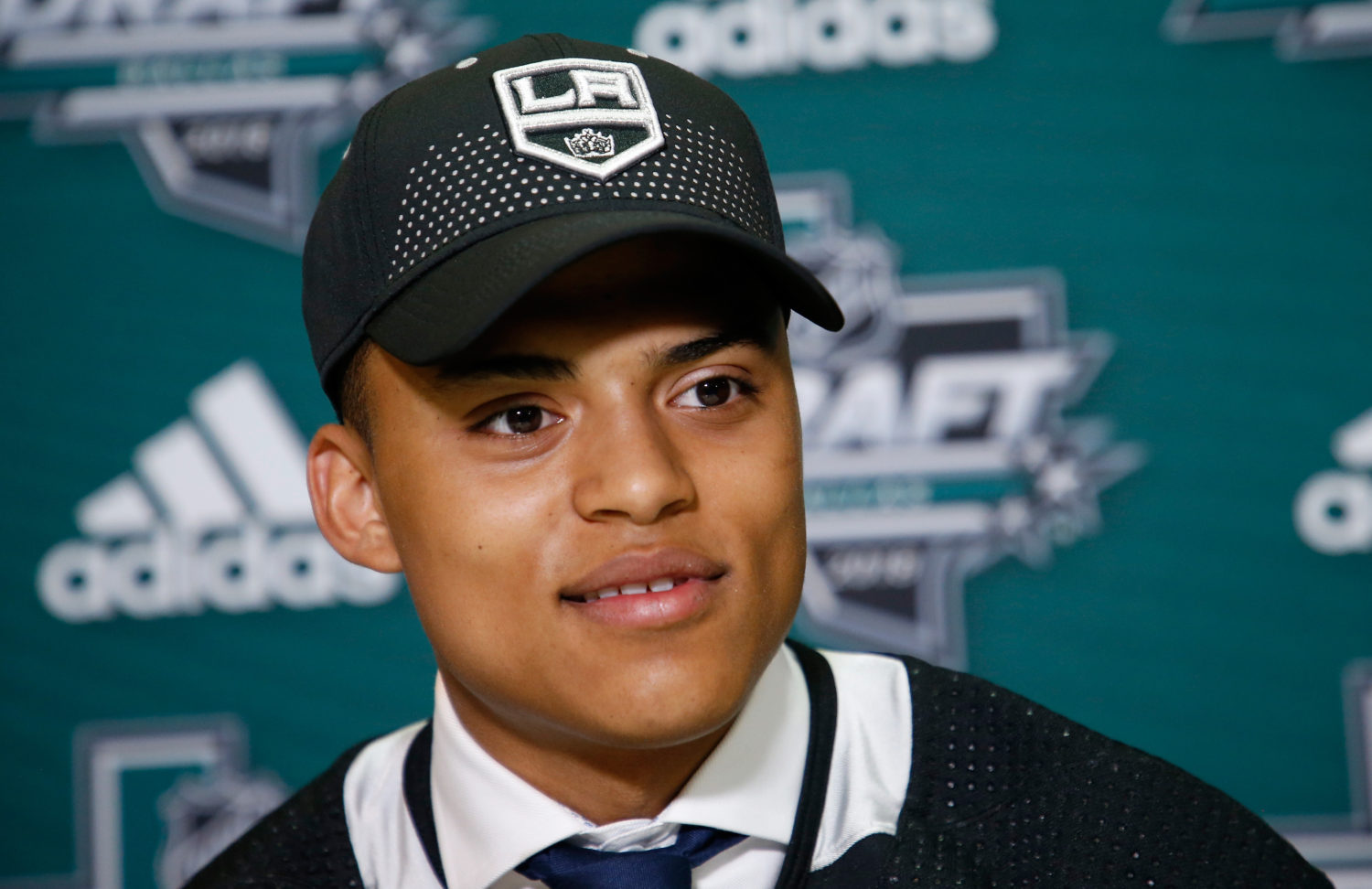