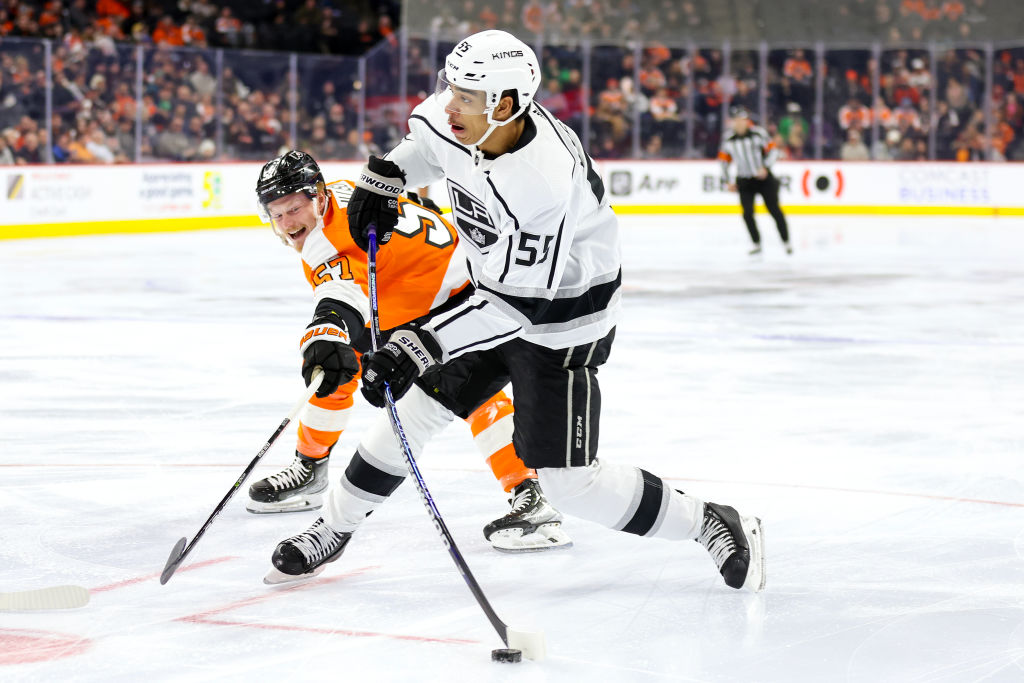 The LA Kings improved to 2-1-0 on their current six-game roadtrip with a 4-3 overtime victory over the Philadelphia Flyers on Tuesday evening at Wells Fargo Center.

Forward Anze Kopitar scored twice in regulation, while Samuel Fagemo also scored and forward Kevin Fiala buried the overtime game-winning goal, as a part of a multi-point night (1-1-2). Goaltender Pheonix Copley made 28 saves to earn his 14th victory of the season.

Philadelphia opened the scoring just shy of six minutes into the game, as forward James van Riemsdyk got the hosts on the board first. The Flyers gained the offensive zone after the puck hopped over a pair of Kings defensemen, leading to a 2-on-1 rush that van Riemsdyk finished from forward Owen Tippett for his eighth goal of the season.

The Kings pushed back, however, with Kopitar equalizing just over three and a half minutes later. With LA on a power play, Kopitar won a faceoff in the offensive zone and two passes later, he buried a one-timer from the high slot for his 13th goal of the season. Fiala and defenseman Drew Doughty tallied the assists on the play.

Just over a minute later, the Flyers regained their one-goal advantage. Forward Wade Allison created space in the neutral zone to gain a partial breakaway down the right wing. Allison’s original shot and the rebound were both turned aside by Copley, but Allison stayed with the play and buried the second rebound for the go-ahead goal.

The visitors answered back just beyond the halfway mark of the first period to tie the game before the first intermission. Forward Quinton Byfield gained the offensive zone and fed linemate Adrian Kempe in space. Kempe then rounded the net and fed a charging Kopitar in front, where he made it a multi-goal game from close range to knot the score at two.

The Flyers opened the scoring in the second period as well to take their third, one-goal lead of the game. A shot from the point deflected off the leg of a Kings defender on the way through, falling right to Philadelphia defenseman Rasmus Ristolainen, who scored on the backhand for his second goal of the season and a 3-2 advantage.

Once again, the Kings answered back to tie the game for the third time. While in between lines after a power play, forward Blake Lizotte fed Fagemo with a lot of space and the Swede walked into the slot and buried a heavy shot past Flyers netminder Carter Hart for his second goal of the season and of his NHL career.

After a scoreless third period saw the game progress into overtime, Fiala sealed the two points with the overtime game-winning goal. After a save at one end from Copley, Fiala led a 2-on-1 rush the other way, keeping the puck himself and snapping his shot past Hart to give the Kings the second point.

Anze Kopitar
On finding a way to get the two points tonight
Yeah, I mean, two points is two points and it doesn’t really matter how you get it at this stage. Obviously, being on the road makes it that much more important. We’ve been in this situation before, we know what we’ve got to do, it’s just a matter of executing it. I thought, for the most part, we did a pretty good job of that, I guess good enough to get the win.

On his line tonight and what he felt they did well
I thought we were pretty responsible with the puck, not too many odd-man rushes against. We had a few more chances and we’ve just got to keep on building on what we’re working with and try to get better.

On Quinton Byfield tonight and what he’s brought to the top line
He brings size, he brings a ton of skill, obviously, but he brings a lot of size and his puck protection is very exceptional. It makes it easy when you get into the offensive zone and he’s on the puck, it’s hard to get it off him. It’s a matter of obviously getting open and trying to make plays off of that.

Mikey Anderson
On a physical game tonight
Yeah,that’s a part of our game that I think we as a group talked about trying to to implement a little more. We know they’re a hardworking and physical group, so it’s a good game to play in. It feels like a playoff game from last year too, so it’s, it’s always a good game to be a part of and it’s nice to get a win.

On the resilliancy in the room to win a game like that
Yeah, it’s big, it shows the character we have in the room, sticking with what we need to do to find some success. Trust in our system, our structure and trust in what we can do as a group to get the job done.

On the other defensemen stepping up when Durzi went down
It’s never good when someone goes down any time, but we’re happy [Durzi] got to come back. When you’re down to five, it’s just making sure you’ve got good communication, knowing who’s going, knowing who’s with who and making sure you’re sharp on the changes.

Todd McLellan
On finding a way to get the two points tonight
Any win, road or home right now, at this time of the year you’ll take. We always enter looking for perfection, that doesn’t really exist and sometimes you don’t give the other team enough credit for that. I thought Philly played a really hard game, they didn’t give us any ice, there were no freebies and there were moments where we gave up some ice and some real good scoring opportunities that they took advantage of. At the end of the day we stuck with it, we came from behind and we found a way to win a game probably not with our “A” game.

On the Kopitar line tonight and their contributions
I thought they were our best line tonight. They didn’t give much up offensively, real good in the faceoff circle, they started with a puck a lot and I thought their game management was outstanding. Some other lines were a little bit ragged, I thought they managed the game really well and of course the goals. Without those, were getting on the plane with a loss but they did a lot of things leading up to the actual goal.

On Samuel Fagemo stepping up with an important goal
Very important. They again gave us some pretty good minutes. I know Sammy was disappointed in Ristolainen’s goal, it was an opportunity for him to check in that situation and he let it get away on him and he knew right away. But then to come back and answer with the goal himself, really important. The timing of that goal and the momentum there was was important for our team as well.

On choosing to start Fiala during overtime tonight
What’s kind of interesting with Kevin, he loves to be on the ice, he just he wants to play all the time. He wanted to be out there in the last 34 seconds and his line was actually up and we made the change. I don’t think he was real happy with that, but that was us thinking ahead, if overtime started we wanted him to go, we don’t want him sitting on the bench tired. He loves to be on the ice all the time and that’s how his mind works. Thank goodness we had him out there fresh and he was able to finish.

On the performance of the defensemen when Durzi was out for a stretch
It was fairly early in the game too, so they had to manage it until Durz got some treatment and then ended up coming back. The five of them did a real good job. I thought Edler looked fresher than he did in Nashville. so that was a real good sign, Walks has been playing well. As a group, I thought they played well.

Notes –
– Anze Kopitar (2-0-2) recorded his 43rd career multi-goal game, tying Butch Goring for seventh-most in franchise history. Kopitar’s first goal marked his 107th career power-play goal, surpassing Dustin Brown (106) for sole possession of fourth all-time in Kings history.
– Kevin Fiala (1-1-2) extended his team-leading point total to 51 points (17-34-51) with his 15th multi-point effort of the season, the most on the team. In doing so, Fiala became the first Kings skater since Pavol Demitra (41 GP in 2005-06) to record his first 50 points with the Kings in 50 games or less. Fiala’s overtime game-winning goal was his second of the season and the 25th of his career.
– Fiala joins Roman Josi (6) and Mark Streit (3) as the only Swiss-born skaters in league history to record three or more 50-point seasons.
– Samuel Fagemo tallied his second goal of the season and of his NHL career during the second period.
– Drew Doughty notched his 30th point of the year (3-27-30) with an assist, good for his 13th career 30-point season, joining Ryan Suter (13) as the only active defensemen to have 13 or more 30+ point seasons.
– Pheonix Copley stopped 28-of-31 shots for his 14th victory of the season and improving to 14-3-0 on the year. Since his season debut with the Kings on Dec. 6, no goaltender has more wins in the league than Copley.

The Kings are scheduled to practice tomorrow at 1:15 PM in Florida.