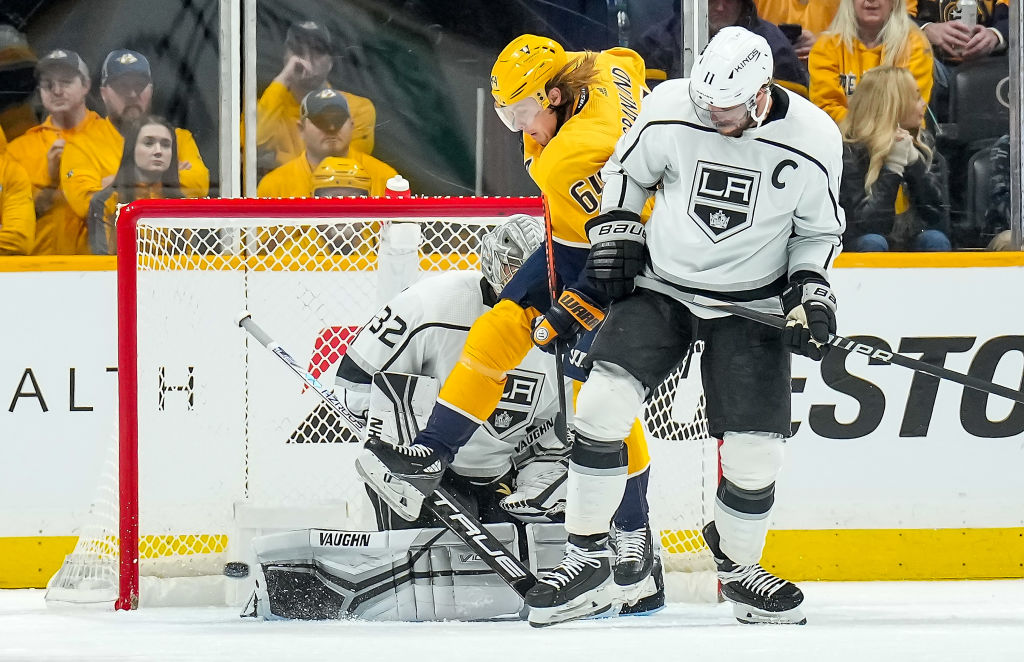 The LA Kings began a six-game roadtrip with a momentum-swing filled, 5-3 defeat on Saturday evening against the Nashville Predators at Bridgestone Arena.

Nashville opened the scoring with two goals in the game’s first 39 seconds to take a very early two-goal lead.

First, just 19 seconds into the game, forward Mikael Granlund deflected a point shot from defenseman Alexandre Carrier, past Kings netminder Pheonix Copley and in for his fifth goal of the season. Just 20 seconds later, forward Matt Duchene made it 2-0 Predators, as he worked his way to the slot and backhanded a shot by Copley. The Kings made a goaltending change after the second goal, with Quick entering the game in relief.

LA fought back through Durzi, however, who made it a 2-1 game midway through the first period. After he forced a turnover at the offensive blueline, Durzi stayed with the play and took a feed from Kopitar, which he buried through the five hole from the left-hand circle for his sixth goal and 25th point of the season.

The Kings flipped the script in the second period, as they took their first lead of the evening with a pair of goals.

First, Kempe took a perfectly weighted pass from Kopitar, drove the net and saw his rebound deflect off his leg and in for his team-leading 19th goal of the season and a 2-2 score. With just over two minutes to play in the middle stanza, Byfield put the Kings ahead with his second goal of the year. With the Kings on the power play, Byfield collected a rebound in the low slot, showed great poise to settle and spin, before he fired home the go-ahead goal.

The Predators scored three of their own in the third period to re-take the lead and eventually claim the victory.

First, on the power play, forward Ryan Johansen used a high deflection off a shot from the point, re-routing the puck past Quick and in to knot the score at three. Then, a Kings turnover led to a series of passes the other way off the rush, which forward Matt Duchene buried from the right-hand circle to put the Predators ahead 4-3. Forward Cole Smith scored the game’s final goal, another deflection, as he gave the hosts a two-goal lead inside four minutes to play, with the final margin of 5-3 the scoreline.

Drew Doughty
On battling back after the early deficit, but eventually coming up short in the third
We did an awesome job of battling back, down 2-0 right off the bat. We showed a lot of heart, a lot of courage, we played awesome and came back in the game, got the lead. We’ve got to be able to hold on to that lead. All three of the goals they scored in the third period were mistakes on our part, it wasn’t something nice they did, even the power-play goal, we know we’ve got to have that guy in high slot. It kind of goes on for every goal that we got scored against. There are mistakes and we know that, we’ve got to fix them.

On where he felt things went wrong in the third period
The coaches are harping on us, with a team like this, you’ve got to get pucks in behind them. Yeah, you’ve got to do that with every team, but this team’s neutral zone is very similar to ours and we know how hard it is when teams get pucks in behind us. I think we saw us not doing that in the third period enough and it caused a couple of goals against. That’s what happens when you don’t play the game plan.

On the spark Jonathan Quick provided when he came in
Yeah, I mean, Copper has been awesome for us, it’s too bad he had to get pulled. You always want to step up for your goalie when a situation like that comes up and then obviously we know how good Jonathan Quick is, so we were never worried about it. When he came in, we knew he was going to do the job and he made some huge saves for us to keep us with that lead. I wish we got the win for him because he deserves it.

Anze Kopitar
On the momentum swings in the game tonight
Yeah, for sure. Obviously not the start that we wanted, getting scored on, on the first two shifts. Battling back and taking the lead, but we just couldn’t sustain it. We’ve got to improve on some areas and get back at it tomorrow.

On the self-inflicted mistakes the group made in the third period tonight
In times like this, when you drop three in a row, you’ve got to look at yourself first and then go from there. If everybody just elevates their game a few notches we’ll be a lot better as a team. So, start with yourself and then expand and help each other.

On how he felt Quinton Byfield played and helped his line tonight
He was using the body a lot, I think he’s been he’s been playing really well since he got called up. We’re going to need him to continue to play like that.

Notes –
– Sean Durzi (1-1-2) registered his sixth goal and fifth multi-point effort of the season, as he eclipsed the 25-point mark on the season.
– Anze Kopitar (0-2-2) collected his tenth multi-point game of the season and 121st of his career on the road. Only four skaters have more multi-point efforts on the road in club history: Marcel Dionne (175), Luc Robitaille (134), Wayne Gretzky (125) and Dave Taylor (123).
– Adrian Kempe tallied his team-leading 19th goal on the year. Kempe now has six points (4-2-6) in his last five games.
– Quinton Byfield scored his second goal of the season, extending his point streak against Nashville to three games (3-2-5).
– The two goals against in the game’s first 39 seconds marked the second time this season a team has achieved the feat. It was the 15th time in NHL history a team has scored twice in the game’s first 39 seconds.

The Kings are not scheduled to hold a morning skate tomorrow, considering the back-to-back. The team will return to action tomorrow evening in Chicago at 4:00 PM Pacific.