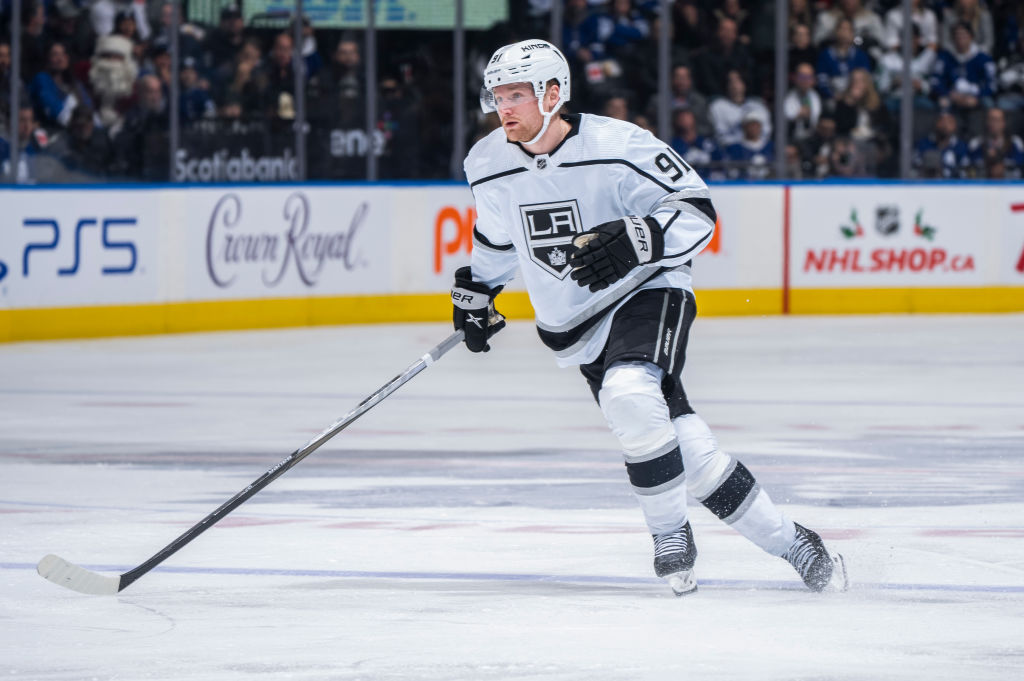 No Gabe Vilardi or Carl Grundstrom for the @LAKings Today.

Per Todd McLellan, Vilardi is day-to-day, while Grundstrom will be out at least through the All-Star break. Expect a couple reinforcements coming from Ontario between now and the upcoming trip.

The biggest news of the day, if you will, came in the form of individuals who were not in attendance. Forwards Carl Grundstrom and Gabe Vilardi did not skate for the Kings today. Did not see exactly what happened, but Grundstrom left yesterday’s practice a bit early and did not join the group today on the ice, with Todd McLellan confirming he was injured during that practice. Vilardi appeared to finish the practice yesterday, though did not skate with the group today.

Per McLellan, Vilardi is day-to-day, while Grundstrom is out longer term.

“Grunny hurt himself in practice yesterday, he’ll be out until after this long trip, he won’t make that trip. Gabe is just day-to-day.”

With Grundstrom set to miss time, and Vilardi on a day-to-day basis, it would leave the Kings with just 17 or 18 healthy skaters heading into tomorrow, which is at best the minimum to field a full roster, assuming Vilardi can play. AHL-Ontario is currently on the road in Colorado, finishing a back-to-back set this evening in Loveland against the Eagles. Ontario returns home tomorrow, before the Kings host Dallas, and the NHL club is scheduled to leave for a six-game roadtrip on Friday.

Even if Vilardi is healthy, would expect to see at least one roster move between now and then, with the Kings unlikely to head east with just six defensemen or 12 forwards. McLellan said as much today, noting that callups will come between now and Friday.

“Yeah, we will,” McLellan said, when asked. “We’ve been running thin, as you saw today in practice, we practiced quite thin. We want players to be playing at this time of the year, the Reign team is playing really well and guys are getting reps there, but we can’t afford to go to Eastern Seaboard with what we have. There will be more bodies coming.”

With a six-game trip on the horizon and the team leaving on Friday, naturally the Kings will not bring just 18 skaters with them on the plane, with McLellan saying as much. The trip is interestingly structured, with two sets of back-to-back games, but also two sets of two days off.

The Kings want that balance between maintaining a fully stocked roster, while also acknowledging that those joining the team could be younger players who need game repetitions to stay sharp and develop. While it’s a long trip, with long flights between home and where the Kings are, the structure of it does allow the organization to make adjustments on the go, should players become healthy or the team want to swap individuals out.

“We’ll have different needs, at different times, against different lineups,” McLellan added. “So, when we go on the trip, it’s not efficient, but we can flip players in and out, that’s not a big deal. We have two back-to-backs, which lead into two, two-day breaks after those games, so bringing a player to and from LA, or wherever the Ontario Reign are playing, it’s not a big deal on those days off in between.”

As it pertains to replacing Grundstrom’s toolkit, or perhaps Vilardi’s, McLellan called it situationally dependent.

Vilardi is a lineup regular on the third line with Blake Lizotte and Kevin Fiala, a line that has gelled quickly since it was united in Colorado in late December. With just 11 forwards on the ice today, hard to tell how the Kings might adjust and that adjustment could change in the short term and in the long term. Grundstrom has played just twice this month, including once due to an illness to Viktor Arvidsson, but he’s proven throughout his career to be adept and productive when coming into the lineup, making a valuable piece for the Kings. He also brings a skillset that differs from most with his hard-nosed, physical style of hockey.

“It depends on the individual, where he plays, who he’s playing with, the opposition coming in and how do they match up, especially when we’re at home, when we’re on the road, we don’t get that luxury anyhow,” McLellan said. “If you take Grunny, his value was in certain things that he did really well and we’ll look to replace that in his minutes, in his spot, as much as we can. Sometimes you don’t have that ingredient and you’ve got to replace it with something else, but that’s how we look at it.”

Worth a note tomorrow to see how the situation develops.

Practice Notes –
Todd McLellan indicated yesterday that much of the focus stemmed from “long” skating. While the Kings are typically not eager to share specific practice details, he noted that today’s skate had specific focal points as well, as yesterday’s did. McLellan had maintained in the days coming in that this break could be an opportunity for the Kings to work on certain things they may not have had the time for during the fast-paced start to the season. He is happy with how the group has been able to do that over the last two days.

“When we looked at practice, yesterday we put a foot on the gas and we went, it was almost like playing a game, our team needed that,” he explained. “Today, it was shorter numbers, quicker, but we covered all three zones, we covered a lot of special-teams stuff, stuff that we don’t normally get to work on, such as 6-on-5, 5-on-6, that type of stuff. It was time well used. That’s easy to say now, we’ll see what the results are as we go forward, we’ve got to get the engine going again.”

Without Vilardi and Grundstsrom, line combinations were scattered and as McLellan indicated, the team did a lot of work on special teams, which even threw off the jersey colors in an imbalanced way. When full-line combinations were used, it looked like different players skated with different players to account for only having 11 forwards. We’ll get a better indication of the alignment versus Dallas come tomorrow, as we get a better sense of Vilardi’s potential availability. Assuming we won’t see any changes among the defensemen, with the six available to them, but the forwards are definitely worth monitoring.

Looking ahead to the Dallas game, the Kings will be – for once – the team coming off of four days off and their opposition will be the team playing three games in four nights. You might think it to be a massive advantage, but teams with 4+ days rest this season are 34-26-3, a .563 winning percenatge. Not bad numbers, but far from a dominant total. McLellan indicated that even though a four-day break isn’t all that much, it’s still enough to see a team get away from that game mentality.

“It’s only four days, but remembering how hard it is to get things accomplished on the next game, you can’t just put your gear on and go play again,” McLellan added. “Dallas is going to play three games in four nights and sometimes that team that’s coming in and playing back-to-back, they’re ready to play, they haven’t even forgot what it was like to play and we’re trying to remember. That will be a challenge for us at the start.”

Morning skate coverage to follow tomorrow morning and we’ll go from there!