Not One, Not Two, Not Three……..A Look At The Kings Power-Play Success In Last Night’s Win! 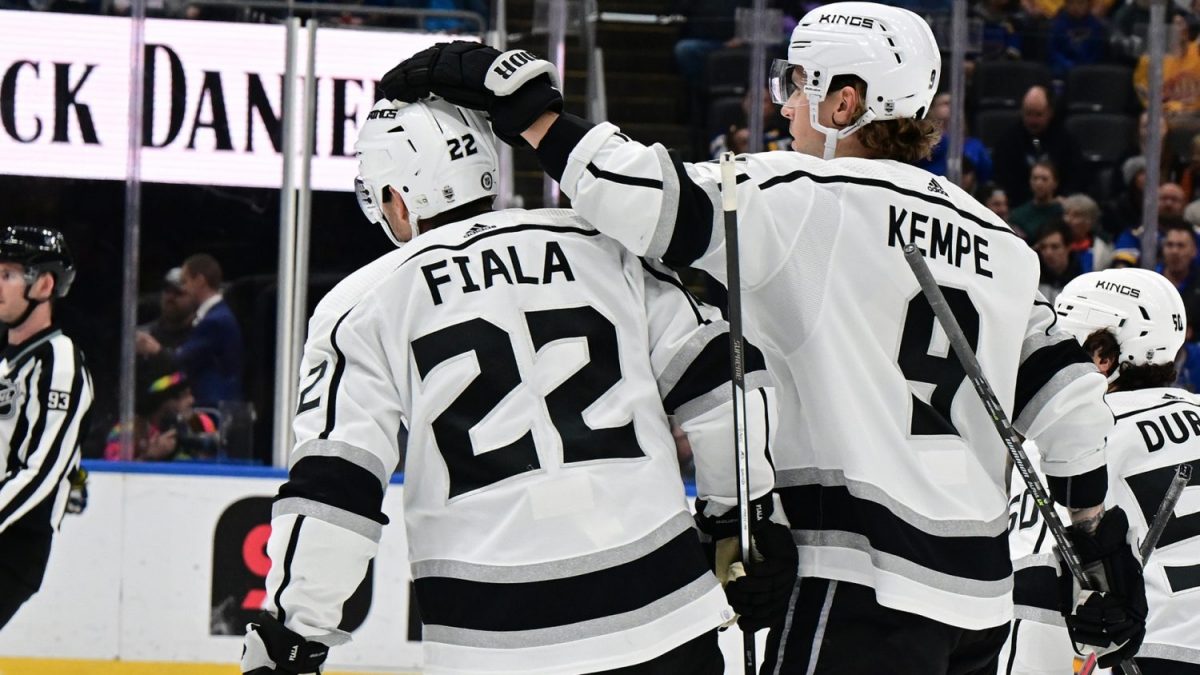 Coming out of last season, the Kings power play was perhaps the biggest topic of conversation on the negative side of evaluation. At a paltry 16.1 percent, the Kings posted their lowest percentage since the 2018-19 season and their third-lowest rate over the last 15 years, which ranked them 27th in the NHL, their worst ranking since the 2005-06 season. Despite it, the Kings were a playoff team that qualified within the division and pushed the Edmonton Oilers to seven games in the first round of the playoffs, despite being outscored 7-3 on the man advantage during that series. Were their unit league average…….makes you think, doesn’t it?

We’ve seen peaks and valleys from that unit here so far this season, but with a playoff rematch last night against those same Oilers, the Kings responded with four power-play goals – all from the top unit – in a convincing performance. On the other side of the coin was a 6-for-6 performance on the penalty kill, against the league’s best power play. Put it all together and the hosts had a 4-0 advantage on special teams.

It’s not necessarily the recipe for success the Kings thought they’d have in that matchup, and Head Coach Todd McLellan was upfront in indicating that it might not work next time, but the powerful power-play effort was key in the victory yesterday.

“Our power play has improved immensely from where it was,” Kings Head Coach Todd McLellan said. “We have two units that are dangerous on any given night and one of them seems to be clicking for different reasons. [Last night] it was Kopi’s unit.”

Diving a bit deeper into Kopitar’s unit and the four goals scored, two of them had similar tendencies. They were not the same goal by any means, but there were similarities in that both were one-timers by left-shot players, from the right-hand circle. What was interesting about the goals is that two different players scored them. With many teams, including last season’s Kings, you’d see players in firmer, preferable positions. The Kings still do have those preferred looks, but they have the ability to rotate as well, with players taking on different roles and different positions as a situation dictates. Last night was a perfect example of it in action.

“We’re all on the powerplay for a reason, sometimes I end up in the slot and I’m the d-man, it’s whatever happens, happens,” defenseman Drew Doughty said. “Every position is interchangeable. Obviously we have a plan for certain guys to be in certain spots, but we’re all on the power play for a reason because we can make plays all over the ice. It doesn’t matter where we are, we’re expecting to score.”

On the two one-timer goals specifically, which were scored by Kevin Fiala and Adrian Kempe, players were in different positions on the ice on the power play. On Fiala’s goal, he was on the right side of the umbrella, while Kempe was in the bumper position in the middle, from which he had the primary assist. On Kempe’s goal, Fiala was on the left flank, with Kempe on the right, as Fiala returned the favor. Both goals shown below for reference –

Is seeing the rotation, and the interchangeability between players in positions, a sign of the power play working as it’s designed for that unit? The players involved think so.

Fiala – Yeah, I think you have to go where you are and be able to interchange because it’s also very hard for the PK group, they always have to look around for where we are. It worked [yesterday], obviously, and I’m sure we’re going see again in the next game.

Kempe – I think it’s a good thing for me, Kevin, Kopi – and Gabe too – but especially me, Kevin and Kopi can switch and be the slot guy or be on either the one-timer side or not. I think that’s a good thing, especially on the break-ins, sometimes you end up in the wrong spot and takes some time to get back to your spot. You save some time just playing where you’re at.

An aside on Kempe’s goal – He admitted today he thought his former teammate, Jack Campbell, had robbed him at first glance. The puck was gloved by Campbell, but was later ruled to have been caught over the goal line. Kempe said that live, he assumed it was stopped, but once he got a look at it on the bench, he thought it had a chance of being ruled to be a goal.

“As soon as I shot it right away, I thought he saved it, I couldn’t see that his glove was in the net, so I thought he’d saved it for sure,” Kempe said this morning. “When I came to the bench and I saw the replay, I thought there was a chance, had to look that the entire puck was over, so I wasn’t sure the entire time. It went over, so it was a good feeling.”

As all three players put it, there’s an intention to rotate around positions in the offensive zone and a familarity with different players being in different spots makes setup much quicker for the Kings after gaining possession in the offensive zone. The Kings have one of the NHL’s best faceoff winners in Anze Kopitar and both Kempe and Fiala are excellent at gaining the zone through their skating and puck movement ability. Without as much reliance as getting into set positions, it could lead to additional offensive sequences over time.

A look at the other two goals shows an excellent individual play from Fiala, as well as another goal for the Kings off the rush.

Fiala’s second goal came large in part off his zone-entry capabilities, as he gained the zone, put the puck into the corner and went down to get it. He worked with Gabe Vilardi to free the puck up out of traffic, before he eventually took the puck to the net and made some magic happen from there.

“When he’s on, he can dominate games,” Doughty said of Fiala. “He’s very good, good vision, good shot, he’s one of the better 1-on-1 guys I’ve ever played with in my career. I thought he dominated [last night], he was unbelievable, he could have had 7 or 8 points, I thought. He was amazing [last night] and we’re very happy to have Kevin, that’s for sure.

The final goal was created by another bit of magic from Fiala with the pass and Kempe with the awareness and finish.

Todd McLellan shared in a conversation a week or so ago that the Kings do sometimes plan to attack off the rush, even on the power play, when the situation dictates it. It happened for the Kings in the win over Dallas last week, which required precise passing and situational awareness. The Kings got another last night, though this time it was on heads-up plays from Fiala and Kempe that caught Edmonton in a change, which sprung the speedy Kempe in alone on Stuart Skinner.

“I was going to change, it was 4-on-4 going to 5-on-4 and I saw they dropped to Kevin, saw Durz changing and saw that none of Edmonton guys really looked back at me to see where I was going,” Kempe detailed. “I was just trying to split the forward and the [defenseman] there in the middle and Kevin obviously made a great play, perfect timing. I was just trying to make something out of nothing and it worked out.”

McLellan noted that if you can score 4 or 5 of those kinds of goals over the course of a season, off the rush on the power play, it can really impact certain games and your unit’s overall numbers. Two in the course of four games certainly won’t hurt that cause.

The Kings will certainly hope to continue their run of special teams success here with three more home games on the horizon before a long trip heading into the All-Star break. The three opponents – San Jose, New Jersey and Dallas – all rank inside the NHL’s Top 10 on the penalty kill, presenting three difficult challenges upcoming. Executing the system and getting some elite, individual efforts along the way, will certainly help.