Hot out of the gates, Kings prospect Francesco Pinelli building momentum with OHL-Kitchener 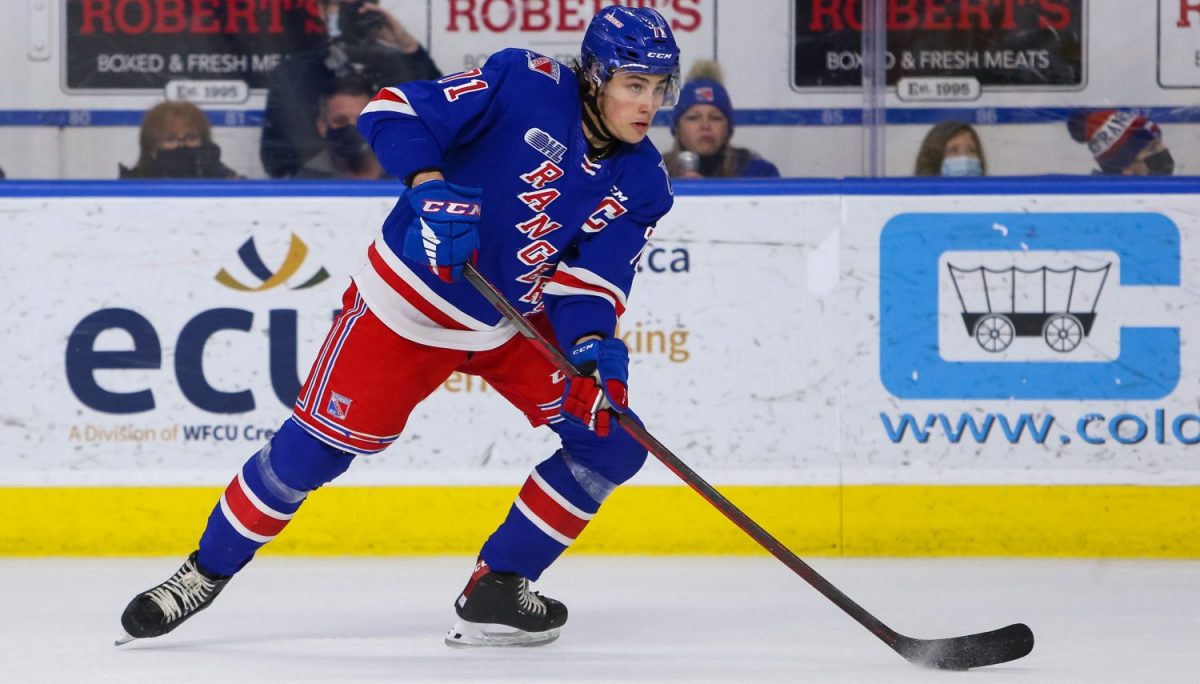 When Francesco Pinelli helped lead a seventh-seeded Kitchener Rangers team past the favored, second-seeded London Knights in the first round of the 2021-22 OHL playoffs, little did he realize that moment would help build the momentum that propelled him forward over the next seven months.

Back in May in the first round of the OHL playoffs, Pinelli and his teammates fought back from a 3-2 series deficit and moved onto the second round after an overtime road victory in Game 7. Pinelli, who wears the “C” for the Rangers, talked about the importance of that series victory for both his team and himself.

“It was a really big game for our team, winning in Game 7, it was good that we got past the first round and gained that playoff experience,” Pinelli said. “We’ve got that under our belts this season, so we know what to expect moving forward. It was growing experience for our team and myself personally.”

Though ousted in the second round of the playoffs, Pinelli’s confidence grew from the 2021-22 playoff campaign.

With eight points (3-5-8) in the first round and a pair of assists in the second round, Pinelli was able to take the positives from last season into an important summer, one that was built around improvement. Since Pinelli was drafted in 2021, one thing has become clear about who Francesco Pinelli is – he has a great understanding of who he is as a hockey player and he is exceptionally hungry to learn and be the best hockey player he can be.

With a wealth of self-understanding and a good head on his shoulders, Pinelli attacked the offseason ready to build off of what he and his team accomplished in the 2021-22 season. In doing so, he spent this past offseason in the gym and on the ice almost every single day, knowing where he wanted and needed to get better.

“Overall strength – I had to get stronger because players at the next level (AHL and NHL) are much bigger and faster,” Pinelli said of his offseason training. “Strength and speed are such big proponents at the professional levels, so those are two areas I really focused on in the offseason. I also worked on the details of the game too, like face-offs and rounding out my 200-foot game. I knew I had to work on all parts of my game to help me be a good player in every zone.”

In the midst of working on his game, Pinelli attended the Kings 2022 development camp with a sense of belonging, comfort and confidence.

It’s not that he didn’t feel good during his first year, but he showcased a lot of growth coming into his second camp, with the understanding of what he was coming into. That came through in his play on the ice.

“I knew what to expect going into my second development camp,” said the Kings second-round draft pick in 2021. “It was a really fun experience. Being able to see the players and the Kings staff again was really fun. To have the opportunity to come to camp and do pretty well felt really good.”

With that understanding of what to expect, Pinelli impressed at the Kings camp and showed growth in his game compared the year prior.

The staff recognized it as well. Mike Donnelly, a longstanding member of the Kings player development staff, signalled out Pinelli as a player who took massive steps forward from his first development camp to his second one.

“It’s harder for the younger guys when they come to their first development camp,” Donnelly said. “Frankie Pinelli, it was different for him this year versus last year. You didn’t really notice a lot of him [last year] and then in the scrimmage games [this year], you notice ‘wow he does have some really good stuff.’”

Just over a month later, Pinelli was back in Los Angeles for the Kings rookie camp, the annual gathering of the organization’s rookies heading into main training camp. After a couple days on the ice in El Segundo, as well as the Rookie Faceoff in San Jose, it was time for the full training-camp slate. Surrounded by much of the Kings present day roster, Pinelli soaked up the experience and played his way into one of the Kings preseason games.

Joseph Serpa buries the feed back door from #GoKingsGo prospect Francesco Pinelli as the @OHLRangers strike on the power play for a 1-0 lead!

Fitting in, it was clear that the work Pinelli put into the offseason had paid off and allowed the Stoney Creek, Ontario, Canada native to take another step forward in his young career.

“I just stuck to my game,” he said of his preseason contest. “I had a really good offseason, so I felt comfortable with where I’m at. I’m working to get better every day no matter the time of year.”

At just 19 years old, upon being sent back to Kitchener for the 2022-23 OHL season, Pinelli took with him the experience of an NHL preseason game and firsthand knowledge of what it means to be a good leader and role model.

Pinelli is in his second year of captaining the Kitchener Rangers, so he’s familiar with the additional responsibilities that come along with wearing the letter he does at the OHL level. While he already carries himself with maturity, exuding leadership traits, the opportunity to witness the way that NHL veterans such as Anze Kopitar carry themselves and operate on a day-to-day basis was a great opportunity for him to grow as a player and a leader.

“What really stood out about the Kings veterans was how they carried themselves around the rink,” Pinelli shared. “When they’re at the rink they were all so professional – taking care of their bodies, setting a good example off the ice and also on the ice by setting the tone of the practice. Things like that really stood out to me and that’s what makes a great leader. When I came in, Anze Kopitar took the time to welcome me. He’s a lot older than me, but he’s a super nice guy and a lot of guys of his stature can think they’re too cool for the younger guys. He’s the complete opposite and those kinds of little things we really appreciated.”

Now back in Ontario, Pinelli has taken the strides he’s made over the last seven months and in turn began the OHL season in great form. Despite missing one game earlier in the season due to illness, Pinelli is averaging well over a point-per-game and is on pace to shatter his career high in points that he set last season.

He collected an early-season hat trick and followed that up with a two-goal performance, on route to 17 points (9-8-17) from his first 12 games of the season, bolstered by two more helpers yesterday evening.

“We’re only 12 games in, but I think I’ve played some really good games and it’s been positive,” he said. “I’m playing well because I’m using my speed to my advantage and using my hockey IQ. Those are two big parts of my game where I feel I can take advantage of our opponents. I’ve also cleaned up my game in the defensive zone and I’m continuing to focus on that to become a consistent 200-foot player.”

Outside of the red, white and blue Kitchener Rangers jersey, the next threads Pinelli hopes to be representing are ones with a maple leaf on the front at the 2023 World Junior Championships.

Pinelli attended the summer showcase camp, alongside fellow Kings prospect Brandt Clarke, and his name has been included on the Team Canada’s roster on certain projections provided by members of hockey media. Whether it will be there or not come tournament time in late December when Team Canada announces their final roster is yet to be seen, but from the outside, it sure seems like Pinelli is doing the right things to be in the mix. 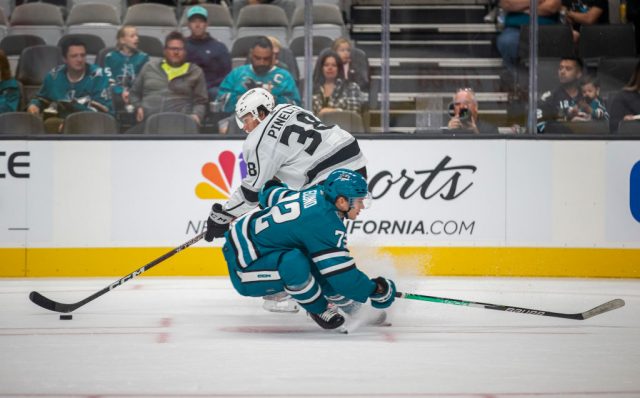