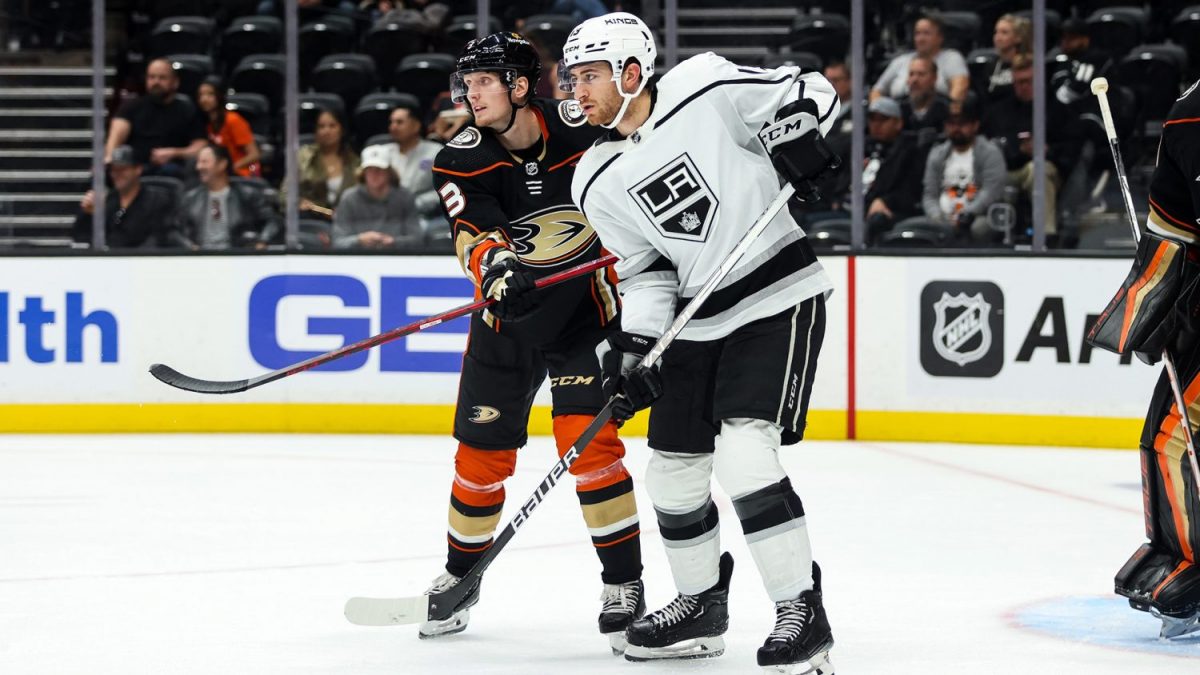 The LA Kings had their highest offensive output of the preseason Tuesday night in Anaheim, but were unable to hold a pair of two-goal leads and came up short to the Ducks at the Honda Center, losing 5-4.

Gabriel Vilardi led the way on the scoresheet, scoring each of the Kings first two goals of the evening, his first two tallies of the preseason. One came on the power play in the first and the other was unassisted during 5-on-5 play early in the second frame. Arthur Kaliyev and Tobias Bjornfot also got on the board for LAK in the middle period.

Anaheim worked their way back into the game during a back-and-forth six-goal second period and eventually earned the victory on a power play tally by Frank Vatrano just 51 seconds into the third period. The teams have now split the first two of three preseason meetings with the rubber game scheduled for Saturday night at Crypto.com Arena, the final exhibition for both clubs before the regular season opens next week.

Vilardi got the scoring started for the Kings after the halfway mark of the first by sweeping home a rebound to put LAK in front first. The goal came after an extended man-advantage shift in the Ducks end and had assists from both Adrian Kempe and Jordan Spence.

Anaheim evened the game less than three minutes later with a goal by Derek Grant that glanced off Spence on its way into the net, but the Kings went back on top early in the second on Vilardi’s second strike. After initially losing the puck coming off the back boards, Vilardi took it right back from Dmitry Kulikov and beat goaltender Anthony Stolarz with a quick wrist shot under the glove.

Moments later, Kaliyev extended the lead to 3-1 with his first goal of the preseason off a pass by Carl Grundstrom.

Max Jones got one back for the Ducks at 4:09 but it wasn’t long before Bjornfot netted his first of the preseason with a blast from the left point to put the Kings back up by two.

Anaheim’s fourth line took control of the game in the latter half of the frame, scoring twice in just over a two-minute span to even the game. First, Jones earned his second strike of the period before Pavol Regenda scored the tying goal 3:12 before the second intermission.

Vatrano gave his team the lead for the first time when he wired a puck to the net on the power play in the opening minute of the third and Anaheim never looked back, fending off multiple chances from the Kings in the closing minutes.

Cal Petersen played the full game for the Kings, appearing for the first time since leaving last Monday’s game in Vegas after just 20 minutes with a minor injury. In the netminder’s first extended action of the preseason, he stopped 27 of 32 shots.

Below are postgame thoughts from Head Coach Todd McLellan, Vilardi and Alex Edler.

Todd McLelllan
On if the game was easy or difficult to evaluate
Some good evidence that’s what you’re always looking for as a coach. I thought we started well and our game grew as the night went on. Got the lead into the midway point of the second and similarly to the game in in LA the other night, started to give it back a little bit and took four penalties in a row. That didn’t help; two of them were in the offensive zone. And then I didn’t like our overall team engine. We made mental mistakes and is that because of fatigue or is it because of shift length? That played a role in that as well.

On if some players are starting to separate themselves in a positive or negative way
I think it’s starting to happen, yeah. And that’s that evidence that we’re looking for. There’s guys that are elevating their games, there’s some that are falling off and showing maybe they’re not quite ready and then there’s some that we’re waiting for. And I think the ones that are elevating are great. The ones that are falling off, that happens. The ones we’re waiting for are the ones that have to get going. In fairness to them, some have only played two games. For whatever approach each team takes to training camp and how many games different guys get, we’re five games in and we’ve had key players that have only played two nights. We’ve got two more games coming up and we’ll try and get them in as much as we possibly can and we have to take that into consideration but a lot of teams in the league are like that too.

On the recent play of Vilardi
Well, one it looks like he’s having a lot of fun and I think that’s a huge part of it so give him credit for being enthusiastic and being excited and his teammates love playing with him right now that’s a real good sign. The way he’s using his body to protect pucks and keep plays alive. Power play, we’ve given him a bit of a new role and he’s accepting of that and he seems to be in command of it. There’s a lot of positives from Gabe.

On if he saw positives from the team’s play with the goalie pulled at the end of the game
Yeah, we kept some plays alive, we were in a position where we needed to be, we had some looks to the net. I think we won a face-off and we didn’t get through the goaltenders eyes which, at six-on-five, you better have somebody going through those eyes. So that was a disappointment, but the general structure for not having worked on it very much or at all was a carryover from last year and they did a good job there.

Gabriel Vilardi
On what it was like playing in a higher-scoring preseason game
Yeah it was a 5-4 game so a lot of goals, a lot of power plays, PKs, so obviously that’s going to create more opportunities. We’ve got to find ways to score goals so I mean it’s a good thing but we didn’t come out on the right end of it.

On how comfortable he is in his current spot on the power play
I’m playing the net-front, moving around, I’m just kind of reading off them and I’m trying to find open areas back door kind of like I did on the first goal there. Yeah, I’m comfortable there, just kind of tapped into them and just trying to get open on that back side.

On what it’s like playing with Danault
Very good stick. Like it’s a very high skill level that I don’t know if it’s undercover like very hard to see but when I play with him you really notice how good his stick is, how many pucks he tips, how any pucks are going out of the zone and he somehow knocks it out of the air and then he’s just a very smart player so it makes it easier on everyone he’s playing with when you’re playing with smart guys.

Alex Edler
On what needs to still come together before the games count towards the standings
We’re all trying to get ready for the season and trying to find out game, trying to find the chemistry and trying to execute our game plan and that’s what we have to continue to work on.

On where he feels the team is at with two preseason games remaining
I think we’re all pretty clear on what our game is and what we need to do and we showed a lot last year and what made us successful so that’s just what we’ve got to do.

On a late lengthy shift he had during the empty-net situation
Yeah, I mean it’s been a while since I was in that kind of situation. So it was fun, it was fun to be out there and be part of it. Too bad we couldn’t get one.

The Kings are scheduled to hold a practice tomorrow morning at 11:00 AM at Toyota Sports Performance Center. Then it’s off to Utah for the annual Frozen Fury game in Salt Lake City against the Vegas Golden Knights on Thursday at 6 PM.