Expectations – Defining Them, Internalizing Them, Meeting Them 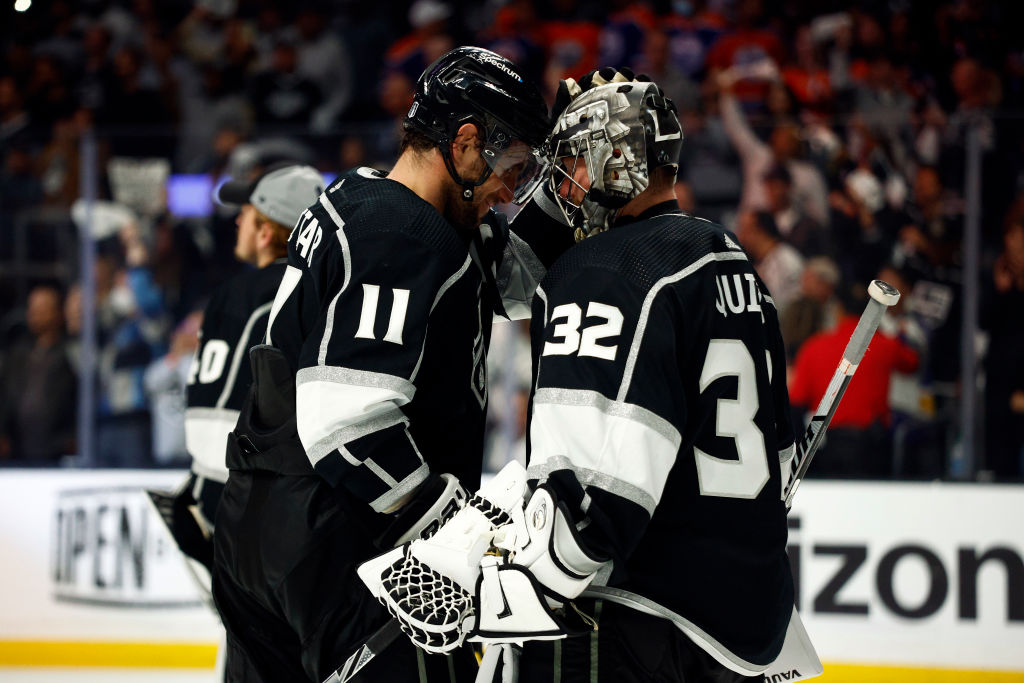 The theme of Day 1 of LA Kings training camp was certainly expectations. Defining them, explaining them, reacting to them.

We’ll start with the definition, because without defining exactly what we’re talking about here, the word expectations is exactly that – just a word.

“Pretty powerful word right now, expectation, in our organization and around the league,” Head Coach Todd McLellan said during his season-opening media availability. “I think I should talk about that word first because I’ve seen it fail a team in the past where pressure from the outside built up so much that a group of people didn’t respond to what was important inside, we spent more time worrying about outside. We’ve talked about that as a team already. Expectations are high within our locker room, within our organization, the expectations are realistic, they’re attainable, they’re not unreasonable, they’re our own. We’re responsible for them and we’re in control of them.”

McLellan didn’t mince his words when speaking after Game 7 in Edmonton last season, and again during Exit Interviews last May, when noting that this season will be different, more challenging in some ways, when it comes to experience and expectations.

The prevailing thought from today was that the expectations that matter are the ones that the Kings place on themselves as a team, as a group, within the walls of the locker room. It’s not about what others are saying on the outside, as much as we all like to debate expectations ourselves, but what the team is saying to and about itself, the standards that the Kings hold themselves to.

Still, those expectations need to be formalized and quantified in order to be met. The Kings are looking to take that next step forward, following the playoff appearance, and build what they accomplished into something bigger this season.

“You have to put some definition into those, for the media, for the fans and we’d like to take a step forward, we would,” McLellan added. “We took a big, big leap last year. We’d like to build on that and move forward, but internally what we expect from each other day after day after day is the most important thing.”

McLellan has seen first-hand a team take a step backward after a positive, feel-good season that resulted in a return to the postseason. He’s been determined since last season ended, mere minutes after Game 7 in Edmonton, to ensure that everyone is ready and prepared for the task, and opportunity, now ahead of the Kings.

First and foremost, McLellan is counting on his three veterans – Anze Kopitar, Drew Doughty and Jonathan Quick – to help manage those expectations, by keeping the focus inside the room, on internal expectations. Quick, for one, mentioned that exact notion during his own media availability, something that McLellan felt was strong in the notion of this group being able to handle that themselves.

“I don’t think there could be a bigger set of expectations on a group of players than after cup number one and then cup number two here,” McLellan said. “We have three players that lived through both of them. I’m sure they made some mistakes along the way, and probably learned from them, but we’ve seen Stanley Cup champs not even make the playoffs the next year. It doesn’t happen often, but it does happen and often that’s because they can’t handle expectations. We’re well equipped as an organization with those three in the locker room to help balance everything out.”

Kopitar and Quick all discussed the notion of expectations today, touching on what the Kings expect of themselves from an internal perspective and the goal of achieving them.

Kopitar – We’re obviously trending in the right direction. Last year was a big step for our team in making the playoffs, now there are more expectations and a little bit more noise around the team, but that doesn’t change a whole lot in here. We’ve got to get ready for the next few days and preseason games and we want to be ready as best as we can on October 11.

While he’s not concerned with what’s going on outside of the room, Quick is very much aware of the situation at hand.

He knows that the Kings are no longer a team that can sneak up on the opposition. They’re now a known commodity, and a team that has the spot that others are now coming for, as opposed to the other way around. It’s a challenge that he and the team are ready to face head-on.

“We hadn’t been a playoff team until last year, now it comes with a little bit of responsibility,” Quick added. “We’re not sneaking up on anybody. There are teams that in our division that want our spot and we’re ready for that challenge.”

From Doughty’s point of view, the expectations are what excites him.

Never one not to be vocal, Doughty was fully on board with his role throughout the rebuilding process, but that doesn’t mean it was easy for one of the NHL’s most competitive players to suffer through three consecutive losing seasons, without even threatening for a spot in the postseason.

Doughty wants to win and made that notion clear as the team was struggling. After a strong offseason in 2021, Doughty and other veteran players were happy with the moves made last summer, as the team added veterans Viktor Arvidsson, Phillip Danault and Alex Edler, all key pieces in the return to the playoffs. Those additions were only bolstered here this summer with the addition of Kevin Fiala. Armed with what he believes was the biggest step taken yet, the excitement was palpable for the veteran defenseman following the first day of training camp.

“I couldn’t be happier,” he said. “Obviously, when it first happened and they said we’re going to rebuild, it wasn’t a good time, a few years there were not a good time but every year since then it’s been an improvement and it just makes you want to come to the rink more, want to compete harder, and this year is definitely the biggest step we’ve taken, in the offseason anyways. It’s the biggest step we’ve taken and I’m really excited to see what our team can do this year. I think we all have pretty high expectations for ourselves.”

A long road ahead, but if Day 1 is any indication, the Kings appear to be on the right track towards handling the enhanced expectations coming their way. With their sights set on improving upon their performance last season, that’s certainly a good thing for this group.