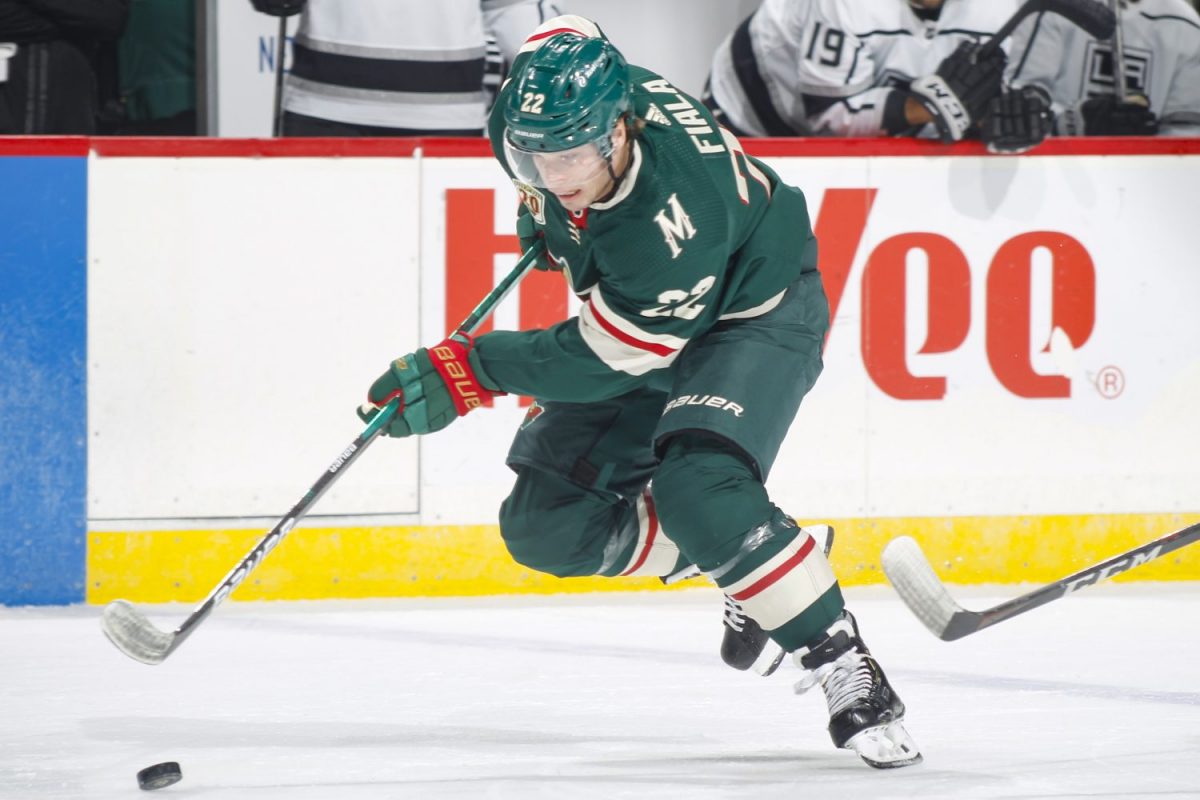 “I’m very, very excited to join the Kings, I couldn’t be happier with that.”

Kevin Fiala is the excited, new man on the block and an important add he was for the LA Kings.

Fiala fills a glaring need for the organization. It’s not a need that arose suddenly, but rather a need that has eluded the Kings for some time. Kings General Manager Rob Blake noted that he has been in search of a player of Fiala’s ilk dating well past this offseason, but that players like that don’t come available all that often. When one did, due to complications with the salary cap in Minnesota, Blake was sure to pounce, acquiring the 33-goal scorer and extending him on a seven-year contract.

“I think we understood a need for scoring, dynamic scoring, playmaking ability, puck possession, a lot of the different traits and attributes that Kevin possesses,” Blake said via conference call earlier today. “We had identified a need during the season and there aren’t a lot of times players like that come available. We were fortunate enough to be able to get in, get a deal done and get Kevin with us.”

Blake noted that the trade overall took around 10 days to complete, but initial calls around the league started much sooner. Blake estimated that around the conclusion of the second round of the 2022 Stanley Cup Playoffs and into the conference finals, he began to make calls around the league to assess certain situations and players who might become available.

From his experience, those calls aren’t anything out of the ordinary but they helped provide a baseline for the Kings to go off of. Blake identified a top-six, scoring forward as a position of need and that recognition dated well beyond this offseason. Once Fiala was in play, Blake saw the opportunity to make what he called the biggest improvement the team will make this offseason.

“We knew we had an opportunity to get a player of Kevin’s caliber and that goes to the forefront right away,” Blake said. “We were going to make sure we got that in place and that would be the biggest improvement to our team.”

While he didn’t know which team exactly he would be improving, Fiala had a pretty good idea himself that on opening night in 2022, he would likely be playing for a team other than the Minnesota Wild.

When the Wild made the decision to buy out the contracts of Ryan Suter and Zack Parise last offseason, it created a cap crunch for the team moving forward, one that more or less ruled them out from being able to extend Fiala long term, despite his dynamic 2021-22 season, one that saw him exceed 30 goals and 80 points. Fiala did his best to focus on the situation at hand – and whatever he did certainly worked – but in the back of his mind, he knew that, as a restricted free agent in line for a sizeable extension, his future likely rested elsewhere.

“In the season, you don’t think about it, you just play hockey, but in the back of your head, you’re kind of wondering what’s going to happen,” Fiala admitted. “I didn’t really let it bother me in the season, I just tried to have fun with the guys and just tried to win some games. That was my main focus.”

Fiala’s breakout campaign was apparent from several metrics. He posted career highs in goals, assists and points, surpassing 30 goals, 50 assists and 80 points for the first time at the NHL level. While not exactly sure what was the biggest reason for his jump in production, shooting the puck, both for quantity and quality, certainly had something to do with it.

Fiala’s shots on goal on a per/60 basis were the highest totals he’s posted in the NHL, while his total shot attempts were second-most, just shy of his best season in Nashville. While the quantity was up, so was the quality. With 10.83 scoring chances per/60 , Fiala posted the highest rate of his career in that department and at 4.86 high-danger chances per/60, Fiala again placed just shy of his 2017-18 campaign in Nashville. More shots combined with slightly more ice time, and a slightly higher shooting percentage, and the results were evident.

“I had a big goal at the beginning of the season and I thought it was important to take the next step and be an all-around player, play better defensively, play some PK minutes and offensively, I had a great season with points and stuff,” Fiala said. “I don’t know [what was different] but it went pretty well. I think I focused on shooting a little bit more, even from bad angles, just getting to the netfront on some tips. I thought I got better and better as the season went on. I think if I’m at my best, I’m around the net a lot so that was the key to the success this season.”

Fiala also noted that while he is an offensive player first, he’s also not one to shy away from physicality and is working to become a better all-around contributor.

Defensive responsibility is important in Todd McLellan’s system, but Fiala has the physical tools through his speed, skill and willingness to go into the corners to succeed in that system. He’s working to round out his 200-foot game, including his defensive play, but made sure to point out that he likes to get physical on the forecheck, play in the corners and use his ability in that way as well, on top of his speed and skill.

“I think I am a skilled player, an offensive guy, but I like to be in the corners and when I’m at my best, I’m using my body and creating well,” he said. “I’m not a huge hitter or anything like that, but if there’s a good hit to be made I’ll make it, otherwise I feel like I’m an offensive guy, but also getting stronger and stronger defensively.”

Fiala noted that several of his new teammates have already reached out to welcome him to the organization. He’s familiar with viktor Arvidsson, one of last summer’s prized acquisitions, from their time together with the Predators. While he doesn’t yet have any personal relationships beyond that, the hockey community is a tight one, on where everyone knows of everyone, so he’s certainly familiar with those he’ll line up alongside this season.

He’s already off to a good start getting acquainted with those who reached out, and will surely see more and more of that as the summer goes on.

While he didn’t name any names, two players Fiala was asked about were Anze Kopitar and Adrian Kempe. Fiala was quick to point out that one, there is a lot of time between now and training camp, and two, he doesn’t control who he plays with, but he still touched on the prospect of partnering Anze Kopitar and Adrian Kempe on a line together. Fiala was never utilized on the first line in Minnesota, despite his production, and could be in line for a top-six opportunity here with the Kings. Kings fans have certainly already dreamt of the possibilities that line could create, and Fiala was complementary of two of his new teammates.

“You never know with who you might play, that’s a long way to go, but those two are great players,” he said. “Kopitar has been in the league for a long, long time, he’s won Stanley Cup, he’s done it all and Kempe had an unbelievable year last year, he’s rising. I’m very excited if I do get a chance with those two guys and we go from there.”

As he departs the State of Hockey, Fiala left with nothing but good things to say about the Minnesota organization and about his now former teammates. He had clear bonds with members of that organization and it’s from that aspect that he will miss playing there, the people.

“This is just a great opportunity and a great organization,” Fiala said of the Kings. “I see the team coming up, made the playoffs last year and they have a great group of guys I’ve heard and on the ice they’re just getting better and better. There are some great young players coming up and the future is bright, I felt like. I’m very happy with this.”

– With Fiala acquired and signed, the priority is now signing Adrian Kempe, with the Kings wanting to do that “right away”, per Blake. Once Kempe is signed and his AAV is known, Blake will have a better sense of exactly how much room their Kings have to potentially add via unrestricted free agency.
– Blake said that defenseman Sean Walker is cleared to return from his knee injury and is expected to be ready for training camp in the fall.
– In terms of the left side of the blueline, Blake indicated that the Kings are potentially interested in bringing back one of Alex Edler or Olli Maatta, as noted here earlier this summer, to fill the right role. Blake also said that a player like Walker or Sean Durzi could open up training camp on the left side with the Kings having so many, capable, right-handed defensemen, with Walker likely the first option there.
– We’ll cover this with a longer story over the next 48 hours, including thoughts from Mark Yannetti, but Blake indicated that all options are available on Day 2 of the draft. Depending on who might fall, the Kings could look to move up for someone they want in Round 2, but could also trade back for additional capital if those players aren’t there. All depends on situation, and that starts with how Day 1 shakes out. Yannetti said he doesn’t see the Kings moving into Round 1 without sacrificing future assets, but with so many assets at their disposal, you never know what might happen.

Good night to you, Insiders. Officially touched down in Montreal in advance of the draft in two days time. Much more to follow here from one of the marquee events of the summer, with more thoughts from Blake and Yannetti to send us off from here.