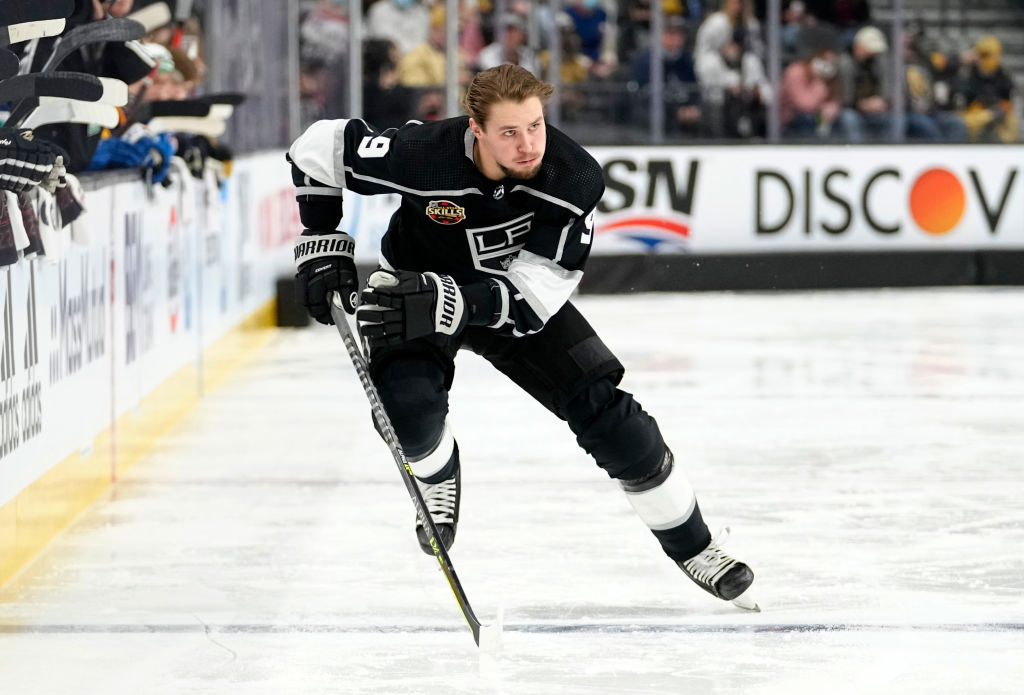 From a forward with a new contract extension in his back pocket in Blake Lizotte to a forward in search of a new contract in Adrian Kempe, the season in review series rolls along this week. Kempe was a first-line forward for the Kings this season as he established his presence as a goalscorer for the first time, surpassing 20, 25 and 30 goals for the first time as he finished with 35 in total. A huge season for Kempe, with the ups and downs below.

Adrian Kempe broke out as a goalscorer, putting together many of the tools we’d seen from him over the years, and turning those tools into offensive production at the highest level of his NHL career. Kempe led the team in goals this season, as he set career highs in both goals and points. With a strong season offensively, producing with goals both at even strength and on the power play, as well as providing his same level of two-way play, Kempe was everything the Kings could have wanted and more during the 2021-22 season.

“I [saw] him putting it together,” Todd McLellan said of Kempe midseason. “In the past, he could put up a big load of goals, and then it got away from him. Now, it seems to stay there, it’s fairly consistent. He found a good home with Kopi on that wing, he’s playing the right way and to me, his energy level, confidence on the ice, the way he carries himself on the ice, that energy is always there. I’m not sure it was always there in the past. He believes in his game right and teammates believe in him.”

Trending Up – First things first, Kempe had a breakout season offensively, as he led the Kings with 35 goals. Kempe became the first Kings player since 2018 to net 35 goals (Anze Kopitar) and no player has scored more in a single season since Ziggy Palffy back in 2002-03. Kempe’s 26 goals at even strength were the second-most by a Kings player since 1993, trailing only Kopitar’s 2017-18 campaign.

One way to score more goals is to……shoot more pucks! Kempe’s underlying metrics show career highs in attempts and scoring chances to match his uptick in goals scored. Kempe set career highs on a per/60 basis in shot attempts, scoring chances and high-danger chances, indicating that his shooting measured both by volume and quantity was up from past NHL seasons. Kempe also ranked second on the Kings in rush attempts per/60, trailing only Viktor Arvidsson, a trait that sees the eye test match what the numbers are telling us – a dangerous player moving with the puck in transition. At 5-on-5, his shooting percentage actually dropped from last season, with his 10.76% this season the third-highest of six seasons. An outlier goal total can sometimes be inflated by an unsustainable shooting percentage, but Kempe’s percentage falls right in line with his career to date. That’s a good sign.

Kempe was also a player who continued his production into the postseason. Kempe led all skaters with six points (2-4-6) from seven games played and scored the team’s biggest goal of the season, the overtime game-winning goal in Game 5 that put the Kings ahead by a 3-2 series margin. Kempe was also a top-three player in shot attempts, shots on goal and scoring chances in the series against Edmonton, things that carried over from regular-season play to postseason play, as Kempe produced as expected in his second taste of the Stanley Cup Playoffs.

Kempe also earned his first nomination to the NHL All-Star Classic, representing the Kings at the league’s midseason showcase. It was nice to see Kempe’s season rewarded with some recognition and the speedster earned himself second place in the fastest skater competition during the skills competition.

Trending Down – Kempe is a strong, two-way forward who led the team in goals, but he also ranked towards the top of the list when it came to on-ice goals against. Kempe was third from the top of the list in terms of on-ice goals against on a per/60 basis at 5-on-5 and had one of the lower rates in GF% amongst regular forwards. Much of that stems from an abnormally high number of high-danger goals against and actual totals that fall below expected totals. His PDO of .970 was the lowest amongst regular forwards, perhaps explaining some of that disparity, but the goals that went in count all the same.

If viewed as a negative, Kempe ranked tied for fourth in the NHL in empty-net goals this season with six, though those in his company at the top of that list include some of the NHL’s elite goalscorers. Kempe also had two overtime goals at 3-on-3, six goals on the power play and three on the penalty kill. If you add up everything, it amounts to 17 goals at 5-on-5, which is only three more than his 2017-18 season. On one hand, it shows Kempe’s expanded role and versatility, but on another, it leaves one area for improvement, which is scoring more during the run of play at 5-on-5.

2022-23 Status – Kings General Manager Rob Blake deemed Adrian Kempe’s contract the organization’s number-one priority this offseason, with both team and player indicating an interest in coming to terms on a new contract.

Kempe is a restricted free agent and the makeup of his contract is certainly an interesting one. With one year left of team control, how the two sides progress both on term and on length is one to watch for. Assuming that happens, Kempe will find himself back in a top-six role next season, as the team’s leading goalscorer. With a 35-goal season now on his resume, Kempe has become an important part of what the Kings are trying to build and is certainly in line for a raise off of his current $2 million per season contract. We’ll see how he builds on that performance with another season ahead.

Closing out the week we’ll take a look at Kempe’s center, Anze Kopitar, in the next edition of season in review.