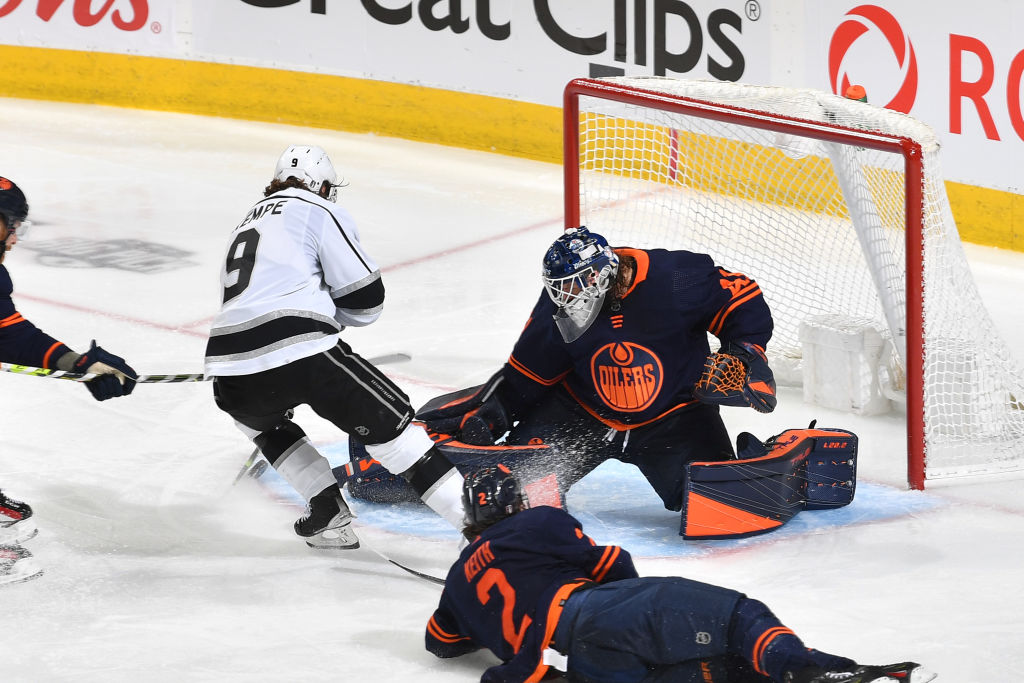 No time and a half pay for games that go beyond the regular 60, but after that finish I won’t be filing a grievance. Apparently, no one told Adrian Kempe that overtime was played 5-on-5 in the postseason, so he tried the same move that he won the game in Montreal on back in November. It didn’t seem to matter, though. Kempe showed off the same qualities he has all season, with speed, strength and a knack for a timely goal. The overtime hero during the regular season on two occasions added a postseason tally to his record during last night’s Game 5. As Todd McLellan said after the game, there’s no one on the team he would have rather had with a head of steam down the wing against a pair of tired defensemen. Kempe entered the night with just two assists in the series but left it a point-per-game player off of a massive three-point night.

Though Kempe ended the game on the second shift of the fourth period, what was so impressive to me was how the Kings started overtime. It was basically like a new game as overtime began and if you’ve been following along, you’d know that the Kings have started every game in this series well. The first period has been the Kings period in each of the five games played and now, the only fourth period to date in this series has been the Kings period as well.

“The break helped, reestablishing our game helped and the starts have been good for us,” McLellan said. “We have a plan, we executed it for the most part and it was like a new game at 4-4.”

It all started in the extra session with the Phillip Danault line. That unit went out and set the tone off of the first puck drop. A strong shift in the offensive zone, one that controlled the puck and created several shot attempts, with the Kings having five scoring chances in 72 seconds of the extra session. That momentum rolled over from line to line, with the Kings sending out the Kopitar line immediately thereafter. Edmonton was unable to change its defensemen, as the pair was forced to stay out for over a minute during the offensive onslaught, and Kempe took eventually took advantage.

The impressive nature of the start came after a frantic end to the third period. In many ways, the Kings were happy to get to overtime. McLellan talked about how the Kings played hard enough and well enough to earn that opportunity, as the third period was certainly a momentum shift in favor of Edmonton. The intermission, however, offered the Kings an opportunity to reset as a group, with veteran leadership prevailing and setting the stage for what happened next.

“We were up 4-2 and they came back, they had some momentum going into overtime, but we were talking about it in the locker room that we’ve got to stick with it,” Kempe said. “Whatever happened, happened already and we have to reset our mindset here, go out and win a game. [The Danault line] went out right away and set the tone and then we caught then when they were tired and finished it off.”

As Danault told us after the game, if you had offered the team a 2-2 series tie, and overtime in Game 5, before this series started, the Kings would have taken it. That speaks to a few things. One, it would have been a validation of the approach the Kings have taken, winning twice to place them just one shot from taking a 3-2 advantage. Two, it would have meant success playing on the road during the postseason, which fits the profile of this season’s team, but is sometimes elusive at this time of the year. Maybe more importantly than either, however, it would have meant that the Kings were in a situation they’re comfortable in. We’ve talked for pretty much the entire second half of the season, and into this playoff series, about how comfortable the Kings are in one-goal games. In this case, it was a tie game. Despite the magnitude of the moment, which for many players on the ice was their first experience with playoff overtime, the Kings have been in tightly-contested, high-pressure situations all season long. They stuck to their identity right off of the first faceoff in overtime and showed that the moment was not too large for a group that’s had their fair share of them this season.

We’ve only really talked about Kempe’s offensive contributions in this article, and rightfully so, because he had a huge night. But how about the mantra of this team all season – next person up. Andreas Athanasiou, out of the lineup in Game 4, stepped back in with a poised goal in the second period, pushing the Kings ahead 3-1 through 40 minutes. Athanasiou’s poise was only outmatched by Dustin Brown’s, who showed great calmness with the puck after forcing a turnover to hit Athanasiou for the goal. How about Troy Stecher……again? Stecher scored the game-opening goal, one game after he scored in his Kings postseason debut on Sunday. Stecher was the only move the Kings made at the trade deadline that impacted the team at the NHL level. Acquired for just a seventh-round draft pick, Stecher was not a part of the lineup for Game 1 but has since worked his way into the rotation on a regular basis. Providing offensive contributions and stability alongside Alex Edler has been a welcomed boost on the backend.

The Kings now head home with a 3-2 series advantage, with the opportunity to win on home ice and advance to the second round. If the Kings would have taken the 2-2 split, they certainly would have taken the 3-2 advantage heading home. The crowd in Los Angeles only got more animated as Game 4 progressed, setting the stage for what is sure to be a raucous atmosphere and energy level for Game 6 on home ice.

The Kings are well aware, however, that the job is not done and we’ll dive a bit deeper into that later on today. McLellan made the point clear though that the Kings have work to do in this series and must continue to raise their level of play in Game 6 from what they brought in Games 4 and 5. It’s the team that improves with each game that will win the series, meaning that the Kings have yet to reach that level yet. One more gear to find, one more game to win.

No practice for the team today, as we prepare our travel home from Edmonton later on today. With a mid-afternoon arrival, we’ll gear up for Game 6 later on today, with a feature story to follow, as well as some Ontario Reign content to follow as well as the Kings’ American Hockey League affiliate begins its own second-round series tonight in Colorado.

“Edmonton Oilers defenseman Darnell Nurse has been suspended for one game for head-butting Los Angeles Kings forward Phillip Danault during Game 5 of the teams’ First Round series in Edmonton on Tuesday, May 10, the National Hockey League’s Department of Player Safety announced today.”

Nurse has been Edmonton’s leader during both the regular season and playoffs in minutes played. Nurse will not play in Game 6 tomorrow evening, but would be eligible to return for Game 7 on Saturday, should that game be necessitated.