In a 1-1 Series, “Underdog” Kings Ignore Outside Expectations, Excited for Home-Crowd Passion 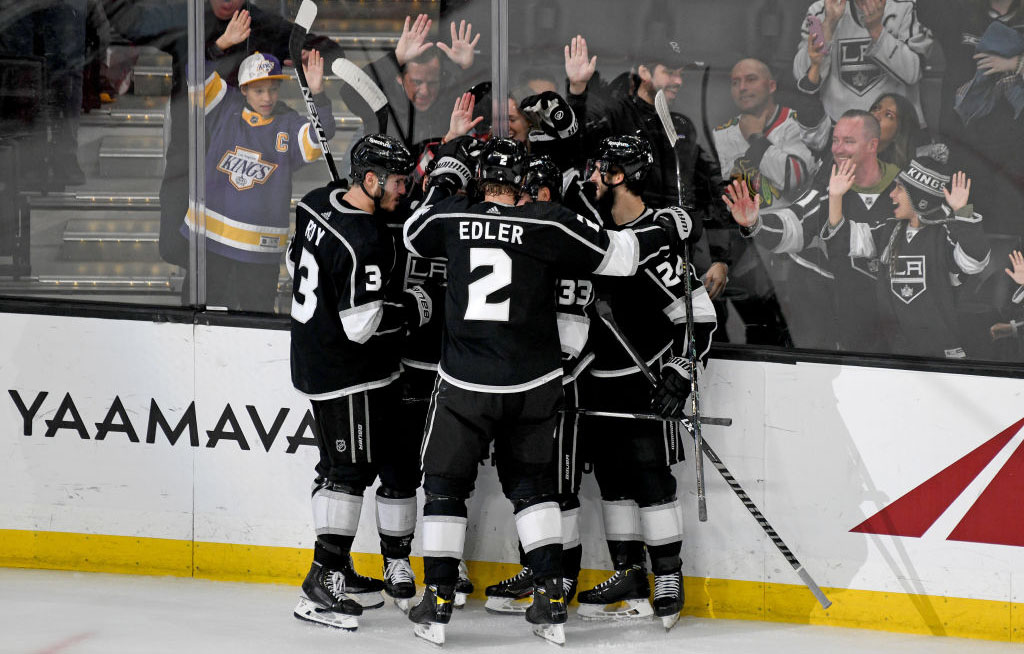 It’s a new day for the LA Kings, a day that follows one centered around travel, rest and recovery. With two games in the books, the series has shifted from Edmonton to Los Angeles and the two teams have begun their preparation for Game 3 this evening.

The two games in Western Canada told vastly different stories, stories that have intersected at a 1-1 series heading into the first NHL playoff games in Downtown Los Angeles since 2018. Game 1 was one of identity from a Kings point of view, with crisp passing, forcing turnovers and the right combination of speed and puck control in all three zones. The Kings were not able to establish that same style of play in Game 2, with Edmonton’s advantage on special teams coming to the forefront with two power-play goals and a shorthanded tally, bringing its total to five in total throughout the series to date.

Looking at the bigger picture, a split on the road is never a bad result in a best-of-seven series. Naturally, you want to get two wins if you could, but everyone knew going in that there would be bumps in the road and losses along the way. Anyone assuming otherwise off of an emotional win in Game 1 was mistaken.

“It’s a seven-game series,” defenseman Matt Roy said. “I think we knew going in we weren’t going to go 16-0 in the playoffs. We just need to put it behind us and move forward.”

There will be challenges and adversity to overcome throughout what the Kings hope is a playoff run, and there was certainly a decent dose of it coming out of Game 2.

With that one now behind them, it’s a series tied at one and home-ice advantage has shifted in favor of the Kings beginning tonight.

“It’s a series and we came [to Edmonton] and got the split,” Kings captain Anze Kopitar said after Game 2. “Obviously we wanted to get two, but not everything is going to be perfect. The series is tied, we’re going home, we should be excited and we are excited to bring it back to LA at 1-1.”

Getting the win in Alberta was important for the Kings for a few different reasons, especially considering the identity win in Game 1. The Kings showed that they can successfully play their brand of hockey in the playoffs, an unproven theory coming in. This group hadn’t experienced the postseason together yet and the hardworking, relentless style on that night was the recipe for success.

They also showed no fear heading into the environment they experienced. They did a good job of quieting the crowd at key moments in Game 1, eventually finding a late goal to earn the win. Now, off of Game 2 where that was not the case, the Kings are happy to be home, despite not getting the desired outcome two days ago. 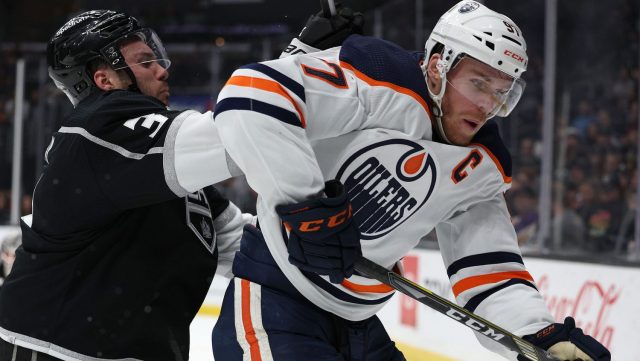 The Kings have indeed been a confident and resilient group all season long.

Losses haven’t bogged them down, as they’ve embraced the cliché of remaining level-headed, handling the ebbs and flows, the ups and downs as best as they can. Since the start of December, the Kings have lost consecutive games in just five stretches, over the course of 61 games, with no more than three straight losses in that span. With each game that much more magnified at this time of the year, playing a best-of-seven as opposed to a best-of-82, the onus on continuing strong play in those situations is as important as it’s ever been.

“We seem to be pretty quicker learners,” Kopitar added. “We’ll look at it, make some adjustments, address some things, improve on a few areas and get ready for Game 3.”

Regardless of the shift in setting, most are still picking the Oilers to win the series. Yesterday, The Athletic’s national team placed the Kings at the highest “worrying” level of any team in the postseason after the Game 2 defeat.

McLellan and the Kings know about external predictions, but they also don’t feel that playing with house money, as you might put it, means you’re eager to lose that cash either.

With that in mind, you might think that all of the pressure lies on the Oilers, even after the convincing victory on Wednesday. Heading into that game, the pressure on the hosts was massive, and they answered. The Kings, though, have a different type of pressure on them than the Oilers do. There’s very little external pressure, but there’s a lot of pressure internally to produce in these games.

The Kings aren’t here so that the field adds up to 16, they’re here to do their best to win games and win a series.

“The pressure that we put on our team is maybe a little bit different than what Edmonton has,” McLellan said. “No one picked us, and that’s okay, this team has won two cups being the underdog, but that doesn’t mean we don’t put pressure on ourselves in the locker room. The internal pressure that individuals are putting on each other, you couldn’t ask for anything better for our organization right now.” 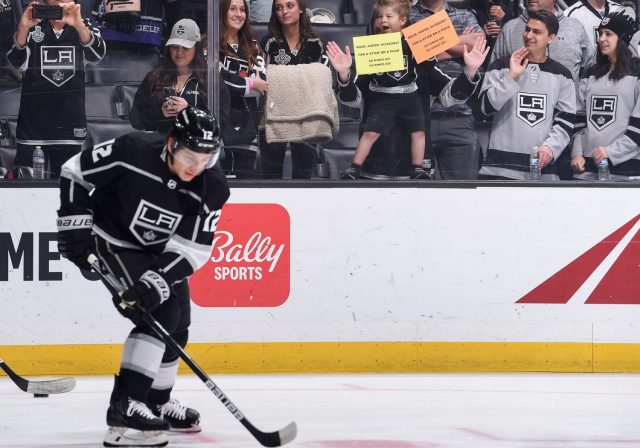 Now, the scene shifts back to Los Angeles, where what will surely be an energetic barn awaits them on Friday.

Eight members of the Kings got their first taste of the Stanley Cup Playoffs on Monday inside a sold-out Rogers Place. That atmosphere was excellent, with McLellan knowing that better than anyone, both from his experience in Games 1 and 2 and also from a two-round playoff run as the Head Coach of the Oilers back in 2017. McLellan was quick to point out when asked that he’s expecting the same level of intensity, noise and passion in Southern California.

McLellan has coached in Los Angeles as well, as a visiting coach during the playoffs, noting how uncomfortable of an environment it can be for teams coming in at this time of the year.

“I’ve faced the Kings multiple times in the playoffs, we had to go into their building and that wasn’t very comfortable,” McLellan recalled. “We’ll have a fan advantage, a passion-level in LA that rivals what we have [in Edmonton]. The true LA fan is just as passionate about our team and our game down there, so we’ll have that advantage down there.”

Home ice advantage has now swung from the Oilers to the Kings, who now have three of the final five scheduled games on home ice with Games 3 and 4, as well as Game 6 should the series extend that long. Come the postseason, having home-ice advantage is great, but it only matters if you do something with it. Edmonton is a capable road team, with the NHL’s second-best special teams away from home during the regular season, the Achilles heel for the Kings in Games 1 and 2. A big test awaits.

The Kings won their last three regular-season home games at Crypto.com Arena, all meaningful wins in locking up a playoff berth. Now, with Game 3 set for this evening, it’s about taking that excitement and energy in coming home and translating that to the performance on the ice. As the captain put it, just get it done.

“It’s time to go home and take care of business.” 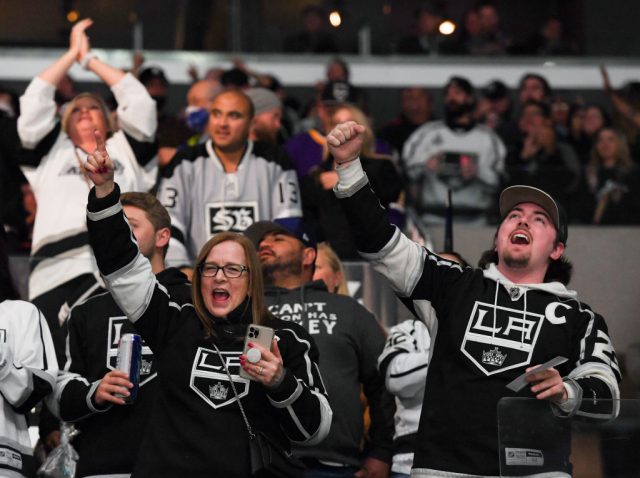