A “humbled” Blake Lizotte embodies the qualities of the Masterton Trophy 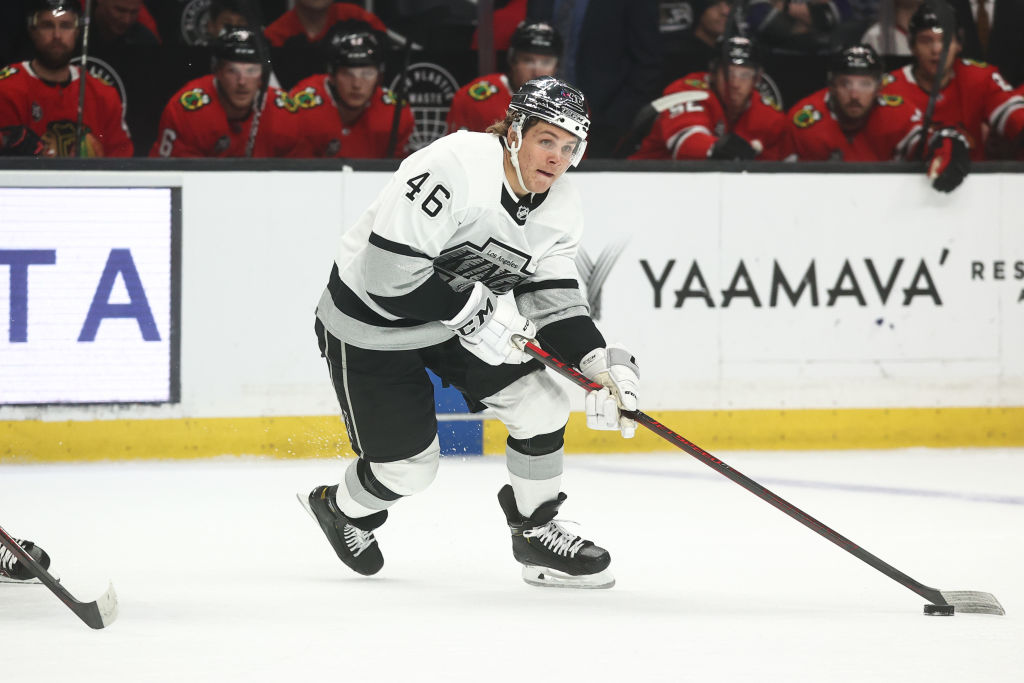 “In this league, you never stop proving yourself, you’re only as good as the last shift you played.”

Hard to think of a more perfect sentence to describe Blake Lizotte than that one.

It was Lizotte himself who said it, demonstrating a great understanding of his situation, his role and his skillset. For those reasons, amongst several others, Lizotte was selected yesterday as the LA Kings’ nominee for the 2022 Masterton Trophy, as voted on by the Los Angeles based members of the Professional Hockey Writers Association.

The Bill Masterton Memorial Trophy is awarded annually to the National Hockey League player who best exemplifies the qualities of perseverance, sportsmanship, and dedication to ice hockey. The award is named after former Minnesota North Star Bill Masterton, who was the only player in NHL history to pass away from injuries sustained during a game.

Each of the league’s now 32 teams has one honoree recognized by their local media, with the top three vote-getters designated as finalists for the award, which will be presented in June, between Games 3 and 4 of the Stanley Cup Final.

Speaking with Lizotte yesterday, he was honored to be recognized for things that he tries to do naturally, with no one watching.

“It’s humbling, it’s obviously a super-cool honor,” he said yesterday. “It’s the kind of award you don’t really look to get per say, it’s not like a performance award or whatever. I always like to say that what you do when no one is watching that is most important. Anybody can do the right thing, or persevere, when the spotlight is on you, but it’s something that’s a cool honor.”

His comments are spot on.

You don’t necessarily set out during a season to be nominated for the Masterton Trophy, but rather you try to do the right things each and every day. In Lizotte’s case, just by doing those things on a day-in, day-out basis, he was recognized on a larger scale.

“You don’t do the type of things that good people would do to get noticed, but at the end of the day, everyone likes to be appreciated for the things that they do,” Lizotte added. “It’s super humbling for sure.”

The criteria for selection leaves a lot of the discrepancy up to those voting. For Lizotte, it was his combination of tenacity, willpower and character that more than merited his nomination.

The officially submitted bio highlighted things like Lizotte’s undrafted status, his tenacious style of play and his performance this season that merited a two-year contract extension, signed on Deadline Day back in March. It’s for those reasons, and many more, that the choice of Lizotte was a good one.

“Great choice,” Kings Head Coach Todd McLellan said. “That award is about commitment, drive, resilience and Lizzo, he lives that every day here at the rink. He lives like it’s his last day in hockey equipment. Whether it’s a game day, practice day, workout day, he shows up and to find a young man like that, who doesn’t have a long career, but already gets it, is valuable in the room.”

Lizotte has embodied that quote just about every day this season.

Entering training camp, his everyday place in the lineup wasn’t a guarantee. With highly-touted, young forwards coming up through the system, several at the center-ice position, Lizotte knew he needed to earn his place in the lineup each and every day. And earn it he did.

Now, with 80 games in the rearview mirror and Lizotte playing each one he was healthy for, that almost feels weird to say. Lizotte is one of the first names on the team sheet every night, playing an important role that embodies the identity the Kings have created this season.

“Big difference, pretty big difference,” McLellan said, of having Lizotte versus not having him available. “Blake has the ability to pull people into the game and he does that on a nightly basis. He drags teammates in and they follow him. When he’s out, we miss it and when he’s in, it’s there.”

Lizotte spent the bulk of the season on the fourth line for the Kings, an effective energy line with Brendan Lemieux and Arthur Kaliyev as his long-term wingers. Injuries to Lizotte and Lemieux separated that line back in March, with the trio not playing together after all three members were finally healthy again.

Lizotte has since been trusted with centering the team’s third line, with the veteran duo of Dustin Brown and Alex Iafallo on his wings. Since his promotion to that line, Lizotte has seen his ice time per game surge from fewer than 12 minutes per game to nearly 13 and a half minutes per night, averaging 13:27 per night with the Brown/Iafallo combination.

“We have a lot of confidence in that line right now, they’ve been able to go out against any line of the opposition and hold their own,” McLellan said. “Sometimes that opens up the other lines for a mismatch, or when you’re in trouble they give you trusting shifts. Without him there, I don’t know if we always have that.”

Lizotte rarely has a day at the rink that veers from his ideals. Whether it’s a game day or a practice day, a day on the ice or a day in the gym, Lizotte brings it. That type of reputation earns him respect amongst the veterans, while also providing a great example for the younger players.

“He’s connected to the older players as well as the younger group,” McLellan added. “They can eyeball him, take a look at him and realize this guy knows what to do. When you know what to do, you fit the whole group. When you’re still learning, guys have their eye on you. If you’re older and you don’t do it, young kids are watching you, but he’s the middleman and he does a great job.”

The remainder of Lizotte’s regular season, and the start of the postseason at least, will come against Western Conference opposition. McLellan believes that, by this point, those teams know exactly who Lizotte is. He recalled, however, a conversation with a friend who coaches in the Eastern Conference, who reached out to him after playing the Kings earlier this season.

“I have a good friend who coaches on [an Eastern Conference] team and he texts me and says who the hell is 46,” McLellan said, with a chuckle. “But they don’t know our team, they haven’t played us. I think the Western Conference teams know who he is.”

That’s the impression Lizotte has made this season, clearly on media and hockey operations alike.

Now, with the postseason just a short step away, those same traits will be valued more than ever. At this time of the year, when every shift actually could be your last, a player who plays every shift in that way is a nice piece to have.