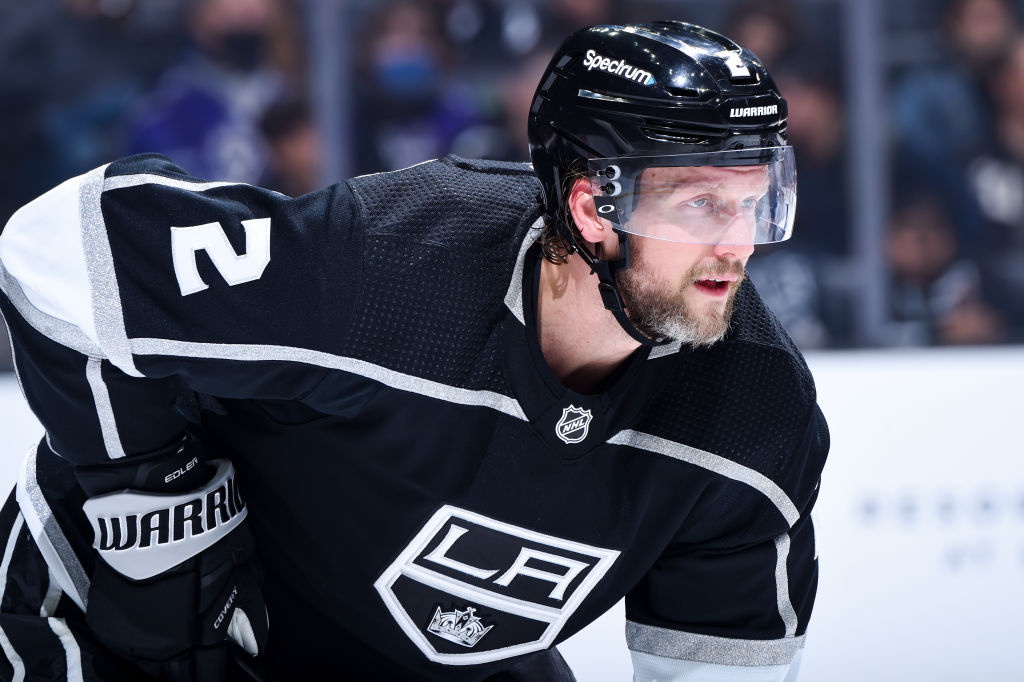 TONIGHT’S MATCHUP: The Kings conclude a stretch of three consecutive home games this week, as they host the San Jose Sharks in the final meeting of the season.

HEAD-TO-HEAD: San Jose has controlled the season series to date, with the Kings sitting at 0-2-1 against the Sharks so far this season. Trevor Moore leads all Kings skaters this season with three points (1-2-3) versus the Sharks, while Phillip Danault has a goal and an assist. Tonight’s game concludes the season series between the two teams and a stretch of three games in eight days.

KINGS VITALS: Following a small group on the ice yesterday, the Kings were back at it this morning in a full-team capacity.

After consecutive starts by Jonathan Quick, goaltender Cal Petersen did not skate this morning, making him tonight’s projected starter in net. Petersen, who was the goaltender of record on Saturday at SAP Center, brings with him a 1-4-1 record, a .894 save percentage and a 3.33 goals-against average lifetime versus San Jose.

The Kings continue to press on with a depleted lineup, with last game mismsing three regulars up front and six on the blueline. Three of those six defensemen have skated over the last three days – Tobias Bjornfot, Drew Doughty and Alex Edler – with the latter pair on the ice with the full group again this morning and Edler officially activated to the active roster and available this evening.

Edler now has three skates in with the full group, however two of those have been morning skates, in addition to yesterday’s partial-team practice. Getting a good, competitive practice at this time of the season, with the Kings in a stretch of 13 games in 23 days, is a rarity for sure, so finding those battle-situations in a full-team setting could be tricky. More on Edler below.

With that in mind, here’s a projection on tonight’s lineup, between last game and this morning’s rushes –

SHARKS VITALS: The Sharks have played well against the Kings recently, with two victories, surrounded by four losses against other opposition.

San Jose will be led tonight by forward Tomas Hertl, fresh off of a new, eight-year contract extension with the club that was announced yesterday. Hertl leads all Sharks skaters against the Kings with eight points this season (3-5-8) and has 15 points (8-7-15) versus LA over the last two seasons.

Per Curtis Pashelka of the Bay Area News Group, goaltender James Reimer did not practice yesterday but is expected to be available this evening. Usual batterymate Adin Hill will not be available tonight. Should Reimer get the nod this evening, he brings with him a 5-2-1 lifetime record versus the Kings, a .943 save percentage and a 1.99 goals-against average.

Per Pashelka, here’s how the Sharks lined up during yesterday’s practice, at the forward position –

#SJSharks lines this AM

Forward Kevin Labanc remains on injured reserve, though he has begun skating with the Sharks as of late. The defensive trio of Mario Ferraro, Nikolai Knyzhov and Radek Simek are also on IR as of this writing.

The Kings activated the veteran from long-term injured reserve earlier today, another strong sign that he could play tonight.

The @LAKings have made the following player transaction:

Alex Edler (D) has been activated from injured reserve. He is available for tonight's game.@Enterprise | #PlayersOnTheMove

Some positive injury news for the LA Kings is rare these days, but it’s really nice to get some when we do. Now, this isn’t 100 percent here, but the Kings had just seven defensemen on the ice today, including Edler and Drew Doughty, with the latter on late for extra work. All signs here are pointing to Edler’s return to the lineup, 110 days after he fractured multiple bones in his ankle on November 27.

“It’s no fun being hurt, being on the sideline and not being able to help your teammates,” Edler said this morning. “It’s been a long recovery, but I’m very excited to be back. I’ve been out there, working with the staff and some of the guys, I feel like I’ve been getting as much as I can before stepping into a game.”

The return hasn’t been easy for Edler, and it comes at a time in the season where the Kings have had little to no time to practice in a true fashion. That’s made it difficult to work Edler back into battle situations, because the Kings haven’t done a ton of them during their recent practices.

With a 35-year-old defenseman though, someone who has been through this before and has the experience to know how to get himself ready, now’s as good a time as any to get him back in, with the veteran feeling healthy and ready to roll.

“Quite honestly, we haven’t,” McLellan said. “He’s a veteran player that’s played in a lot of different situations, he has felt very comfortable in his recovery and the past 7-9 days. We’re playing our 13th game in 23 days and we haven’t practiced a lot, but that’s not changing, so at some point he has to go back in, baptism by fire. If anybody can do it, it would be Alex.”

For his part, it’s the pace of the game and those battle-tested situations that Edler feels are the most difficult to replicate in a practice setting. He’s been through the grind of a full, 82-game schedule before and understands that situations to do those things can be limited down the stretch. With that in mind, it has to happen at some point. Edler said he is ready to play however many minutes the coaching staff has in mind for him, regardless of the ask.

Solving San Jose
It’s no secret that the Kings have struggled with the Sharks, both this season and over the longer stretch dating back to last season. The Kings have yet to win from three matchups so far this season, and were on the right side of just two of eight games played last season as well, with more head-to-head matchups in the COVID-altered schedule.

“They’ve had their way, in basically every facet of the game,” McLellan said. “It would be easy for me to pick one or two things, but we’ve got to put the whole game together. Faceoff circle, defensively, offensively, power play, penalty kill, scoring first, take your pick. Turning the tide in any one of those directions puts us in a better place to have success. To narrow it down to one thing is hard to do.”

Naturally, as McLellan alluded to, improving in any one of those areas would start to turn things in the right direction, but at the same time, there’s not just one area of concern, one area of focus. It’s an all-around improvement when it comes to facing San Jose, doing the things that have made the Kings successful against other opposition and bringing those traits and areas of play against the Sharks.

No team has scored more than San Jose against the Kings this season (15), with the Kings finding the back of the net just five times in those games. The Sharks are at 50 percent on the power play so far this season, while the Kings have not scored on the man advantage.

While shooting at a 20 percent pace is not sustainable in the long term, San Jose has had the Kings number this season, a trend that has carried over from 2020-21, though the totals listed above are much more staggering than last season, which saw the metrics in the overall season series just slightly tilted towards the Sharks.

With two big points on the line, against a team behind them in the standings, a huge opportunity to flip the script a bit here this evening.

Honoring Jonathan
Lastly, Insiders, we’ve mentioned it before, but one last time, it’s an important night before the game as well as the game itself. The Kings will honor goaltender Jonathan Quick on 700 games played in the NHL, one of just 30 goaltenders to achieve that feat.

Our LAKI story on Quick from last night is here, plus more on tonight’s ceremony available here.

I do not believe that the ceremony will be broadcast live on ESPN, so the only way to see it will be in person. For those planning on attending, recommendation is to be seated by 6:45.

Kings and Sharks, tonight on ESPN+ /Hulu, with puck drop slated for 7 PM!

By Zach Dooley
72 Comments
Behind the Scenes