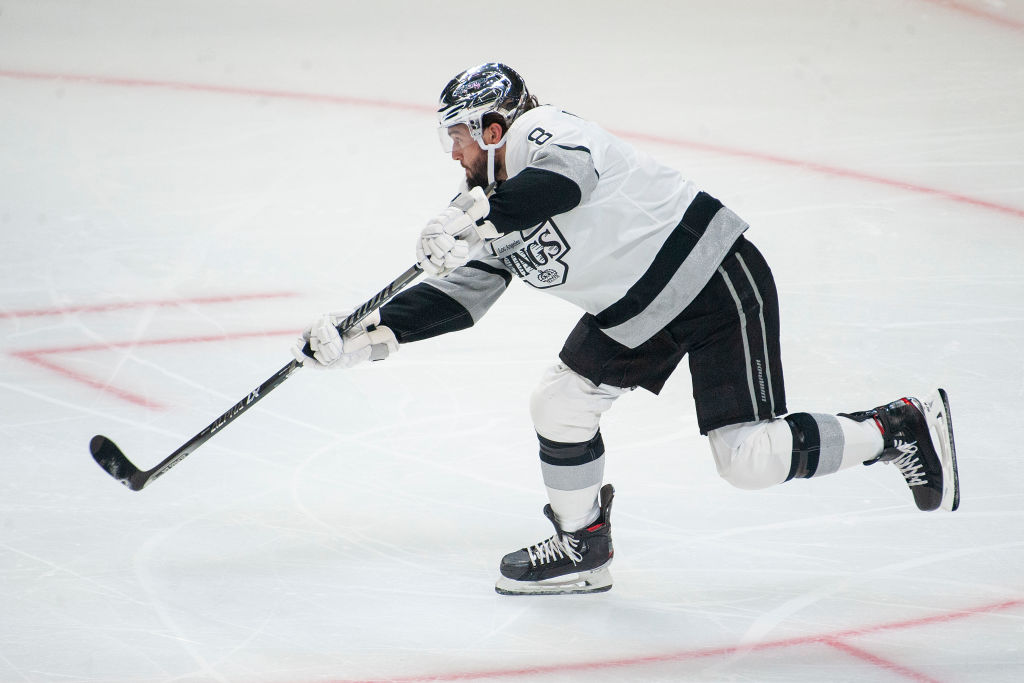 TONIGHT’S MATCHUP: The Kings continue on their Northeast trip this evening as they visit the New York Islanders for the long meeting on Long Island this season.

HEAD-TO-HEAD: The Kings and Islanders square off this evening for the first time since February 2020. The two teams each won at home during the 2019-20 season, with Alex Iafallo scoring in both games and Blake Lizotte collecting an assist. Iafallo has five points (2-3-5) from six career games against New York.

KINGS VITALS: The Kings have shifted from New York City to Long Island, completing their time in the Tri-State region this evening against the Islanders.

Continuing the rotation at the goaltender position, expect to see Cal Petersen between the pipes this evening for the Kings. Tonight will mark Petersen’s first career start against the Islanders. Since he returned to the lineup on January 8, Petersen is 4-1-0 with a .919 save percentage, including a 23-save effort in a win over New Jersey to open the trip.

The Kings held an optional skate this morning at UBS Arena, so we won’t have a full look at tonight’s lineup until closer to puck drop.

Forward Andreas Athanasiou will check back into the lineup this evening, per Todd McLellan. McLellan indicated that the team had a staff member test positive today, which has created some uncertainty around the team for tonight’s game. Who Athanasiou enters in for could depend on if the team has any positive tests, and we won’t know that information until later in the day, thus McLellan didn’t commit to a formal lineup for this evening.

For reference, here’s how the Kings lined up on Monday at Madison Square Garden –

ISLANDERS VITALS: The Islanders are currently on game four of a season-long, seven-game homestand. The Islanders enter tonight’s action off of seven wins from their last nine games, playing their most successful hockey of the season.

Ever since the Islanders returned to action on January 13, they have rotated the net between Russian goaltenders Ilya Sorokin and Semyon Varlamov. Varlamov is 9-6-3 all-time against the Kings, with a .922 save percentage and a 2.26 goals-against average against Los Angeles.

Per Andrew Gross of Newsday, here’s how the Islanders lined up last time out against Philadelphia on Tuesday.

The Islanders have been without two key contributors – forward Kyle Palmieri and defenseman Ryan Pulock – who are currently out on injured reserve. Both players, however skated this morning, with Palmieri appearing set to return this evening, though Pulock will not.

No Dought About It

He is set to play in his 1,000th career regular-season NHL game this evening at UBS Arena. Doughty will become the 359th player in NHL history to reach the milestone, and the fifth player to play 1,000 games in a Kings jersey, making LA the first non-Original Six franchise to have five or more players play in 1,000 games for a single franchise.

Impressive stuff, from one of the most impressive defensemen not just in LA Kings history, but in NHL history.

“I’ve been fortunate enough to be around Drew for three years now, as Head Coach, and for my whole career out West,” Head Coach Todd McLellan said this morning. “Having battled against, you have a ton of respect for how he plays the game, contributes on a nightly basis, playing so many minutes on both sides of the puck. Once you get here, you appreciate him even more, all of the accolades, the championships, the trophies, the medals, all of that is well documented. I don’t know if we understand enough how badly he wants to climb the mountain again and that’s what I appreciate most, being here now. He’s prepared to stick it out, grind it out, to get this franchise back to the top and that has not been an easy task for him. When you’re used to winning and you have to go to the bottom and climb again, there’s frustration some days, but for the most part, he’s there. That’s probably the biggest appreciation I have of him.”

Doughty’s interview this morning was engaging, entertaining and memorable, as he looks back on an impressive career, forward to tonight’s milestone and around the game with the uniqueness of his place in history, both with the Kings and the NHL.

The full video from the interview is shown above, with selected quotes pulled below –

Doughty on playing his entire career with Brown, Kopitar and Quick in LA
I think it’s pretty cool. All of us want to be Kings for life and I couldn’t have been there without [Kopitar and Brown] that’s for sure and Quickie has played basically 1,000 games as a goalie as well. It’s pretty special. Brownie was my roommate in the early days on the road and taught me the ropes. Those three are my brothers for life, I love them, it’s been great and we’re all so happy to be able to do it all together with the Kings.

On reaching 1,000 and his thoughts entering tonight’s game
I’m very proud. I’ve got to thank the training staff for always keeping me in shape, and when I do have injuries, for making me able to play, I can’t thank them enough. I’m going out there, it’s just another game for me tonight, it is a great milestone and I’m very proud of that milestone. I play pretty hard too, it’s not like I’m going out there and not hitting anyone or not blocking shots, so I’m very proud of it. It’s just another game though, and we need to get a win, so that’s what I’m focused on, honestly I don’t care much for the attention around it. I just want to go out there and win a hockey game.

On the build up to the game
Lots of texts from family and friends, that I appreciate, but the build up has been all about it. When I show up tonight, obviously just going into another game and like I said, we need another win, so that’s a focus. Like I said, I’m very proud to have played this many games and I don’t know if I’ll get another 1,000, but I hope to get a bunch more. I’m not done, I feel great, I feel younger than I am.

On if he remembers his first NHL game
Some of the rookies asked me today, do I even remember my first game and I do remember it. The thing that stands out for me is that I messed up going into the third period on the power play and they scored a goal, so that’s kind of how I remember my first game. I do a lot of reflecting on the times we’ve had here in LA, some of the best times of my life, I’ve basically grown up in LA since I was 18 and moved away on my own. I had to overcome a lot of things, being away from my family, I couldn’t have had a better group of guys and I can’t thank my teammates enough for all they’ve done for me and being there for me always. I’m just very happy to be an LA King, I’ve always wanted to be an LA King since I was a young boy. Now, 1000 games with the LA Kings, I could have never dreamt about that.

On the players who most influenced him when he was a young player
It was Wayne Gretzky when I was a young kid, I just fully looked up to him, wanted to be him, I was number 99 growing up on my AAA team. I loved Wayne Gretzky growing up. You talk about those three players [Brown, Kopitar, Quick], but there are a lot of other teammates when I got to the NHL that helped me a ton, Matt Greene would be one, he made me a pro in the league, he was basically a father to me here. Just taught me everything about being a professional and having some fun at the same time. My first year, they moved Sean O’Donnell in too, who helped me a ton and taught me a lot about the game. I have so many other teammates, I could keep going on and on that I looked. up to in a lot of ways.

Plenty more from Drew available in the video above, including what he’s learned as he’s gotten older, what he tries to pass along to younger players, when he switched from center to defense as a kid and how he got his nickname, Dewey, with the Kings.

Number 1,000 for Number 8 is coming tonight at 4 PM Pacific Time. Tonight’s game is on ESPN+ / Hulu, not on Bally Sports West. The Kings will honor Doughty at home during the game on February 15 against the Oilers, with a pre-game ceremony at Crypto.com Arena.