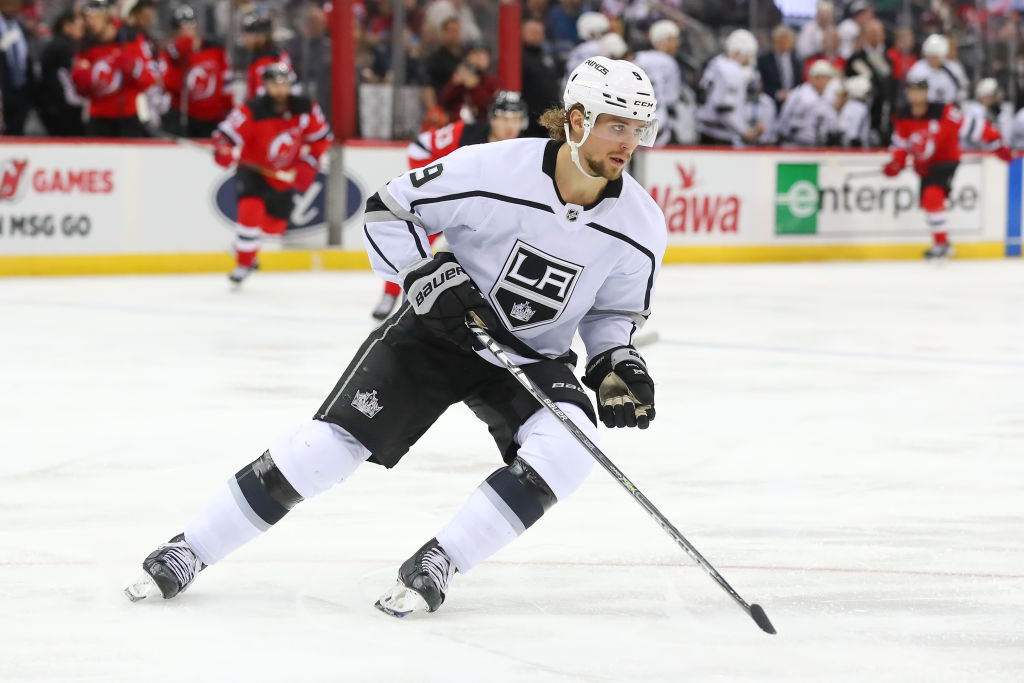 TONIGHT’S MATCHUP: The Kings begin a six-game roadtrip this evening in New Jersey, with the Devils first up on the extended stretch of games away from home.

HEAD-TO-HEAD: Tonight’s game concludes the season series between the Kings and Devils, following a 3-2 overtime win for LA on home ice back in November. Forwards Arthur Kaliyev, Adrian Kempe and Alex Iafallo scored in that win, while Dustin Brown has collected three points (1-2-3) over his last three games played against New Jersey.

KINGS VITALS: After a couple of days off, the Kings return to game action this evening in the Garden State.

Cal Petersen was the first goaltender off this morning, making him tonight’s suspected starter in net. Petersen is 1-1-0 lifetime against the Devils, with a .912 save percentage and a 2.50 goals-against average. Petersen was the winning goaltender when these two teams met back in early-November, with 21 save in the 3-2 overtime victory.

The Kings held an optional morning skate today in New Jersey, following a full-team practice yesterday afternoon, though most of the group was on the ice. Yesterday’s skate gave us the idea that the Kings would be without forwards Adrian Kempe or Andreas Athanasiou on game one of this trip, with the forwards lining up identically to how they were on Thursday against Colorado.

This morning, however, Kempe joined the group on the ice and is expected to play this evening, per Todd McLellan. With that in mind, here’s an expected lineup this evening in New Jersey –

DEVILS VITALS: The Devils are back in action this evening after a come from behind, 7-4 victory yesterday evening over Carolina.

Per Amanda Stein of the Devils Team Website, here’s how the Devils lined up yesterday against Carolina –

Warmups underway for #NJDevils and lines and pairings look like the following:

🔸Wingers swapped around from last game
🔹White goes in for Smith
🥅 pic.twitter.com/Z1TNlFuGOr

New Jersey is without regular defensemen Dougie Hamilton and Ty Smith, with both players on injured reserve. Will update if any further information comes out from the Devils, with Head Coach Lindy Ruff expected to address local media at 5 PM Eastern.

Return Of The Kemp
“[It’s been] five days, it’s not ideal, but he has a pretty good engine and real good legs. I think he’ll be just fine.”

That was Todd McLellan earlier today on forward Adrian Kempe, who is expected to return to the Kings lineup this evening in New Jersey. Kempe missed out on the last three games – all losses – but appears set to return tonight. Though the Kings did not take line rushes today, Kempe wore a gray jersey this morning, akin to his usual linemates in Alex Iafallo and Anze Kopitar.

With that in mind, we’ll assume for now he will resume his usual place, on his usual line.

Kempe’s presence was certainly missed for the Kings, perhaps in a way that you really realize how many tools he has when he’s not playing. Having that complete of a player in the lineup was a massive benefit for the Kings and is something that was missed over the last week.

“Legs, brain, confidence, game management, size, shot, that pretty much sums it up, and minutes,” McLellan said, of Kempe. “Adrian can play minutes, he can get off the ice and recover in 25 seconds and go do it again. Some of the [other] engines are trying to keep or trying to get it and Adrian’s got it when it comes to that.”

Beyond the tools, Kempe is the leading goalscorer for this team, while also playing an important role on the team’s top line, which doubles as one that plays against top-class opposition on most nights. That’s part of the deal playing on a line with Kopitar and something that Kempe has handled quite well.

Regardless of how you shake it, a huge boost for the Kings tonight to get their All-Star back in the lineup.

Second Line, Set The Tone
Viktor Arvidsson feels that his line, with Phillip Danault and Trevor Moore, is one that can help to set the tone early for the LA Kings.

It may not be quite as visible as it was against say the Philadelphia game, when Arvidsson scored just 12 seconds in. It also doesn’t need to be. Those types of starts are rare, but by doing the things that have made that second line successful, Arvidsson believes that unit has all the pieces to be effective early and often in games.

“I do, I think we have every tool to be effective and be an impact line for sure.”

So, what are those tools?

“We hunt pucks, all three of us, I think we cover for each other well and we talk a lot,” he said this morning. “Coming into a line when you’ve never played together, you have to talk, you have to solve situations after they happen and try to do them better the next time. We hold onto the puck a lot, so we play with the puck a lot, I feel like that’s huge.”

Since they were united as a group at the start of the calendar year, the line of Moore – Danault – Arvidsson has been a puck possession monster, with the production to match it. The line has controlled nearly 64 percent of shot attempts at 5-on-5, with scoring chances and high-danger chances at over 65 percent controlled.

The production has been just as good as of late. Arvidsson saw a five-game point streak snapped on Thursday, but has ten points (3-7-10) from nine games played. Moore has 11 points (2-9-11) in that span, while Danault has six goals and eight points. Incredibly solid production from the second line on paper.

Looking ahead to tonight, Arvidsson believes that the team’s recent struggles are correctable. There have been some lapses in concentration, some sloppiness, but things that can be fixed. He thinks the path starts with the older players like himself doing things the right way, setting the tone for the group. From there, it should all fall in line.

“Some are preventable for sure, I think we’ve been a little sloppy for sure, not detailed enough,” he said. “We’ve got to fix that, just try to work on it and clean it up. It’s got to come from everybody, especially the older players first and the younger players have to understand too that you have to do it every shift, every night.”

One Game At A Time
Frequently, I am guilty of looking at a trip like this one differently than the Kings do internally.

I look at this trip as being a six-game trip, with the thought that if they get X number of points, or X number of wins, it would be a successful trip for the Kings. I think we all might be guilty of that from an outside view point.

That isn’t the case within the room, though. There’s no point goal for a six-game stretch. The only goal in front of the Kings right now is two points from tonight’s game against the Devils.

“For us, it’s one game,” McLellan said today. “If we start talking, hey, we’re here for six games, no, it’s tonight. Spend it all on tonight’s game, we’ll recover tomorrow and we’ll move on. We don’t have the luxury of saying hey, if we come back with three wins or something like that, that’s great. We don’t talk like that. We approach this one as we’ve got to find a way to beat a team that’s playing really well and that’s it.”

One game at a time…..well, that one game is tonight! Kings and Devils, 7 PM local, 4 PM Pacific from New Jersey!

By Zach Dooley
823 Comments
Behind the Scenes