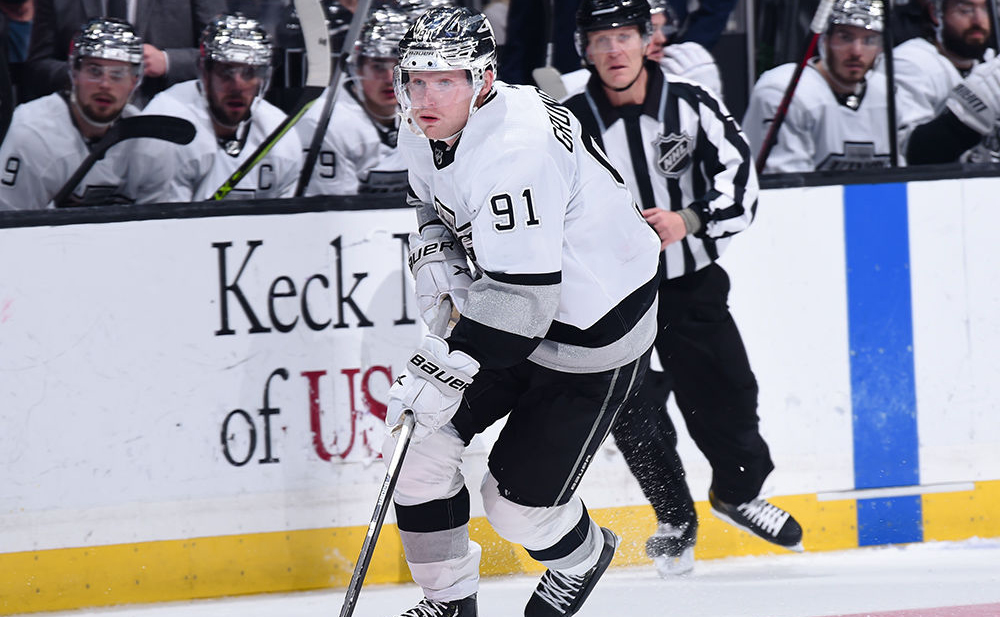 KINGS VITALS: Tonight’s game is the final on home ice for the Kings before the NHL’s All-Star Game, with six straight road games taking the team into the break.

Jonathan Quick is tonight’s expected starter between the pipes for the Kings, continuing the rotation in net. Quick won his lone start against Colorado last season, as he made 24 saves on 26 shots in a 4-2 victory in Los Angeles. All-time, Quick is 20-6-2 against the Avalanche, with a .918 save percentage and a 2.16 goals-against average.

The Kings expect to have reinforcements available this evening as they take on the Avalanche. Forward Quinton Byfield was recalled from AHL-Ontario earlier this morning and took morning skate with the Kings today. Byfield is expected to make his season debut for the Kings this evening, The 19-year-old forward has six points (4-2-6) from his last six games played with the Reign.

Forward Carl Grundstrom is also expected to return to the lineup for the Kings this evening, giving the team two potential options for this evening, with Adrian Kempe still waiting in COVID Protocol and Andreas Athanasiou still not ready just yet.

Today’s Kings skate was a full-team skate, with tonight’s expected alignment as follows –

AVALANCHE VITALS: The Avalanche enter tonight’s action off of a 2-0 victory over Anaheim yesterday evening at Honda Center. Colorado’s trip consists of just the two games, in between home games on either side.

Goaltender Pavel Francouz started last night in Anaheim, with former King Darcy Kuemper, who was injured in his last start, serving as the backup. If Kuemper does start tonight, he brings a 5-6-3 record all-time versus the Kings into tonight’s action, with a .923 save percentage and a 2.27 goals-against average.

Per the Colorado team account, here’s how the Avalanche lined up yesterday in Anaheim –

Tonight marks the first game back for defenseman Kurtis MacDermid, who was claimed by Seattle in the 2021 NHL Expansion Draft and then traded to Colorado.

Byfield Is Back
The Kings will have forward Quinton Byfield in the lineup for his season debut this evening. Byfield is expected to skate on the third line tonight with Carl Grundstrom on the left and Dustin Brown on the right, his first game since May.

Byfield, in the words of the coaching staff, played his way onto the opening night roster back in October but suffered a broken ankle in his preseason finale. After a short return to Ontario, Byfield appeared set to be recalled to the Kings in late-December, but was added into COVID Protocol a day later.

Now, coming off of a stretch with six points from his last seven games, Byfield is ready to go this evening.

From an external perspective, the bright lights shine down on any game when you say the name Quinton Byfield. Second-overall draft pick, with a unique combination of size and skating, it’s an exciting proposition for Kings fans.

Internally, however, Todd McLellan just wants Quinton Byfield to be……Quinton Byfield. No need for external hype and no need for him to try and be more than the player he is today. Byfield, tonight, is the third-line center, who will be asked to come in and help solidify the least consistent line, from a personnel standpoint, this season.

“We need to give Quinton Byfield a little bit of breathing room,” McLellan said. “He’s not the savior, he’s just Quinton Byfield, he’s going to play a game tonight. I’d rather take the pressure off of him than put it on him. That type of weight should go on other shoulders that need to play a real good game tonight.”

McLellan talked about seeing more highlights than full games of Byfield when discussed this morning but noted that Byfield’s game has improved steadily over the last three weeks with the Reign. As he’s worked his way back from his injury, and then from COVID, he’s gotten more and more comfortable at the AHL level, something that has shown through not only through his production but from his overall game.

Now, with that behind him, he’s hoping to see it show up at the NHL level as well.

“The American League is one thing and the NHL will be another, but his legs, his lungs, his sense of timing, the team play, all of those reminders as a real young player had to show up again in his game,” McLellan said. “His play in the American League has gotten better over the last three weeks, which is exactly what we hoped and now he’ll likely need some time to get his game back at the NHL level as well.

From Byfield’s perspective, he’s excited to make his season debut, as well as his debut in front of a full building here in Los Angeles. Each of his six games played last season were in front of a partial-capacity crowd. Now’s the time for a full house and he’s just hoping to give those in attendance something to cheer about.

“I’m sure happy for that. I’m excited to play in front of the LA fans for the first time and I just want to do something that they can cheer about.”

Back To Identity
The last two games have seen the Kings drift away from the identity they have built this season.

That identity is a tenacious, aggressive team that has been tough to play against. Getting easy goals against the Kings hasn’t been commonplace over the last six weeks. They’ve been tight in and around their net, they’ve checked well and they’ve proven to be thorn in the side of opposing teams this season.

Against San Jose and Tampa Bay, that was not the case. The Kings gave up a “free goal” to open the game against Tampa Bay on Tuesday, something McLellan made sure to reinforce doesn’t happen again today against Colorado.

“It doesn’t matter who we play, to give a team at this level a single goal is almost a death sentence,” he said. “If a team goes out and earns a goal, you figure out a way to comeback, but if you just put one on the board, if we just give Colorado a goal tonight and start, that’s a tough deficit to come from behind.”

Coming out of the gates tonight, McLellan would like to see the Kings be “sharp”. What exactly that means could go a lot of different directions, but it starts with being sharp out of the gates. Being sharp leads to being tighter defensively, which is a key against a team as dynamic as Colorado.

“I’d like to see us be sharp, I’d like to see us connect on our passes,” McLellan said. “All of the stuff that players have told you over the last month and a half, the words they’ve been using, that has to show up. That will lead us to our identity and that will give us an opportunity. If it isn’t, it takes us away from our identity and it makes it awfully hard on everyone.”

The Avalanche present a unique challenge, as did Tampa Bay two days prior. With the preseason Stanley Cup favorites from each conference coming into Los Angeles on consecutive nights, by many estimations, this is as tough a two-game homestand as you could draft up.

With a pair of potential MVP candidates down the middle of the ice in Nathan MacKinnon and Nazem Kadri, a set of dynamic wingers including one of the league’s top offensive players in Mikko Rantanen, and a group of blueliners that defend like defensemen but have the skill of a forward, led by Cale Makar, the Avalanche are certainly a force to be reckoned with.

“They are a very dynamic team right now. With the three backend guys that can play like forwards for the most part, two centermen that are MVP candidates, they can score and I got back to the freebees. If we put one on the board before the game even starts, we’re in trouble. They’re averaging almost five goals a game here over the last little bit and we don’t score five that often. It might sound strange, but we need to defend very well before we score the five goals and that will be something we’ll need to do.

Halfway Home
Lastly, hear from Todd McLellan on his assessment of the team’s halfway mark, which is exactly where they will be after tonight’s game. Halfway home.

“We have to digest some things and the plan was to do that over the next couple of days, but just quickly thinking…where we are, the way we’ve played and the identity we have has been a real positive for our team. Can we keep that up with our special teams where it is? I think the answer is no, we have to get better in those two areas if we want to maintain our status in the standings in the second half, it’s as simple as that. Yes, some really good performances and some good team play, but there’s a lot of work that needs to be done.

Kings and Avalanche, EARLY PUCK DROP AT 6:30 PM!! Talk to you then, Insiders!