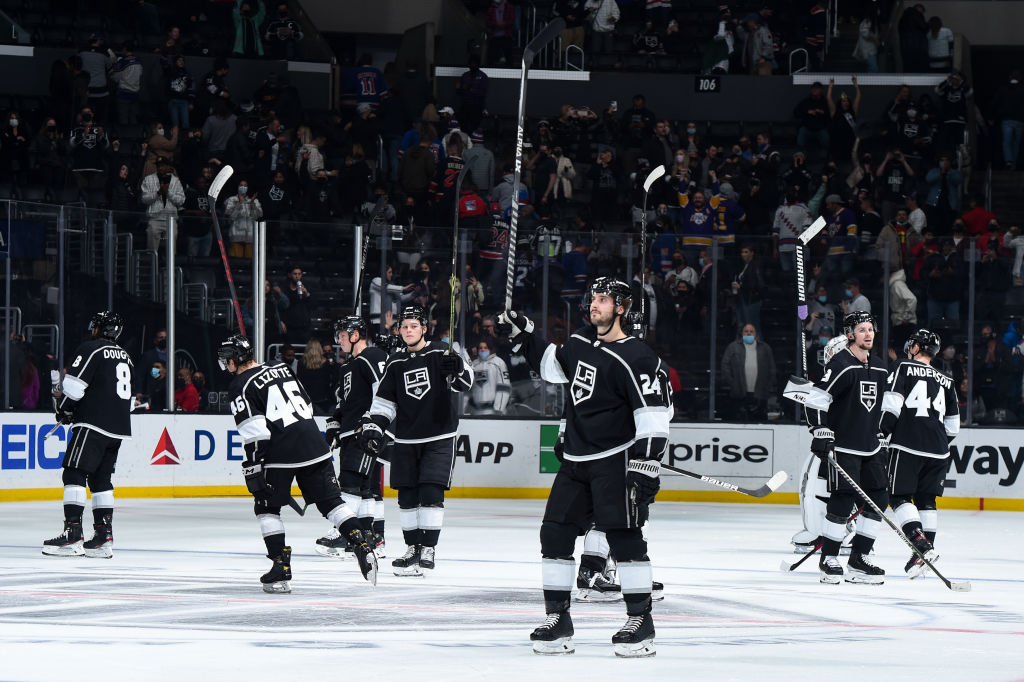 Insiders, I’m here today to talk about a different view.

As I wrote some of this piece after the game against Red Wings, I had one meaning in mind for the title, but following the game against the Rangers, it gained duality. We’ll dive a bit into the games versus Nashville, Detroit and New York – this is an analysis piece after all – but, I was fortunate enough to take in Saturday’s game against Detroit through a different lens, on color commentary with the legendary Nick Nickson.

Perhaps I should do this more often……20 minutes in and the Kings had already tied a franchise record for shots on goal in a single period. Or, perhaps not, since Daryl Evans is a legend of the game, who we hope to have back in action on Thursday against Pittsburgh.

Watching a game for the purpose of live commentary is certainly different than for an article, and gave me some takeaways I think can only help our coverage here on LAKI. Being on the broadcast requires being dialed in for almost the entirety of the game, whereas when you’re writing, you’re focused, you’re paying attention, but if you get distracted for a minute, nothing’s falling off. Watching last night, I noticed that difference in some ways for sure.

That on-air focus certainly led to an increased understanding of details, whether it be the finer points of Cal Petersen’s game, the energy and effectiveness, shift over shift, of the Lizotte line or seeing plays develop in full detail like Drew Doughty’s first-period goal. Doing these things alongside Nick, a true pro in every sense of the word, made it that much more special and I thank him and the Kings for the opportunity.

I’ve done color commentary before in my career, in the ECHL and the AHL, but Saturday evening was the first time I was even able to solely focus on the job. At the minor-league levels, color was always on top of my other duties, which included running the team social media accounts, pulling video content or handling any issues that might arise in the press area and anything in between. And, when you work in the ECHL, there’s always some in between. On Saturday though, there was really just one focus, beyond some updates here on our game thread, and that was pretty cool.

With that behind us, my voice has been re-assigned back where it belongs – online, written media. And that’s what we have here this morning, an online, written story on the trio of games the Kings have played since last writing one of these. In that time, we’ve had a four-day layoff followed by three interesting games. The Kings concluded that spell at 2-1-0, bringing their total on the current homestand to 4-2-0 with a game to play on Thursday against Pittsburgh.

The Nashville game saw the Kings play very well at 5-on-5, with several things they did in that game carrying over into the first period against Detroit, predominantly physical play, forcing turnovers and being aggressive and first to loose pucks. We saw those things in both games and at 5-on-5, the Kings were the better team on both nights.

Where the Nashville game was lost was on special teams, as the Kings allowed two PPG’s in the first period, bringing their total to nine from nine games played since Alex Edler left the lineup, though they also have three shorthanded goals in that span. The Kings bounced back to win the special teams battle on Saturday, as the unit saw some growth in the right direction, and didn’t lose in on Monday, against a team that entered the game in the NHL’s Top 10 in both PP and PK percentages.

That brings us to the game against the Rangers, as the Kings carried over their strong play at even strength to once again massively outshoot one of the league’s best teams. The Rangers were one of just four teams in the league with 50+ points entering yesterday’s game, but that didn’t matter when the teams were between the boards. While it wasn’t perfect, the Kings controlled the puck more than their opponent did, in all three periods, got a couple of goals off of second-chance opportunities and checked their way to a low-scoring victory.

If that last sentence aint this team in a nutshell.

That brings us to why this article can be about a “different view” in more ways than one. As I write this story, the LA Kings sit in, GASP, one of the three playoff positions in the Pacific Division. That’s certainly a different view!

Blah blah winning percentage, blah blah games played, blah blah whatever you want. There are 46 games still to be played this season and being in that spot on January 11 means very little, but isn’t it a good feeling nonetheless to not even have to scroll down to the Wild Card section before you see that LA shield pop up?

I remember asking Todd McLellan in late-October or early-November, with the Kings just a couple of games into that seven-game winning streak, if he felt the LA Kings have an identity as a team. At the time, he said it was too soon to answer that question. Now that we’ve seen this team unfold the way that it has, I think it’s fair to say we’ve seen the identity of this team established, with players and coaches describing it similarly as the days, weeks and now months have passed by.

The Kings are off today, the team’s first off day in nine days, before getting back on the ice tomorrow at TSPC for practice in preparation for Pittsburgh on Thursday. Thursday marks the return of Jeff Carter to Los Angeles, sure to be a special moment in a game between playoff hopefuls. With Evgeni Malkin expected back, it presents a strong test in the final game of the current seven-game homestand.

I had the chance to chat with Cal Petersen after his shutout against Detroit on the process of coming back from COVID and a long layoff to perform as well as he did in that game. Excited to share that story with you later on this afternoon.

Thanks for following, Insiders!