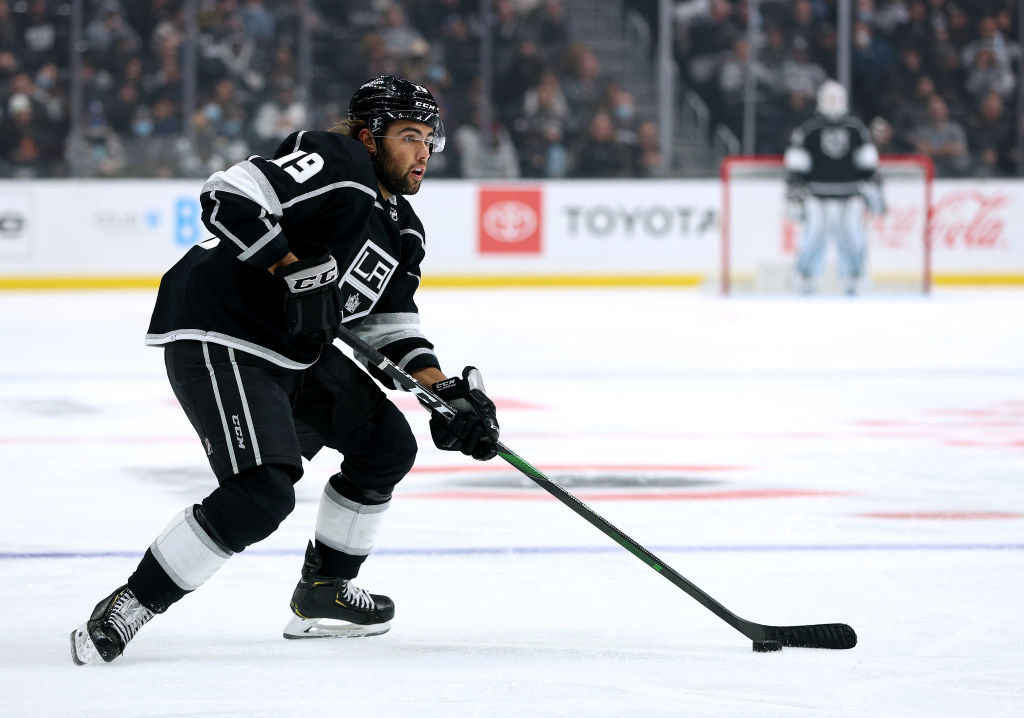 TONIGHT’S MATCHUP: We’re back at it tonight for the penultimate game of the current seven-game homestand, as the Kings host the New York Rangers this evening.

HEAD-TO-HEAD: The Kings and Rangers last met during the 2019-20 season, with each team winning the game played on home ice. Defenseman Matt Roy and forward Blake Lizotte led the Kings with two assists over those two games. Former Ranger Brendan Lemieux is set to line up against his former team, after he played 109 games with New York from 2018-20. At 0.75 points per game against NYR, Dustin Brown has his third career highest PPG versus one opponent.

KINGS VITALS: As has been the case over the last set of games, the Kings held an optional morning skate today in advance of tonight’s tilt.

Goaltender Cal Petersen was off first this morning, making him tonight’s likely starter between the pipes. Petersen, coming off of a 21-save shutout against Detroit on Saturday, is in line for his first career appearance against the Rangers, as he was versus the Red Wings. This also marks Petersen’s first set of consecutive starts this season.

The Kings are expecting to have Alex Iafallo and Alex Turcotte available again this evening against the Rangers, with both players out of COVID Protocol and returning to practice yesterday. Amongst those checking out is Lias Andersson, who suffered an injury during yesterday’s practice and is out for tonight. Todd McLellan confirmed this morning that Martin Frk has entered into protocol, making him the other player coming out of the lineup.

Andreas Athanasiou is not expected to play tonight but is an option to return on Thursday against Pittsburgh. With that in mind, here’s how the Kings could line up this evening against New York –

Samuel Fagemo, recalled from AHL-Ontario this morning, and Jacob Moverare are also options for the Kings at this time.

RANGERS VITALS: The Rangers are in the midst of four consecutive games against Pacific Division opposition, with a split against Anaheim and Vegas to begin the trip. Overall, New York has won four of its last five games and is one of four NHL teams with 50 or more points on the season to date.

With usual starter and Vezina contender Igor Shesterkin in COVID Protocol, Alexander Georgiev has been the team’s starting netminder over the last three games played. Georgiev has never faced the Kings in his NHL career, though backup goaltender Keith Kinkaid has posted a 4-1-0 record, with a .943 save percentage and a 1.58 goals-against average from six head-to-head matchups. Kinkaid is 3-0-0 lifetime in Los Angeles.

The Rangers are not scheduled to hold a morning skate today, but per Vince Mercogliano of USA Today, here’s how the Rangers lined up during practice yesterday in Los Angeles –

And pairs from last game –

The Rangers are without Shesterkin, as well forwards Ryan Reaves and Julien Gauthier and Head Coach Gerard Gallant. Kris Knoblauch, Head Coach of the AHL’s Hartford Wolf Pack, will step in behind the bench this evening for the visitors.

The Alexes
The Kings are set to welcome back Alex Iafallo and Alex Turcotte to the roster tonight, in advance of the game against the Rangers. Iafallo and Turcotte both practiced with the team yesterday and both were on the ice for morning skate today, with Todd McLellan calling both players “options” for this evening.

Iafallo was officially activated from COVID Protocol earlier today, while Turcotte, who was activated yesterday, was recalled from the taxi squad. Both felt like formalities to happen today and now both players are officially eligible to play this evening.

We’ve seen varying responses from individuals returning to game action as of late. Dustin Brown and Olli Maatta didn’t seem to have much trouble at all returning, while it took guys like Drew Doughty and Phillip Danault a game or two, by their own admission, to get back to full speed. Everybody is different, so we’ll have to wait and see how it impacts 19 and 39.

“Everybody’s engine is a little bit different to begin with, the roles they play are different, symptoms are different,” McLellan said this morning. “Some guys only need a pre-game skate and they’re good to go, other guys, Phil said he really felt it, he said it took him a few games to get it back. Brownie was sick on that road trip, then he sat out for Christmas break, missed games, that 18 days must’ve been hard on him, but he’s done a pretty good job.”

In Iafallo, the Kings get back an important, top-six winger, who returned to Anze Kopitar’s line during yesterday’s practice, along with Adrian Kempe. Turcotte had done a nice job as the team’s third-line center in the two games before he entered into protocol and will get another opportunity in that role tonight, potentally with Brown and Rasmus Kupari on his wings. Turcotte is still just three games into a young NHL career but showed a lot of strong signs in that short span.

Good to get both players back in action this evening. McLellan had this to say about Iafallo and Turcotte coming back in.

“[Iafallo]’s engine is used to running at the National Hockey League level, at a high pace,” McLellan said. “He wasn’t, at least from what I’ve been told, an individual that had a lot of symptoms. Both of their stays in protocol were relatively short, you’d like to think they haven’t lost a lot. Turc, on the other hand, he’s got nerves and anxiety as a young player that can zap your energy a little bit. He’s playing against an opponent he hasn’t seen before, so there’s a little more awareness with him maybe than with [Iafallo] but we’ll keep an eye on both.”

Special Teams Standards
The Kings were on the right side of the special teams battle against Detroit, with Adrian Kempe scoring shorthanded and Phillip Danault more or less scoring on the power play, even if it doesn’t show up that way, officially, in the stat sheet.

Danault’s goal came just a few seconds after a power play had expired, though the goal came off of an offensive sequence that was generated by the second power-play unit and was in the net before Detroit forward Joe Veleno was able to rejoin the play in a meaningful way. While it doesn’t improve the formal percentage of the Kings power play, that’s a PPG by internal standards.

“We’re putting some emphasis on the secondary opportunities on the power play, a lot of goals are being scored that way, we don’t have enough, yet, we’re in and around that area,” McLellan said today. “We’ve got to do a better job of it and that was a goal that won’t show up in the power-play numbers, but by the time the individual got out of the box, the goal was scored.”

Overall, special teams were better against the Red Wings than those units had been in recent games. The power play has been more threatening over the last few games, with goals against Philadelphia and Nashville and the Danault goal against Detroit. Signs of life there, with more opportunities being created, and more dangerous ones at that.

The penalty kill, despite three shorthanded goals over the last six games, had struggled coming into the Detroit game. An area that is still targeted for improvement, but the last time out was certainly a step in the right direction.

“[Special teams was] better – not that the power play was bad against Nashville, I thought it was good against Philly – but the penalty kill was better, and it needs to continue to find its footing,” McLellan said. “Obviously an area we have to improve on.”

Ranger Reunion
We were looking at two Ranger Reunions this evening, but Lias Andersson’s injury eliminates one of them. The other, however, is Brendan Lemieux, who was a Ranger for parts of three seasons before he was traded to the Kings in March 2021.

Originally dealt from Winnipeg to New York as a part of the package that sent Kevin Hayes to Winnipeg, a trade-deadline rental, Lemieux found a home with the Rangers as an energetic, physical winger, the same qualities that have endeared him to many in Los Angeles. Now, facing his former group for the first time, Lemieux admitted there’s a little extra juice playing his former team, though he has no ill will whatsoever against the organization as a whole.

“I think there always is [a little extra juice] when you play your former team,” Lemieux said. “I really enjoyed my time there, I don’t think there’s any vengeance type thing, but it’s always exciting to play your old team, your buddies.”

In this particular instance, it’s more about seeing old teammates, old friends, than anything else. There’s always a bit of a special moment in those situations, and it’s no different for Lemieux. He was quick to reinforce that is the primary reason for some added motivation, nothing to do at all with proving any sort of points to the Rangers.

“I was similar in age and close with quite a few guys, a lot of them are gone, since I’ve been there, there’s been a lot of turnover on every team, and these two teams,” Lemieux said. “I think it’s definitely different when you play your old team. Sometimes, you want to prove them wrong, why they shouldn’t have traded you and other times, it’s just good to see your friends and for me, I think it’s more of the latter.”

Kings and Rangers, coming up next from Crypto.com Arena!

By Zach Dooley
163 Comments
Behind the Scenes