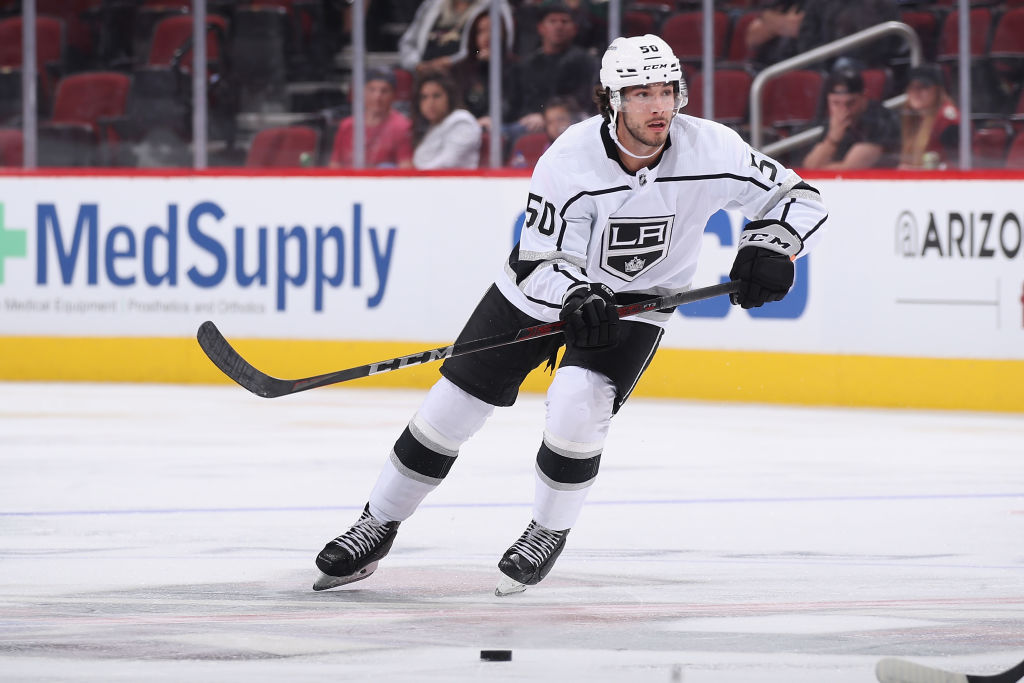 The LA Kings hit the ice this afternoon in Tampa, in advance of Game 1 of a four-game road trip against the ever-difficult cluster of teams in the Southeastern United States. It all kicks off tomorrow, at 4 PM Pacific time, as the Kings visit the Tampa Bay Lightning.

Here’s how the Kings lined up, roughly, during today’s practice –

The Kings were joined on the ice by defenseman Christian Wolanin, who was recalled by the Kings yesterday afternoon. Wolanin has had one of those all over the map kind of starts to the season, due to no decisions of his own.

Wolanin’s trajectory this season takes a list to properly document –

– Made the Kings out of camp
– Placed on waivers by LAK on October 16
– Claimed by Buffalo on October 17
– Played in one NHL game with the Sabres, November 8 @ WSH
– Placed on waivers again, this time by Buffalo, on November 30
– Claimed by the Kings, assigned to AHL-Ontario on December 1
– Appeared in three AHL games with the Reign (12/4, 12/10, 12/11)
– Recalled by the Kings Yesterday

And this is all well before the calendar flipped from 21 to 22. Wolanin accompanied the Kings to Florida and took part in his first practice back earlier today.

“The one thing about Christian is that he’s been in NHL practices for the last two months,” Todd McLellan said, of Wolanin. “He played a little in Buffalo, he’s had a chance to play some games in the minors and he’s been practicing at a high level. The type of game he plays, I think he can get back quickly. He skates well, uses his vision and his skill, so it will be the grinding part that he’ll have to adjust to quickly. Having the three games in American League will help.”

Wolanin replaces Alex Edler on the NHL roster, to bring the Kings back to seven defensemen after Edler was placed on injured reserve yesterday. Edler’s injury is a long-term absence, meaning the Kings are now without two of their six defensemen from Opening Night, combined with Sean Walker’s season-ending injury. Nothing new for the Kings, who were without Drew Doughty over the last month or so.

McLellan indicated that he’s spoken with Edler, via text message, after the injury. He shared that Edler, to no surprise, put the team ahead of himself in their conversation. He also noted that Edler can still be an important part of the team, with his presence in the locker room still valuable when it comes to the team’s younger defensemen, specifically Tobias Bjornfot.

Replacing that kind of player, both on and off the ice, is no easy task, and one that a group of individuals will be relied upon to do.

“I think it’s by committee,” McLellan said. “We’ve got Wolanin back, Olli Maatta is going to get an opportunity to play again, he’s been waiting patiently for that. It’s been good that Durzi has played well lately, we feel he’s filled a hole there. I do believe it’s going to be by committee as we go. We really felt Drew’s loss, and Walks’ loss, but we’ll also feel this one, because in Alex’s short time with us, he really has had an impact, not only on the ice but in the locker room, around the guys. He will be missed.”

With that in mind, expect to see Maatta in the lineup tomorrow, as opposed to Wolanin, with the former slotting into Edler’s place during today’s skate. Today’s practice showed that we’ll likely see the pairing of Maatta and Matt Roy, a duo that was used for an extended stretch after the Doughty and Walker injuries, once the Kings found settled pairings during that time. Doughty’s return came at the expense of Maatta, who has been a scratch in each of the five games since.

An opportunity for a player who has been up and down, in and out this season, to potentially find his place in the lineup. Maatta was an effective, low-event, third-pairing defenseman last season, though it took him time to find that place. The hope is that he can bring similar qualities for the Kings here this season with another opportunity to do so.

Another individual with an opportunity is defenseman Sean Durzi, who was mentioned by McLellan above and can be heard from in the above video. McLellan spoke positively of Durzi’s contributions today.

“I see confidence, I see somebody that plays with the right amount of risk for reward, he’s figured that out,” McLellan said. “I see somebody that can run a power play and I see somebody that’s improved. A lot of times, you bring young players up and you get that early energy spurt and all of a sudden in, game three and game four, it disappears and it’s oh, what do we have. I haven’t seen that in Durz. He’s maintained his level and arguably he’s gotten better. That’s a good sign for him and us.”

Durzi, an offensively minded defenseman who has produced on both power-play units, has also more than held his own at even strength. He’s on the positive side of shot attempts through seven games, controlling right around 51 percent of those opportunities. In terms of scoring chances, he’s also trended above 50 percent and sits slightly below in terms of high-danger chances.

While he’s been shielded slightly, with more than 60 percent of his shifts starting in the offensive zone, that’s to be expected for a young defenseman, especially on a team that featured two pairs capable of playing against the other team’s top lines. Partnering another young blueliner in Tobias Bjornfot, it’s been a formidable duo for the Kings thus far.

Lastly, if you are in search of watching live hockey this evening you might be out of luck……

The NHL game between Chicago and Calgary was the only one on the schedule for this evening, and that game was cancelled due to COVID Protocols on the Flames front. That leaves us with exactly zero scheduled games across 11 leagues in North America, including five men’s professional leagues, one women’s professional league and five major-junior leagues, across two countries.

For me though, it’s not a bad thing, because on the East Coast, the games start three hours later and here, at 5:30 PM on the East Coast. 5:30 PM and we’re not already halfway through the first set of games? Cmon Man!

If you all want though, I’ll see if I can rent an Xbox and stream the NHL video game on Twitch to fill the void for the evening. If not, I recommend Only Murders In The House on Hulu.

Back at it tomorrow morning, skate potentially optional, before the trip begins!