Angeles Analysis – How Sweep It Is + Wolanin / Edler Transactions 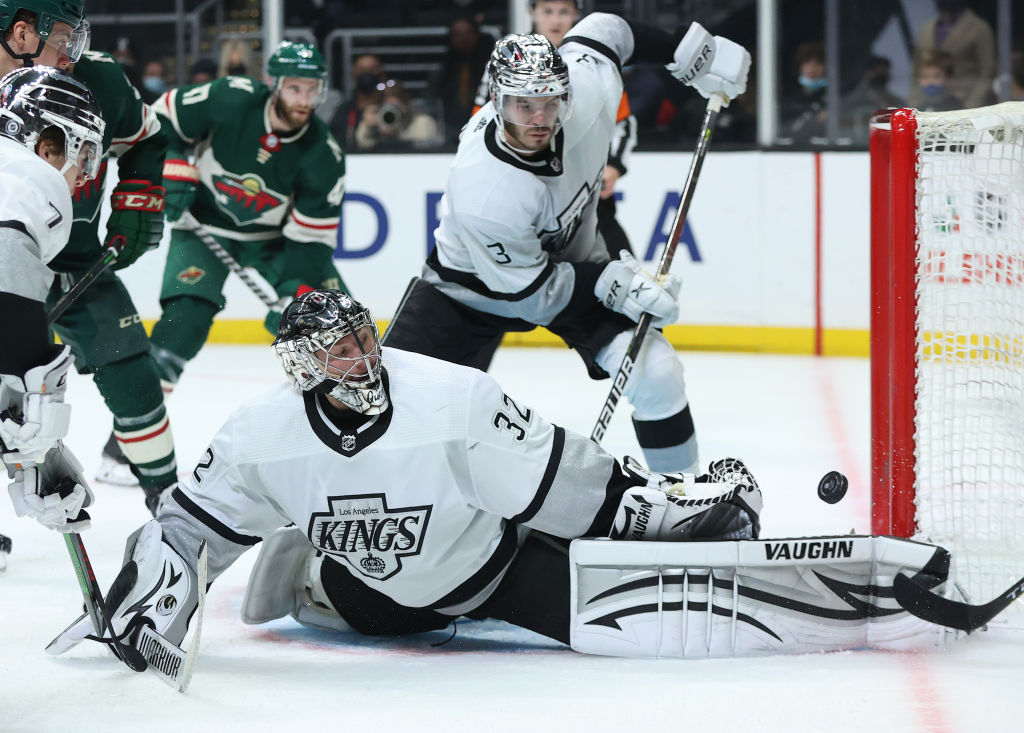 Couldn’t have asked for a better two-game homestand. Coming into STAPLES Center were the two hottest teams in the National Hockey League. The first, Dallas, was one loss removed from a seven-game winning streak. The second, Minnesota, was riding an eight-game winning streak.

Dallas scored 29 goals in the eight games leading into their trip to Los Angeles. They scored zero goals against the Kings. The Stars allowed no more than two goals in any of their seven consecutive victories. The Kings netted four.

On their eight-game winning streak, Minnesota scored 37 goals. Over their 11 games preceding yesterday’s meeting, the Wild were held under four goals just one time. Last night, they scored just once.

Two of these stories ago, following a homestand that saw the Kings win just once from seven games played, the focus was on the little details going against the team. Most of those defeats were one-goal games or essentially one-goal games. Over these past two wins, you saw those little details go the other way, resulting in Kings victories.

Those little details can be a timely save by Jonathan Quick, and we certainly saw plenty of those. The breakaway stop with the left pad in the Dallas game, with the score 1-0 stands out. It can be a defensive play – how about Sean Durzi making two of them to deny an odd-man rush against and spring one the other way against Minnesota. Or, it can even be a bounce.

I’d be lying to myself, and all of you, if I said that last scramble at the end of the Minnesota game didn’t create some terrifying flashbacks. A bounce is a bounce, and bounces don’t take stock of where your team is at, but I’m convinced that puck goes in the net against the Kings last season with the goalie pulled. Not sure how, not sure why, but tell me that puck doesn’t hit a skate, or the wrong rut in the ice, and go in. Last night it didn’t and the Kings were rewarded for a good effort playing 5-on-6, as they earned the two points against a very good team.

These two games provided a strong look at the team depth the Kings can feature when everyone is playing well and even just one of several injured players returns to action The Kings did a good job throughout their forward group of not only generating and maintaining momentum, but also producing. Of the six goals the Kings scored against Dallas and Minnesota, three came from the top six and three came from the bottom six. Both sixes scored two goals during the flow of play and one empty-net goal each. When a third-period goal was needed, either for insurance or to break the tie, it was the bottom six on both nights that found the breakthrough. We have yet to see that type of production on a consistent basis this season from the bottom six, specifically the third line in any of its many forms. Perhaps now could be a building block.

With Andreas Athanasiou back, he adds some serious speed and skill to the third line, pairing nicely with Arthur Kaliyev and Rasmus Kupari. With Blake Lizotte still yet to return and Quinton Byfield now in rehab mode in the AHL, not to mention other players currently excelling with Ontario, the outlook is certainly bright when it comes to depth. Getting more consistent production from the bottom six is important and the Kings got it over their last two wins.

The other element to that is defensive production. I happened to turn my eye to last night’s broadcast on Bally Sports West yesterday at the right time, to see the Mercury Smart Stat of the game. Across the NHL, the Kings ranked in the low 20’s in defensive shot attempts during October and November but were tied for second entering last night’s game throughout the month of December.

Without Drew Doughty and Sean Walker, that group was very solid in their own end, but struggled to produce offensively, not just in terms of goals and assists, but in shots taken and attempts generated. We started to see that tide turn during the Anaheim game when the Kings scored three goals off of point shots turning into deflections and rebounds. Starting against the Ducks, in the six games since Doughty has returned, Kings defensemen are averaging 2.3 points per game, up from 1.8 points-per-game during the time Doughty missed. Lots of ways to get that depth scoring and getting contributions from the back end certainly helps.

I would be remiss if I also failed once again highlight the performance of Jonathan Quick over the last two games. Well, we’re only writing about the last two games, but this is nothing new for the two-time cup winner this season. Amongst goaltenders with at least 15 games played, Quick ranks fifth in the NHL in save percentage and sixth in goals-against average. Now, I don’t want to be thought of as one of those people who references numbers because he doesn’t understand the game. No sir. But they’re an easy metric to compare players across the league and it doesn’t take a statistic to realize how outstanding Quick has been between the pipes.

The Kings – and the Insiders! – should feel good about those wins, over two very good teams.

The road ahead, however, certainly does not get any easier. The upcoming four-game road trip can be described only as a gauntlet. The Kings head to the Southeast for four straight away from home, and those four teams have a combined record of 69-21-15. That’s a .729 winning percentage for those keeping track at home. A quartet of stern challenges await the Kings, though they await with a bit of momentum behind the team, powering their flight across the country. As Todd McLellan noted last night, we’ll take any kind of momentum we can get right now.

The @LAKings have made the following player transactions:

Christian Wolanin (D) has been recalled from the @ontarioreign (AHL).

Alex Edler (D) has been placed on injured reserve.

A situation like this is exactly why the Kings re-claimed Christian Wolanin off of waivers from Buffalo. Obviously a really, really tough blow for Edler, both from a player standpoint and a team standpoint. Edler has been everything the Kings could have wanted and more as a one-year free agent signing this summer. Bringing a veteran presence, the ability to calm things down on the backend and solid play in all three zones, Edler had found a nice home on the team’s second pairing. Wishing him the best in his recovery from an injury that McLellan labeled “long-term” after yesterday’s game.

In Wolanin, the Kings recall a player who does have some NHL experience to his name. The 26-year-old defenseman has played 62 NHL games for three different teams, though all but four of those contests came with Ottawa between the 2017-18 and 2020-21 seasons. Wolanin skated in three games with the Kings last season, though circumstances outside of his control limited his time at the NHL level. When acquired via trade, the Kings had an immediate need on the blueline. Last season’s protocol, however, forced an extended quarantine, followed by some time to get back up to speed. By that point, others had returned, narrowing Wolanin’s window.

After a topsy-tervy start to his season, which has seen him skate in just four games – three with AHL-Ontario and one with the Buffalo Sabres, Wolanin should have a real opportunity to stick around at the NHL level with Edler’s injury keeping him out for an extended timeframe.

This story was posted from somewhere high above the continental United States. The team is current mid-air, on route to Tampa Bay, where they will practice tomorrow, a day before Tuesday’s game against the Lightning. More to follow between now and then, including what figures to be a roster update and a couple of feature stories on players and prospects.