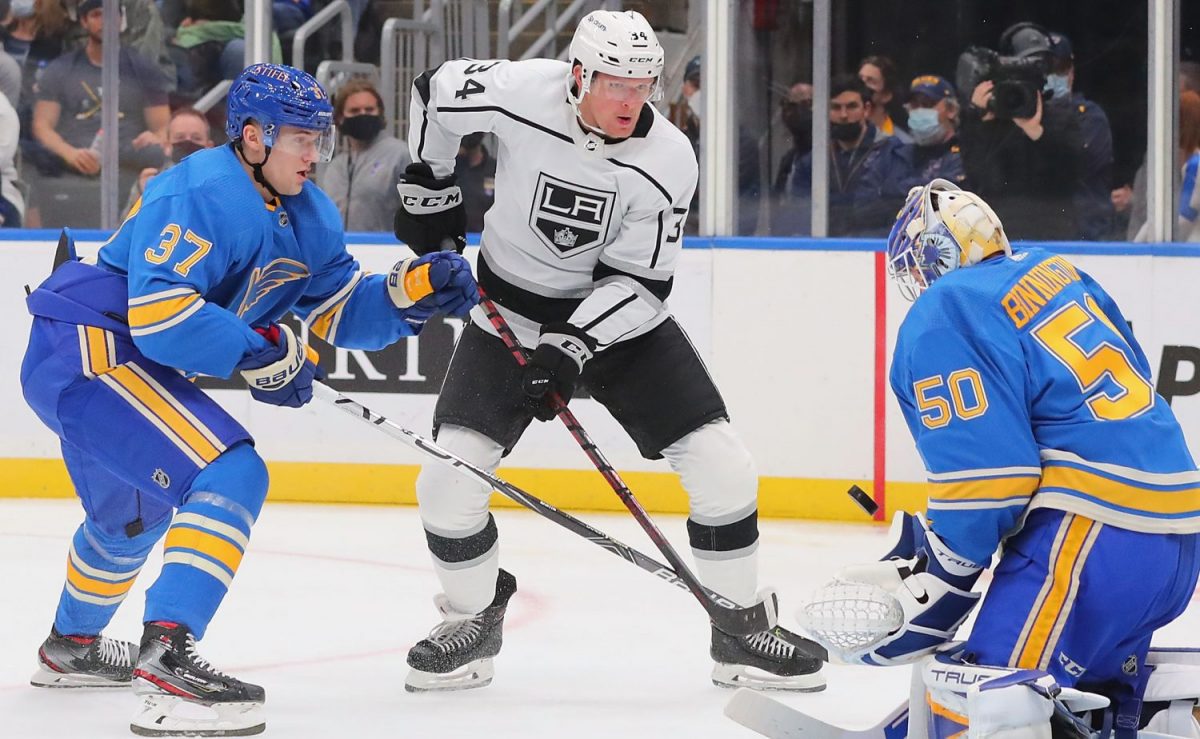 TONIGHT’S MATCHUP: The Kings conclude their first road trip of the season in St. Louis, with the second of two meetings against the Blues on this trip.

HEAD-TO-HEAD: The Kings were on the wrong side of a blowout on Saturday, with St. Louis skating to a 7-3 victory on home ice two days prior. Defenseman Alex Edler leads all Kings skaters this season with two points (0-2-2) against St. Louis, while forwards Dustin Brown, Carl Grundstrom and Alex Iafallo each scored in the defeat. Last season, the Kings found success against the Blues, winning five times, and taking at least a point from seven of eight games played.

KINGS VITALS: After a scheduled off-day yesterday, the Kings were back in action this morning, in advance of tonight’s game against the Blues.

Todd McLellan and his staff switched up the lines during the second period, and again during the third, with Arthur Kaliyev getting the chance to skate with Anze Kopitar and Alex Iafallo. We saw Rasmus Kupari moved back to the middle, Gabe Vilardi skating on the wing, and a set of four lines we hadn’t seen in any capacity to date.

“I think that’s why we changed things a little bit,” McLellan said, when asked if he liked anything he saw from the re-structured combinations on Saturday. “It’s tough to completely evaluate what’s going on when it’s 6-1, both teams play a little bit differently in those situations. We have to be careful about what we saw in garbage time, if you want to call it that, but yeah, we did look at some of those things.”

Fast forward to this morning and there was a bit of change to the change. The Kopitar line, which has skated together in each game to date, will remain so, but the other three lines had some mixing and matching.

Forward rushes this morning for the @LAKings –

Morning quotes from Kaliyev and Todd McLellan to follow on @lakingsinsider!

“We’re still early in the season, we’ve liked a lot of our play and we’ve disliked other elements,” McLellan said. “We haven’t shuffled things around that much, there’s minor movement, it’s not a complete blender. We played the second and third periods with scrambled lines the other day and we’re looking for some chemistry and some production from lines that are not Kopitar lines.”

On the backend, as reported on Saturday, early indications regarding Drew Doughty’s injury is that there is no ligament damage, but additional imaging is required once the team returns home. We’ll see if Wednesday’s practice back at home lends any further information on a potential timetable for Doughty’s return, but he did not skate this morning.

Olli Maatta checked in for Doughty on Saturday, while Austin Strand was recalled from the Ontario Reign. If this morning’s skate is any indication, expect to see Strand make his season debut this evening, which gives the Kings a traditional balance of three left-shot and three right-shot blueliners in the mix.

Here’s how the defensemen lined up earlier today –

BLUES VITALS: The Blues also skated this morning, but reports show just a couple of tweaks to what we saw on Monday. The changes speak to the depth that St. Louis has, with Monday’s lineup not including forward Pavel Buchnevich (suspension) or Brandon Saad (COVID Protocol), and still looking mighty deep. Buchnevich is expected back in tonight, while Saad did not skate.

Todd McLellan spoke on the depth that the Blues have and carry into tonight’s game.

“Their depth, they’re a deep team,” he said. “Up front that’s as deep a team as we’ve seen all year. The home opener, we expected them to play the way they played, they played with pace, with some authority along the boards and in and around the blue paint at both ends. They played towards their identity and when you have that type of depth, that type of experience, you’re going to win more than you lose.”

In net, goaltender Ville Husso was the first off this morning, so we might get a look at him for his first start of the season. The Kings faced Husso twice last season, with each team winning once. The Finnish netminder posted a 1-1-0 record, a .891 save percentage and a 3.60 goals against average from his two starts versus LA during the 2020-21 season.

Per Jim Thomas of the St. Louis Post Dispatch, here’s how the Blues lined up during toady’s morning skate –

The Man In Gray
Line rushes this morning saw Arthur Kaliyev shift from the white group to the gray group, which signifies the top-six forwards.

Kaliyev has had a mixed bag so far this season, as you’d expect from any young player, but after he was inserted back into the lineup on Friday in Dallas, he played an effective game against the Stars, and tallied his first career NHL assist. Fast forward to tonight, and the expectation is that Kaliyev will skate alongside Alex Iafallo and Phillip Danault on the team’s second line, which could, on paper at least, be an effective unit.

Danault is skilled at both ends of the ice, while Iafallo has shown the ability to forecheck aggressively, win pucks back and set up others. I asked Kaliyev how he felt the games of his new linemates might help his own, and he focused on certain traits that could help set him up for success.

As he continues his transition from the AHL to the NHL, Kaliyev also spoke this morning about how he continues to settle in here at the top level.

While not a burner, Kaliyev feels that his skating is improving, and his ability to match the NHL pace is improving as well. There’s a difference between being fast and playing fast, and for players like Kaliyev, the latter is important. As he continues to gain that NHL experience, he’s hoping to continue to adjust and play at an NHL pace.

Stranderson
This morning’s skate revealed that Austin Strand skated alongside Mikey Anderson during the first pass of line rushes, indicating that he might make his season debut tonight. Olli Maatta played his own first game of the season on Saturday, and would appear to be the likely man out in place of Strand.

The 24-year-old defenseman made his NHL debut last season, eventually playing 13 games with the Kings during the shortened season. Strand impressed during his time up with the Kings, showing a good combination of size and skating ability, while displaying a quick, hard first pass that wasn’t necessarily the book on him at the minor-league level.

Speaking with McLellan this morning, it’s that version of Strand he’s hoping to see with the Kings.

“One, he has size,” McLellan said. “He’s willing to play with a physical element, he got pucks off his tape quickly and there’s talk about him playing a little bit differently up here than he does down [in the AHL]. Here, he moves pucks quickly, there he feels like he has a little bit more time and we like the quick-moving Austin, where he gets pucks off his tape, gets it up to the forwards. He plays well in the blue paint, he’s good below the goal line and that’s important against a team like this.”

I wouldn’t call Anderson – Strand a regular pairing during the 2019-20 AHL season, by any means, but they played together a couple of times throughout the season. The potential insertion of Strand returns Anderson to the left side, as a left-shot player, while restoring the preferred balance of three left and three right shooting blueliners.

Strand has shown some offensive instincts with the Ontario Reign and playing with the safe and steady Anderson could prove to be a good match. It’s the simple side of the game, though, that the coaches are looking for, and the Austin Strand we saw when initially called up last season, lauded for his efficient style of play, would be much welcomed.

Lastly, leaving you with Todd McLellan’s final quote from this morning, on his expectations of tonight’s game

“I expect us to be better, just flat-out better all over the place. I don’t know what the result is going to be at the end of the night, we’re certainly hoping for the best, but I believe that we are going to be better, to a man, for 60 minutes in all three zones. Obviously, the special teams was a disaster the other day, if you’re in those situations you’re a special player, that’s why they call it special teams, so let’s get a real good performance in that area. We don’t have to be perfect, but we have to be a lot better than we were.”

By Zach Dooley
52 Comments
Behind the Scenes