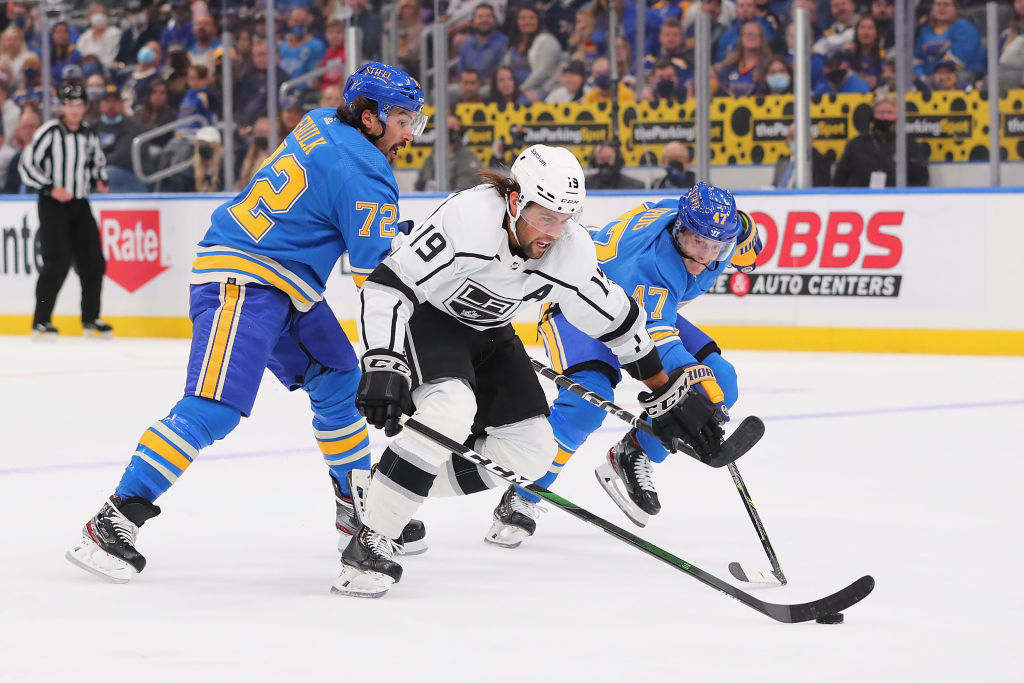 The LA Kings fell to 0-2-1 on their first road trip of the season, following a 7-3 defeat against the St. Louis Blues.

For the fourth consecutive game, the Kings opened the scoring, with Alex Iafallo getting rewarded for an energetic first period. After defenseman Alexander Edler kept in the puck at the left point, his shot was blocked down right to Iafallo, who beat St. Louis goaltender Jordan Binnington on the blocker side for the game’s first goal.

The Blues fought back with two of their own, however, on special teams to take a one-goal lead into the first intermission. First, forward David Perron fired a one-timer from the left-hand circle that beat Cal Petersen on the glove side to tie the score at one. Just over four minutes later, Ivan Barbashev put the hosts ahead while shorthanded, as he scored on the backhand off of a partial breakaway.

After a pretty evenly played opening period, the middle stanza was all St. Louis, with the Blues tallying three goals in quick succession to open up a commanding lead. Perron opened the scoring 45 seconds in with a re-directed effort from the top of the crease, before Jake Neighbors buried a Brayden Schenn feed at the back post to make it 4-1. The hosts got their second power-play goal of the evening from Ryan O’Reilly, in tight, to take a 5-1 lead into the second intermission.

After forward James Neal made it a 6-1 game, with the third power-play goal for St. Louis, the Kings pulled two back to get to within three. First, Dustin Brown finished off a nice passing play, architected by Viktor Arvidsson and Sean Walker, shortly after Neal’s goal. Just over five minutes later, forward Carl Grundstrom buried a rebound off of an Edler point shot to make it a 6-3 game.

St. Louis capped off the scoring for the evening with its fourth power-play goal of the game, as Perron completed his hat trick with another one-timer.

Hear from Iafallo and Head Coach Todd McLellan from after the game.

Alex Iafallo
On if tonight’s game was about more than just the team’s play on special teams
It was kind of everything, it’s definitely not a game that we want to play, we’re embarrassed right now. Obviously each period, we’ve got to come together, whether it’s the power play, penalty kill, everything hurts tonight. We’ve got to bounce back and come together.

On the keys to an improved result in the rematch on Monday
Take a good look at ourselves tonight, take a look in the mirror, and remember our mistakes. At the same time, we’ve got to come together, talk more, take care of our chances, eliminate their chances.

On if there’s anything from playing last night that makes the team more prone to taking penalties, harder to take penalties
That shouldn’t be a factor. Some people might think it does, but you have to go out and do your job, take care of the penalty kill, the power play, everything. We’ve got to snap back from this and learn from what we did.

On what happened after a strong start to the game
I guess we just let up. We talked about having a good start and jumping on them, but we have to stay on them, in the offensive zone, keep going forward. We need all three periods next game and we need to be ready to go.

Todd McLellan
On if he agrees with Iafallo that tonight was about more than special teams
Yeah, for sure. If the rest of your game isn’t any good then the special teams aren’t going to be, but I think that set us up for the whole night. When you’re minus five in special teams situations, it’s not going anywhere for you. That’s the worst I’ve seen us penalty kill, maybe in the NHL, since I’ve been here, so that was very disappointing and our power play was just as bad. Obviously your 5-on-5 game isn’t going to be very good when that’s as bad as it is.

On what needs to change with the penalty kill
Faceoffs, retrievals, battles, blocked shots, clears, seams, goaltending. All six or seven of those things, so we’ve got a lot of work to do.

On what the team can change between now and Monday’s rematch
We’ll rest, we’ll look at the video and we’ll figure things out.

– Defenseman Alexander Edler collected his first point with the LA Kings organization, and his first multi-point game with the organization, in tonight’s defeat. Edler finished the evening with two assists and was +2 for the game.
– Forwards Alex Iafallo and Carl Grundstrom each collected their first goals of the 2021-22 season this evening.
– In Drew Doughty’s absence, defenseman Matt Roy led all Kings skaters with 21:43 time on ice. Sean Walker also played more than 20 minutes (20:19) on the right side.

Following the back-to-back, the Kings are not scheduled to practice tomorrow, and will be back in action for morning skate on Monday in St. Louis.