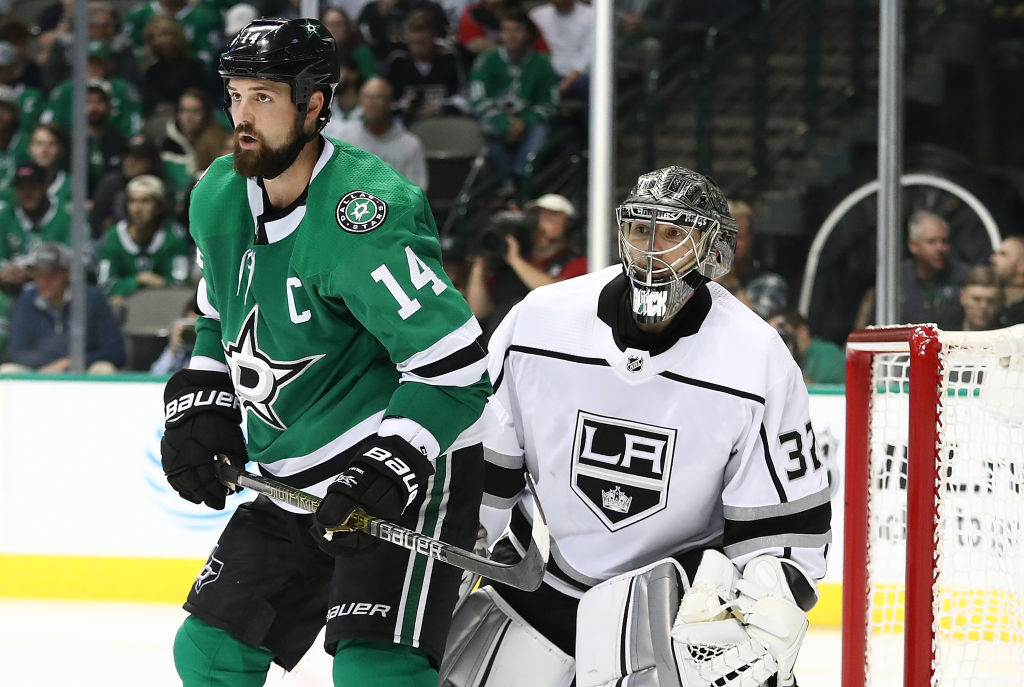 TONIGHT’S MATCHUP: Following two practice days in Texas, the LA Kings are back in action this evening, with a meeting against the Dallas Stars coming up later on tonight.

HEAD-TO-HEAD: The Kings return to Dallas for the first time since January 17, 2019, when LA defeated their Lone Star hosts by a 2-1 final at American Airlines Center. Forward Anze Kopitar has 57 points (19-38-57) from 62 career games played against the Stars, while forward Dustin Brown leads all active Kings with 22 goals head-to-head, including one the last time the Kings were here. Dallas is one of five teams that Brown has scored at least 20 career goals against.

KINGS VITALS: Goaltender Jonathan Quick was first off this morning for the Kings, making him tonight’s projected starter in net, while continuing the team’s early-season goaltending rotation.

Speaking with Todd McLellan after morning skate, he did indicate that the rotation for tonight and tomorrow was pre-discussed, and with both goaltenders putting in a solid performance last time out, there was no reason to deviate from that plan.

Quick has pretty solid career splits against the Stars, entering this evening with a 17-12-3 record from 32 career appearances, to accompany a .910 save percentage and a 2.54 goals against average and two shutouts. Throughout his storied career, Quick has squared off against just five teams more often than Dallas.

In terms of skaters, our observations from yesterday’s practice have held true this morning, with the expectation that we might see Arthur Kaliyev checking into the lineup in place of Vladimir Tkachev. On the backend, the group appears set, with the pairing from the first three games still intact this evening.

“Were putting some size in the lineup, and Arty is a big man,” McLellan said. “He’s got size, he’s got a shot and use both of those and you’ll be fine.”

Here’s how the rushes set up this morning –

STARS VITALS: Like the Kings, Dallas has not played since Tuesday, though unlike the Kings, tonight will be their first game on home ice this season. The Stars concluded a season-opening road trip three days prior, as they earned a split from four games played against teams from the Eastern Conference.

Braden Holtby will get the start tonight for Dallas, as he enters the evening as one of the league’s hottest netminders from the opening week. Holtby is 2-1-0 from three starts, with his .947 save percentage ranking tied for third amongst goaltenders with at least three appearances. Of the teams that Holtby has started against, he has faced none fewer than the Kings. The 32-year-old goaltender brings a 2-2-1 record, a .916 save percentage and a 2.41 goals against average into tonight’s contest.

Per Mike Heika of the Dallas team website, John Klingberg, Jason Robertson and Blake Comeau have all been ruled out for tonight’s game with injuries.

In the first 20 minutes, the Kings were chasing the puck, and in McLellan’s eyes, losing faceoffs was a key part of that. The Kings won just 5 of 18 faceoffs in the first period and as a result, McLellan felt they spent the first 20 seconds of most shifts chasing a puck, and by that point in the shift, players were tired, changing, which set up the next line out on a similar path. If it was a whistle, the Kings weren’t winning those faceoffs either.

“The first period was us chasing the game and coaches use this language all the time, but we didn’t have the puck enough,” McLellan said. “I believe that faceoffs are really important, it’s the first opportunity to compete, it’s a 1-on-1 battle, it’s usually fair in the sense that everybody is positioned and the gun goes off, who’s going to get the [puck], and we didn’t have it at all.”

Against Minnesota on Saturday, the Kings also were on the losing end of the faceoff battle. In their first game against Vegas, the night the Kings had their best start to a game, they were on the positive end in the dot during the opening period. So, there is some semblance to that. Win your faceoffs, control the puck, play the way you want to play.

That is an obvious point of emphasis for the team in Dallas, playing in what figures to be a high-energy away building, on opening night here for the Stars.

“We spent 20 seconds chasing them around, in our end usually, and we finally get it and your gas tank is almost on empty already, it happens that fast, especially early in the year,” McLellan detailed. “Flip it out, give it back to them and start all over, you’re never ahead. I just think rarely are you ever ahead when you can’t win your fair share of faceoffs. For me, that was some of our issue in the first period.”

Playing tonight in Dallas will have some similarities to the game in Nashville the other day, in terms of the atmosphere.

On Opening Night here, the expectation is a capacity crowd at American Airlines Center, that will likely provide energy early. The Kings have the Nashville game under their belts, and tonight won’t be exactly the same, but it’s something to think about. Can they use the experience from Nashville to come out better tonight?

“For as much as we talk [about these buildings], you have to live it once or twice, and a lot of players have now lived a game in Nashville, and they should understand next time,” McLellan added. “Until you feel it, it’s not the same.”

Doin’ It In The D-Zone
While the Kings’ struggles to convert the chances they are getting has been the story thus far, and rightfully so, they have been relatively solid at the other end of the rink.

Seven goals allowed from three games played is good for tenth best in the NHL in terms of goals against per game. I know……it’s not what you want to hear, and the buzz around this team is that a change to a more aggressive style of play will result in more goals. I get it, and McLellan does too.

We also can’t ignore though that the Kings have been pretty good at preventing goals thus far. Looking at the two losses, 3-2 and 2-1, the Kings had the opportunity to win both games.

In both games, during the stretches that saw LA play well, had they gotten another one to go offensively, it changes the game. It was their defensive play, and goaltending, that had them in the game, though.

“Yeah, I think when you have those numbers, you have a chance to win every night,” McLellan said. “I look at the Minnesota game, we gave ourselves a chance to win with the goaltending and the defensive side, just not with finish and offensive chances, and that was certainly the story in Nashville. They out-chanced us at the end of the night and had more opportunities but we were still there.”

Most of the miscues at that end of the ice have been one-off errors, or individual mistakes, rather than breakdowns as a unit, or of the system.

With that in mind, the adjustments the Kings are looking to make aren’t large-scale overhauls, but rather a focus on the finer points and the details that are important. Speaking with Blake Lizotte earlier today, he called those smaller details the team’s points of emphasis heading into the weekend noting that it’s those things that win and lose games.

“We haven’t felt we’ve been dominated, or the shot totals haven’t been crazy different,” Lizotte said. “It’s the details of the game that win and lose in this league. It’s about cleaning those up, ultimately, that’s what wins and loses games.”

Fourth-Line Fury
After Wednesday’s practice, we spoke with McLellan about the performance of the fourth line, and how he liked the way that unit performed in their first game together.

“The three of them were good, I thought they all had a burr up there and they wanted to prove to us as a staff, and to their teammates, that they were there to play and they played,” he said. “I thought it was really good. They were rewarded with more ice time in the second and third periods, and they were involved in a lot of the game positively.”

Talking with the center of that unit this morning, Lizotte, he’s been happy with how the line has looked in its infancy. With just the one game together, we’re not at a “give this line a name” stage, but we are in an “excited to see them play again tonight” stage. The expectation is that the unit will stay together, with three workers sharing a common goal.

“I found some chemistry with Grundy and Ras, we’re just workers, we worked pucks into our favor, got pucks to the net, and we’ve just got to bury them,” Lizotte said.

The thought of a more aggressive system seems to fit those three players quite well. Lizotte is a motor, who works as hard as he can every time he’s on the ice. Grundstrom and Kupari add a little bit more size onto that line, with both players also possessing an ability to play with tenacity in their games. Sometimes, those types of players can gel together and produce something that is a pain to play against.

“I think that everyone on the team loves the way the coaches are preaching this more aggressive system,” Lizotte added. “Everyone loves playing it, everyone wants to play offense and it’s worked out for us for the most part, so far. We’ve kept more pucks alive in the o-zone and I don’t think it will be too long until we see the goal count go up.”

Kings and Stars, coming up tonight at 5:30 PM, California time.

By Zach Dooley
48 Comments
Behind the Scenes