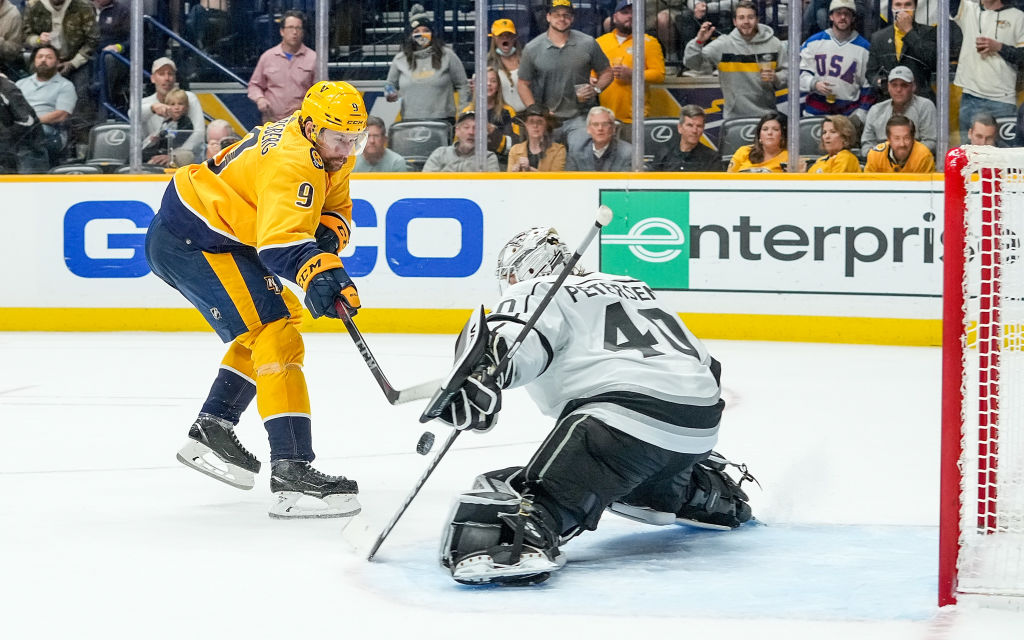 The LA Kings returned to the ice this afternoon in Dallas, following last night’s game against Nashville, and in advance of Friday’s matchup with the Stars.

Looking at today’s practice, while the beginning appeared to be more of a “get the legs moving” type of skate, Todd McLellan noted that he felt the group that the practice didn’t shake out that way. On the ice, the group was able to get things done that they needed to get done. Considering the two days here of practice in Dallas that’s important.

“Today wasn’t as much about getting the legs moving, we worked on things we thought we needed to do,” McLellan said. “I thought, for a day that could have been a write off day, could have just been about getting the legs moving, it turned into a pretty productive day. Areas of the game that we needed to work on, we got that done in 45 minutes to an hour, and in turn there were players that needed a day to get healthy. We tapped both sides.”

Regarding today’s alignment, McLellan noted there were a few players who needed the day off today. With two days in between games, meaning two full days of practice ice, there was an opportunity to give certain players the day off the ice. Today, that group consisted of Drew Doughty, Viktor Arvidsson and Phillip Danault.

“We’re three regular-season games, seven exhibition games, a month and a half in, there’s some bumps and bruises, some maintenance situations that players need the time for,” McLellan said. “Had we played tomorrow, they’d have all been on the ice, but we have to manage that and keep them healthy when we can.”

Here’s how the Kings aligned this morning:

A few quick hitters from Todd McLellan below, from after today’s practice.

Game Management
Yesterday evening, McLellan talked about the importance of game management, and how he felt, in his eyes, it was that aspect of the Kings game that cost his team in Nashville. Asked after the game about how you work on those areas, while he did talk about the ability to put players into practice situations when tired, and see how they respond, he put a lot of it onto experience, while noting that certain individuals making certain mistakes are players who do have some experience.

He expanded on that a bit more this morning –

“Faceoffs for example, we chased them the whole time, because we spent the first 20 seconds of every shift trying to get the puck back. Now, you get it back, and at the 25-second mark you’re tired, it’s that taxing of a game and you can’t be productive. We did that for the whole first period. Second period, things were going good, shift length got a bit long later and we had a couple of guys mismanage pucks later in shifts and things started breaking down. We had guys stretching in behind us on a couple of plays and that’s game management. We took a penalty right at the end of the period, which was probably one we didn’t need to take. Some situations like that are game management. We talk a lot about passing on a good shift. If you’re just surviving at the end of your shift, the line coming out is likely just going to be surviving at the start. Those are game management things we’re talking about, situational things, and it’s something our team, quite frankly, needs to get better at.”

Fourth Line For Sure
McLellan praised the play of the line listed as his fourth unit last night, consisting of Blake Lizotte at center, with Rasmus Kupari and Carl Grundstrom on the wings. That line all things considered, played just about the same amount at even strength as the line listed above them, with everyone involved factoring in right around ten minutes on the evening.

While he was high on the play of that group last night, he expanded further this morning –

“The three of them were good, I thought they all had a burr up there and they wanted to prove to us as a staff, and to their teammates, that they were there to play and they played,” he said. “I thought it was really good. They were rewarded with more ice time in the second and third periods, and they were involved in a lot of the game positively.”

Looking at one member of that unit specifically, Rasmus Kupari has played now each of the last two games on that line, with Lizotte and Grundstrom last night, and Lizotte and Trevor Moore on Saturday against Minnesota.

One of the last players sent down to the AHL at the beginning of the season, Kupari has come up with an attitude that says he doesn’t want to go down again. Utilizing his skating ability, and showcasing the necessary tenacity that is required to succeed outside of the Top 6, it’s been a solid two games for the young forward.

“He has great legs, the tenacity is on the puck the whole time,” McLellan said, of Kupari. “He shows up in chances for, where other guys aren’t right now on other lines. The ability to play both center and wing is valuable for him right now, but I think he’s got an attitude right now of I’m going to show you, and that’s great. That’s going to make others uncomfortable.”

Go See Cal
What you saw on your TV screens, and what I saw from the press box, was exactly what McLellan saw from the bench from his goaltender yesterday afternoon.

Cal Petersen made 29 saves on 31 shots, including several high-danger looks, especially towards the end of the second period. The final few minutes of the middle stanza included a breakaway, a penalty shot, and a cross-crease one-timer, all of which were kept out by the Iowan.

“He was sharp right off the bat, and all the way through the game,” McLellan said. “He made some really good timely saves too, he got us some whistles when we needed them, when we needed to breathe. They created a number of chances off of their faceoff wins, with a lot of traffic, and Cal had to fight through that. It was a good night for him. Unfortunately, we didn’t give him enough to come away with a win, the same thing with Quickie against Minnesota. He played a pretty good game, we just didn’t give him enough.”

That, right there, is the type of performance the Kings want to see from Petersen, just ideally with a little bit more run support behind him. With a back-to-back coming up this weekend, we’ll likely see a game apiece from both Petersen and Jonathan Quick, with one playing on Friday in Dallas, and the other on Saturday in St. Louis.

We’ll have plenty of content over the next couple of days from Dallas, with a look into the underlying chance-creation numbers of the season line, plus full coverage of tomorrow’s practice and a couple of off-ice feature stories debuting on LAKings.com

By Zach Dooley
51 Comments
Behind the Scenes