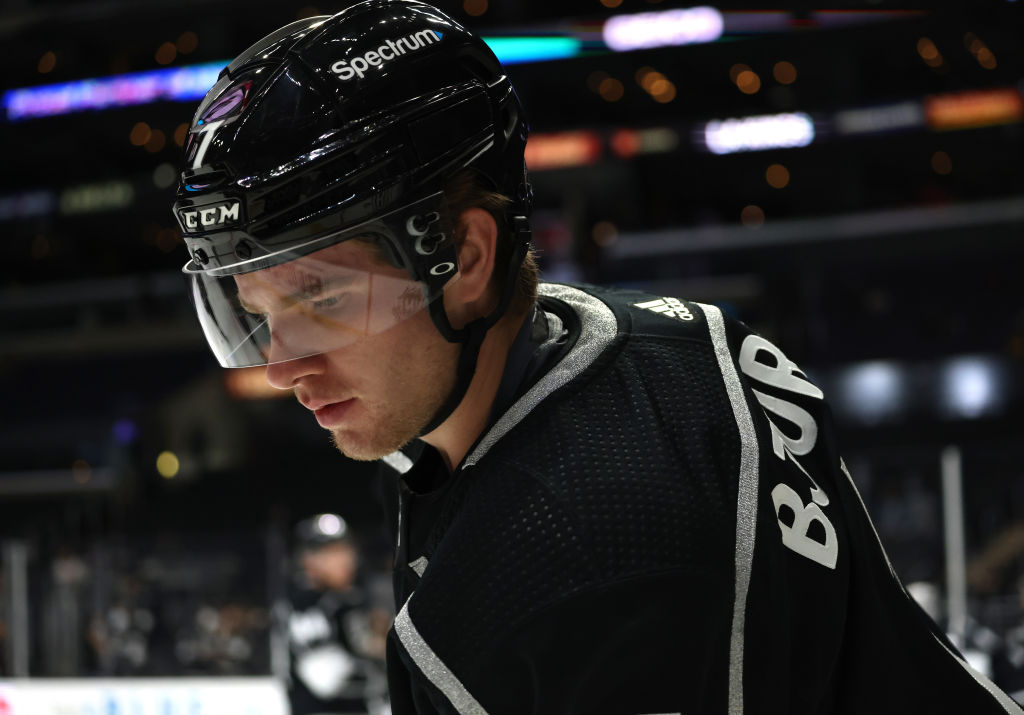 With a two-game homestand behind them, it’s on to Nashville for the LA Kings.

The Kings picked up a split on opening weekend at home, following Thursday’s 6-2 win over Vegas and yesterday evening’s 3-2 loss against Minnesota. We saw a high-flying game on Thursday, followed by a more tight-checking, gritty one last night. The Kings proved successful in the former, and had some growing pains with the latter, ultimately resulting in two of a possible four points.

Now on the horizon is something new for this team – a real road trip. I’d like to say that gone are the days of multiple games in one city, but here we are, trip one, with the final two games both taking place in St. Louis. Regardless though, this is a return to a much more normal sort of travel, with the team also set to visit Nashville and Dallas, two teams they did not see last season.

Todd McLellan made light of today that he’s never been to either city as the Head Coach of the LA Kings. Back in 2019-20, the team was slated to visit both cities in a late-March trip that was wiped out with the remainder of their regular-season schedule.

“Now we’re getting into uncharted territory,” he noted. “Interestingly enough, I haven’t been to Nashville with the LA Kings, I haven’t been to Dallas with the LA Kings, and we’re going into year three. When COVID shut the season down two years ago, the next road trip was Dallas and Nashville. It’s been that long since we’ve played against these teams.”

Looking at the here and now, the Kings aligned this morning with a slightly different configuration, elevating Trevor Moore into the Top 9, with Arthur Kaliyev sliding down in the lineup. Here’s how the Kings set up during today’s practice.

A couple of notes here.

– Seeing a slight personnel alignment on the third line isn’t necessarily surprising, with the third line controlling less than 40 percent of shot attempts through the first two games. Talking with Todd McLellan this morning, he uses some raw, shot-attempt numbers related specifically to the third line, and their creation metrics. That line has perhaps missed the aggressive, forechecking element of Lias Andersson, with Andersson’s tenacity and skating abilities bringing a different element.

“I look at our events, if you want to call it that, an analytics word, what’s occurring in a game and I think we’ve attempted 145 shots in the two games, a number of them got through, some missed the net, and the total for those three was seven, that’s four percent of what we had. That’s not cutting it. To do that, you’ve got to put yourself in a position to shoot, get pucks back, and they haven’t done it. Those three have to pick it up a notch as a line, if we keep them as a line.”

Regardless of the shakedown, it’s clear that something needs to change. The counts are a bit different depending on the website you use, or how they are calculated, but the percentage McLellan gave is pretty consistent across the board.

Considering the above notes, it wouldn’t be surprising to see Trevor Moore inserted into that role on Tuesday, as he was today, as he brings some of those same attributes that Andersson does. For that though, we will have to wait a couple of days with the Kings off tomorrow.

– In terms of those not on the ice today, McLellan indicated that Andersson, Andreas Athanasiou and Brendan Lemieux all appear unlikely to take the upcoming trip with the Kings. Andersson (lower-body) and Athanasiou (upper-body) continue to work their way back from injury, while Lemieux was added to the non-roster / COVID-19 list yesterday afternoon.

“Andersson didn’t skate today, he’s likely not going to make the trip, from what I understand,” McLellan said. “What was a little bit more of a short-term injury has extended itself out a little bit longer.”

On the bright side, defenseman Olli Maatta, who was activated from injured reserve yesterday, will make the trip, giving the Kings seven healthy blueliners to choose from. As it stands right now, the Kings have 22 players on the active roster, with the ability to add one more if they so choose.

– Lastly, in terms of the defense, through two games, the 5-on-5 ice time has been pretty consistently distributed between the Edler/Walker pair and the Bjornfot/Roy pair, though the former has logged about one minute more per game in even-strength situations.

Based on last season, the pairing of Bjornfot and Roy was commonly refereed two as the second pair, which is how we started this season. Two games isn’t enough of a sample size to say that’s wrong, but it seems to be a pretty even distribution of minutes, situationally dependant, behind the top duo of Anderson and Doughty.

On The Road Again
A commonly referred to narrative is that an early-season road trip can be a good opportunity for teams to bond, getting into away cities, where it’s just the team.

Last season was obviously a different situation, though elements of the process gave the team different ways to connect, as indicated below. Protocols made doing things like going out to eat, or even spending time in someone else’s hotel room, not doable, though the team was together in a variety of other ways. This season has some of these protocols relaxed, which gives a team still integrating new players, and new concepts in general, a chance to grow closer on the road.

“The going out to dinner part is fun, and I think that’s a different way of bonding, it’s without the parents or the teachers around you,” McLellan said. “We had that last year, where the coaches were there, the management was there…I think they’re looking forward to the freedom of space, wondering and telling some stories they don’t want to tell around the coaching staff.”

He was also quick, though, to not discount the different type of bonding experiences the team had last season. This year, protocols are much more relaxed on the road, but last season, the team spent all day, every day together, and ate all meals together on the road. It was certainly not the same, but it also wasn’t bad from a getting closer standpoint either.

“I thought last year, we spent a lot of time together,” he added. “It would’ve been nice to get away, but when we were [on the road], we learned a lot about each other, things we probably didn’t know because we were together so much on the road. It can work for or against you, but don’t discount what last year did for us as well.”

For the Kings, getting out again and experiencing different cities on the road is a welcomed thing. Players talked throughout the preseason about their excitement in getting back into a more normal routine.

For Viktor Arvidsson, that first stop for him is Nashville, where he had spent the entirety of his career before this season. We’ll save that part of the conversation for Tuesday morning’s game preview, but he agreed when asked if an early-season road trip, in general, is something that can help newer players such as himself integrate into the group.

“Yeah, it will be fun,” he said. “Last year was hard for everyone, I think it’s going to be a lot of fun with a new group, new faces. I’m looking forward to it.”

Bjorn & Raised
Lastly, hear from defenseman Tobias Bjornfot, who is working his way through his second full season at the NHL level.

Bjornfot spoke on last night’s game against Minnesota, as well as activating more as a defenseman, using the rush to create additional offensive opportunities, as well as the bond he’s formed with fellow Swedish blueliner Alex Edler.

The Kings are traveling to Nashville tomorrow, and will not practice. The team returns to the ice for morning skate from Tennessee on Tuesday morning.