Now a part of the opening night roster, the stage is set for Arthur Kaliyev 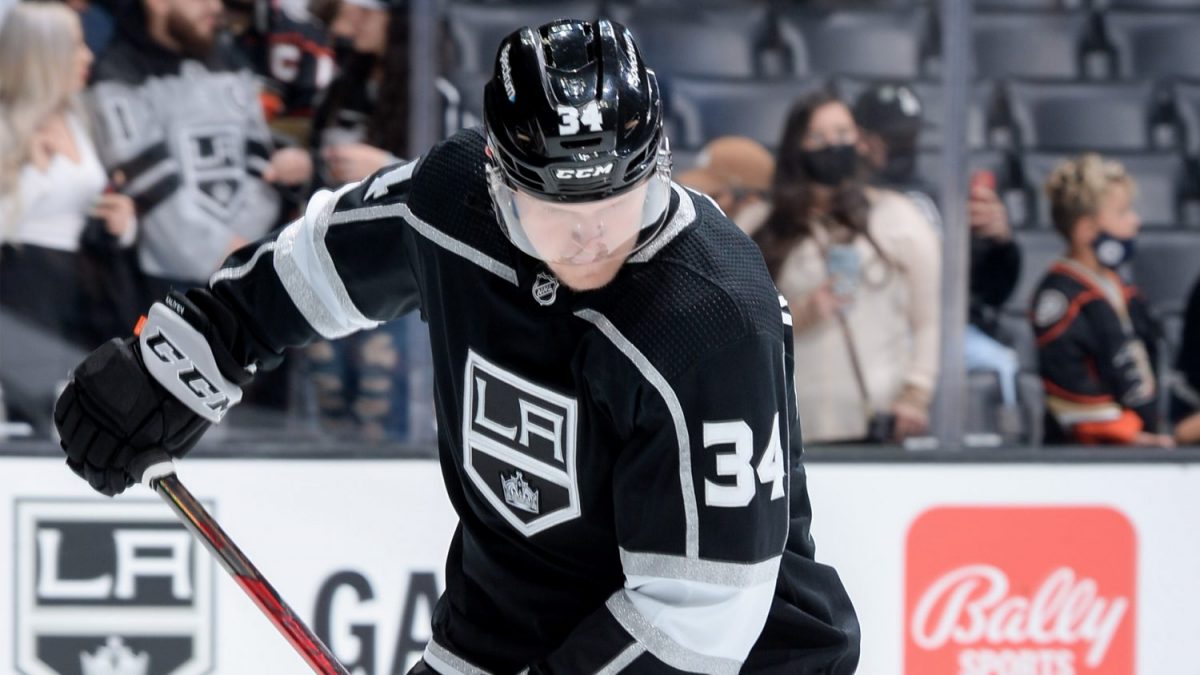 “One man’s misfortune is another man’s opportunity to take advantage of it.”

After the extent of Quinton Byfield’s injury was revealed, resulting in a long-term absence, it became clear that a spot on the opening-night roster for the Kings was now available, with several players in contention to claim it. The team’s second-to-last preseason game, at Honda Center against Anaheim, was the setting for the tryout.

On that night, the Kings dressed a lineup of hopefuls, with the majority of those skating that night still in contention for a roster spot, sitting on either side of, or smack-dab on, the bubble. As the Kings went down early, the situation presented itself for a player to step up, and the man who did so was none other than Arthur Kaliyev. Kaliyev scored three goals in the comeback win over the Ducks and showed off a well-rounded game that included success playing along the boards, making plays, being responsible defensively, and of course, putting the biscuit in the basket.

“Arthur had a great night,” Todd McLellan said, after Kaliyev’s game in Anaheim. “There’s going to be a lot of talk about the goals he scored, and they were nice goals, he put himself in a real good position, but shift after shift, he was positioned well, he made good plays along the boards, he managed the puck well, he used his size when he needed to, I don’t recall him [making an error] defensively at all. A lot of other attributes to the game that are really important that came into play tonight in his game, and guess what, he was rewarded.”

Over the following days, several players were moved from the NHL roster to that of the AHL’s Ontario Reign, competing for spots at the AHL level. One such player who was not was Kaliyev, who was one of 14 forwards submitted by the Kings as a part of the team’s opening-night roster yesterday afternoon.

The work is only beginning for the 20-year-old winger, however. Though he cleared the hurdle most directly ahead of him in the process, he’s still just begun to establish himself at the NHL level. Kaliyev was once again solid on Saturday against Anaheim, and now the look ahead to Thursday’s regular-season opener begins. Will Kaliyev feature against the Golden Knights, and if so, what role? 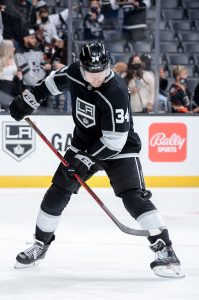 You have to imagine he’s thinking about it, even though he’s saying all the right things to suggest otherwise.

“It feels good [to make the opening-night roster], but I’ve got to keep going out there and not take any games or shifts off,” he said. “I’ve just got to keep it going and try my best out there, play hard and play fast.”

With Kaliyev now firmly in the mix, the question posed to the coaching staff is how to make the most of his strengths and his abilities. Kaliyev is a goalscorer by trade, but he’s growing into more than that as he’s developed at the professional level.

He spent the abridged 2021 campaign almost exclusively at the AHL level, playing a prominent role with the Ontario Reign, leading the team in goals, assists and points. Beyond the statistics though, Kaliyev grew his game.

“I thought it was really helpful, to get used to the pro pace and the physicality,” he said. “I thought that I really took a step forward last year playing in the AHL.”

The focus now for Kaliyev is on contributing in different areas of the ice, allowing his offensive abilities to shine in the process.

The importance of being a factor in all facets of the game only increases as players move up through the levels. From the OHL to the AHL to the NHL, those requirements become more and more important, something that Kaliyev fully understands.

“Playing a 200-foot game, not just trying to score on every shift,” he said. “Playing great in the d-zone, playing within the coach’s system and of course contributing offensively, scoring and making plays.”

Everyone knows about Kaliyev’s ability to produce offensively, but would things like the pace and physicality of the professional game, the board battles, the defensive responsibilities be too much as the quality of opposition improved?

Sometimes, with an elite player at the OHL level, those other areas of the game weren’t as important, considering abilities to produce at such a high level offensively. That’s not unique to Kaliyev, but it’s something you do tend to see when players adjust from major junior hockey to professional hockey.

“Arthur, and others, have come a long way in those areas already and certainly his time in the American League helped him, we saw it with Quinton as well,” McLellan said. “From last year when we started, they’ve grown a lot since then.”

That being said though, McLellan and his staff want to put Kaliyev in a position to be successful at the NHL level, which is where his placement becomes such an interesting question. To truly unlock Kaliyev’s gifts, you want to see him as a Top-9 player, and eventually a Top-6 player, but those options don’t always present themselves in the here and now.

Kaliyev’s profile is based around creating offense, specifically through scoring goals, to make the most of his tools. Traditionally, that is best served in an expanded role. To make the most of Kaliyev’s abilities, he will need to be put in the right position to use them. 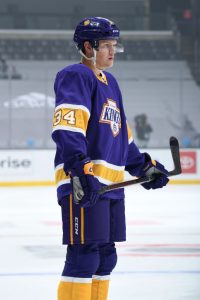 “His skillset, today, tomorrow and moving forward should be in the Top-9, and it should be Top-6 eventually, but it may need to be bottom-three, if you want to call it that, for a little while, as he gets used to the pace here and other guys get sorted out,” McLellan said of his young forward. “Some guys will keep their jobs and positions, other guys might give them up, and maybe Arty will take one of those eventually.”

Kaliyev played on the team’s fourth line in the preseason finale on Saturday but was moved up onto a line with Gabe Vilardi and Vladimir Tkachev during the game, and in practice yesterday, after an injury to forward Lias Andersson.

Vilardi and Tkachev are high-level playmakers, with an ability to pass the puck and set up shooters like Kaliyev for success. On paper, the match makes sense, but having a player like Andersson in that spot also makes sense, as he has shown success in that role. Andersson offers a tenacious, gritty element, combined with his skill, and has chemistry with Vilardi dating back to last season.

As mentioned earlier, though, one man’s injury is another man’s opportunity, and in the moment, Kaliyev could have the opportunity to skate on that line if Andersson isn’t able to go on Thursday.

“Arty, if he stays in the National Hockey League, which I believe he can, he has to play in situations where we can try and take advantage of his strengths, and that’s putting him in a position to score,” McLellan said. “His shot, the offensive part of the game. His defensive game, he’ll have to continue to work on, like anybody else, but he’ll need a certain amount of minutes with a certain type of player to be effective, especially early. We’re also trying to show him some confidence.”

Regardless of his placement in the lineup, Kaliyev is working on rounding out his overall game, and doing the things that will help to make him successful at the NHL level. At the same time though, letting his strengths shine through is important, and that means putting him in a position to produce offensively.

Sometimes, you have a player who is pushing to contribute, but the big club isn’t able to offer him the role he ideally needs to be successful. Sometimes, a spot is available, but inserting a highly-touted prospect would be rushing his development. Last season for Kaliyev, there may have been a bit of both at stake, which is why spending the season with Ontario was the best for all involved.

The timing seems to have aligned here for Kaliyev this season, at least to start things off. He has earned his place in the opening-night 23 and is now working to earn his spot in the opening-night 20. As the Kings continue to evolve and get better, it’s exciting to see young players like Kaliyev push for their opportunities in the lineup.

So exciting that we might just throw an Arty Party on Thursday to commemorate the occasion.

By Zach Dooley
379 Comments
Behind the Scenes

By Zach Dooley
420 Comments
Behind the Scenes