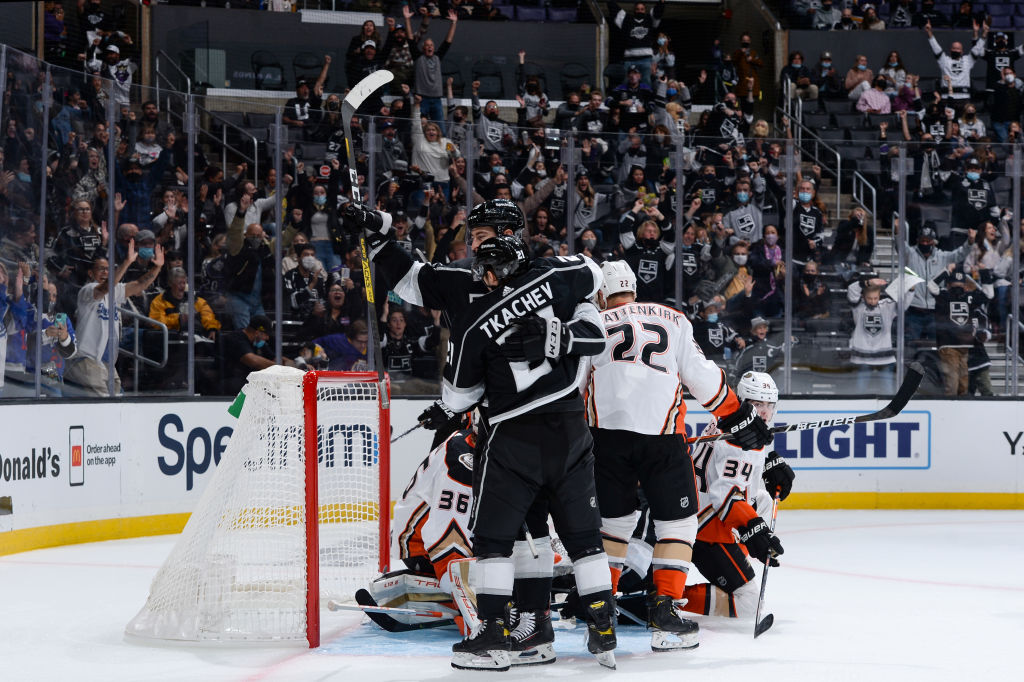 The end of getting excited about guys playing in roles they won’t have during the regular season, the end of overlooking mistakes by saying “it’s just preseason” and the end of thinking about how things might look when the games start to count.

The thinking period is over, and it’s time to go.

The Kings finished the preseason at 3-3-1, with last night’s shootout defeat against Anaheim not sliding the team on either side of the .500 mark. That record now resets to 0-0-0, with Thursday’s game against the Vegas Golden Knights being the first one that really counts.

Preseason storylines, both good and bad, are interesting. I was talking with Jesse Cohen in the press box last night and posed the question of a podcast that touched on a “fact or fiction” narrative on preseason storylines, meaning are things that you could call trends during the preseason things that we should be putting any stock into as the team heads into the regular season. There’s no real way of knowing, but there are certainly some interesting ones, both good and bad, that you would ask the questions of if this was a stretch of seven regular-season games.

On the positive side, the duo of Gabe Vilardi and Vladimir Tkachev combined for nine points from 12 games. As the team slots players into their likely spots in the lineup, is 0.75 points-per-game, or something close, reasonable for players realistically expected to skate onto the third line? If not, what would exciting production look like for those players, in the role they are likely to have?

What about Arthur Kaliyev, tallying four goals from four games, or bottom-six forwards such as Lias Andersson, Brendan Lemieux and Austin Wagner each tallying twice from four games? Obviously we’re not expecting to see 40-goal pace, but can we depend on some sort of offensive production from the bottom end of the forward group? What about the system? We saw the Kings play more aggressively on the forecheck, but when the downside is giving up goals in a meaningful setting, and the risk is higher, will they continue to embrace that mindset?

On the other end of the spectrum, however, sits the team’s slow starts to games – which were an issue last season. Is that an issue heading into the first game? The Kings looked disjointed early last night and with less-than-full groups, we saw slow starts in San Jose and Anaheim as well.

Looking at the top line, the trio of Viktor Arvidsson – Anze Kopitar – Dustin Brown played three games together and combined for no points and a -16 rating. Are we concerned at all with that unit heading into meaningful games?

Of all of those storylines, the final one is the biggest non-factor for me, meaning the production of the top line. I think that from watching the games, the chances created from that unit were there aplenty. Amongst Kings forwards, the three members of that line ranked first, third and fourth in shot attempts for during the preseason, and they only played three games apiece. They also ranked in the top four in scoring chances and high-danger chances for. As they begin to gel as a unit, you have to expect that pucks will start to drop for players of that caliber.

The interesting thought I had with regards to the makeup of the top six is comparing the short-term growing pains versus long-term potential of playing Arvidsson on the top unit as opposed to Alex Iafallo. In the short term, there is existing chemistry between Iafallo and Kopitar/Brown, but when you add a player like Arvidsson to your roster, a two-time 30-goal scorer who has obvious offensive instincts, with terrific positioning and hockey sense, you want to play him with your number one center. The long-term success of that line could be great, but in the interim, it’s taking a bit of time to see the end product with that line. Todd McLellan noted last night that it’s something to be expected at this stage.

“I think that, again, with the timing and the rhythm, we gave a group of players, Iafallo, Brown and Kopitar that have played together for a long time and they’re not together anymore, which is okay,” McLellan said yesterday. “It takes a little while for a new player to fit in and get accustomed to what may or may not happen on the ice. Then, Alex goes down and plays with Danault and Kempe and that’s a whole new line, it will take a little bit of time.”

The other side of the coin is the second line, featuring Iafallo, Phillip Danault and Adrian Kempe. Three 200-foot players, who have the potential to be a possession monster if they gel together. I thought that line was the team’s best in the first period yesterday when the Kings were a bit disjointed overall. All three have two-way attributes, who you’re comfortable with having on the ice in all situations. It’s not the sexy line that many would like to see, but it has all the makings of a very effective line.

Because of the underlying factors, and knowing that preseason for veteran players is as much about getting up to speed as anything else, I don’t think that not seeing either of those lines light the preseason on fire is a cause for concern at this stage. The universal negative though has to be the injuries, which have seen four players you would expect to be a part of the Kings opening group of 23 labeled as question marks four days out.

On top of existing injuries to Andreas Athanasiou, Olli Maatta and Quinton Byfield, forward Lias Andersson left last night’s game with a lower-body injury. With no practice today, we likely won’t have a formal update on Andersson until tomorrow. Byfield will not start the season on the roster, while Athanasiou has yet to rejoin the full group and his availability for game one is also a large question mark right now. Injuries are a part of the game, but the biggest thing you want to take away from the exhibition season is a clean bill of health, and unfortunately for the Kings that was not the case.

Heading into tomorrow, the Kings have a couple of moves to make to get down to the allowable roster size of 23. Rosters are due to be submitted to the NHL at 2 PM Pacific time tomorrow, which is three hours after the Kings are scheduled to skate. From that point on, we’ll see how the Kings can expect to look come Thursday night.

Enjoy your Sunday, Insiders, and we’ll be talking a lot over the next few days!