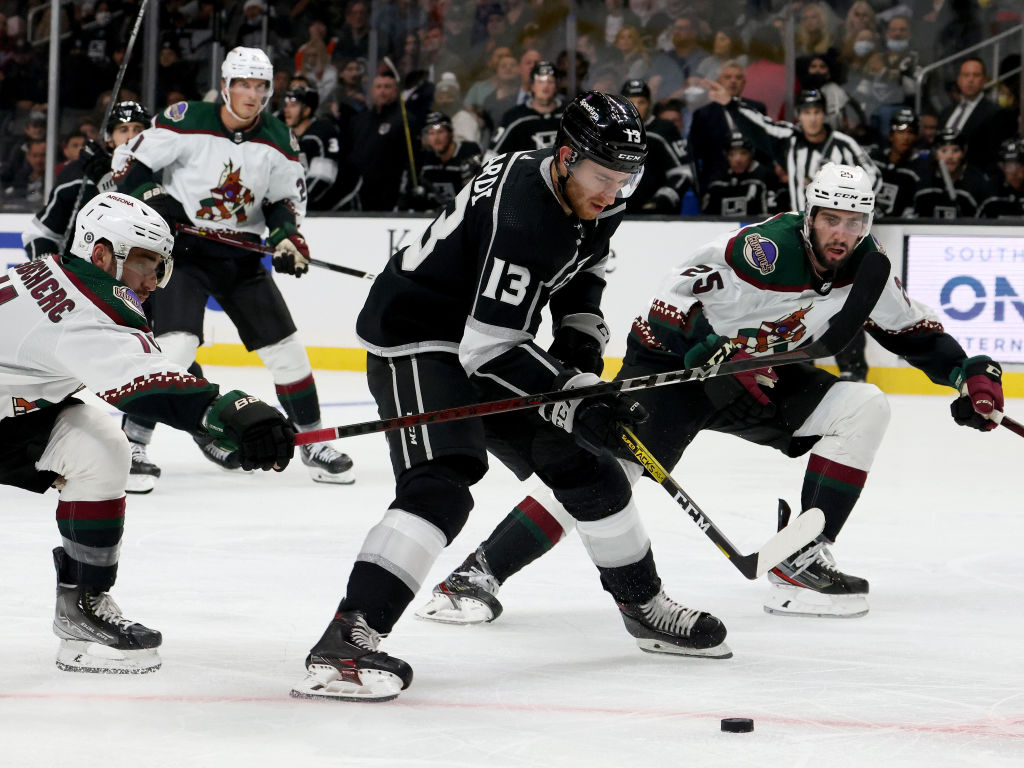 The LA Kings outchanced, and outshot, the Arizona Coyotes on Tuesday evening at STAPLES Center, but the scoreboard read 4-1 Arizona at the end of the night. Gabe Vilardi scored the lone goal for the hosts, a power-play tally, with the Kings on home ice for the first time during the preseason.

It was the Kings that opened the scoring just a few minutes into the game, as Vilardi converted on the game’s first power play. With the second unit on the ice, the puck found Vilardi in a familiar location, in the right-hand circle, and the Kingston, ONT native fired a wrist shot inside the far post and in.

Throughout the latter stages of the opening period, and the middle stanza, the Kings generated sustained offensive zone time and several quality opportunities, but came up empty handed. The Kings hit, by my estimation, five posts in the opening 40 minutes.

The Coyotes tied the game at one, through an admittedly fortunate bounce, as the puck ricochetted off of the end boards, into the crease, and onto the stick of forward Lawson Crouse, who slotted it home for his first of the night.

Crouse later gave Arizona the advantage early in the second period, with a power-play goal, after he crashed the net and put home a rebound off of a point shot from Soderstrom. Arizona went on to ice the game through defenseman Connor Timmins, who hit the empty net inside a minute to play.

Forward Quinton Byfield left the game early in the third period with a lower-body injury. Todd McLellan’s update on Byfield is provided below in the post-game quotes, along with his remarks from after the game, along with those of Phillip Danault and Gabriel Vilardi.

On the team’s success in the faceoff circle tonight
Yeah, absolutely, draws are huge. The puck possession, you’re gaining 10, 15 seconds right away with the puck, so it’s definitely huge. We’ve just got to bury [chances] at the end.

On playing his second game with the Kings tonight
Yeah, it feels good. Obviously, we’re trying to get back to the game, get our mojo going and as a team, everyone is [working on] the systems. It’s definitely good to be a part of these [exhibition] games, play some games, get more comfortable as we go. I definitely felt more comfortable than last game.

On playing in a game with Kopitar tonight, and if he ever finds himself watching Kopitar play out there
Yeah, I love it. He’s awesome. He’s very strong on draws, making the smart plays. Kopi was always a player that I hated playing against, and now we’re together, which is awesome. I can’t wait to get started for real.

Todd McLellan
On an update on Quinton Byfield
He’ll get evaluated tomorrow, that’s the simple answer right now. They’ve looked at it, he’s obviously got a lower-body injury and I don’t know to what extent.

[McLellan added that he had no issue with the hit, it was just “unfortunate” how and where on the ice Byfield went into the boards]

On his general thoughts on tonight’s game
The score obviously has to be different, that’s the simple answer. We did a lot of things well tonight, but we didn’t get rewarded offensively for it, so we have to look at why we couldn’t finish on some of our opportunities. As the game wore on, we forgot about some of our responsibilities defensively, so we’ve got to tighten up at one end and polish at the other. You have to have that killer instinct, and we could’ve had it, should’ve had it, earlier in the game, I think it would have helped us. At the end of the night, we couldn’t get anything past a goaltender that played well. I’m not sure how effective we were on getting through his eyes, getting in and around the net. There were a lot of clean chances, but not a lot of dirty ones.

On the second power-play unit
Yeah, I thought they were effective. They played downhill a lot, the puck went to the net, they retrieved it and got pucks back. Much better looking than it was last year at this time. First unit will get a little polish, everyone’s still trying to find their way with new players. I think sometimes, when you put new players in, you sometimes overhelp them, you’re looking for them when you don’t need to be looking for them, and don’t just take the play that’s there. I think, at times, we tried to find Danault, we tried to find Arvidsson, when maybe the more direct play was making a play to the net. Again, we’ll look at it and we’ll fix things as we go.

On Viktor Arvidsson’s shoot-first mentality, and the Kings not having a player like that in the past
No we don’t, and it’s new for us. You could see it with a couple of those shovel and shoot opportunities that Kopi created, and I think they’ll eventually go in, I’d like to think. He’s not afraid to shoot the puck, he wants it, he commands it and when it’s on his tape, that’s the first thing he looks for and then he’s looking to make a play after that. At times, we need more of that from other guys.

On the confidence Gabe Vilardi played with, and the benefits he might see from playing as the 3C, as opposed to the 2C
That’s fair, yeah, I would say that’s accurate. He’s had a very good training camp, I thought in the games he’s been involved in, he’s created chances for himself and for others, wasn’t a liability defensively, he’s played a calm game. He’s still got some work to do in the faceoff circle, he’s still a young player and he’ll figure that part out, but for the most part, he’s had a pretty good training camp.

The Kings are scheduled to face off against the Anaheim Ducks tomorrow evening at 7 PM from Honda Center. The game will be televised on Bally Sports West, though it will be an Anaheim feed.