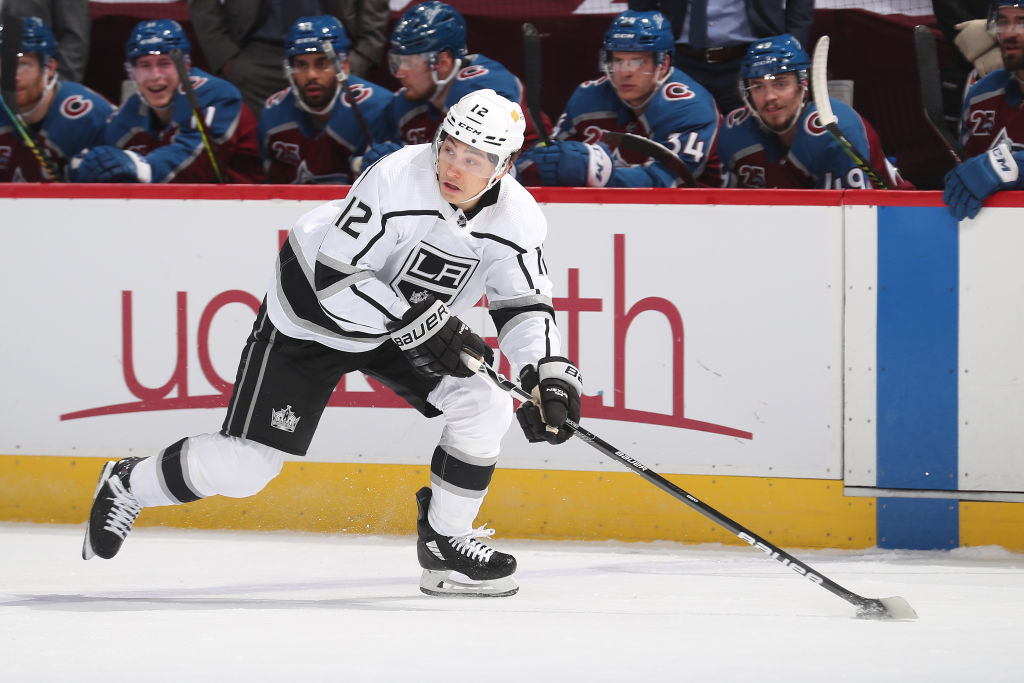 The LA Kings are set for an attendance bump this season.

I’m not privy to the number of season tickets sold, or the interest in luxury suites, but General Manager Rob Blake might’ve had an X-Factor in his back pocket. Thousand Oaks native Trevor Moore.

“It might’ve been a smart move for the Kings, financially,” Moore joked. “I’m going to have a lot of people there, we’ll have a big group for sure.”

All joking aside though, the Kings locked up one of the standout performers from their 2020-21 campaign in Moore, who elevated his play during his first season with the organization, cementing his role as a hard-working, middle-six forward, who provides energy at even strength and effective penalty killing while a man down.

Moore took the next steps to be a part of something exciting in Southern California, as the former restricted free agent inked a two-year contract extension to keep him in the organization at a cap hit of just under $2 million per season.

For a native of the area, and someone who grew up going to Kings games at STAPLES Center, signing specifically with this team is a dream come true for Moore.

“I was with my family this weekend, as everything was getting done, and they kept saying ‘did you even imagine signing a contract with the Kings?’ and honestly, my whole life, no I couldn’t,” he said. “I’m super happy to be here and I’m grateful. I’m just looking forward to the future.”

It’s the future that’s exciting for many when talking about the Kings, with the NHL’s best prospect pool by many estimations currently possessed by the organization. While in some ways, the future is still a bit down the road, in others, the future is now. 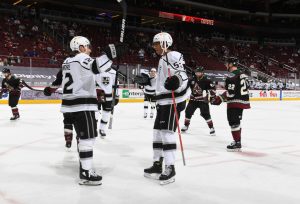 GLENDALE, ARIZONA – MAY 03: Trevor Moore #12 of the Los Angeles Kings is congratulated by Quinton Byfield #55 of the Kings after scoring a goal against the Arizona Coyotes during the first period of the NHL hockey game at Gila River Arena on May 03, 2021 in Glendale, Arizona. (Photo by Norm Hall/NHLI via Getty Images)

Players such as Moore, unknowns in terms of their role in some ways entering last season, emerged as younger veterans during an up and down 2020-21 season. Having those players in place is important, as the organization works to bring through the next wave of talent, beginning with one player who Moore skated alongside for a short cameo in Quinton Byfield.

“Just playing on a line with Quinton Byfield for a couple of games is fun, you can see the talent that he has,” Moore said. “I’m working out with Turcotte right now, just those young guys and the talent they have, is incredible. You look at the moves we made in the offseason, bringing in Arvidsson, super good player. It just seems like a place that’s going in the right direction and I’m just grateful to be a part of it.”

In the present, Moore was a pleasant surprise for many externally, though he always felt he could contribute to the extent that he did this past season.

The shifty forward collected 10 goals and 23 points last season, as he worked his way from the fourth line on opening night to a regular role in the middle six throughout the majority of the season. Moore showed that he can assume just about any role, on any line. When asked to be an energy player, on a line with Jaret Anderson-Dolan and Carl Grundstrom, he succeeded. When asked to play on the team’s second line, alongside Gabriel Vilardi, he succeeded.

That’s one of the perks to Trevor Moore. Anything, anywhere, anytime, he’s ready to roll.

As he saw his professional career develop in the Toronto Maple Leafs organization, Moore quickly realized he’d been to adjust himself and his style to progress. He was a scorer at the collegiate level, an All American at the University of Denver, better than a point-per-game player in his final two seasons with the Pioneers.

When he reached the AHL, with the Toronto Marlies, he saw opportunities for himself in other ways. While knowing he still had his skill, he also understood that he might need to contribute in other ways in order to be an NHL player. It was with AHL-Toronto that he got the chance to kill penalties, a skill that’s never left, and made him an important player for last season’s Kings.

“I think you have to say hey, do I want to play in the NHL or do I want to be a good power-play guy in the AHL?,” Moore said. “But it’s been fun too. I love learning new positions, I never played on the penalty kill before, but I got the opportunity in the minors and I thought this could be something I’m good at, this could be something where I’m useful moving up. I’ve seen some guys come through the Marlies, Connor Brown and Zach Hyman, they were the same thing. They kind of changed their games, they were offensive guys and they went more penalty kill and now you look at them and they’re able to do the offensive stuff again. I think that just getting your foot in the door is super important and it’s something that guys in the minors should take a look at, I think.”

Moore ranked third in shorthanded time on ice per game last season amongst Kings forward, skating more on the penalty kill than everyone besides the top tandem of Anze Kopitar and Alex Iafallo. Moore’s energy and shorthanded prowess were a big part of the Kings’ highly-ranked PK unit, and his two shorthanded goals led all Los Angeles skaters, as one of 23 players across the NHL with multiple-shorthanded tallies.

The offensive ability was still there, as Moore netted double-digit goals in a shorthanded season, but he was also able to channel his tools into other roles, ones that were important on the Kings roster. 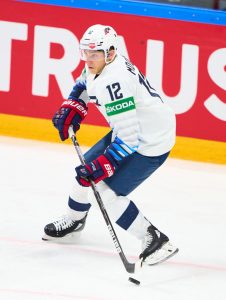 RIGA, LATVIA – MAY 27: Trevor Moore #12 of the United States in action during the 2021 IIHF Ice Hockey World Championship group stage game between United States and Latvia at Arena Riga on May 27, 2021 in Riga, Latvia. (Photo by EyesWideOpen/Getty Images)

The 26-year-old winger also showcased that offensive ability on the international stage, as he represented Team USA for the first time in his career at the 2021 IIHF World Championships. Playing center for the first time in his career, Moore was the pivot on the top forward line for the Americans, as he tallied nine points (5-4-9), helping his squad earn bronze medal. Moore was tied for sixth in the tournament in both goals and total points, the cherry on top of a great trip to Latvia.

“It was awesome,” he said. “We had a super fun group and we got super close as the time went on. Playing for Team USA, anytime you can, you kind of have to do it. For myself, I had never played center before, I showed up there and all of a sudden I was playing center, so I tried to act like I knew what I was doing, tried to learn some faceoffs from some of the guys. It was fun.”

Turning the focus back to the Kings, Rob Blake called Moore an important part of the culture that the Kings are trying to build.

“We feel that he’s an important part in our lineup, but also in the leadership and the type of culture,” Blake said. “You can see him adapt and very much become a prominent figure in that aspect as the year went on last year.”

Moore attributed much of that culture to Anze Kopitar, as a captain and as a leader.

“I think anytime you have Kopi as your captain, it’s going to be a team that has good leadership and has a good set of rules,” he said. “It’s a good culture here. It’s guys who want to win and guys who want to get better every day. That’s somewhere I want to be.”

And now, it’s somewhere he is for at least the next two seasons. The hometown kid, on the hometown team.

Moore’s focus now shifts to a different type of long-term commitment – The winger is slated to get married this weekend.

“Super exciting, we’re looking forward to that, that’s the big focus right now,” he said. “Putting the finishing touches on stuff, trying to help out my fiancé, she’s been great, so she’s doing most of it so I’m just trying to help out there.”

“Just back to work, going to keep grinding.”

When it comes to Trevor Moore, we’d expect nothing less.