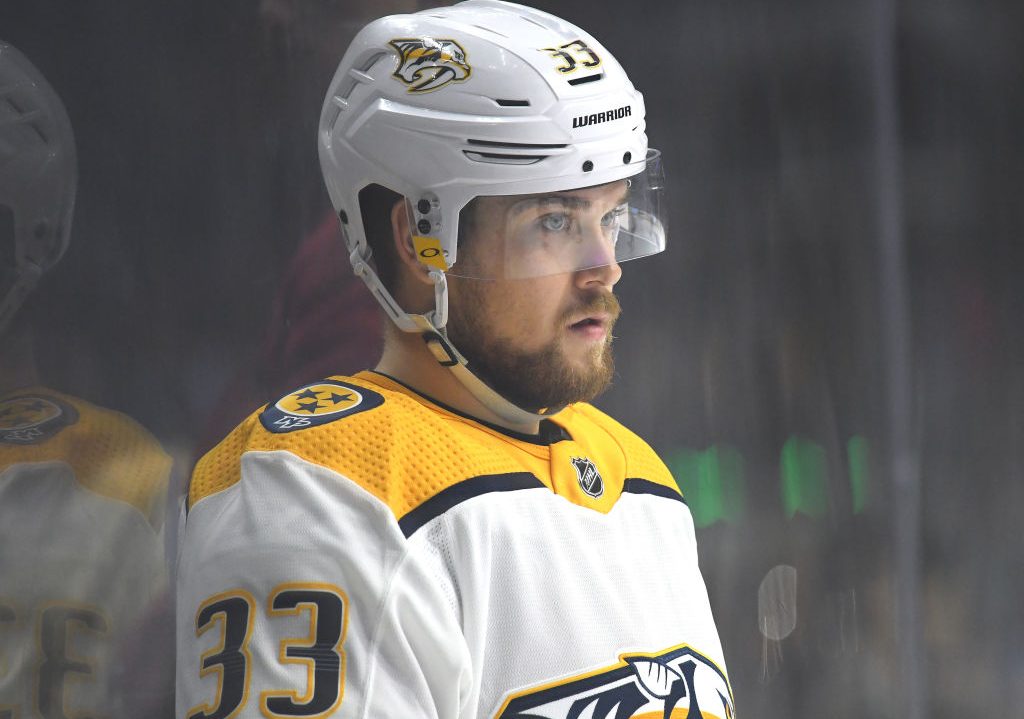 Last week, the LA Kings made the first move in what could shape up as an offseason of interest, by adding forward Viktor Arvidsson from the Nashville Predators.

Arvidsson was an important add for the Kings, who ranked fifth from the bottom of the NHL in terms of goals scored. Arvidsson is a two-time 30-goal scorer, including a career-high of 34 in 2019. Adding a goalscorer to a team in need of goals? Sounds like a great match. Don’t sell Arvidsson’s game short though. In his own words, he believes he’s much more than just a goalscorer.

“Of course I love to score goals, but I also feel like I have a lot more in my repertoire than just goalscoring,” Arvidsson said, on a conference call earlier today. “I can play in any situation, I take pride in playing in all situations, 4-on-5, 6-on-5, whatever it is, I take pride in it and I’ll do my best in every situation. I think, just because I scored 30 goals, I don’t think that’s just how you should look at me. You should look at me as an all-situations player, who can contribute in any way.”

Viewing himself as an all-around player doesn’t diminish his shooting and scoring abilities, however.

In his last three full seasons, Arvidsson scored 29 or more goals in each campaign, ranking inside the NHL’s Top 20 leaguewide from 2016-19, with his 74 even-strength goals ranking ninth. Arvidsson spoke to his shooting mentality earlier today, which saw him ranked similarly in that timespan in shots on goal, as well as shot attempts. 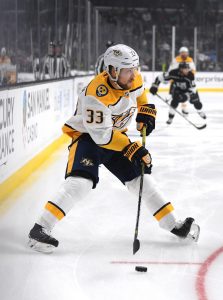 LOS ANGELES, CALIFORNIA – MARCH 14: Viktor Arvidsson #33 of the Nashville Predators cuts to the net during a 3-1 win over the Los Angeles Kings at Staples Center on March 14, 2019 in Los Angeles, California. (Photo by Harry How/Getty Images)

“I think I’ve always had it,” Arvidsson said of his shooting mentality. “I love to score goals, and if you don’t shoot, you’re not going to score and every time you don’t shoot, you can’t score. That’s kind of been my mentality throughout my career. I came to Nashville with Peter Laviolette, and it was a lot of shooting that really fit my game. I broke through and from there, I’ve been a shot first [player] and I challenge people with my skating.”

Looking at his 2019-20 and 2020-21 campaigns, by comparison, might leave you wanting a bit more when compared to his dynamic three-season run beforehand. The underlying stats from this past season, however, show a player who was actively involved in creating opportunities, even if they didn’t always wind up in the back of the net.

“I still feel like I had a good season, if you look at how many scoring chances I created and how much I was involved in scoring chances for the team,” he noted. “I’m looking forward to coming to LA and showing what I can do.”

After learning of the trade, Arvidsson said he first thought of his teammates with the Predators, the friendships he’d made. After the initial, and natural, emotion, his focus turned to excitement of joining an up and coming organization in the Kings, with a mix of younger players and established veterans ready to take the next step forward.

“My first reaction was my teammates that I had been with for seven years,” he said. “I was thinking about them and how much fun I had with them. After a while, I looked to what I’m coming to and I’m really excited. I feel like it’s a great opportunity for me and the team, we have something really up and coming, with young players and older players who really want to win and are hungry to win. I’m really, really excited to be a part of it.”

The Skelleftea, Sweden native said that he’s spoken with Rob Blake and Todd McLellan, but just at an initial stage thus far. He said they haven’t necessarily discussed potential roles or expectations at this stage, but that doesn’t mean he hasn’t thought about, or talked with, any of his new teammates. 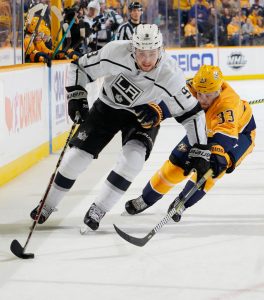 NASHVILLE, TN – FEBRUARY 21: Adrian Kempe #9 of the Los Angeles Kings skates against Viktor Arvidsson #33 of the Nashville Predators at Bridgestone Arena on February 21, 2019 in Nashville, Tennessee. (Photo by John Russell/NHLI via Getty Images)

Arvidsson was a teammate of Adrian Kempe at the 2018 IIHF World Championships, representing Team Sweden. Arvidsson said he texted with Kempe the day after the trade, and he’s looking forward to continuing to build their relationship, now teammates for both club and country. He also added that he knows Carl Grundstrom a bit as well, with their hometowns back in Sweden being close to each other.

When asked about the prospect of playing alongside Anze Kopitar this season, Arvidsson echoed his thoughts regarding talking to Blake and McLellan, noting that he still doesn’t know exactly who he’ll be playing with, or in what capacity. That didn’t stop him from praising his new captain, however.

“He’s obviously an unbelievable player and a great leader, from what I’ve heard. It’s going to be fun to be a part of a team where he is.”

Regardless of what line he features on, his role on the power play and penalty kill, or his potential linemates, the Kings are getting a versatile, talented forward in Arvidsson. And versatility is a universally good thing.

He confirmed that he is equally comfortable on both the left and right sides, giving the Kings added flexibility when building out, or better put at this point, envisioning, what a potential 2021-22 lineup could look like.

“I can play either side, I played a lot on the right side in Nashville, because of the system, it was a lot of skating on the right side,” he said. “I like being a part of the skating game, but I can play both. I started on the left when I came to the United States, and moved over to the right because I felt like I was more involved in the game.

Arvidsson also assured that the Kings are getting a healthy player, after injuries slowed down his last two campaigns.

Although in a traditional sense, no one in the NHL played full seasons in either 2019-20 or 2020-21, Arvidsson was nagged by a couple of injuries, that cost him six games in this past regular season, as well as four of six postseason games, not to mention the handful he missed during the season prior. With those woes hopefully now in the past, Arvidsson feels like he’s on the path back to a clean bill of health.

As we now stand approximately two months from the start of training camp, Arvidsson is the first piece put into place, during a complex offseason puzzle for the Kings. Adding scoring, particularly at even strength, was a natural objective for the team exiting the 2021 campaign and bringing Arvidsson on board with three years remaining on his contract helps with that ambition.