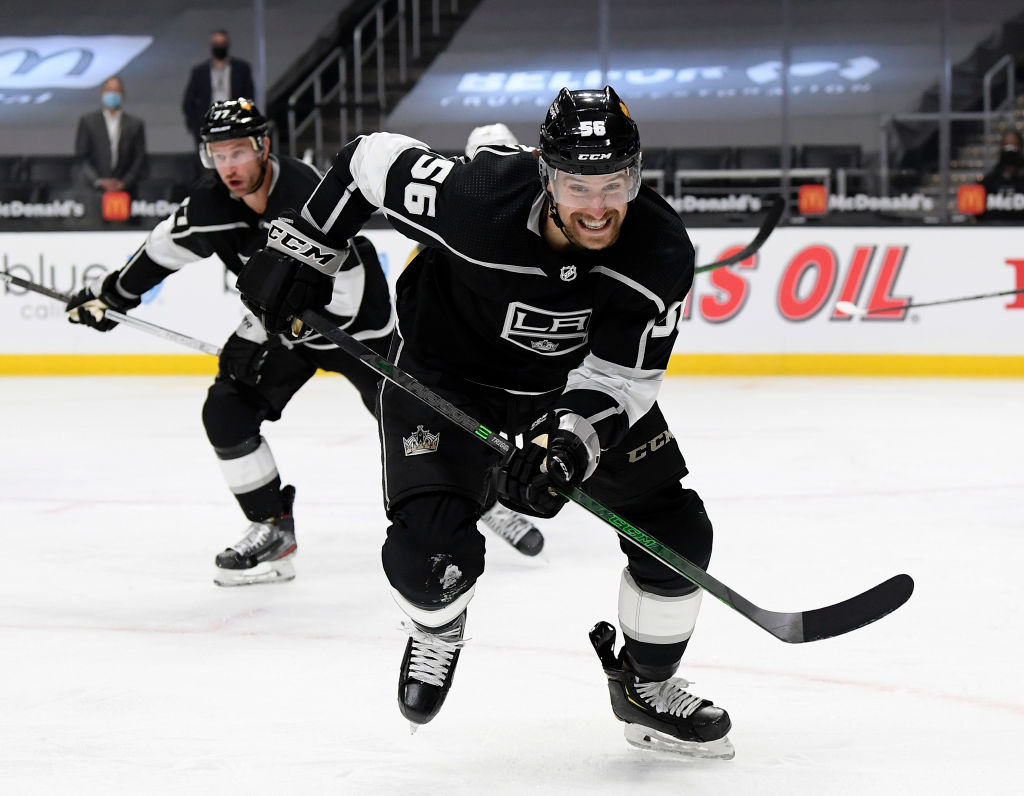 We conclude our foray down the left side of the Kings blueline with a look at Kurtis MacDermid, the team’s seventh defenseman by games played.

Though initially slotted in to start the season as a regular, MacDermid missed opening night while on the NHL’s COVID 19 protocol list, before he eventually returned to the lineup for a steady set of games. With the emergence of others on the Kings blueline, mainly Tobias Bjornfot, MacDermid wasn’t a regular for the Kings for the majority of the season, as he appeared in exactly half of the team’s games throughout the course of the season in full.

With MacDermid’s review, the look back at each of the seven regular defenseman has been completed, with forwards to follow over the next few weeks.

MacDermid began the season as the team’s sixth defenseman, expected to spend much of his time skating on a defensive pairing with Sean Walker. The mobile Walker and the physical MacDermid formed a relatively successful pairing – controlling over 50 percent of shot attempts together – throughout the 2019-20 season, though the injuries and absences on the Kings blueline led to less stability on the backend throughout the course of the truncated 2021 campaign.

Trending Up – There is an obvious respect of MacDermid from the coaching staff and management group with the Kings.

MacDermid brings certain qualities to the organization that are valued, and additional ones that are lacked across the board by the Kings. Waves of character and toughness for a player who knows and accepts his role have been seen as a good combination to have within the organization.

“Dermy has a specific role to play,” Todd McLellan explained. “He’s physical, he’s got to be positional. Granted, we don’t look for a lot of offense from him, but he does have a good shot, he’s been able to use it a few times, but the majority of it will come from defending and being positionally sound, understanding his range and how to use it. Whether he comes back into the lineup, or he plays every day, that’s part of his recipe, and he’s got to follow that on a nightly basis. For the most part, he does.”

MacDermid in some ways fills the role of the “modern enforcer”. Gone are the days of having a player whose primary purpose on the team is to fight, playing five minutes a night and matching that total in penalty minutes. Fighting is still a part of the game – certainly it’s a part of MacDermid’s – but without an ability to do and bring other things, players won’t find an NHL role.

As a depth defenseman for the Kings, McLellan feels that MacDermid filled that role. He brings the fighting element, he obviously has the toughness element, but it’s about more than that.

“Dermy is here for a lot more things than the fighting. He’s a physical player in the corners, he penalty kills well, he blocks shots. He breaks plays up, he’s a great teammate, keeps teammates honest, keeps them safe, I could go on and on. There’s times when he may not be making the prettiest play, but I can’t tell you how much he means to our group over and above the fighting.”

I don’t think that anyone is looking at MacDermid to be the guy driving offense from the backend, as McLellan indicated, but his creation rates were pretty solid, ranking similarly to Drew Doughty in terms of shot attempts for and third amongst Kings regulars on the backend in terms of scoring-chances for, both on a per/60 basis. For much of the season, MacDermid was the only defenseman other than Doughty to have a goal, until late season production ticked up for players like Sean Walker and Matt Roy.

Trending Down – Throughout the 2019-20 season, the pairing of Walker/MacDermid was above the 50% mark in Corsi. Same can be said for the pairing of Roy/MacDermid. This season, both pairings dropped well below the halfway line, with both sitting closer to 40 percent than 50.

The differences came mostly from chances allowed. MacDermid’s allowed column, in terms of shot attempts, scoring chances and high-danger chances ranked among the highest on the Kings relative to his teammates. In terms of suppressing opportunities, it just wasn’t there consistently, leading to inflated figures.

Other metrics were mixed – MacDermid’s pairings with Walker or Kale Clague gave up the highest rate of goals against, amongst regular defensive pairings, but MacDermid paired with Matt Roy had the best GA mark among any duo.

2021-22 Status – MacDermid enters the final year of his two-year contract extension, which he signed in April 2020. MacDermid extended his contract off of a strong finish to the 2018-19 season, and a solid 2019-20 campaign, and currently slots in as a depth option on the left side.

At a modest cap hit, MacDermid won’t cause much harm for the Kings concerning the salary cap. How exactly he slots in moving forward, with all seven regulars from last season still under contract, will play out as the Kings head into training camp.