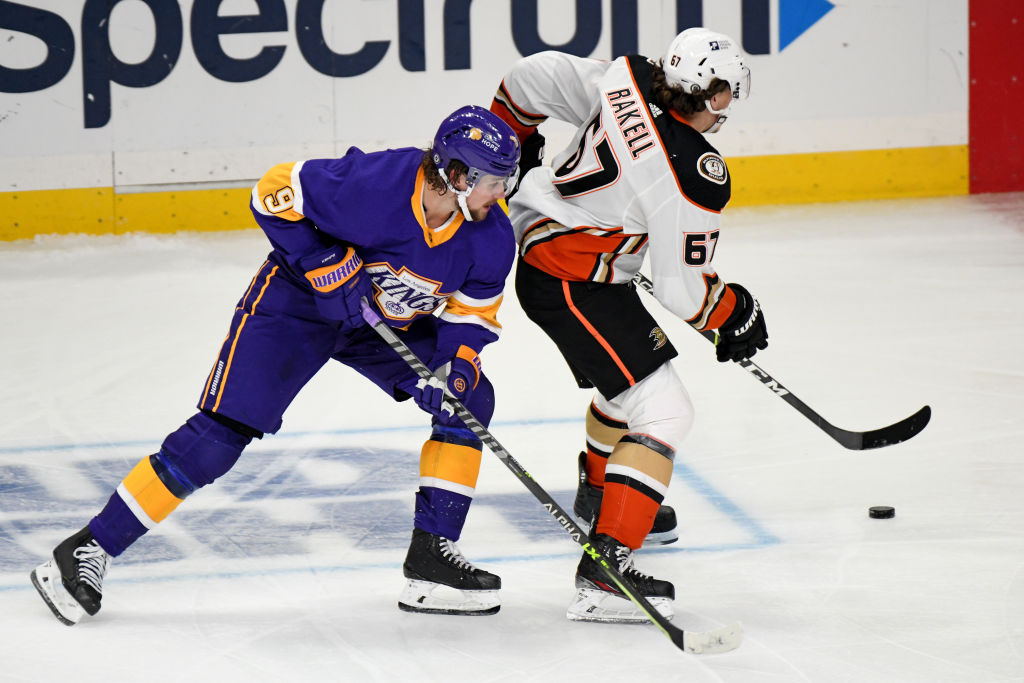 Following last night’s win over Anaheim, the Kings were back on the ice this morning for a full-team practice at Toyota Sports Performance Center.

Here’s how the Kings lined up this morning, by jersey color –

Certainly some interesting combinations here, showing Quinton Byfield up with the “top six” group, and some adjustments as well within the bottom six group. With the top line unaltered on most nights, that would slot him between Adrian Kempe and Trevor Moore, with their center from last night, Blake Lizotte, moved to another unit. It’s just practice, and it’s not gameday yet, so we’ll see how the team shakes out tomorrow.

Speaking with Todd McLellan this morning, he said that through the end of the season, we’ll likely see a number of different combinations in the bottom six, with players moving into and out of the lineup for a variety of reasons.

“I think we’re going to be in flux as the season goes on, to tell you the truth, because we will get some other players into the lineup,” he said this morning. “There will be players that will come out, not due to performance – obviously if they’re not playing well they will come out – but we are going to get some other players into the lineup to look at them. It creates that internal competition, it’s something that we want and that we need. If you have that, I think your organization is moving forward. None of it’s charity, everything’s earned, but to say that we have solid lines in the bottom six, I wouldn’t agree with that at this point.”

Such was expected to be the case, with the Kings still controlling three of their four post-deadline recalls, and some younger players in the AHL meriting an opportunity. Lias Andersson and Quinton Byfield were reassigned from the Ontario Reign to the taxi squad yesterday, and the groups above show that they are in the mix here for game action, potentially coming this week.

Included in today’s gray mix was Adrian Kempe, who seems to be on a different line by the hour. Kempe has played 75 or more even-strength minutes with seven different forwards this season, but not over 200 with any one teammate. For contrast, no other teammate has more than five linemates in that range, while Anze Kopitar and Alex Iafallo have played more than 600 even-strength minutes together this season.

It’s safe to say that Kempe has been moved around quite a bit, showcasing both his versatility and his ability to be the alpha on his own line. Yesterday, playing with Lizotte and Moore for the first time since the games at Honda Center back in early-March, Kempe was noticeable. He created several turnovers with his speed, and had nine shot attempts in the win over the Ducks, with his nearly 60% shot attempts for the best mark on the team behind the Kopitar line.

“He’s always been very good with the puck, but his play now, his tenacity and his skating ability is really coming out without the puck,” McLellan said. “Like I said a few nights ago, forechecking is contagious. Lizotte, Moore, Kempe, when they get going, you have no choice but to follow them with that type of tenacity and become an important part in that area.”

“I mean, there’s probably a lot of excitement, him being a second-overall pick,” Dustin Brown said after today’s practice. “It’s his first time getting called up and practicing, short practice today, but I think we all know what he can bring. He seems to be doing very well at the AHL level, so hopefully he gets in a game here and I think there’s just a lot of excitement around him.”

Byfield was recalled to the taxi squad, where he currently stands, and would need to be recalled to the active roster in order to play in a game down the stretch. That, however, seems likely at some point as the Kings wind down their season, with the team appearing to have one of the three remaining recalls slotted for their receny second-overall draft pick.

Byfield spoke with media this morning for the first time as a member of the full group, talking about his time with the Ontario Reign, the biggest differences between junior and pro hockey, the strengths he sees in his own game, as well as the areas he feels he’s seen the most growth from January through now.

Connect Four
Last night marked the beginning of four games in six nights, and four consecutive games between the Kings and Ducks.

From an Anaheim perspective, it was originally supposed to be five consecutive games against LA, though the Kings always had two games scheduled in between, which remained the case. Still, five games out of seven, and four straight creates an interesting type of environment that even the most veteran player on the squad couldn’t recall seeing in the regular season in his career.

“I don’t recall ever doing it, but that’s not to say I haven’t,’ Brown said. “It’s just one of those unique situations that, again with this year, has come up. I think we were supposed to play them five times in a row actually, I think we moved one of the games, but I think it’s fun to play in these types of environments. The back-to-backs, the sets of games we’ve been playing all year, it’s been fun to play a team consecutively, because it’s kind of like a chess match. You learn and adjust, come back the next night and try to figure it out again. We have four games in a row against a team and we need points desperately, so the games are huge.”

A chess match is a good way of putting it, because seeing the same opponent repeatedly provides ample time for adjustments, alterations and improvements off of what happened the game prior.

The Kings won last night, but they didn’t dominate the game, or play their best 60 minutes of the season. Regardless though, they got the victory, and winning without their best stuff can set up perhaps a more dominant effort later on in the week. With three games between the two teams over the next four days, opportunities will be ample.

“It was obviously a good result, but I think there was a lapse, or a dip, in our play in the second period that allowed it to be more of a game than it maybe should have been,” Brown said. “I thought we played really well in the first, and we kind of just sat back, and I don’t think that’s a good way to approach any game, or any team for that matter. Especially, a set of four games like this, it’s almost like a playoff series, you want to break their will each and every game. I think having that type of attitude going into tomorrow night, knowing where we are in the standings and how important these points are, I think it’s important to keep our foot on the gas for the whole game.”

Kings and Ducks, back at it tomorrow. And Friday. And Saturday.