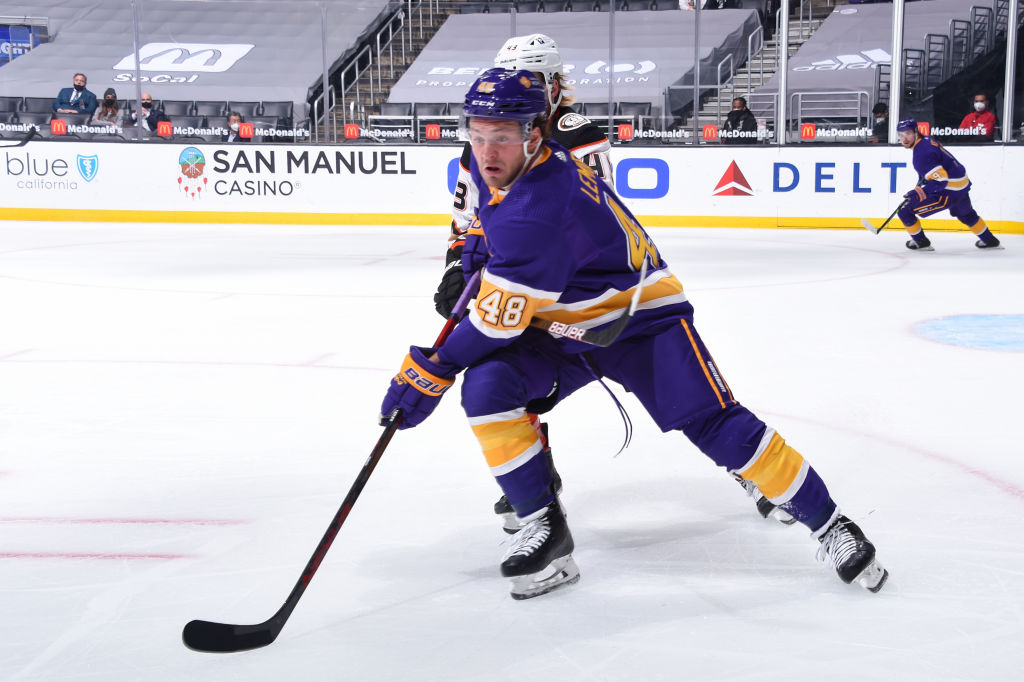 The LA Kings started the first of four consecutive games versus Anaheim on a high note, with a 4-1 victory over the Ducks on home ice.

Unlike the two games over the weekend, it was the Kings that struck first tonight, with a pair of opening-period goals from defensemen. First, Sean Walker’s shot from the right point evaded traffic in front, before deflecting off of goaltender Anthony Stolarz’s glove and in for the game-opening goal. Just past the halfway mark of the first, Mikey Anderson made it 2-0, as he gathered a puck that had ricocheted off the endboards and put his backhanded shot past Stolarz upstairs for his first goal of the season.

The visitors made it 2-1 just over three minutes into the second period, as the run on defensive scoring continued. Stationed at the center point, defenseman Jamie Drysdale collected a feed from Danton Heinen and fired a shot past Jonathan Quick from between the circles to get Anaheim on the board.

After a third period that saw some opportunities at both ends, the Kings put the game away with two late empty-net goals, from forwards Dustin Brown and Trevor Moore, to seal their second consecutive 4-1 victory versus the Ducks. Adrian Kempe collected the lone assist between the two goals, a solid reward for a player who was energetic and active throughout the evening. Kempe and Andreas Athanasiou were the primary beneficiaries of the 11/7 look, with Athanasiou leading all forwards in even-strength ice time tonight.

The Kings will host the Ducks again on Wednesday, followed by back-to-back games in Anaheim on Friday and Saturday.

On reuniting with an old line, and getting back to the success they had before
I think forecheck for sure, that’s where we created most of our chances tonight too. We had some really good looks, I think I missed the net eight times, so that’s on me, but I think those guys, they played great, and we created a lot of chances. Looking forward to keeping doing that, and keep being good on the forecheck.

On getting the added offense from the backend tonight
Our D are key for us, all over the ice, and when they score, it puts a little pressure on the forwards as well and we’ve got to be on our toes. Being in front of the net, so they can shoot it more, and it was nice to see them score tonight. It was nice to get the W as well.

On the points of emphasis as of late to create more offense from the blueline
Obviously, that’s been talked about a lot lately, and it’s a big focus for us. Basically, we just try to create shots, create shooting lanes, just get the puck to the net and hopefully the forwards can either have a good screen or get a tip on it. That’s definitely a point of emphasis for us.

On what the Kings did well defensively, in allowing just one goal
I thought our structure was pretty good, I thought we were breaking the puck out well. Even when they did have some zone time, there was lots of communication and guys were sorting it out, and Quickie made some big saves when he needed to. Some things to work on, but overall pretty good.

On pacing out the defensemen with seven available tonight
Yeah, you’re definitely more fresh with seven guys, but again, you have to be aware with who is going and who you’re playing with. I think, overall, your legs have a little bit more pop in them for sure.

On his offensive game this year, and his desire to create more offensively
Obviously not where I want it to be. That’s something that they expect out of me, so I’ve got to do a better job at getting pucks to the net and creating opportunities in the offensive zone. Starting to get some shots through and stuff, but have to do more of it.

On getting two goals from defensemen tonight, and the instincts shown by his blueliners
The really good teams in the league right now, they’re getting a lot of good production from the blueline. Sometimes, I don’t think our [defensemen] aren’t aggressive enough with their shots, they’re not always prepared to shoot. Tonight, a goal like Walker’s, it’s a seeing-eye one that finds its way to the net and lo and behold it goes in. I think a lot of times, you score off that crap in and around the net, when the D do take the shot. As we move forward and we continue to evolve, offense has to come from the blueline as much as it does from the forwards.

On the 11/7 look tonight, and it providing certain forwards with more ice time
I think, on this night, we were happy that we went that route. It got some of our forwards into the game more than maybe they would have if we just rolled four lines. We felt better playing the fourth line with different people there, for whatever reason. Then, the counter part of it is the backend, now you’ve got a d-man that’s sitting there for a little while. It’s hard, one way or the other, I thought [Trent Yawney] did a real good job of managing the backend tonight, all the d-men were involved. Believe it or not, it’s not an easy task, when you’re used to coaching six and rolling them, Yawns did a real good job. Maybe it’s something we’ll look at doing more often.

On the benefits of seeing different pairs when rolling seven defensemen
Again, Trent Yawney played guys with different partners throughout the night, just to make sure there were some balanced minutes. I think it keeps the D on their toes, it’s not routine, it’s not just jumping over the boards and continuing to do what you do. You have to be a little bit more alert, a little bit more aware of who your partner may be, communicate on the bench. It was just a change, and I think it helped us a little bit tonight. Maybe it’s something we’ll do more moving forward, I don’t know, but tonight it worked for us.

On Anze Kopitar’s success on defensive-zone faceoffs tonight
Well, it makes a huge difference when you at least have a chance to execute a breakout after a faceoff. I was asked a couple of times about Kopi’s minutes, compared to some other centers, he’s the most reliable faceoff guy we have, by a country mile. A lot of times, when you’re in your zone, he comes out on the ice and starts there. That’s a tough task for him, because he’s got to skate 200 feet to get to the offensive zone all the time. When you’re a really good team, you can save that a little bit, use him on offensive zone starts than defensive zone [starts]. Some of our other centers need to pick the slack up, so we trust them a little bit more there.

Notes –
– Tonight’s game marked the first time this season, and the first time overall since February 20, 2020, that the Kings got two goals by defensemen in a single game (Mikey Anderson & Sean Walker).
– Anderson scored his first goal of the season, and the second goal of his NHL career, with his opening-period tally.
– With his assist on Anderson’s goal, forward Andreas Athanasiou collected his 11th career point against the Ducks, his most against any NHL opponent
– With an assist on Walker’s goal, forward Anze Kopitar tallied the 996th point of his NHL career, leaving him four shy of 1,000.
– With an empty-net goal, forward Dustin Brown scored his team-leading 17th goal of the season, as he collected his sixth multi-point (1-1-2) game of the season
– With tonight’s victory, the Kings are 14-4-0 this season when scoring the first goal.

The Kings are scheduled to hold a practice tomorrow at 11 AM at Toyota Sports Performance Center.