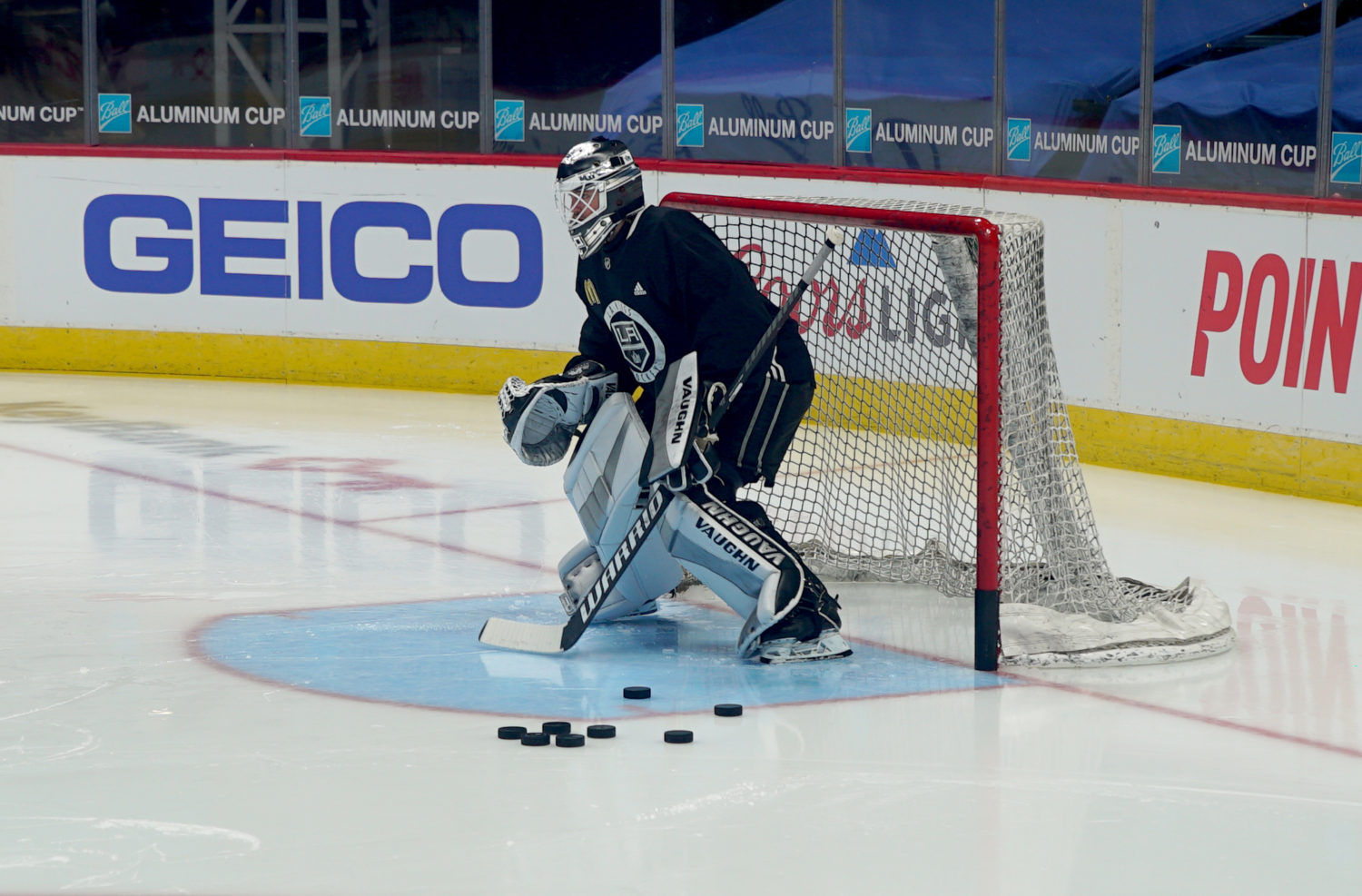 TONIGHT’S MATCHUP: The Kings and Avalanche square off tonight to begin their second two-game set of the season, with the first games in Colorado. The two teams split wins in the first meeting of the season, back in January, with each team winning once at STAPLES Center.

HEAD-TO-HEAD: With two assists in both games, forward Anze Kopitar leads all Kings skaters with four points (0-4-4) in head-to-head play. Kopitar has 51 points (17-34-51) from 49 career games played in his NHL career against Colorado. Forward Adrian Kempe scored in both games, while forward Andreas Athanasiou had two points from two games played. For the Avalanche, forward Nathan MacKinnon has matched Kopitar with four points (1-3-4) from the prior two games, while forward Mikko Raantanen has two goals and three points.

KINGS VITALS: Entering this trip, was there a more pressing question facing the LA Kings right now than who will be the two goaltenders in white jerseys tonight? This morning provided us with a bit of clarity, as the team announced that Cal Petersen had cleared protocol, with the Iowa native joining the team in Colorado and skating this morning.

Todd McLellan said after today’s morning skate that Petersen is back with the group, and is available to play this evening.

Petersen’s availability leads you towards a Petersen/Grosenick tandem tonight, as Jonathan Quick is still considered day-to-day and did not travel with the team. Grosenick earned the victory on Wednesday in Anaheim – Starting his first NHL game since 2014, the Union College graduate made 33 saves on 34 shots, as he earned his first victory with the Kings, 2,306 days after his first career NHL victory with San Jose.

In his NHL career, Petersen is 0-2-0 against Colorado, with a .836 save percentage and a 5.35 goals against average, both inflated by his fifth career NHL start, when he conceded six goals on 31 shots in just over 40 minutes of action back in 2018. Petersen made 21 saves on 24 shots in a 3-2 loss at STAPLES Center in the team’s third game of the 2020-21 season, back in January.

The Kings were all accounted for this morning for an optional skate, minus Drew Doughty, Alex Iafallo and Olli Maatta, who did not skate.

On defense, Tobias Bjornfot is “good to go” today, per McLellan. Bjornfot missed both games in Anaheim this week, though he returned to the group on Wednesday for morning skate and warmups, practiced in full yesterday before the trip to Colorado, and skated this morning. McLellan had originally expected to see him back in the lineup on Wednesday, but it did not come into fruition, as Kurtis MacDermid made his second straight appearances alongside Matt Roy.

Up front, forwards Austin Wagner and Michael Amadio checked in last game, in place of Matt Luff and Rasmus Kupari, with the latter assigned to AHL-Ontario before the trip. Here’s a projection of how the Kings could line up tonight, considering Bjornfot’s involvement, compared to how they lined up in Wednesday’s win over Anaheim.

AVALANCHE VITALS: Goaltender Philipp Grubauer has been one of the NHL’s top goaltenders so far this season, as he ranks amongst the league leaders in wins (13, second), shutouts (3, T-second), goals-against average (2.05, fourth) and goals saved above average (5.26, eighth).

Per Peter Baugh of The Athletic, the Avalanche are expected to line up as they did on Wednesday –

Colorado is currently without four defensemen, including their top gun on the blueline, Cale Makar. Makar, who has not played since February 24, in what has been deemed as an upper-body injury, has 14 points (1-13-14) from 15 games played this season. Defensemen Bowen Byrum, Dennis Gilbert and Erik Johnson are all on injured reserve.

Up front, the Avalanche are one of two teams in the NHL with three forwards averaging more than 20 minutes of total time on ice. Nathan MacKinnon, Mikko Rantanen and Gabriel Landeskog all rank amongst the Top 21 forwards in TOI this season across the NHL. As one of the most formidable lines in the league, which combined for eight points in the two prior meetings this season, they are certainly a focal point for stopping Colorado.

“They volume shoot, they’re not selfish, they don’t need to be cute or fancy,” McLellan said, of that line. “They shoot the puck, they go and get it again and I think MacKinnon had 10 shots the other night, the line had 19. There’s some nights when teams only get 19 shots on goal. For as good as they are with the puck, they’re good without it, recovering it, they make it hard on everybody.”

5,280 Feet
Google informed me that we are currently 5,280 feet above sea level here in Denver. As Remember The Titans will tell you, that’s a mile high.

When I worked in the AHL with the Ontario Reign, the altitude was always a conversation topic, especially the first game of a two-game set in Colorado. We always went there for two games, and of the four trips the Reign made, since Colorado entered the AHL, the Reign went 0-4-0. As you enter the visiting locker room area at Budweiser Events Center, home of the Colorado Eagles, your current altitude is plastered in massive text on the door you walk through.

That number is just over 5,000 feet, similar to what the Kings enter into tonight. It’s no excuse, you don’t get a period to settle in before they start counting the score, but it was always something that got brought up. The general sentiment was that you’re aware of it, you notice it, you’re mindful of shift length and that you should settle in after the first few shifts or so.

Between the NHL and AHL, just about everyone on this Kings roster has played a game in Colorado, so there’s nothing that should come as a surprise. As Todd McLellan put it this morning, it’s something that the team is aware of, but it’s not something that can become more of a factor than it is.

“The players will discuss it, when we have our meeting, we’ll talk about shift length and the ability to sustain pressure, relieve pressure due to shift length,” McLellan said. “The players are smart enough now to know where we are and how it affects them. I thought, last year, when we played the outdoor game in Colorado Springs we did a good job of managing it. It’s talked about every time a team wheels into Denver, it’s known leaguewide, so I don’t think there’s going to have to be a major conversation about it.”

The Avalanche have been a good team at home, but not staggeringly better at home than they have been on the road, over the last three seasons. From 2017-20, the Avalanche have ranked, on average, as the league’s 11th best home team, and the 12th best team overall. This season, Colorado is 7-4-1 on home ice………and 7-4-1 on the road.

The altitude is there, we’re all aware of it, and that’s that.

DR. anDREas
Hear from forward Andreas Athanasiou in advance of tonight’s game. Athanasiou has collected a point in six of his last eight games, including a goal in both games played in Anaheim this week.

He has brought an element of skill and speed to the Kings this season, and showcased that in a highlight-reel goal on Monday. Athanasiou takes us through that goal, talks about the team creating higher-quality offensive opportunities as of late, and his style of play here with the Kings, compared to stops in Detroit and Edmonton.

Game Thread is up next in Colorado, before the Kings and Avalanche square off this evening at 6 PM Pacific.

By Zach Dooley
76 Comments
Behind the Scenes