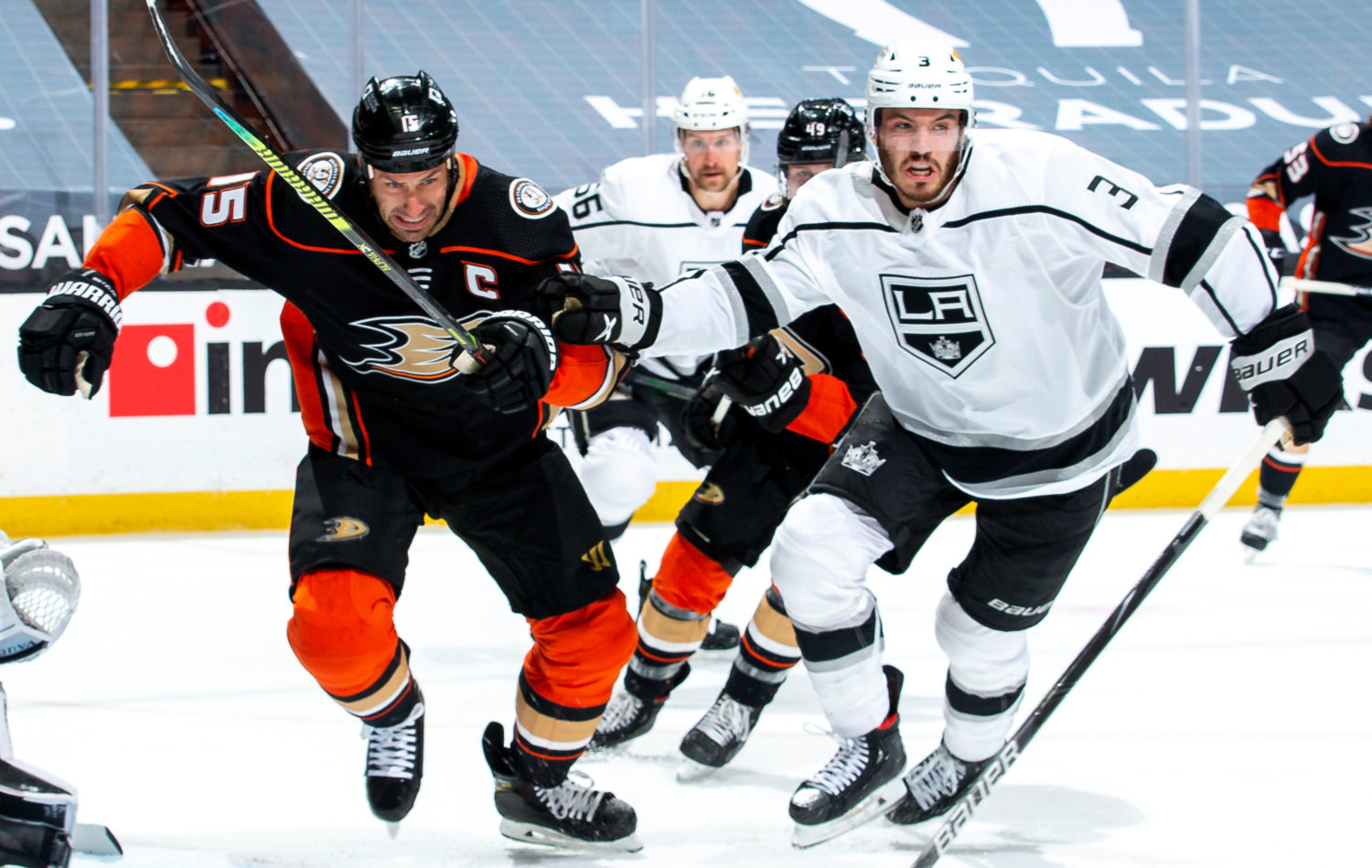 The Kings were back on the ice this morning at Toyota Sports Performance Center, in between away games versus the Anaheim Ducks.

Todd McLellan wasn’t particularly happy with his team’s play as a whole in yesterday’s 6-5 overtime defeat, lamenting individual mistakes, especially those in the defensive zone, that cost the team.

With that in mind, we got a bit more insight on some of the lineup decisions made for yesterday, including a Tobias Bjornfot update, some moves that might be coming, and some insight from Drew Doughty and Matt Roy on yesterday’s performance.

Making Moves
The Kings made a few lineup moves yesterday, with one in particular panning out.

McLellan moved center Blake Lizotte up onto a line with Adrian Kempe and Trevor Moore, with the trio combining for two even-strength goals, both from Kempe, who tallied a hat trick on the evening.

“Other than their first shift, when they got scored on, I thought they won the majority of the shifts they played,” McLellan said earlier today. “Throughout the night, they were willing to forecheck, they had a tenacity to them that kept a lot of plays alive. A lot of simple plays, strip the puck, make one pass, shoot it. They didn’t have to get cute, they didn’t try to over-create, they were a pretty consistent line the whole night.”

Lizotte-Kempe was a frequent staple on a line last season. Outside of Austin Wagner, neither player saw more time on ice last season at even strength with another teammate than they did with each other. After they played together a bit at the end of Saturday’s game, when condensed down to three lines, McLellan reunited the trio last night, to some success.

“We had that line together against St. Louis late in the game, and they seemed to have a bit of a spark,” McLellan said today. “Since JAD has been gone, our third and fourth lines have been kind of in flux, with players moving in and around. We gave Rasmus a look, Amads has been in and out, so we’re trying to find some consistency. While that line picked it up, I’m not sure that we got enough from a few other lines. It was a calculated guess of who would play well together, and as it turns out, after their first shift, they were probably our best line.”

What lies ahead up front?

McLellan’s post-game comments about several players not showing up on Monday, thoughts that he reinforced today, makes you think that we might see some moves made before the team plays on Wednesday. The fourth line played just one total shift in the third period, and you wonder if the Kings bench boss might start there.

In today’s practice, we saw Michael Amadio and Austin Wagner moved to skate with the group in white jerseys, while Matt Luff and Rasmus Kupari moved to gray. That signals we might see some changes made on that line for the rematch against the Ducks tomorrow.

“There’s a lot of factors that go into it,” McLellan said. “Time of year, who’s playing well, who’s played well together in the past. Our group tends to keep pairs together as much as we possibly can, maybe only flip one individual out. It’s also, sometimes, when you inject somebody who’s been out of the lineup, they tend to give you a good game because they’re real hungry and they want to stay in, so you take that into consideration. Home-Road, who might they play against, who they could match up against, do they penalty kill, are they on the power play, are they on either? There’s a lot of factors that go into that, how are you going to distribute the minutes from night to night, center-ice men, faceoff situations, there’s so many factors that go in and during a game, you make adjustments. Yesterday, we went down to three lines, you’re looking for nine forwards, five D sometimes that are playing the best and you run them. Unfortunately, some guys get left out and that’s just the way that it is.”

Another move made yesterday saw defenseman Tobias Bjornfot exit the Kings lineup, after the 19-year-old defenseman had dressed in each of the last 11 games. Bjornfot was a standout last season with the Ontario Reign, and had partnered with the every-steady Roy, since the Michigan Tech product returned from injury in mid-February.

Bjornfot did not skate with the group today and is “battling” something at the moment, meaning that the change was related to that, rather than due to performance. Bjornfot is not considered to be fighting anything serious, and per McLellan’s media availability this morning, at this time, he’s expecting to see him in tomorrow’s lineup. Exhale, Kings fans.

“He’s battling a little bit, just not feeling right,” McLellan said. “We expect him to make progress and be ready to play tomorrow.”

Here’s how the full group lined up –

When you look at how yesterday’s game went, from a Kings perspective, you saw flaws from an individual standpoint, rather than a systematic, team-wide standpoint. McLellan referenced this after yesterday’s game, and one of the team’s most vocal leaders, Drew Doughty, made similar points after today’s practice.

Doughty was confident that the types of mistakes made yesterday are correctable, and quickly, as we get ready for tomorrow’s rematch versus Anaheim.

“A lot of the goals they scored came off our stick,” Doughty said. “When we look at video, we all watch our shifts individually and we know we need to clean it up. We had some really good players last night, and we had some who weren’t so great. We need everyone to be rolling together.”

On a night when many of the Kings did not have their best, a player who brings night-in, night-out consistency is always appreciated.

Matt Roy has that characteristic, and was a +2 in the 6-5 overtime defeat, on a night where he ranked second amongst Kings defensemen in time-on-ice, with just over 20 minutes at even strength and nearly 21 in total. Roy’s even-strength time-on-ice was 3:27 more than his regular-season average to date, and he was utilized late in the game, with the team chasing a goal.

Roy talks about bringing that consistency to the lineup, being on the ice late in the game, and how much being in the last year of his contract factors into his mindset, if at all.

Reign Voices
In case you missed it, the Ontario Reign will be utilizing several play-by-play voices this season, after regular broadcaster Cameron Close called his last game last week. Hall of Famer Nick Nickson called his first of six Ontario games this past weekend, while Daryl Evans provided color commentary, as he will for much of the remainder of the season.

Also factoring into the rotation is Francisco X. Rivera, the Spanish-language play-by-play voice of the LA Kings, as well as Josh Schaefer, a Southern California native and the former voice of Arizona State hockey.

Rivera will be making his English-speaking play-by-play debut this weekend, on Friday, with Evans partnering him on color. Bill Douglas of NHL.com did a profile of Rivera, as he makes a groundbreaking step with this weekend’s game. A good read, which can be found here.

The Kings are scheduled for a morning skate tomorrow in El Segundo, before traveling to Anaheim for the rematch in the evening. Puck drop is 30 minutes earlier, at 6:30 PM from Honda Center.

By Zach Dooley
322 Comments
Behind the Scenes