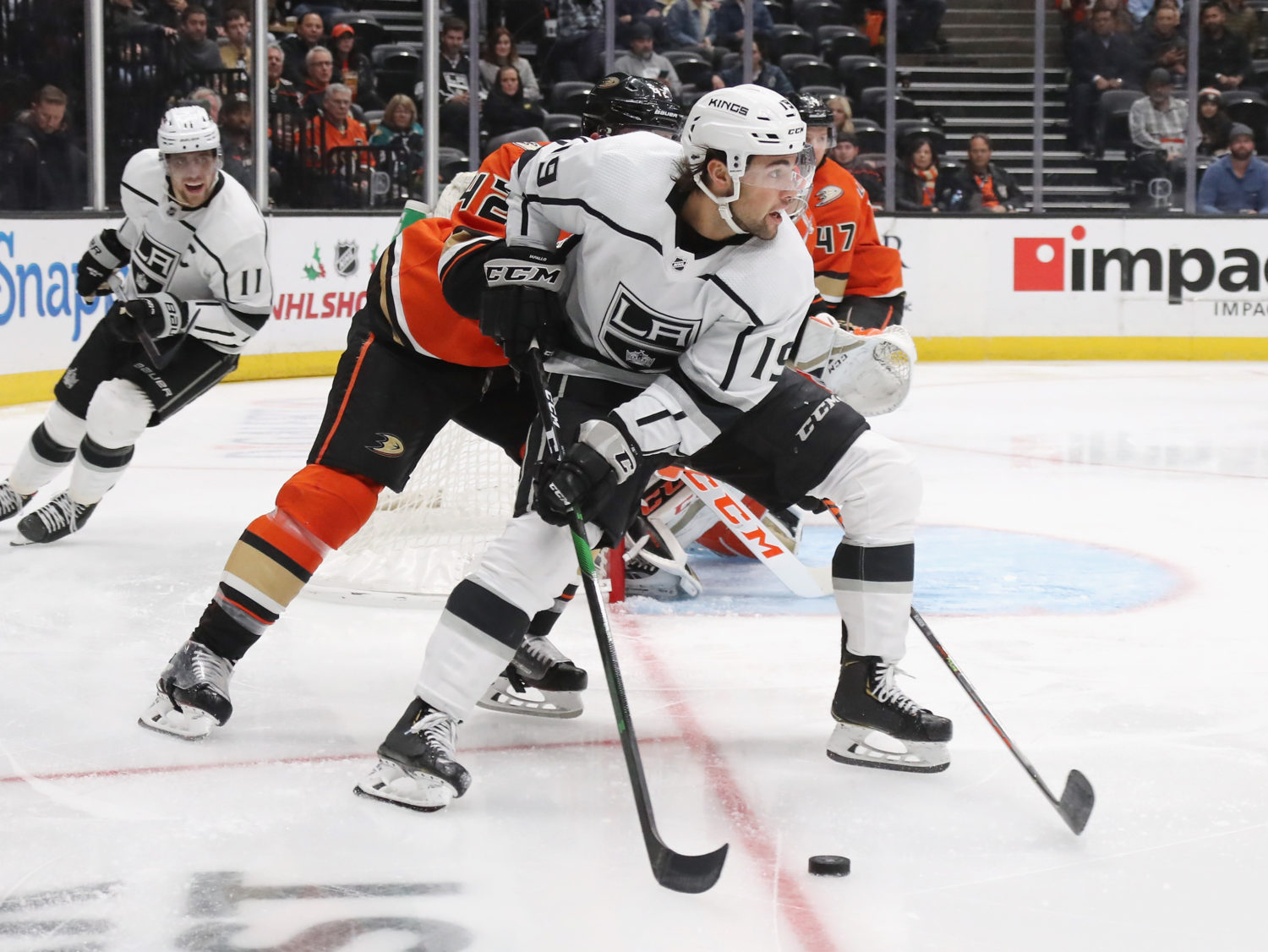 TONIGHT’S MATCHUP: The Freeway Faceoff is back, with the first trip of the season to Honda Center. The Kings and Ducks square off this evening, for the first of two meetings in Anaheim, tonight at 7 PM.

HEAD-TO-HEAD: The Kings and Ducks have met just once this season to date, with forward Arthur Kaliyev, currently with AHL-Ontario, scoring the lone Los Angeles goal. Defenseman Drew Doughty and forward Michael Amadio collected the assists on the play, with Doughty’s 25 career assists versus the Ducks in his NHL career his second-most against any one franchise. Anaheim was led by forward Nicolas Deslauriers, who tallied a Gordie Howe Hat Trick, with a goal, an assist and a fight, in the 3-1 Ducks win.

KINGS VITALS: The Kings hit the ice for morning skate today, before heading to Anaheim in advance of tonight’s game versus the Ducks.

The group was without goaltender Jonathan Quick this morning, who was banged up towards the end of the win over St. Louis and is considered day-to-day at this point. With that in mind, expect goaltender Cal Petersen to get the start tonight, with one of Troy Grosenick or Matthew Villalta backing up. Regardless of which individual, that will require a transaction with Grosenick in the AHL and Villalta on the taxi squad.

Here’s how the team lined up this morning –

Petersen lost the only start of his NHL career against Anaheim, but it wasn’t due to much fault of his own. The Iowa native stopped 40 of the 42 shots sent his way, in a game that the Kings have labeled as perhaps their worst of the season (more on that below). Petersen carries a .952 save percentage and a 2.03 goals against average versus Anaheim into tonight, and has posted strong numbers in total this season, with a .924 save percentage and a 2.47 goals against average. The Kings have earned a point in each of the last six games that Petersen started.

DUCKS VITALS: Backup goaltender Ryan Miller got the start for Anaheim on Saturday, which leads you to believe that John Gibson might return between the pipes tonight. Gibson was the victor in the previous Kings – Ducks game, back in February, as he made 20 saves on 21 shots faced. All-time, Gibson is 11-5-0 in games against the Kings, with a .935 save percentage and a 1.84 goals against average.

The Freeway Faceoff
Both the Kings and Ducks enter tonight’s action off of comeback, overtime victories this past weekend. The Kings wiped out a three-goal deficit, in a 4-3 win over St. Louis, while the Ducks overturned a two-goal deficit in the third period, eventually winning 5-4 in overtime over Colorado.

Good momentum for both teams coming into a rivalry game that always seems to feature that extra bit of fervor and emotion. Whenever Southern California’s two teams square off, there’s a bit of added intensity.

“I think anyone who is a part of either of these two organizations feels that California battle,” forward Blake Lizotte said this morning. “It’s always a lot of fun, it’s a heavy game against them always, it’s a good battle, there’s a little extra animosity between the two. I’m looking forward to it.”

The coaching staff feels it too.

McLellan discussed earlier today that there is that extra bit of energy in the air when the Kings play Anaheim, or one of their other rivals such as San Jose or Vegas. With or without fans in the building, that exists, though having the home crowd behind them in either building certainly brings an extra level.

“When we play Vegas, San Jose, Anaheim, those games, those in-state games, seem to take on a little more hype, a little more intensity, that’s why they’re called rivalry games,” he said this morning. “This series of games won’t be any different than it has been in the past, the only difference is the fans are at home, cheering loud. They aren’t heard, but we know they’re there and I’m sure the Ducks are saying the same thing about their group. The 40 players that play tonight are going to play hard, and it’s going to be a good game.”

Olli Maatta experienced the rivalry for the first time in early-February, in the first meeting of the season. Although the game did not go the way the Kings envisioned it – more on that below – Maatta got his first taste of what a rivalry on the West Coast has to offer.

“I know this [rivalry], versus Anaheim, is tough,” Maatta added. “It’s a good one, the game was fun to play last time. You don’t hear much about it, every team has their own, but they have a long history here, with the players still playing in it, but it was intense, and that’s what we’re going to expect tonight too.”

Freeway Bounce Back
It’s been said numerous times that the Kings were unhappy with their last performance against the Ducks, a 3-1 defeat on home ice back on February 2.

“It wasn’t good from the beginning to the end and I could probably take the rest of this 10 minutes that we have and just start rattling off a lot of areas,” McLellan said this morning, of what he didn’t like from that game.

The Kings had returned from a four-game road trip a few days prior and had an extended stretch without games leading into that day. It was also the team’s first game without a quartet of regulars, with Lizotte and Andreas Athanasiou on the COVID-19 Protocol list, and defensemen Sean Walker and Matt Roy out with injuries.

The result, from a Kings perspective, was not ideal.

“I think we’ve got to be way better than that, that game could be one of the worst games that we’ve played this season,” Maatta said. “We’ve just got to be ready, right off the bat we weren’t ready to go, and they took it over. The first period, when you play like that, it’s tough to come back. They got the momentum out of that, and I think today it’s got to be right from the start, play our game.”

On that day, the Ducks held a 65 – 23 advantage in Corsi at 5-on-5, controlling nearly 74% of the shot attempts throughout the course of the game. The Kings had two players – Anze Kopitar and Alex Iafallo – in the positives that night, while the Ducks didn’t have a single player in the negatives. It was just one game, one that McLellan has touched on several times now since, but it was certainly not the way they want to play.

It’s also important to point out that the game was now over a month ago, and both teams have grown, they’ve evolved and are different today than they were in early-February.

While McLellan said that you always look at your past games against a team, when preparing, he also noted that there’s only so much you can take from a game in which the Kings were so far below their standards.

“They played a really good, strong game in our building, and we didn’t play very well, so there’s only so much you can take out of it, but you always reference your past games,” McLellan said this morning. “It’ll give you an idea of some tendencies that your opposition is throwing at you, plus you can also review where your team was at that point, and we weren’t very good that night.”

The Kings know they need a stronger performance than that day, and seem focused on achieving that at Honda Center later this evening.

Blake Erie
Hear from Kings forward Blake Lizotte from this morning, as he talks about the Kings – Ducks rivalry, getting back to 100% after returning from the COVID-19 List, and playing with a variety of linemates, throuhgout the lineup, so far this season.

Game Thread from Anaheim is coming up next!

By Zach Dooley
45 Comments
Behind the Scenes

By Zach Dooley
1,020 Comments
Behind the Scenes