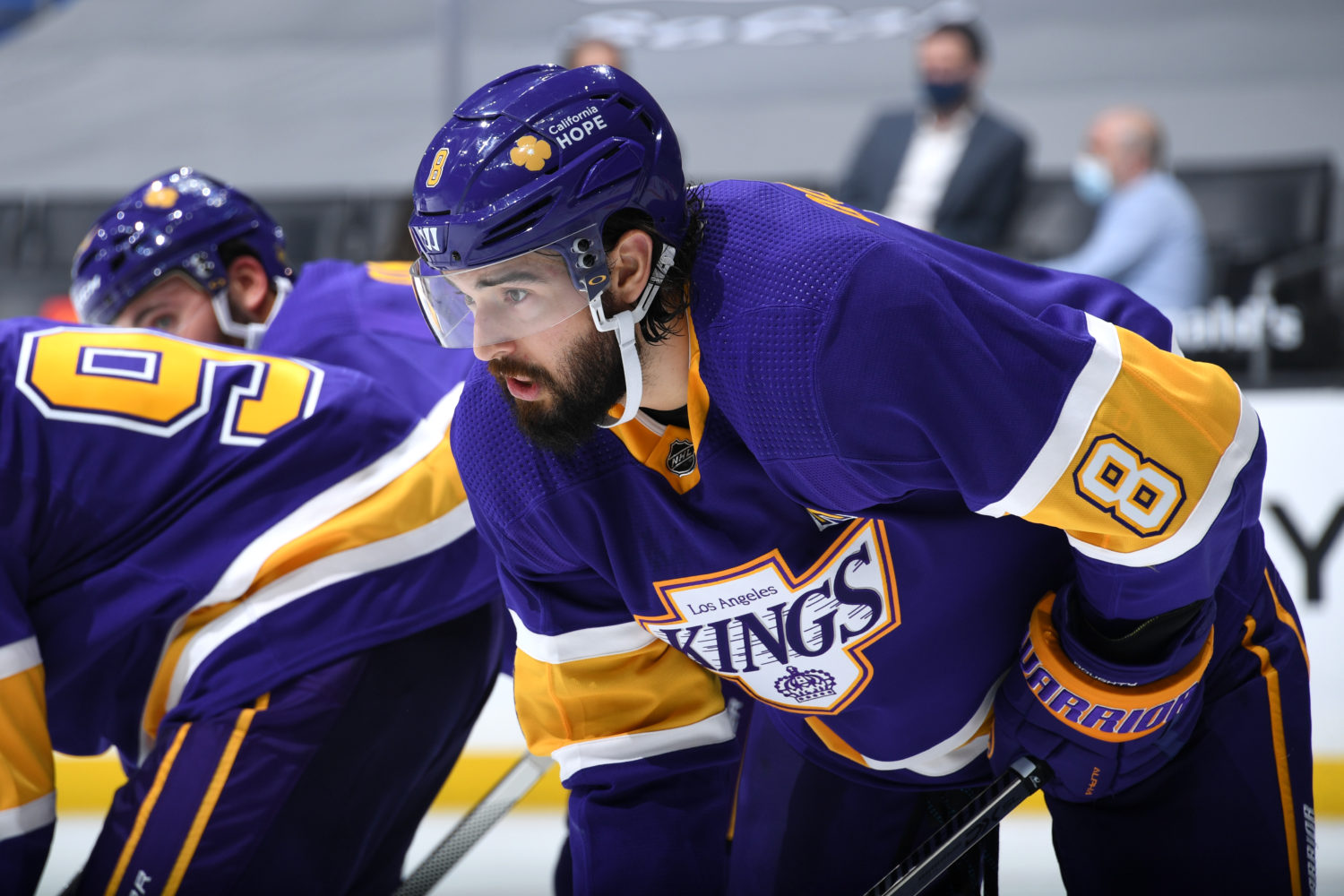 TONIGHT’S MATCHUP: It’s the final game of a six-game road trip, concluding this evening in Minnesota. The Kings enter tonight’s game at 4-1-0 on the trip to date, and faceoff against a Wild team that has won five straight coming in, extended with yesterday’s 3-1 win.

HEAD-TO-HEAD: Kings forward Jeff Carter scored the lone goal for the Kings last night, as he continued his strong play against Minnesota. Carter has seven points (2-5-7) from six head-to-head matchups this season, leading all scorers. Carter’s 30 career points (14-16-30) against the Wild are his most against any West Division foe. With the assist on Carter’s goal, forward Gabriel Vilardi collected his fourth career point from seven games against Minnesota, his most against any opponent in his short NHL career. For the Wild, forward Joel Eriksson Ek collected his fourth goal from six games against the Kings this season, while Kirill Kaprizov (3-2-5) and Jordan Greenway (0-5-5) collected their fifth points each.

KINGS VITALS: The Kings did not skate this morning in Minnesota, considering the back-to-back, so we won’t know exactly what tonight’s lineup will look like until closer to puck drop. Defenseman Mikey Anderson, who skated yesterday morning but did not play last night, is considered day-to-day with a lower body-injury. Consider him questionable to return tonight.

Yesterday’s game marked the first time in a while that the Kings have used the same lineup on consecutive nights. On the team’s six-game winning streak, which came to an end, the Kings made at least one lineup change in each game. For reference, here’s how the team finished the game last night –

We say finished the game, because the Kings did shuffle their bottom nine forwards midway through. Andreas Athanasiou earned a bump to the second line, and that trio not only led the Kings in ice time during the second period, but combined for the only Los Angeles goal of the game in the third period.

Todd McLellan pointed to Athanasiou’s legs throughout the game as a reason for the change, as well as a desire to get Adrian Kempe firing again, after his scoring has dried up a bit in recent games.

“I thought Athanasiou was one guy who had some legs tonight,” McLellan said after yesterday’s game. “Some of our top guys looked a little sluggish, but I thought he had legs and he was around the puck so we bumped him up a bit. Kempe went down with the other line, he’s a guy that we’ve got to get going, I think he has one goal in the last 14 games. He’s such an important player for us, so we’ve got to get him back producing, just so he can take some of the pressure off of some of the other guys.”

With the back-to-back, you would expect to see Cal Petersen make the start this evening in the rematch against the Wild, for his second start of the season versus Minnesota.

Petersen’s first outing was a dazzling, 32-save effort here at Xcel Energy Center, in a 2-1 Kings victory. Lifetime against Minnesota, Petersen is 2-0-0 with a .934 save percentage and a 2.00 goals-against average. Following his win in St. Louis, Petersen bolstered his save percentage on the season to .931, which is the sixth-best in the NHL.

WILD VITALS: For the Wild, expect to see a goaltender change as well, with Kaapo Kahkonen expected to get the start tonight, per Michael Russo of The Athletic. Prior to Cam Talbot’s return last night, Kahkonen had started the previous five games for Minnesota, posting a 4-1-0 record, with the 1 being a loss at STAPLES Center against the Kings 13 days ago.

The line of Kaprizov, Rask & Zuccarello combined for the Wild’s first goal of the game and has accounted for 21 points over the team’s last four games, all victories. After the game last night, McLellan was complimentary of both Kaprizov and that line as a whole.

“If he isn’t the top rookie in the league, he’s got to be one of the top 2 or 3,” McLellan said of Kaprizov. “This was game six against him already, and every night he’s gotten better. He’s been a factor, I think his line is very good right now, they complement each other. For me, I just see him along the boards in piles, roll off and come out, he’s a very slippery player.”

What Can Change In 24 Hours?
The Kings don’t have a ton of time to sit on last night’s loss, with the quick turnaround just one day later. It’s not like the team has stacked up losses – last night’s game snapped a six-game winning streak, which featured a lot of good play – but as McLellan said after the game, concerning signs crept into the Kings game in St. Louis, but were perhaps masked by the goaltending duo of Petersen and Quick.

Quick was not the problem last night, as the Kings didn’t respond well to conceding the game’s first goal, and by the time they righted the ship and “stopped the bleeding”, it was too late to dig themselves out of a three-goal hole.

“We had a three-minute lapse, misplayed one off the end-boards for the second one and the third one was just a mess in our zone,” McLellan said last night. “It took us the rest of that period and pretty much all of the second period to stabilize in the game. I just think our game was getting a little sick in St. Louis, I think I mentioned that after playing there, that our puck decisions weren’t very good.”

So what can you really do to fix things in such a short timespan? There aren’t wholesale changes to be made, either in terms of personnel or tactics, that you can really implement in such a short turnaround.

It’s on the team to make the necessary adjustments, and return to the way they played for the first 4-5 games of the winning streak. After last night’s game, Anze Kopitar said that the Kings simply didn’t make enough plays, and that they lost the battles they were winning in the games preceding. It’ll take a better effort from the group tonight, and they know that.

“Just make better plays – Passing the puck on the tape, making sure we don’t lose coverage, playing less in our zone, and obviously not giving up the goals,” Kopitar said. “It’s going to have to be better, it’s going to take a better effort, and a better job, on our part tomorrow night.”

Uniform Perfection?
Tonight, we will see the first Reverse Retro vs. Reverse Retro battle of the season from a Kings perspective. The Kings are 0-1 in their forum blue uniforms, and 2-0 when facing Reverse Retro concepts, so one of those records will change.

Both teams had widely praised uniforms when they were released in advance of the season. The Kings’ combination of their forum blue and gold, with the 90’s logo was universally ranked as one of the league’s best, while Minnesota’s nod to the North Stars, combined with a Wild logo garnered similar praise.

We could be in for a treat tonight, seeing both uniform schemes in action. 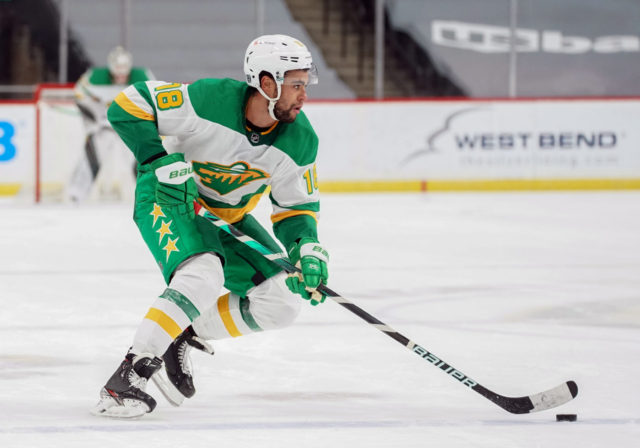