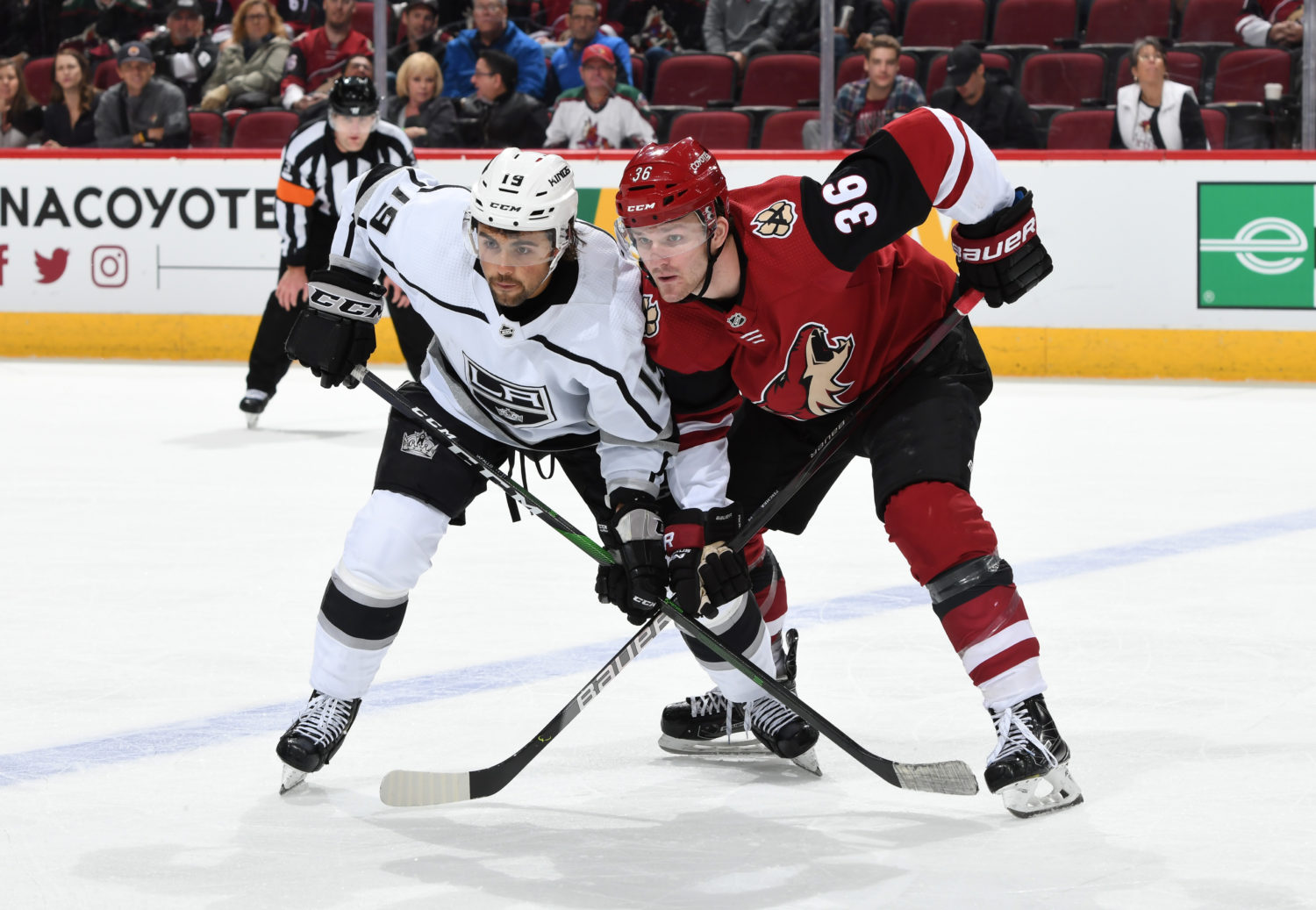 TONIGHT’S MATCHUP: The LA Kings hit the road to begin a season-long, six-game road trip this evening in Arizona, in the first of two meetings in three days against the Coyotes. The Kings are on the road through the end of the month, with stops in St. Louis and Minnesota to follow.

HEAD-TO-HEAD: The Coyotes are the final new opponent that the Kings will face this season. Los Angeles posted a 1-2-0 record last season against Arizona, including a 1-1-0 mark at Gila River Arena. Last time the Kings were here, Alex Iafallo collected a hat trick, including the overtime game-winning goal, in a 3-2 victory. Iafallo’s three goals led all Kings players in the head-to-head series, while Anze Kopitar also tallied three points (1-2-3). The Arizona trio of Christian Dvorak, Nick Schmaltz and Conor Garland (all 1-2-3) led the Coyotes in the head-to-head series with three points apiece.

KINGS VITALS: The Kings skated this morning at Gila River Arena in advance of tonight’s action. With the exception of Jeff Carter, Drew Doughty and Olli Maatta, all players took the ice this morning.

After Matt Roy returned to the lineup on Tuesday against Minnesota, Blake Lizotte could make his own return to the group tonight. Lizotte moved into the regular rotation at practice yesterday, and Todd McLellan noted that he is an “option” for the Kings to use tonight.

Andreas Athanasiou and Sean Walker were also on the ice, but are not expected to be in tonight’s lineup. Athanasiou is working his way back off of COVID-19 Protocol, while Walker continues to wear a full cage as he recovers from an upper-body injury. McLellan said earlier today that Walker will play on this trip at some point.

While not confirmed, the information above gives us a look at a potential lineup tonight. If he does check-in tonight, Lizotte would likely replace Lias Andersson, based on practice groupings from yesterday. Additionally, Kurtis MacDermid remains an option on the blueline.

Forwards Boko Imama and Drake Dymsha, recalled from Ontario to the active roster and taxi squad respectively, also skated this morning as did forward Michael Amadio, who was a healthy scratch on Tuesday.

When it comes to working in those players back from injury, McLellan said this morning that he does not subscribe to the broad theory that a player doesn’t automatically regain his roster spot due to injury.

He went on to elaborate that it comes down more to the situation, player-by-play, rather than a general statement.

“I don’t think we can blanket that as a whole,” McLellan said. “There’s players at different spots in their career, there’s players that have a different impact on our team and our game, positional decisions come into consideration. I think that’s a very poor belief to go by. We have to make decisions based on what’s best for everybody at any given moment.”

The quote should give a belief to players who have shined in their opportunities, created by injury. McLellan’s answer shows that it’s a situational thing and that he will make his roster decisions based on the group he feels is most likely to help the Kings win games on a given night.

The Kings have not confirmed their goaltender for tonight’s game. Coming off of a shutout, Jonathan Quick could make his second consecutive start tonight. All-time, Quick is 19-19-4 against Arizona, with a .906 save percentage and a 2.49 goals against average. His next save would be his 1000th all-time versus the Coyotes. If it is Cal Petersen, who started the three previous games before Tuesday, he would be facing the Coyotes for the first time in his NHL career.

COYOTES VITALS: The Coyotes are, likely, just thankful to finally see a team that is not the St. Louis Blues. It’s not because they weren’t successful – Arizona posted a 4-2-1 record in their last seven games – but rather since ALL of those games came against St. Louis.

Due to some COVID cancellations and reschedulings, the teams played a best of seven series, with Arizona taking Game 7 by a 1-0 final on Monday evening after the teams split the previous six. Tonight’s game will be the first for the Coyotes this month against a team that is not the Blues.

Here’s how Arizona lined up last time out –

Defenseman Niklas Hjalmarsson may be an option to go tonight for the Coyotes, returning from injury. Coyotes Head Coach Rick Tocchet heavily implied that Hjalmarsson appears to be a go for tonight, though did not outright confirm his presence in the lineup.

In Arizona, McLellan is expecting to face a team that plays a bit differently. He described the Coyotes as a team whose speed you can’t underestimate, and talked about their ability to create turnovers, steal pucks, and how they do these things as well as anyone the Kings have played to date.

“The pre-scout that I have, and I’ll tell the players this, is don’t underestimate their speed and their tenacity, in all three zones,” he said. “They are quick, they have a tenacity to their game, I don’t know a better way to describe it, their ability to strip and steal pucks, roll out and keep plays alive, is as good as I’ve seen.”

“Their goaltending has given them an opportunity to be very successful and I just think if you’re not prepared to understand how they play, or be prepared to play that way, they can surprise you for sure,” he added. “We’ll try and get our group focused on that, make sure that we’re ready to play, because it’s going to come fast, and they come hard.” 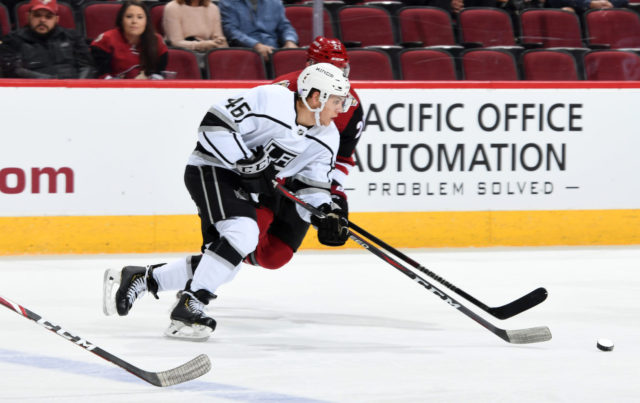 After missing the past six games while on the NHL’s COVID-19 Protocol List, Kings forward Blake Lizotte appears to be ready to return to the lineup, whether that is tonight against Arizona or not. Lizotte has two goals from eight games played so far this season, as he centered a line with Athanasiou and Carter with everyone healthy.

As a rookie a season ago, Lizotte brought an energetic presence to the lineup, as he made the Opening Night roster out of training camp and collected six goals and 23 points during his first professional campaign. Lizotte was a regular on the team’s penalty-killing unit as well, as he was one of four forwards to average over a minute of penalty-kill time. Lizotte has risen to second on the Kings, at 1:57 per game, this season, trailing only Anze Kopitar amongst team forwards in time-on-ice while down a man.

Lizotte has shown an ability to mesh with a variety of different players throughout his time with the organization. He’s a versatile player, who has played anywhere from the second line to the fourth line, and his energy levels allow him to succeed in multiple situations. Regardless of where he might slot in, his return is a welcome one for the Kings.

Defenseman Mikey Anderson spoke with the media after today’s morning skate. The young blueliner has now been paired with Drew Doughty in each of the team’s last ten games. The change was made during the fourth game of the season, which was just Anderson’s tenth career NHL game.

With that change has come a step up in responsibilities for Anderson, both in terms of the number of minutes he’s playing and in the quality of competition that he’s facing. The Minnesota native logged what was an NHL career-high 21:42 of icetime on opening night, skating alongside Matt Roy. Since moving to a pairing with Doughty, Anderson has equaled or surpassed that total seven times already.

Anderson spoke today about the responsibilities that come with playing those additional minutes, the confidence he’s felt by the coaches sticking with him in that role, playing amongst a group of younger defensemen and expanding his game as he becomes more comfortable at the NHL level.

Game Thread is up next from Arizona!