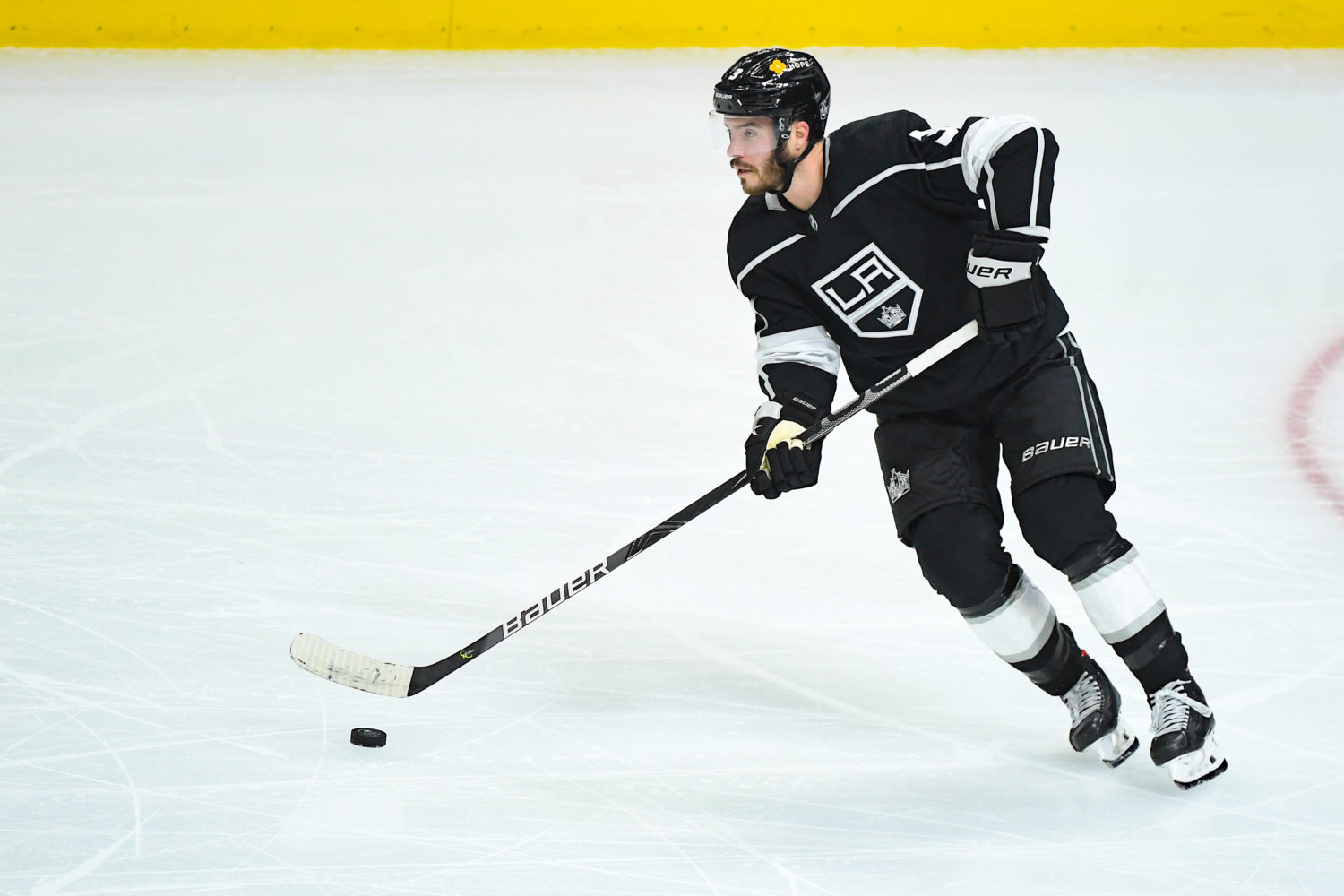 HEAD-TO-HEAD: The Kings are 1-1-2 against Minnesota so far this season, with both games at STAPLES Center resulting in Wild overtime victories, in the first two games of the season. 16 different Kings players have recorded at least one point from four head-to-head meetings with Minnesota to date, led by five points from Jeff Carter (1-4-5). Anze Kopitar also has four assists against the Wild, while Dustin Brown and Andreas Athanasiou each have two goals. For Minnesota, Kirill Kaprizov (2-2-4) and Jordan Greenway (0-4-4) have led the way with four points apiece, while forward Joel Eriksson Ek has three goals from four games played against the Kings.

KINGS VITALS: The Kings have had now three consecutive practice days leading into today’s game, giving them ample time to not only work on facets of their game, but also to potentially add reinforcements to their lineup.

The quartet of Andreas Athanasiou, Blake Lizotte, Matt Roy and Sean Walker have all returned to practice over the last few days, with Roy the longest-tenured of the group in terms of skating in a regular contact jersey.

Athanasiou, Lizotte and Walker did not skate with the Kings this morning, but Roy did. Per Todd McLellan’s availability this morning, Roy will be in the lineup tonight for the LA Kings, and he will need to be activated from Injured Reserve before tonight’s game. Expect to see a series of roster moves in advance of tonight’s game.

This morning’s skate did not reveal full lines for tonight, as three regulars – Dustin Brown, Jeff Carter and Drew Doughty – did not skate. Here’s a group below of who did skate today at Toyota Sports Performance Center.

McLellan indicated yesterday that there is not a defined starting goaltender between Cal Petersen and Jonathan Quick. Therefore, would it be surprising to see Jonathan Quick return between the pipes, after serving as the team’s backup over the last three games? Quick is 0-1-2 against Minnesota this season, but turned in a season-high 40 saves against the Wild back on January 16 in an overtime defeat. All-time against Minnesota, Quick has a 14-9-7 record, a 2.74 goals against average and a .896 save percentage.

WILD VITALS: We are looking at a different Minnesota Wild team, folks. Due to the team’s presence on the NHL’s COVID-19 Protocol list, as well as other injuries, just two of the regulars on the Wild blueline are eligible to play tonight, including Matthew Dumba, who was activated to the active roster yesterday.

Per Sarah McLellan of the Star Tribune, the Wild will be without Jonas Brodin, Brad Hunt and Colton Soucy due to COVID-19 Protocol, Ian Cole, who was just removed from said list, and captain Jared Suprgeon, who is out of the lineup with an upper-body injury. Thus, expect to see Calen Addison, Matt Bartkowski, Louie Belpedio and Dakota Mermis on the blueline tonight for Minnesota, alongside Dumba and veteran Ryan Suter.

Goaltender Kaapo Kahkonen is expected to get the start in goal for the Wild. Kahkonen started both games in Minnesota, after Cam Talbot played in both meetings at STAPLES Center. Kahkonen is 3-3-0 this season, with a.903 save percentage and a 2.86 goals against average, and split his two meetings against Los Angeles, with a 2-1 loss and a 5-3 victory back in late-January.

Per Michael Russo of the Athletic, here are tonight’s expected Minnesota lines –

ROYal Return
As McLellan mentioned this morning, defenseman Matt Roy is slated to return to the Kings lineup this evening against Minnesota.

Roy discussed his recovery from the concussion he sustained, getting back on the ice and the things he learned from being able to watch games from a different perspective.

Powerful Power Play
The LA Kings scored three times on the power play on Thursday against San Jose. We’re just approaching the one-quarter mark of the LA Kings season, but at 24.5%, the Kings are operating at their highest clip on the man advantage since the 1986-87 season. Since 2002, the Kings have finished at over 20% on the power play just three times, most recently in the 2017-18 season.

The differences have been noticeable, to those of us watching from above, and those of us running the show at the center point.

Drew Doughty said after Thursday’s game that it feels different right now on the man advantage. When that group is on the ice, he feels that they’re going to score, with five threats to do so at any given time.

“Throughout my 12 years here in LA, I’ve had confidence we’re going to score in the past too, but when we go out on that ice right now, you really feel it,” Doughty said. “We have threats from every single position. Not that I’m saying we didn’t in the past, we did, but there’s just a different feel. We feel dialed in, we feel connected. Todd is so good at coaching, plus Sturmy on the power play, we’ve put a lot of emphasis on it. Power play has been great, every single guy is doing their job and we need to keep doing it in order to win games.”

One of the big reasons for the success of that unit so far has been an ability to get extended offensive zone time, due to success on zone entries.

Adrian Kempe has served as the focal point of that portion of the Kings man advantage. The Kings have utilized a number of different forms of zone entry this season, but Kempe has been at the center of it all, using his combination of speed and puck handling to either weave into the offensive zone with possession if given it, using a quick pass to either side, effectively, if that’s the play given, or as a last resort, dumping the puck in and forechecking aggressively to win possession.

“It’s a huge advantage, getting the puck in every time, he always makes the right play,” forward Alex Iafallo said of Kempe. “He uses his speed and it helps us to get the puck and recover it. The recovery and break-in part is huge for us.”

Kempe’s work on zone entries has caught the eyes of many. Teammate and fellow power-play player Dustin Brown called Kempe a “one-man zone entry” earlier this season. From behind the bench, McLellan has noticed the same types of things.

He talked this morning about how when Kempe, and the Kings as a whole, are effective in entering the offensive zone, it gives the power play that much more time to get into their set plays and create offensively, as opposed to continually attempting to enter the zone.

“You can gain the entry on the zone the first time, or you can do it multiple times,” McLellan said. “If you waste the majority of the power play just trying to enter the zone, you’re in deep trouble. Not only does it prevent the power play from being effective offensively, but it creates frustration and creates fatigue in a number of guys who need to create the whole ice surface. Adrian has been a key piece in the entries, not the only piece, but the key piece, and he’s fit that role extremely well. Right from the beginning of last season, on through this year.”

Ch, Ch, Changes
As a result of Saturday’s game against Minnesota being cancelled, along with other cancellations around the NHL, the Kings had two adjustments made to their schedule earlier today.

Saturday’s game has been rescheduled for Friday, April 23 at 7 PM, and the Arizona – Los Angeles game, originally scheduled for that day has been moved to Wednesday, March 3 at 7 PM. The Kings were originally scheduled to be off for five days, following the upcoming six-game road trip. That now turns into three days off, and creates a 3-in-4 on the backend, with games following against St. Louis on March 5 and 6, all at home. 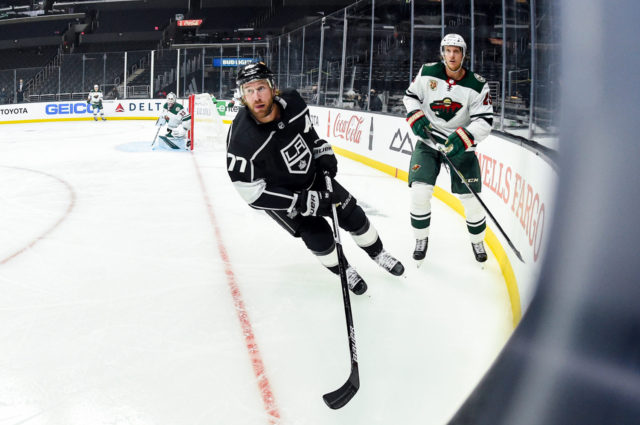 LOS ANGELES, CA – JANUARY 14: Jeff Carter #77 of the Los Angeles Kings skates on the ice during the second period against the Minnesota Wild at STAPLES Center on January 14, 2021 in Los Angeles, California. (Photo by Andrew D. Bernstein/NHLI via Getty Images)

By Zach Dooley
432 Comments
Behind the Scenes