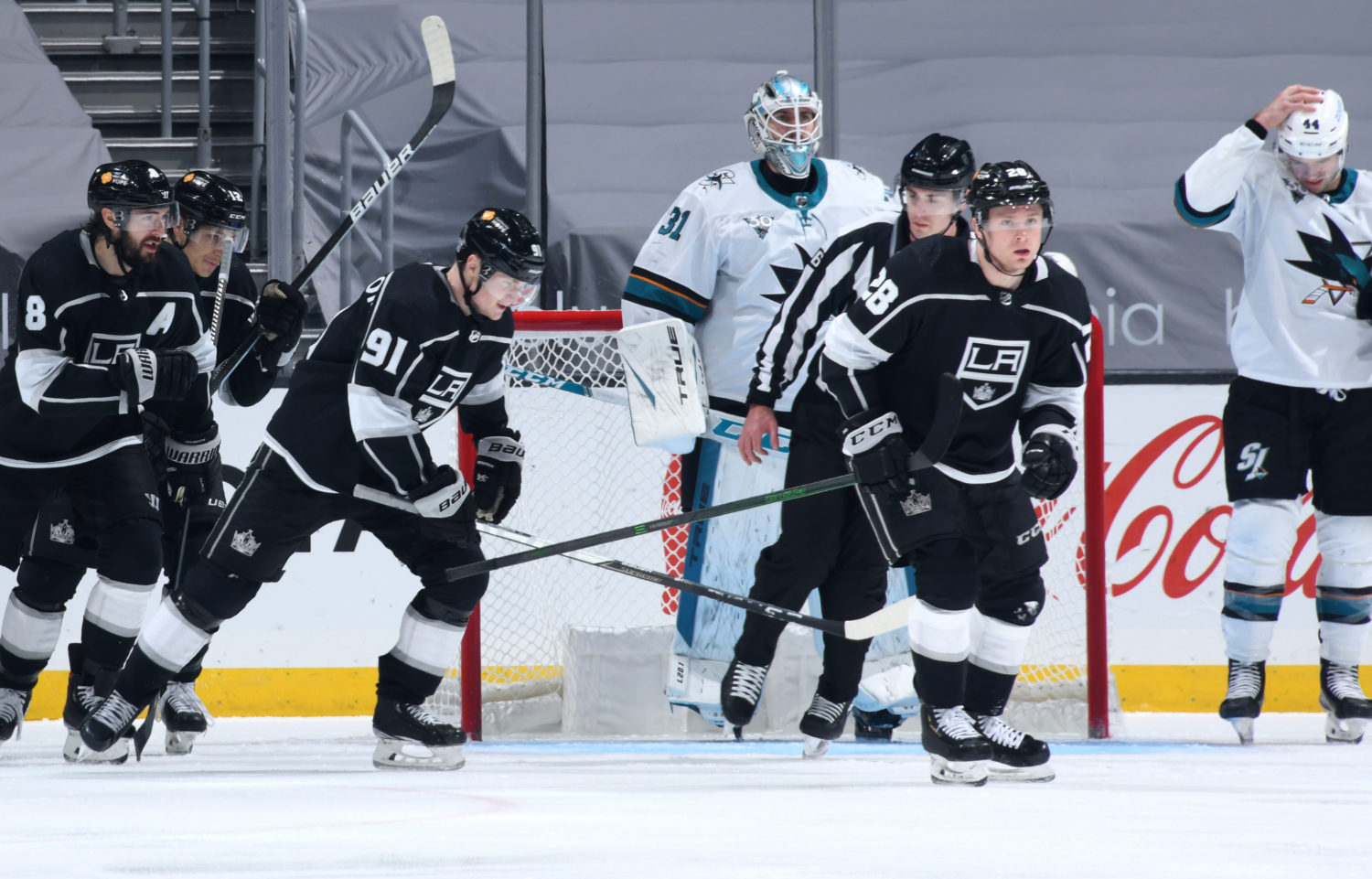 It’s been an eventful four-game stretch for Jaret Anderson-Dolan.

After he was either a healthy scratch or on the taxi squad in each of the first nine games this season for the LA Kings, Anderson-Dolan made his season-debut on February 5 and scored his first career NHL goal in Game 2, two days later. In Game 3, the Calgary, AB native skated an NHL career-high 15:41 against San Jose and in Game 4, he collected his first career multi-point game at the NHL level. 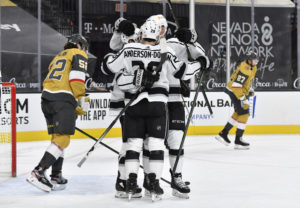 Not a shabby seven-day stretch.

Anderson-Dolan has been at the center position on a line with Trevor Moore and Carl Grundstrom on the wings, which has been noticeable and impactful in their four games together.

“That line has been effective since we’ve put them together, [in all] games,” Todd McLellan said last week. “They’ve worked real hard, they’ve been very conscientious defensively, they haven’t given up very much. They play a simple, straightforward game and they deserved to be out there.”

Playing as the Kings’ fourth line in their first three games, it seemed as if the trio took a quote from McLellan to heart, and that is to bring a spark to the team, in some way, when you’re not playing huge minutes.

In those first three games, they did cash in with Anderson-Dolan’s goal, assisted by Moore in Vegas, but it was about the energy that they brought, as opposed to the scoring chances, that was noticeable via the eye-test. The line was out-chanced in Vegas, but then again the Kings as a whole were outchanced in Vegas. Regardless though, McLellan showed enough faith in what those three players brought together to keep the line intact for the next set against San Jose.

Moore noted that, early on, the trio knew they needed to become a group that the coaching staff, and teammates, could trust on the ice in all situations, to provide responsible minutes.

“The bottom-six guys, to gain the ice time, you have to build the trust of the coaching staff and the team,” Moore said. “As a line, we know we want to be responsible, which is something that [Anderson-Dolan and Grundstrom] already do anyways, and we want to just be a line that’s hard to play against in all three zones.”

On Tuesday, with the game close in the third period, McLellan shortened the Kings bench down from four lines to three, with the Grundstrom – Anderson-Dolan – Moore line jumping up and staying in the rotation. What resulted were season-highs in ice time for Grundstrom and Anderson-Dolan, while Moore played his second-most minutes on the season.

The energy, and hard work, was evident, but even on Tuesday, that didn’t necessarily translate into the scoring opportunities that the trio, and coaching staff, were in search of.

“As far as moving forward, we’ve got to do a better job of creating more offense, myself included,” Moore said, after Tuesday’s game. “Just got to keep more plays alive, get more pucks back on the forecheck, and I think that’s going to come from the hard work and all that stuff.”

If they say you should practice what you preach, then Moore’s words were taken to heart the following game.

What was listed as Thursday’s third line turned it up a notch in the rematch against San Jose. The trio combined for two goals, with Grundstrom and Anderson-Dolan each finding the back of the net. The second goal of the two, which came in the third period, was a perfect example of what the line can do when playing their most effective hockey.

The heaviest forechecker on the line, Grundstrom, bore down with speed on San Jose defenseman Erik Karlsson, creating a turnover below the offensive goal line for the Kings. Grundstrom won possession of the puck and fed Moore in front, where the Thousand Oaks, CA native showed poise on the puck, making the skill play, as opposed to a rushed shot, as he fed Anderson-Dolan at the back post, for the tap-in goal.

Anderson-Dolan threw all the credit to his linemates after the game, calling himself the “beneficiary” of the good work put in by his wingers. The goal, which was a key insurance marker for a team that has struggled to get insurance markers while holding one-goal leads, was great to see, because it showed the evolution of a line. The forechecking was still there, but unlike games past, it wasn’t just the hard work that was showing up, but it was taking that hard work and turning it into quality, offensive chances. That caught McLellan’s eye.

While there are a number of factors that have led to early success between the three players, one such thing has been a similar objective.

All three players have the same mindset out on the ice, they all want to play with speed and energy, and they all seem to be on the same page.

“I think we’re all skating, helping each other out,” Grundstrom said. “We want to play fast, and I think we have the same mindset. I think that’s a big key.”

Anderson-Dolan agreed with Grundstrom’s assessment on playing with speed and believes that where they can provide a spark is by utilizing that speed in their forechecking and integrating physicality, using those tools to change energy, or momentum, in favor of the Kings.

“We can all skate, we all know that, we know that’s what’s going to give us success,” he said. “I think that physicality, that comes with being on the forecheck, can turn the tide of the hockey game pretty quick.”

Looking ahead, perhaps the biggest challenge that awaits this line might be internal competition.

With Blake Lizotte and Andreas Athanasiou returning to the lineup soon, they will likely take their place in the lineup, and where that leaves what has been an effective line is not yet known at this point.

Things like that, however, are out of their control. It wouldn’t be surprising if, despite two regulars coming back into the fold, McLellan continues to keep this line together, three players who have earned a run of games, as a part of the team moving forward. 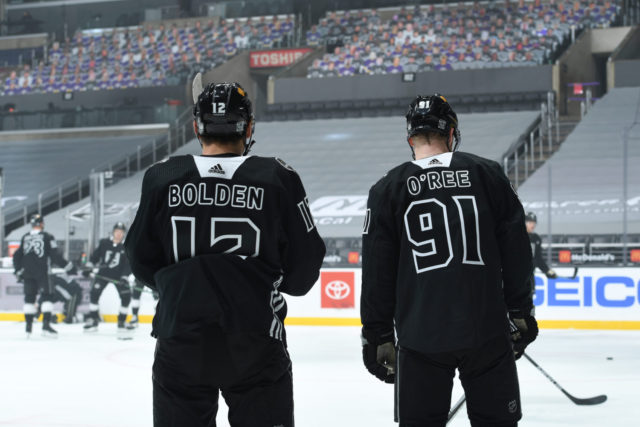 By Zach Dooley
309 Comments
Behind the Scenes