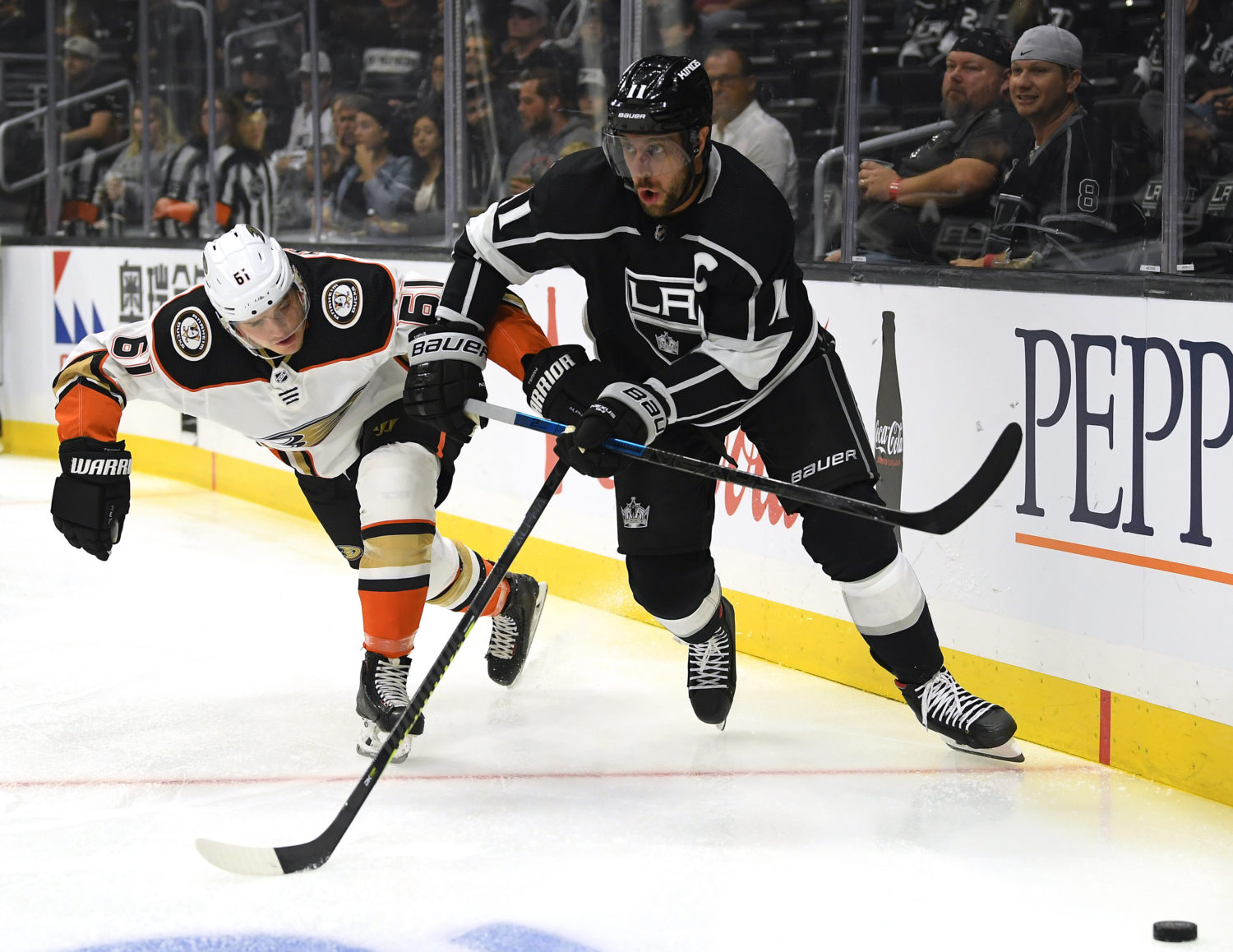 TONIGHT’S MATCHUP: The LA Kings are back in action tonight at STAPLES Center, following four consecutive games on the road. The Kings are 1-1-2 on home ice so far this season, and now host Anaheim in the first Freeway Faceoff of the 2020-21 campaign.

HEAD-TO-HEAD: The Kings posted a 1-2-0 record against Anaheim last season, with the lone game played at STAPLES Center resulting in a 3-1 Ducks victory. No Kings player currently on the active roster had multiple points versus Anaheim last season, but of those expected to play tonight, Jeff Carter and Kurtis MacDermid each scored a goal. In their respective NHL careers, Dustin Brown (27) and Anze Kopitar (24) have more goals against the Ducks than any other opponent. For Anaheim, forward Derek Grant led his team with four goals against the Kings a season ago, while forward Jacob Silfverberg (1-2-3) and Hampus Lindholm (0-3-3) each had three points.

KINGS VITALS: The Kings were back on the ice for morning skate today in El Segundo. While optional, all Kings players skated today with the exception of Drew Doughty and Jeff Carter.

Per this morning’s skate, expect to see goaltender Cal Petersen in net tonight for the Kings. Petersen has yet to face Anaheim so far in his professional career. The Waterloo, IA native is coming off of his best performance of the season, in which he stopped 32 of the 33 shots he faced in a 2-1 victory over Minnesota, earning the game’s first star for his efforts.

In terms of the skaters, forward Arthur Kaliyev is expected to check into the lineup this evening against the Ducks for his NHL debut. Kaliyev has scored three goals from five preseason games in the AHL with Ontario and is likely to slot in alongside Lias Andersson and Trevor Moore on a line tonight at STAPLES Center.

“Really excited, really pumped to play that game, my first game,” Kaliyev said this morning. “It’s going to be a bit nerve-wracking, but I’ll just take it one shift at a time and try my best out there.”

Kaliyev said that he was thinking about his debut a bit last night – who wouldn’t be – but he thought that he got a pretty good night of sleep in advance of such a monumental moment. Looking at tonight’s game, Kaliyev is focused on playing a good, solid game in all three zones, and is just focused on putting his best foot forward.

“I think I’m just going to try and play hard in all three zones,” Kaliyev said. “Defensively, offensively, and in the neutral zone, just try and play my best out there.”

The 2019 second-round selection by the Kings is a well-touted offensive player, with an NHL-caliber shot. The highly-anticipated debut for the 19-year-old forward should come tonight with an Arty Party in Downtown Los Angeles.

DUCKS VITALS: Just one goaltender has played in more games so far this season than Anaheim’s John Gibson, who would appear in his tenth game of the season tonight at STAPLES Center if he gets the start. So far this season, Gibson is just 3-4-2, but his .921 save percentage ranks amongst the NHL’s best, and he is one just five goaltenders with two shutouts to his name. All-time, Gibson is 10-5-0 against the Kings, with a .934 save percentage and a 1.90 goals against average.

Here’s how the Ducks lined up last time out, against St. Louis at home on Sunday.

In the Ducks, it’s a rivalry game. As the saying goes, you throw out the records in a rivalry game, even though the records here a combined 18 games into the season aren’t all that different. 20 of the last 31 Kings – Ducks games have been decided by one goal, indicative of a tight-checking rivalry.

“It’s a rivalry game,” McLellan said. “They’re always heavy games, they’re hard games played in all areas of the rink, I don’t think that’s going to be any different. Some of our opponents, I thought Minnesota played that way, St. Louis had that in their game, so we’ve had a good lead into that type of game here. For us, we’ll be looking at a number of different players, at different positions, which will be a good measuring tool, but I expect us to be ready for a tough night, it always is against that team.”

Many players will be skating in their first-ever Freeway Faceoff tonight, including forward Lias Andersson. He’s been in the NHL before, and he’s played in rivalry games with the New York Rangers. He’s played in international tournaments with Team Sweden, so he knows all about rivalries on that stage as well. Tonight’s he’s excited to add the Los Angeles – Anaheim showdown to that list.

“I’m really excited for this game,” Andersson said. “Guys have been talking about it in the locker room, so we’re fired up. I’m excited to get out there tonight and hopefully get a win.”

Center of Attention
With Blake Lizotte out of the lineup, on the NHL’s COVID-19 Protocol List, the Kings were faced with adding a new center to the lineup for the first time this season.

The team had several options in available and ultimately decided to move Lias Andersson from the wing back to center, while bumping Carl Grundstrom up in the lineup at the same time to fill Andersson’s spot alongside Gabe Vilardi and Dustin Brown.

With regards to Grundstrom, the move was made simply to get a player who is playing well more ice time, as McLellan said this morning. Grundstrom scored in both St. Louis and Minnesota and has been effective since he entered the lineup in the third game of the season. For Andersson, his versatility will be on display once again, as a player who can play wherever he is asked, whenever he is called upon.

“We also needed a center on that fourth line, and that’s where Lias can fill in,” McLellan said. “He has the ability to play both positions, and we feel better about that as well.”

“I’m usually a center, so I’m comfortable playing there, but I liked playing on the wing too,” Andersson said this morning. “I hadn’t played too much on the wing, but I liked it a lot and I feel comfortable in both positions. Now, with Lizzo not playing tonight, I’m trying to fill a center spot and just do as well as I can.”

Two additional options that the Kings had at their disposal were inserting forward Jaret Anderson-Dolan into the lineup at center, where he spent last season with the Ontario Reign, or sliding Jeff Carter into the middle from the right wing.

McLellan spoke yesterday about Anderson-Dolan getting games this season, with both the Kings and Reign, but that day will likely not come tonight. He added today that while there were internal conversations about possibly moving Carter back to center, McLellan has liked the veteran forward’s game on the wing and wants to see him continue to play there for the time being.

“We could do that, and we have talked about it, but the great thing about him is that he’s a utility player, he can play either of the two wing positions and also center,” McLellan said of Carter. “He can take faceoffs, and has taken faceoffs with that line before, and if we have to we can flip things around. We’ve appreciated his game on the wing so far, I think he feels comfortable there and he’s been effective there.”

Reverse Retros Debut
Tonight marks the first game of the season for the Kings in their Reverse Retro jerseys. The Kings have practiced in their Forum Blue and Gold equipment in the last two days of practice, and that gear will be in action, alongside the matching jerseys, tonight at STAPLES Center.

The Kings will wear their Reverse Retro jerseys four times this season, including tonight against Anaheim. The team will also wear the jerseys twice more at home – March 17 vs. St. Louis and April 14 vs. Vegas – as well as once on the road, on February 27 at Minnesota, with the Wild also wearing their own Reverse Retro sweaters on that night.

Still To Come….
Three of the players listed above – Mark Alt, Andersson and Kaliyev – currently reside on the team’s taxi squad, rather than the active roster. Therefore, expect to see at least a few roster moves from the Kings in advance of tonight’s game.

More on those moves, when they happen, to come here on LAKI, along with the Game Thread, before the Freeway Faceoff! 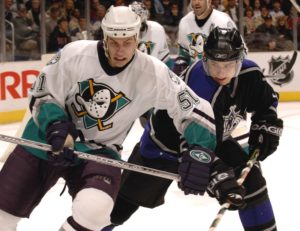 By Zach Dooley
861 Comments
Behind the Scenes