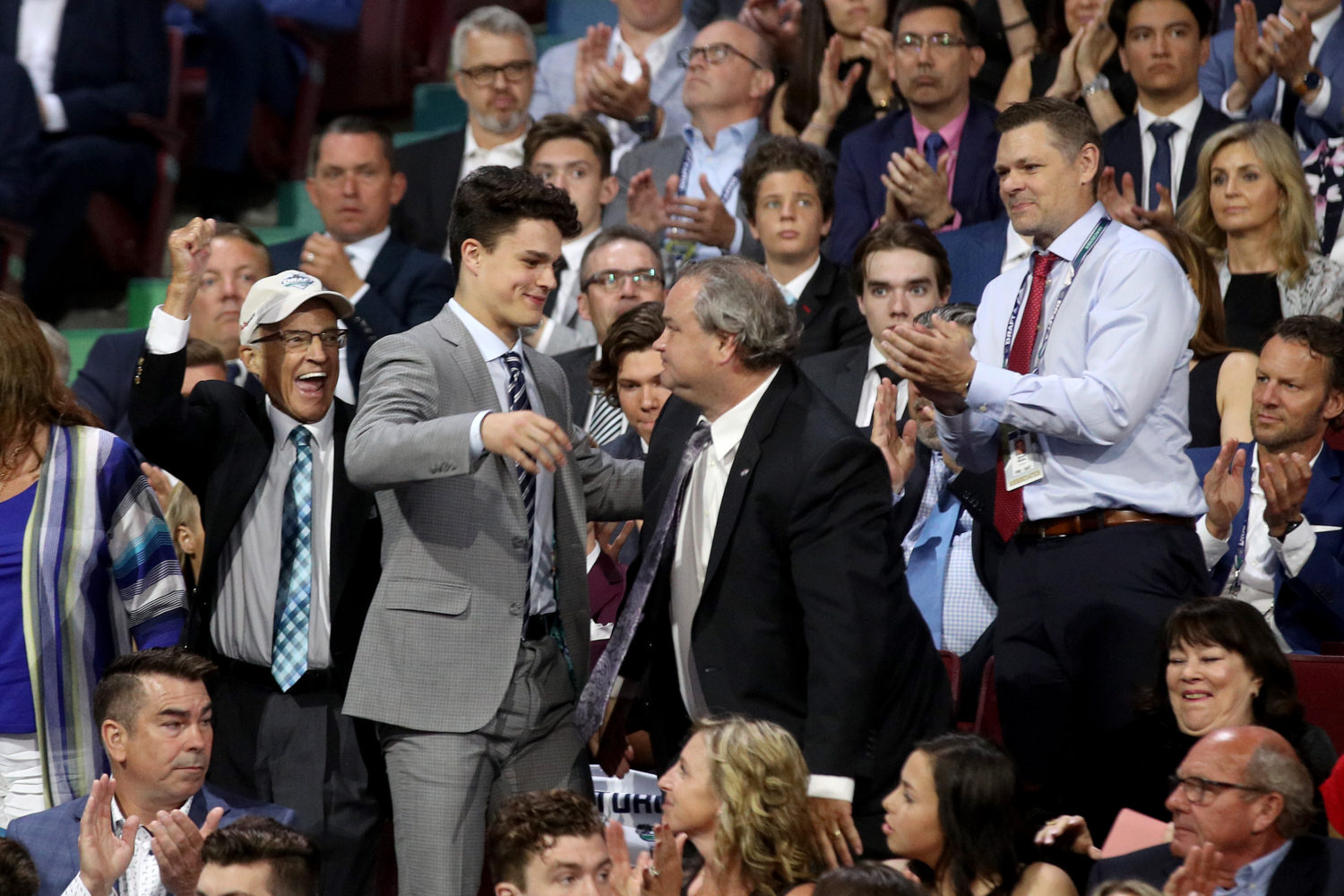 In case you missed it, the Reigny Day Podcast at the start of this week featured Cameron Close and Zach Dooley interviewing The Athletic’s Scott Wheeler. Most Kings fans will remember this past February when Wheeler’s prospect rankings ultimately ended with the Kings having the first overall prospect pool in the league.

Throughout his interview on the Reigny Day Podcast, Wheeler shared his insight on the Kings prospect pool, the Kings’ highly-touted 2019 NHL Draft class as a whole, and his thoughts on who the Kings might select with the number two pick in this year’s NHL Draft. He also commented on recently acquired Kings prospect Tyler Madden, who at the time of Wheeler’s prospect pool rankings being published was the third-highest ranked Vancouver Canucks prospect before being part of the package the Kings received in exchange for forward Tyler Toffoli.

Here are Wheeler’s thoughts on the LA Kings prospect pool and what’s to come: 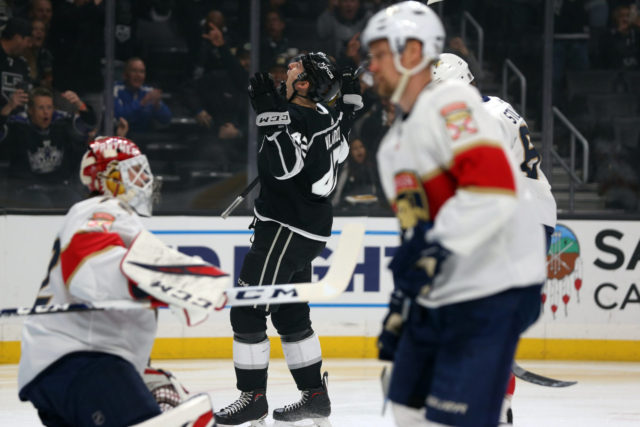 “He’s just one of those guys that knows what he’s doing when he’s on the ice. He’s good at everything. He doesn’t skate particularly well, he doesn’t have the most dangerous shot in the world, but he produces and he makes things happen. He has size and he uses it well. Despite the fact he isn’t a super physical player, he’s a dominant puck-protection player. He’s one of those kids who figures it out. He problem solves when he’s on the ice and he’s also produced in line with players who are a lot flashier than him. A player like that is fascinating to me.”

Vilardi’s journey from being selected 11th overall in the 2017 NHL Draft to making his NHL debut earlier this year was longer than expected due to some injury setback. But the wait proved to be worth it.

After registering 25 points (9-16=25) in 32 games with the Ontario Reign – and ranking third on the Reign in points-per-game (0.78%) – Vilardi made his memorable NHL debut on Feb. 20. That night, just 10 seconds into his first NHL shift, he beat Florida Panthers goaltender Sergei Bobrovsky to register the fastest first goal in NHL history.

“He’s one of those kids who’s always working on the ice. You think about the Brendan Gallagher’s and the Jake Guentzel’s. Those players who never stop moving, never stop working. They’re obsessed with all the little details in the game. They’re angry when they lose a faceoff or lose a battle in the corner that leads to a goal against. You can tell that they care… Turcotte’s one of those kids where you can just see it when he’s on the ice and that’s rare in a player.”

Comparisons to Gallagher, an alternate captain for the Montreal Canadiens, and Guentzel, a Stanley Cup champion at just 22-years-old, illustrates just some of the potential people like Wheeler see in Turcotte that resulted in him being taken fifth overall in the 2019 NHL Draft.

Before agreeing to terms on a three-year entry-level contract with the Kings on March 12, Turcotte skated the 2019-20 season at the University of Wisconsin (NCAA) under the tutelage of former Kings forward Tony Granato. As a freshman, the 19-year-old forward posted 26 points (9-17=26) in 29 games with the Badgers to rank third on the team in points (26) while also tying for third in both goals (9) and assists (17). His .897 points-per-game also ranked second on the club and sixth among college freshmen nationwide.

Prior to joining Wisconsin, Turcotte skated two seasons with USA Hockey’s National Team Development Program where he registered 125 points (45-80=125) in 95 games. Internationally, he represented Team USA on three separate occasions, playing in the IIHF Under-18 Men’s World Championship twice (2018 – silver, 2019 – bronze) as well as the IIHF World Junior Championship in 2020. 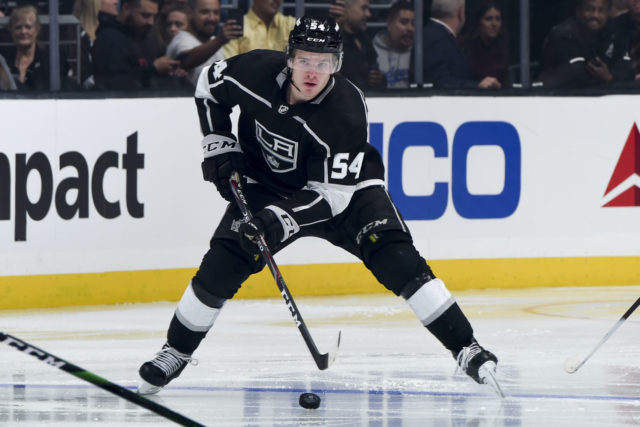 “There’s a quietness to his game. You think about the Dmitry Orlov’s of the NHL these days. The players who, maybe a decade ago, didn’t get to have that kind of a role. They didn’t get to play 20-plus minutes a night at the NHL level. Didn’t get the notoriety that comes with being a player who maybe doesn’t put up 40 points in a season. Björnfot is a player who is never going to have those big counting stats, he’s not going to be a power play guy at the next level. But the rest of his game has proven to me that I probably had him a bit too low on him in hindsight.”

Bjornfot surprised many in the hockey world when his first game of the 2019-20 season came at the NHL level as the Kings opened their season in Edmonton. Most, prior to the season, had expected him to return to his native Sweden. Though his stay with the Kings was brief, and he ultimately carved out a prominent, reliable spot on the blue line in Ontario, his brief appearance at the NHL level left a positive impression on two-time Stanley Cup Champion and Norris Trophy winner, Drew Doughty.

“Really smart player, very calm, good person, I can’t say enough good things about him,” Doughty said of Bjornfot during a conference call with media this past April. “I loved the way he saw the ice and I’m looking forward to working with him and I’m hoping to make him even better than he is right now.”

Trent Yawney, during a media availability last October, said, “From the development camp to the rookie camp to as we stand here today he’s just been steady. He gets it, he moves (the puck), he knows where he’s going with it. At times he makes, what you know is a difficult play or a difficult read, he makes it look easy.”

A look at Bjornfot’s play this season in the AHL, from Ontario Reign Insider.

“It became very hard early on for me to evaluate him as a top prospect and then he got to Northeastern. Northeastern has a way of figuring it out with those guys… He’s another one of those players where you don’t know whether he’s going to be able to make that game work at the NHL level but the skill set is definitely there. He’s a little bit of a wild card for me. I could see him potentially becoming a star-level player if all goes well and if he can get the right kind of opportunity and linemates.”

Madden, who signed a three-year entry-level contract with the Kings on March 30, is a player Kings fans are still getting to know after he was a part of the package the Kings received in a trade with the Vancouver Canucks for Tyler Toffoli. Madden, the son of three-time Stanley Cup champion and 2001 Selke Trophy winner John Madden, was drafted 68th overall in the 2018 NHL Draft.

When the Kings acquired Madden, he was enjoying a dominant sophomore campaign at Northeastern University with a team-leading 37 points (19-18=37) in 27 games that saw his 1.37 points-per-game rank fifth in the country. In his two seasons with the Huskies, Madden contributed to a Hockey East title (2019) and back-to-back Beanpot championships (2019, 2020) while also earning several individual accolades highlighted by being a two-time nominee (2019, 2020) for the Hobey Baker Award.

Internationally, Madden skated alongside Mikey Anderson, another young player in the Kings organization, for the United States at the 2019 IIHF World Junior Championship. The two helped the U.S. reach the gold-medal game where they fell to Finland — and a fellow Kings prospect — in Rasmus Kupari.

“LA was just one of those teams that kept picking players that I loved… I thought Arthur Kaliyev in the second round was a brilliant selection. I think he’s got the purest, hardest shot. Arthur just overpowers goalies and I truly do believe he might have the best shot outside of the NHL…”

When Kaliyev was selected in the second round (33rd overall) at last year’s NHL Draft, it was instantly considered a steal.

His performance in his first post-draft season only solidified that opinion as he went on to receive the Jim Mahon Trophy as the OHL’s top-scoring right winger and being named a finalist for the Red Tilson Trophy for Most Outstanding Player of the Year. He led the Hamilton Bulldogs with 44 goals and 54 assists for 98 points in just 57 games. The 18-year-old finished fifth in the OHL in points, tied for sixth in goals and third in power-play points (41).

On June 3, the Kings announced three-year entry-level contracts for both Kaliyev and defensean Jordan Spence. 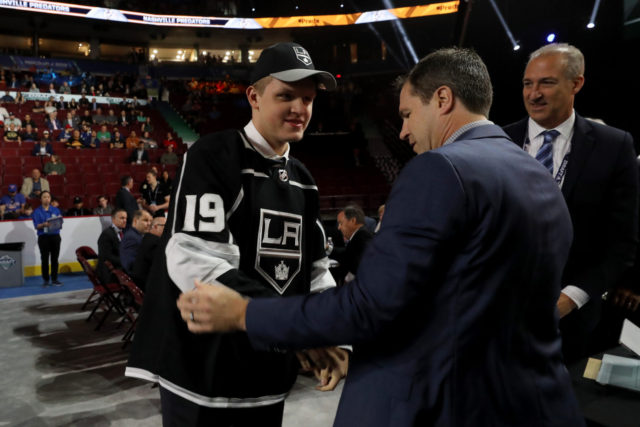 On the Upcoming No. 2 Selection –

“There are normally about three or four players in a draft class that I believe have that all-star potential that can change an organization and I believe there are eight players in this draft class that have that potential. It’s a deep draft class. You don’t have a Connor McDavid or a Sidney Crosby or even an Auston Matthews level talent at the top. Alexis Lafreniere is going to be brilliant but I don’t believe he’s going to be of that quality… Tim [Stützle] is an unbelievable skater. He’s going to be a dynamic transition skater at the NHL level. He’s going to be one of the better skaters in the world. He’s going to be able to turn defenders around and create breakaways for himself… My concern with Tim is hasn’t proven to be a great finisher. I think he’s got an accurate shot but it’s not a hard shot, despite the fact he’s a strong kid… He’s definitely in that mix but I do believe Quinton [Byfield] is the clear choice… He’s fast, he’s 6-foot-4, he can really fly and he can make plays at top speed. That’s allowed his game and his projection to reach that new level. Potentially in three to four years from now as he’s establishing himself in the NHL, if you don’t take him second overall, you could be regretting it.”

The debate over who the Kings will select with the second overall selection in the 2020 NHL Draft will finally be determined on Oct. 9 when the draft is held virtually. Will it be Quinton Byfield, who many like Wheeler project as becoming the name Kings staff will call? Or will the Kings, who already have a German hockey legend in Marco Sturm on its coaching staff, take the highly-skilled German forward in Tim Stutzle? There are also those out there who say Canadian defensemen Jamie Drysdale or Swedish forward Lucas Raymond must not be overlooked.

With the second overall pick, three second round picks, two third and two fourth round picks and a pick in the fifth, sixth and seventh rounds, the Kings will have 11 draft selections in the 2020 NHL Draft to add more depth to their already deep pool of prospects.

We agree with Wheeler. It’s a bright future for sure.