“Special” Bjornfot continues to grow in rookie season, thriving on pair with LaDue

Amidst all of the roster moves, the recalls and send downs, the line changes and alterations, one constant for the Ontario Reign for much of this season has been the defensive pairing of Tobias Bjornfot and Paul LaDue.

The 18-year-old rookie and the 27-year-old veteran have partnered with each other for much of Bjornfot’s time with the Reign. Since Bjornfot returned from the World Juniors in mid-January, the pairing has been inseparable, lining up night-after-night against the opponent’s top players.

“I think we both have a like mindset,” Bjornfot said. “We hate to be [on the ice] when the opponent scores, so we want to be good defensively, and then we try to join the rush and have fun in the o-zone too.”

Despite drawing difficult assignments, Bjornfot has found himself on the ice for 14 goals for, in all situations, opposed to just nine against in the 11 games he’s played with Ontario since the under-20 showcase this winter, including a +3 differential at even strength. Since that date, the 18-year-old blueliner has collected five points (2-3-5) and his team has skated to a 7-3-1 record in that span.

“He’s a special player,” LaDue said of his teammate. “I don’t think he’ll be in this league for long and I’m happy to play with him. I’m happy to try to help him out as much as I can throughout his first year and he helps me out too with the way he plays. It’s been going well so far.”

As you watch Bjornfot on the ice, it’s hard to think sometimes that he’s just 18 years old. When I asked Reign Head Coach Mike Stothers, he gave a glowing review of the progress that Bjornfot has made in his short time with the Reign.

“He plays like a seasoned veteran, like you’d never know that this was his first year,” Stothers said of Bjornfot. “If you asked, people wouldn’t guess that he’s 18 years of age. It’s a terrific quality that he has, that he plays an efficient game that makes you think that he’s older and more experienced that he is.”

Bjornfot got his first introduction to professional hockey in North America at the NHL level with the Kings, as he skated in three games with Los Angeles in early-October. After he was assigned to Ontario later in the month, Bjornfot went on to score a goal in the first period of his first AHL game, and added an assist in a Reign victory. 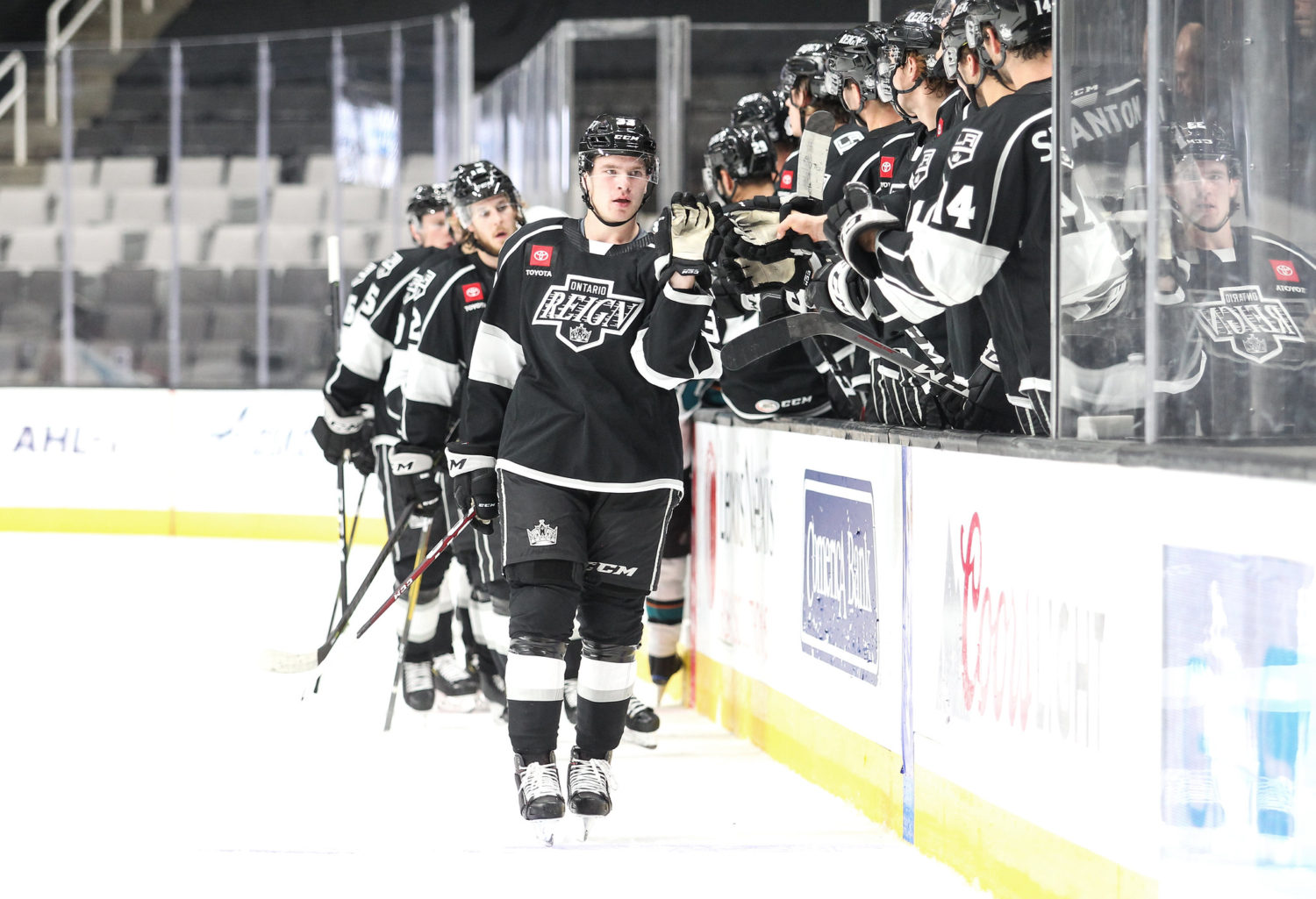 “I think my defensive part of the game, I think I’ve taken more strides in that,” Bjornfot said. “It’s a smaller ice and things go faster. It’s stuff with your stick and positioning, that’s the biggest difference [between the European and North American games].”

If there was an adjustment period, it was hard to notice it. The Swedish-born blueliner didn’t finish with a negative rating in any of his first nine games, and was an astounding +7 over his first four games of the season at the AHL level. By his side for the majority of the run, and most of the time since, has been the steady LaDue.

LaDue brings nearly 200 professional games to the table this season, including 69 NHL regular-season games, and two games played in the Stanley Cup Playoffs. The North Dakota product has proven to be a solid choice of partner for Bjornfot, with the consistency appreciated by the younger partner.

“I think it’s better to know who you’re playing with, for sure,” Bjornfot said. “He’s a great player, with a lot of NHL experience too. I think we have good chemistry and it’s going well out there…it’s incredible [to have LaDue to lean on]. He’s a good player and a good person too, so it’s nice having him on my side.”

The man behind the matchups, Stothers, has kept the pairing of LaDue and Bjornfot together for the majority of the season for a reason. The two have clicked, and though it’s not your old-school look of a puck mover with a stay-at-home guy, as Ontario’s top pairing last season of Kurtis MacDermid and Sean Walker was, the two have meshed well so far with the Reign this season.

“Two quiet guys, but they seem to work well together,” Stothers said of the pairing. “I think Laddy, as a righty, gives Toby a little bit of confidence to make some plays and not worry about making mistakes and Toby is a real compliment to Laddy too, in that positionally he’s very sound and he doesn’t put too much pressure on his partner. They’ve worked well together, and hopefully they can keep going.”

For his part, LaDue has enjoyed the pairing and the mentor role that he has inherited with Bjornfot this season.

After he spent the entirety of last season in the NHL with the Kings, LaDue saw himself as the victim of a glut of defensemen added at the NHL level. After an injury that affected his training throughout the summer, and set him behind a bit during training camp, he was the odd-man out and was assigned to the AHL for the first time since the 2017-18 season.

As now an experienced voice on a young group of defensemen, LaDue has been tasked with shutdown responsibilities, along with a spot on both special teams units. Though he’s scored at nearly half a point-per-game pace in his AHL career, LaDue has taken pride in his pair’s ability to play against quality opposition, night in and night out this season with Ontario.

The pairing has played a large role in the recent success that Ontario has seen, as it continues to claw its way through the playoff race. The Reign have begun to get consistent performances from younger players, such as Bjornfot, which has led to better on-ice results.

At this stage in the season, it’s time for first-year players to stop being rookies, and start being contributors. Bjornfot, with LaDue on his right, has taken that step and in the eyes of his head coach, his play right now is only the beginning.

“It also [makes] you think that if he’s at this stage right now, where’s he going to be two or three years from now, when defensemen typically get into their peak, after three or four seasons of pro hockey,” Stothers said. “At that point, he’s only going to be 21 or 22 years of age, so that’s huge upside for the Kings. It looks for a very promising career for young Toby.” 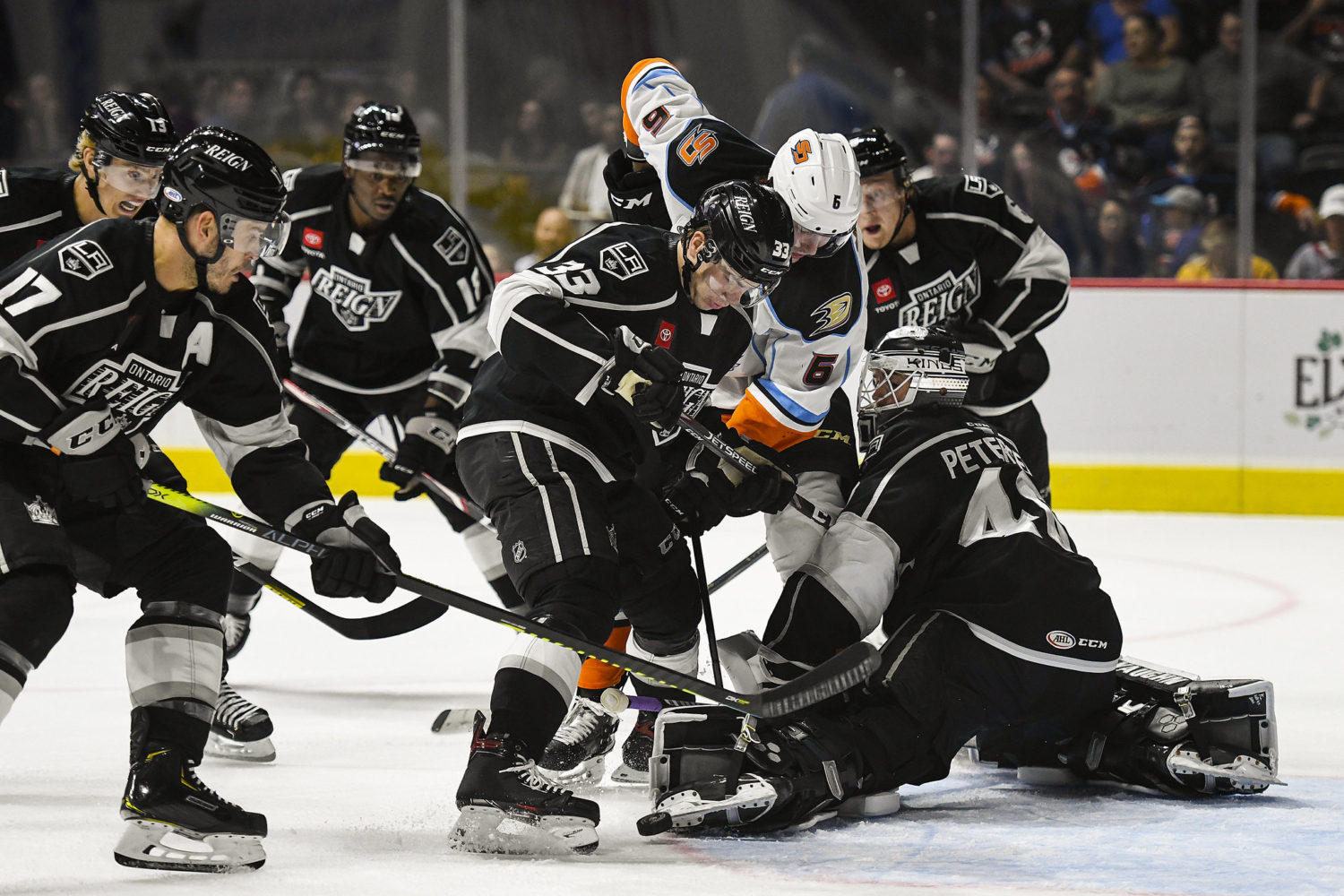