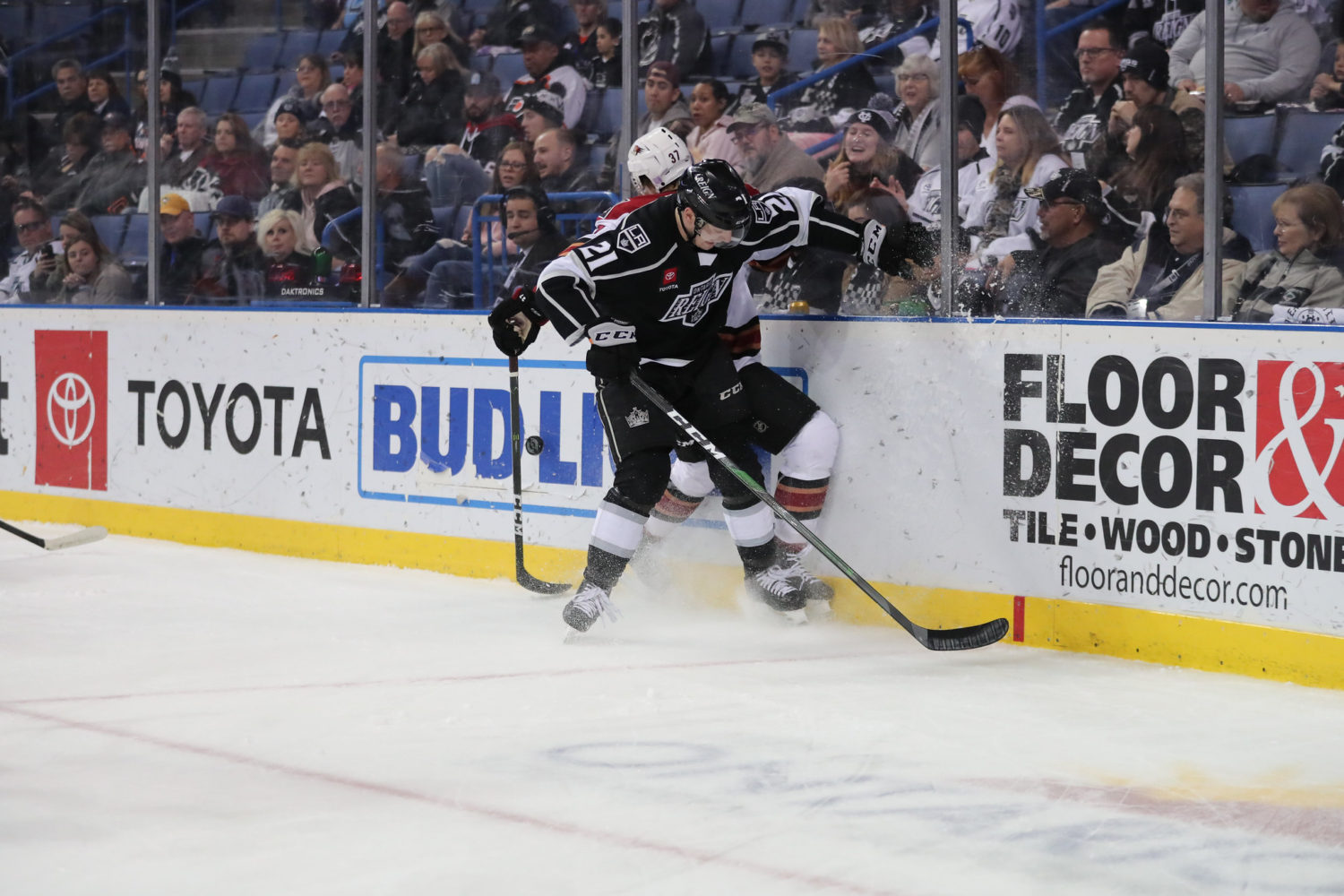 TONIGHT’S MATCHUP: The Ontario Reign return to Toyota Arena this evening to kick off a back-to-back set on home ice. Ontario began the week with a 4-2 victory over the San Jose Barracuda on Wednesday evening at SAP Center.

WHAT TO WATCH FOR: The Reign will have at least a couple of changes from Wednesday night, as goaltender Kevin Poulin was the first netminder off this morning, and defenseman Mikey Anderson was recalled to Los Angeles. Just forward Jacob Doty was on late this morning, leaving one additional decision to be made in advance of tonight’s game.

PLAYOFF PICTURE: Ontario’s midweek victory, combined with a San Diego defeat on the road in Tucson, vaulted the Reign back into fourth place in the Pacific Division, one point ahead of the Gulls. Ontario sits four points behind third-placed Colorado, and five points behind second-placed Stockton, with the Reign having played three more games than both teams, and six of Ontario’s eight March games coming against those two clubs.

ROAD WARRIORS: The Reign have been amongst the American Hockey League’s hottest teams as of late, especially on the road, as they extended their away winning streak to seven games on Wednesday. Ontario, which has an AHL-best 8-2-0 mark over its past ten games away from home, leads the Western Conference, and ranks second in the AHL, with 18 road victories this season, all coming in regulation or overtime.

PETTERMINT MATTY: Ontario goaltender Matthew Villalta turned in one of the finest performances of his AHL career on Wednesday, as he stopped 33 of the 35 shots he faced in the victory over San Jose, including all 15 he faced in the first period. Villalta improved his record to 9-4-2 in games in which he’s started this season, in addition to a .913 save percentage and a 2.84 goals against average.

SCHALL IN: Reign forward Tim Schaller scored in his Reign debut on Wednesday, as he tallied on the power play during the second period. Schaller, who was assigned by Los Angeles on Monday, skated in his first AHL game since the 2015-16 season with Rochester. Schaller was acquired by the Kings organization from Vancouver earlier this month – Read more from Schaller, from before his debut on Wednesday, here.

MIKE’D UP: Ontario defenseman Mikey Anderson has earned his first NHL recall, as he was brought up by the Kings earlier today. Anderson has six points (1-5-6) and a +4 rating over his last 15 games, and has showed continued development and growth throughout his first professional season. The 20-year-old defenseman was mentioned by Kings General Manager Rob Blake as a player to watch moving forward following Monday’s NHL Trade Deadline.

HEAD-TO-HEAD: Tonight’s game marks Ontario’s final chance this season to defeat the Tucson Roadrunners. The Reign enter tonight’s action 0-6-1 from their previous seven meetings, including a 0-2-1 mark on home ice at Toyota Arena. The Reign earned the lone point from a 2-1 overtime loss in Ontario in mid-January, but have been outscored 36-10 in the seven head-to-head meetings so far this season against the Roadrunners.

SCOUTING THE ROADRUNNERS: Tucson forward Brayden Burke has been amongst the best forwards in the AHL both this month and on the season. With 12 points from 11 games in February, Burke ranks tied for fourth in the AHL in points, while the 5-10 forward is tied for fifth with 52 points (21-31-52) this season. Burke is one of two players in the AHL with both 20 goals and 30 assists so far this season.