The NHL Trade Deadline has come and gone, and thus the roster picture for the Ontario Reign has become a bit clearer. The Kings moved five players around the deadline, though just one of those trades came today, with Reign alum Derek Forbort moving on to the Calgary Flames for a conditional fourth-round pick. The Reign thank Derek for his overtime game-winning goal on New Year’s Eve in Bakersfield, which came while Forbort was on a conditioning loan.

Kings General Manager Rob Blake spoke with media earlier this afternoon, and provided several Reign related tidbits that will shape the outlook of the Reign down the stretch.

– Forwards Gabriel Vilardi and Tim Schaller, along with goaltender Cal Petersen, were assigned to the Reign today, while forward Martin Frk was not. These roster moves make the latter three players eligible to play with the Reign down the stretch, in their final 16 games, as well as any potential playoff games the Reign play if they qualify. While losing Frk, Ontario’s leader in goals and points, is a blow, adding Schaller helps to ease that pain. The 29-year-old hasn’t played in the AHL since the 2015-16 season with the Rochester Americans, when he collected 26 points from 36 games. An NHL regular since then, Schaller has scored at a 0.68 points-per-game pace in his last two AHL seasons (14-15 & 15-16) and would add needed scoring depth if he in fact stays with the Reign. For now, Schaller is with the Reign and Blake was unsure, as of today, if a recall back to the Kings will be in his future. “A lot will be based on, there’s a lot of different rules in the CBA on certain types of recalls and different things,” he said. “We’ll have to go over to judge our roster from there, but as of today, [Schaller] was assigned to Ontario.” 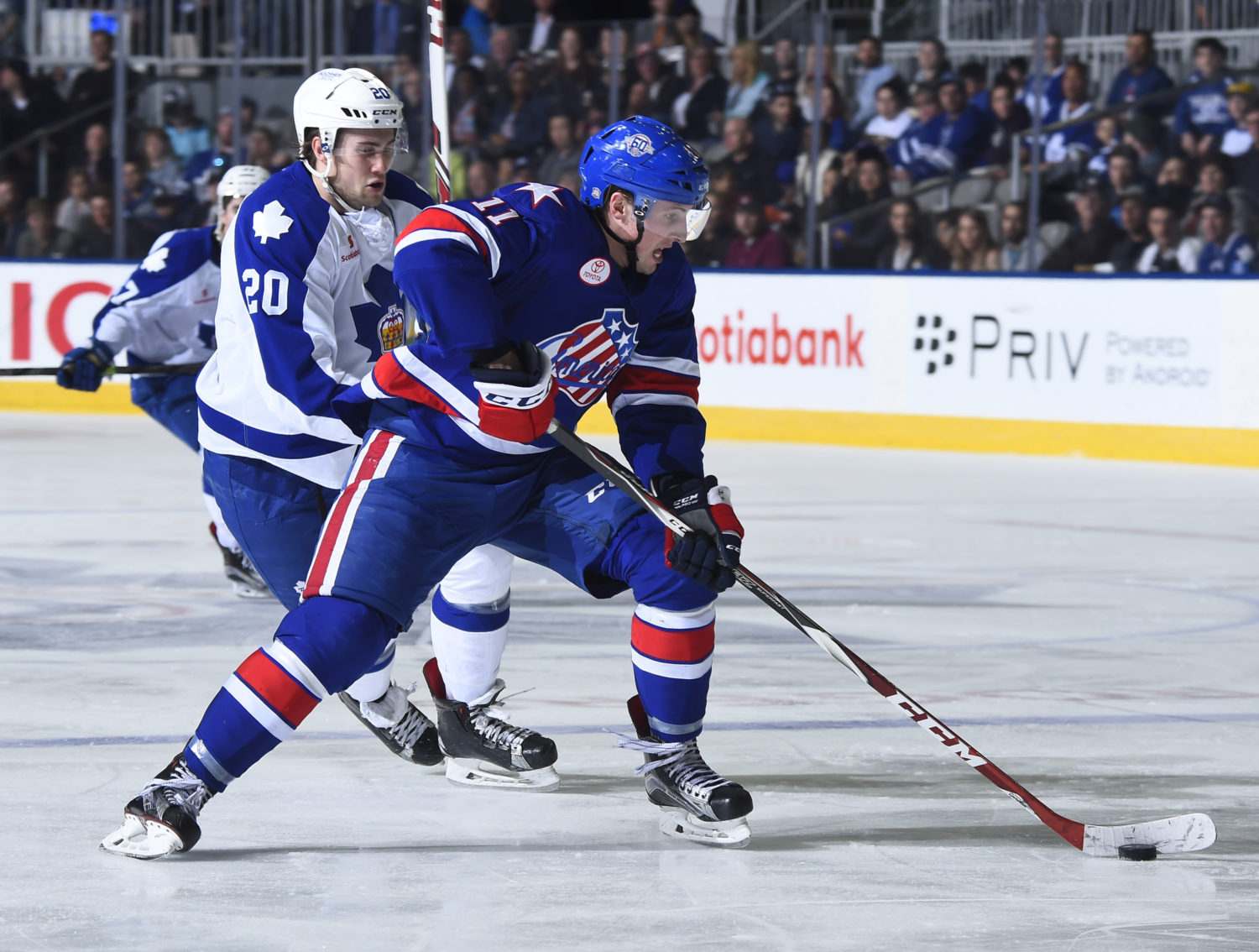 TORONTO, ON – APRIL 17: Tim Schaller #11 of the Rochester Americans carries the puck up ice past Tobias Lindberg #20 of the Toronto Marlies during AHL game action on April 17 at Ricoh Coliseum in Toronto, Ontario, Canada. (Photo Graig Abel/Graig Abel Photography)

– Regarding Frk, from Blake – “So I read a lot on the 10-game situation and everything. Even if we went past the deadline and he played in a game, even if we paper trailed him, he would still need waivers. He’s got two years left, a team could have claimed him but we weren’t going to risk that. I think, once we did those deals last week, we knew that Martin would be up here for the remainder of the season.” From this quote, regardless of the speculation and the rumors flying around yesterday around Frk and his 10 games met, the decision had already been made that the Kings view Frk as an NHL player at this point in time, and though they could have rolled the dice on sending him back to Ontario, potentially for the Calder Cup Playoffs, the risk of him potentially getting claimed after signing the contract extension on Saturday made it too risky. Frk has earned his time in the NHL, and he will remain there for the rest of the season.

– Regarding Vilardi’s future, today’s move could serve as an actual assignment to the Reign, or simply a paper transaction to ensure his ability for Ontario down the stretch. Blake said that there is a plan in place for how Vilardi will be handled moving forward this season, but he wasn’t quite prepared to share that plan in full at this point. “We do, I don’t know if I’m prepared to talk about it right now,” Blake said. “As of now, he’s assigned [to Ontario]. We like what we saw out of him here. It’s a tough three in four nights, matching up, the excitement of his first game, bringing his family in, matching up against Colorado’s speed, matching up last night with McDavid, Draisaitl, it’s a tough matchup for him. Todd protected him a little bit there last night, obviously, but I think we like what we saw out of Gabe and we’re going to be in a similar situation with some other guys this year too.”

– So, who are those other guys Blake speaks of? I asked him during today’s media availability who he has been impressed with, development wise, in Ontario as of late and he provided four names. “Yeah, I think I mentioned last time Mikey Eyssimont has had a pretty good season,” Blake said. “He came into camp and battled hard there. There’s the two young D, in Mikey Anderson and Toby [Bjornfot], obviously, Matty Villalta’s been real good since Cal came up here. He’s handled a lot of workload and he’s been doing a good job of that too.” Blake also said that he expects a defenseman to be recalled in the near future, and that quote would imply that Anderson and Bjornfot are at the top of that list. Anderson has six points (1-5-6) and a +4 rating over his last 14 games, while Bjornfot has been a top-pairing defenseman all season with the Reign. Read more on Bjornfot here.

– Lastly, the Reign have recalled forward Jacob Doty from the ECHL’s Allen Americans. Doty skated in three games with Allen, and tallied three assists. The 6-3 winger returns to the Reign, where he had spent the entirety of the season to date, before he was assigned by Ontario last week.

So where does this leave the Reign? As of this article, Petersen has already been recalled by the Kings, making his move simply a paper transaction, while Vilardi and Schaller remain with Ontario. The Kings currently have 12 forwards, 6 defensemen and 2 goaltenders on their roster, meaning that at least one recall is in the cards, perhaps both a forward and a defenseman. Keep in mind that the Kings are allowed just four standard recalls following the deadline, and Petersen marks one of those four. As Blake alluded to, expect answers to this question as the week rolls on. 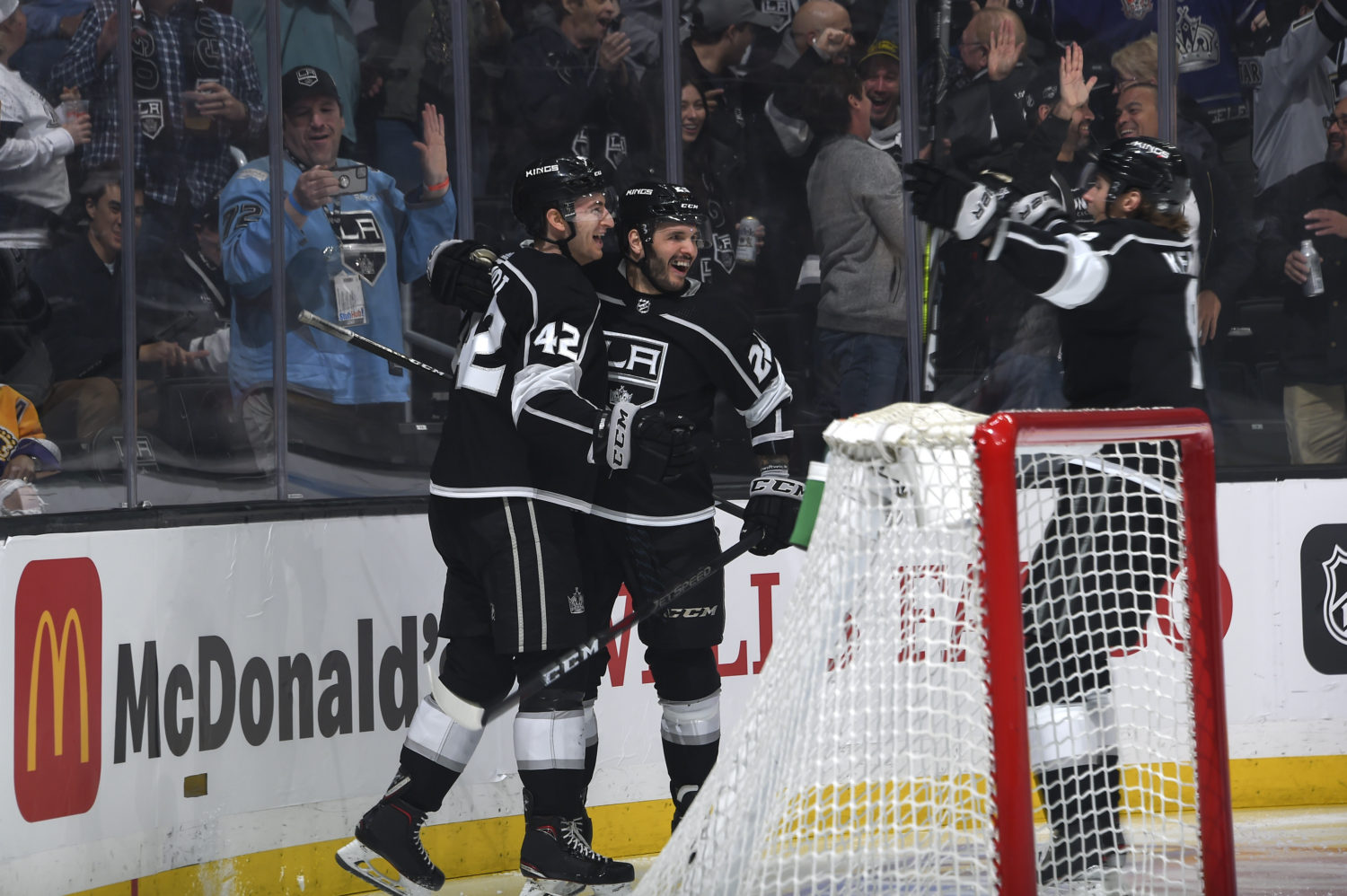 LOS ANGELES, CA – FEBRUARY 20: Gabriel Vilardi #42 of the Los Angeles Kings celebrates his goal during his first NHL game with Martin Frk #29 during the first period against the Florida Panthers at STAPLES Center on February 20, 2020 in Los Angeles, California. (Photo by Adam Pantozzi/NHLI via Getty Images)