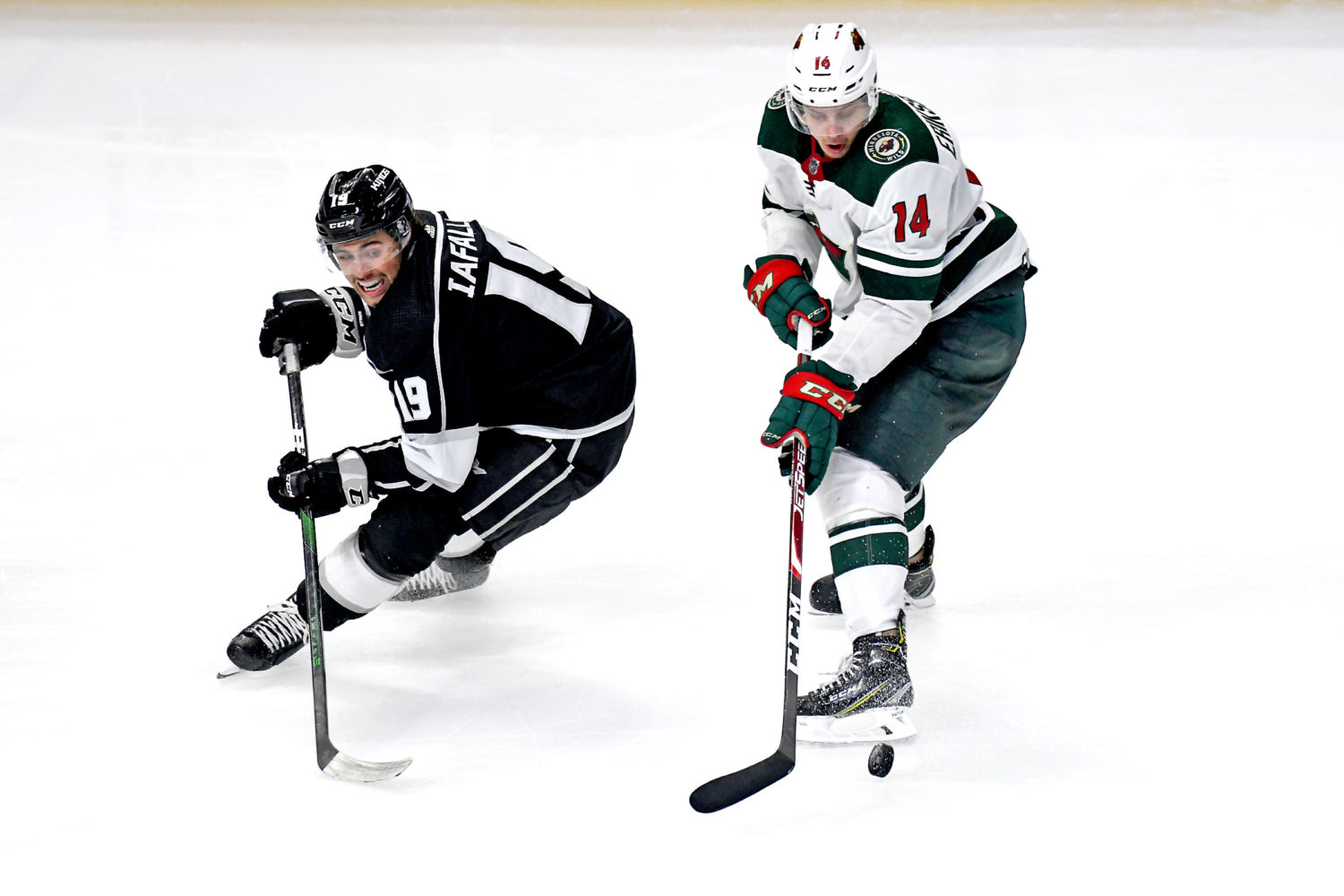 INSIDERS. A fine Wednesday afternoon to you. May your commute not be affected by the weather.
::checks Waze::
Well, heck.

The Kings took the ice shortly before 11:00 and aligned thusly:

— Reign news: Gabe Vilardi is active and skated through a full practice with Ontario this morning. That story is right here. Martin Frk also participated in a full practice with the entire team for the first time since suffering a middle-body injury on November 6. Derek Forbort didn’t stay on as late as others but got in a number of loops and rushes, and like Vilardi, was clad in a red jersey that indicates DO NOT HIT. There’s no timeframe with Derek, “but the fact that he is involved in a team’s practice is a good sign,” Todd McLellan said. This was the first time he’d taken part in a full team skate with Ontario. More Reign stuff below.

— As we’ve shared, the first rotations aren’t necessarily indicative of the lines and pairs that will be used in the following game. But the above is what they showed at practice, which should give you a template before you spend the next 27 hours Waiting For The Song.

Meanwhile, the Kings skated through a good teaching practice on the day between a recovery day and a game day against division-leading Edmonton. “Important and needed. Good,” Todd McLellan said. “Even before practice, we have had to lay off a little as far as video and stuff goes, but today we had a good system review, we had a good practice to review a lot of areas of the game that we need to polish up on. Not enough time in the day to get everything in, but we needed it.”

— A few notes on Alex Iafallo, who was among Los Angeles’ most noticeable forwards on Monday. That doesn’t say a whole lot – the Kings lost, 3-0 – but it did reinforce the strong play that sparked a four-game point streak ended by the Arizona game.

“I think he’s just a very reliable player, and I know that’s a very boring answer, but that’s just the facts,” said Dustin Brown, who regularly plays opposite Iafallo on Anze Kopitar’s line. “Like, he has the ability to make some really good plays, but it’s the ability to make the right play – I think he does that a lot in little areas. Like I said, it’s a boring answer, but there are lots of guys that struggle with being consistent – it’s a nothing play in the grand scheme of things, but it’s the play that needs to be made so we can just get out of the zone, that we can get in on the forecheck. It’s a lot of those little plays that I think makes him a very effective player. He has a knack for making those plays at a high rate, and I think a lot of players struggle with that, to be honest. It’s making those little, subtle plays that keep a play alive that’s probably the biggest part of his game for me.”

Iafallo will enter Thursday’s game with four goals and 10 points in 21 games, and though Brown hasn’t recently been benefited from his line’s scoring spike – Kopitar’s six-game point streak also ended Monday – that may be due, in part, to continuing to get familiar with his positioning on the forecheck. Brown, as a right wing, isn’t regularly the first to get into the zone to add pressure in the 1-3-1, and like Iafallo has four goals and 10 points in 21 games.

Todd McLellan, on using Alex Iafallo to the left of Anze Kopitar and Dustin Brown:
31 teams coaching staffs would play him like we do, because coaches tend to like players they can trust in all situations. He’s got the tools, he uses his toolbox, he gives you everything he has whenever he can, and what else can you ask from a player? There’s no shortcuts, there’s no cheating. If he makes a mistake, it’s a mistake. So, I enjoy putting him on the ice, It’s probably a formula that others need to realize or understand. He’s not going to lead our team in scoring, but he’s got to find ways to play a lot of important minutes, because we want to keep putting him out there.

McLellan, on the next step for Iafallo, given his strong detail:
He’s still growing up in the league. He’s been here for a little while, but there’s parts of the game all over the place that he’s got to continue to improve upon, and I’m sure he’d like to see a little more finish in and around the net when he gets the opportunities. I’m sure he’d like to see when he’s on the ice penalty killing his group or his foursome do a better job. Just faster, stronger as you mature as a man. It never ends, it really doesn’t, and I don’t think it will for him because he’ll just keep working and trying to find ways of getting better.

Dustin Brown, on how the shift in the 1-3-1 affects his line and the first two forwards into the zone:
Generally speaking, we want our right wingers on that red line on the right side just the way we’ve been playing. As a group of three, I think we’ve gotten into a pretty good rhythm in that neutral zone, because maybe once or twice in in the time that I’ve played with them – I’ve been a few games off that line – but consistently it helps me, because that’s a new position for me to play, that kind of ‘hold pattern’ over there. I’ve been on the forecheck and neutral zone maybe four or five times, a handful of times, so again, it comes back to just learning it.

— Mike Stothers, on Cal Petersen’s maturation outside of his numbers and stats: “Cal’s been a different animal ever since he’s been here, right? He’s just a natural leader and he doesn’t shy away from anything. We’ve talked before about last year or this year when games aren’t going very well for us as a team and the score is not very flattering for us. A lot of times you think, ‘OK, well, let’s get him out of there. Cal’s the exact opposite. He wants to stay in. He does not want to just allow things. He wants to finish what he started. He’s told me straight up, ‘Stutts, I don’t care if it’s 10-0. I want to stay in the net.” There are times where you just say ‘OK, I appreciate that, and I really like your responsibility in that regard,’ but you’ve got to get him out. But that’s just the type of guy he is. If he gives up one, he’s not going to give up the next one. So, I admire him for that, and he’s been pretty much consistent. Like, not much really bothers Cal. It’s unbelievable. You’ll s ee him here in practice and he’ll break odd stick, but he’s just so competitive that he hates to give up a goal. It’s just a matter of him dialing in. He’s been terrific for us – he’s actually been a savior for us, really, because we don’t score a lot of goals. Our record is reflective of how good our goaltender has been.

all that & why Jim roots for favorites over underdogs