Kempe at wing? Walker’s strides without the puck; Quick vs Bernier history; links 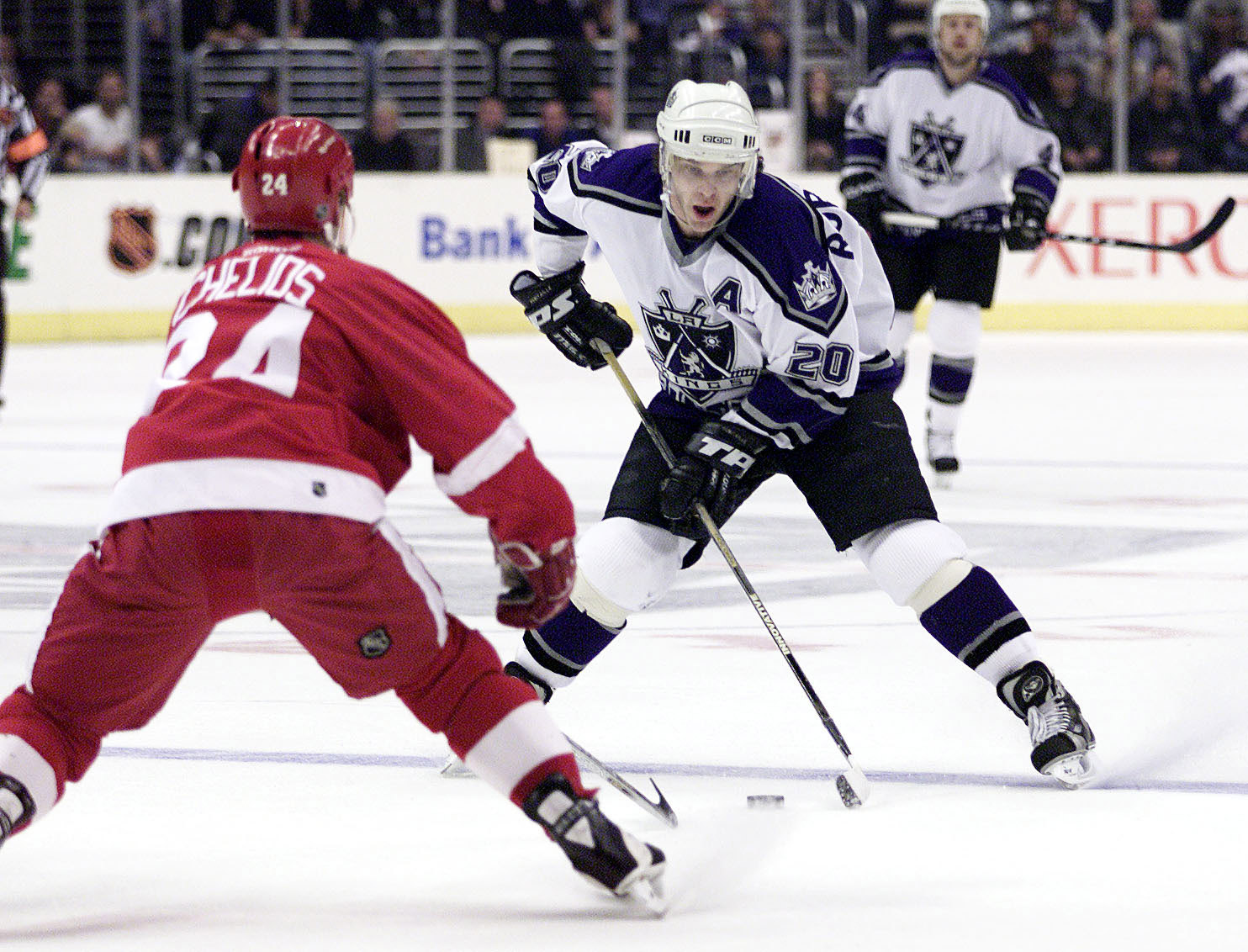 — It’s looking like we’ll see some of Adrian Kempe at wing tonight. Carrlyn Bathe spoke with Adrian today and should have a bit more on the broadcast, but the lineup change we’re expecting is Kempe jumping in for Carl Grundstrom, which would place him to the left of Blake Lizotte and Austin Wagner.

Todd McLellan, on the qualities he’d like to see from Adrian Kempe at wing, as opposed to center:
The same qualities. The player’s not going to change overnight, but I feel that he’s got really good legs, as well. He’s a tremendous skater, he’s got size, he always seems to be moving. Can we get more out of those tools maybe by putting him up on the wall where he can dig pucks out and teammates can benefit from it? I think in his case right now, he’s giving us a really honest effort, but there’s not a lot coming out of it, and that’s really frustrating for a player, because you believe you’re working hard. So, we’ll give him a menu of some things that we would like him to do and see if he can work towards that. Not a lot of it has to do with goals or assists or anything like that, it has to do with what leads up to those rewards, and we have confidence that he can do it.

— I shared this yesterday, but I didn’t see a ton of the first half of Tuesday’s game because I was doing Kovalchuk Stuff. I re-watched a compressed version but didn’t get a chance really go back and take a look at some of those finer Sean Walker moments – those little races to pucks he wins and the plays he makes once retrieving them.

Walker’s motor, known well before he signed his ELC, has been standout, and he’s really put it to use to put himself in position with his body to retrieve and control pucks before sending them in the other direction. It’s been really impressive, a night-and-day improvement from his play without the puck last season, and a really good representation of smaller, lower-gravity defensemen being so useful in a fast, quick-turnaround game when able to retrieve and send them off quickly. But that’s just one blogger’s observation. Let’s hear from someone who doesn’t listen to 1978 Grateful Dead shows on the way into Staples Center:

“Walks has legs, and I think today’s defensemen, moving forward, it used to be, ‘boy, that guy makes a good first pass and he’s able to get out of trouble that way,” Todd McLellan said. “Today’s defensemen are built with that in mind. The first pass is important, the ability to break it out, but can you escape danger or forecheck or conflict using your legs? And Walks can do that, and he’s got a very good hockey engine. He can stay on the ice a long time without a lot of fatigue. At least physically, mentally, he’s still learning how to deal with situations, but he played good minutes, he played a lot of minutes and he was capable of it.”

Walker played 24:35 on Tuesday, usage that bested his career-high by more than three minutes. The Kings won that game. Whether there was added confidence in playing him against the league’s best forwards revealed an interesting preview of the trial by fire and versatility required as the team sorts and takes stock of its assets.

“We have to have a pair that can go on the ice and play against the league’s top players, so we’ve tried a number of different guys in there, and they’ve all done a good job, but we’re looking for that steady pair and it’s Walks’ turn right now, and one game in he’s done a really good job,” McLellan said. “When you’re in the NHL, we expect you to make those plays. Not be perfect, but expect you to make those plays, and he’ll get more of that tonight, and if he keeps holding onto that position, it’ll keep growing. The back end, the forwards, it’s going to be in and out, moving around all season. Guys are going to experience different roles, different minute levels, just so we get to know, and they get to experience.”

— McLellan on Prokhorkin, who managed to take 16 faceoffs – winning seven, losing nine – in 9:41: “Yeah, and he was good in the circle. That line contributed to a win. They were able to forecheck, drew some penalties, Pro made some nice plays, deserves to be back in tonight. He’ll get back-to-back games for the second time this season and we want him to continue to move forward. He’s got a lot of skill, some size, let’s keep seeing it night in and night out and we’ll keep going day-to-day.”

— Tonight is 24-year-old Canton, Mich. native Matt Roy’s first career game against the Red Wings, a team that anyone from his time and place growing up was a fan of. His dad and brother were huge fans, and as someone who loved and admired both, he didn’t have any choice but to follow along. “It’s hard not to be a Wings fan when they went to the playoffs every single year I was growing up,” he said.

It’s not his first game against Dylan Larkin, however. For his first home game ever at Michigan Tech, he matched up against Larkin and the Michigan Wolverines, who made the trek north to serve as the Huskies’ opening weekend opponent. “Big school band there, the fans were pretty crazy,” Roy said. “Larkin’s a really good player. You know when he’s out there, for sure.”

Roy, a seventh round draft pick in 2015 who spent four years in Houghton, will appear in his 44th career game tonight. He had just turned six when the Kings upset the Red Wings in the first round in 2001. 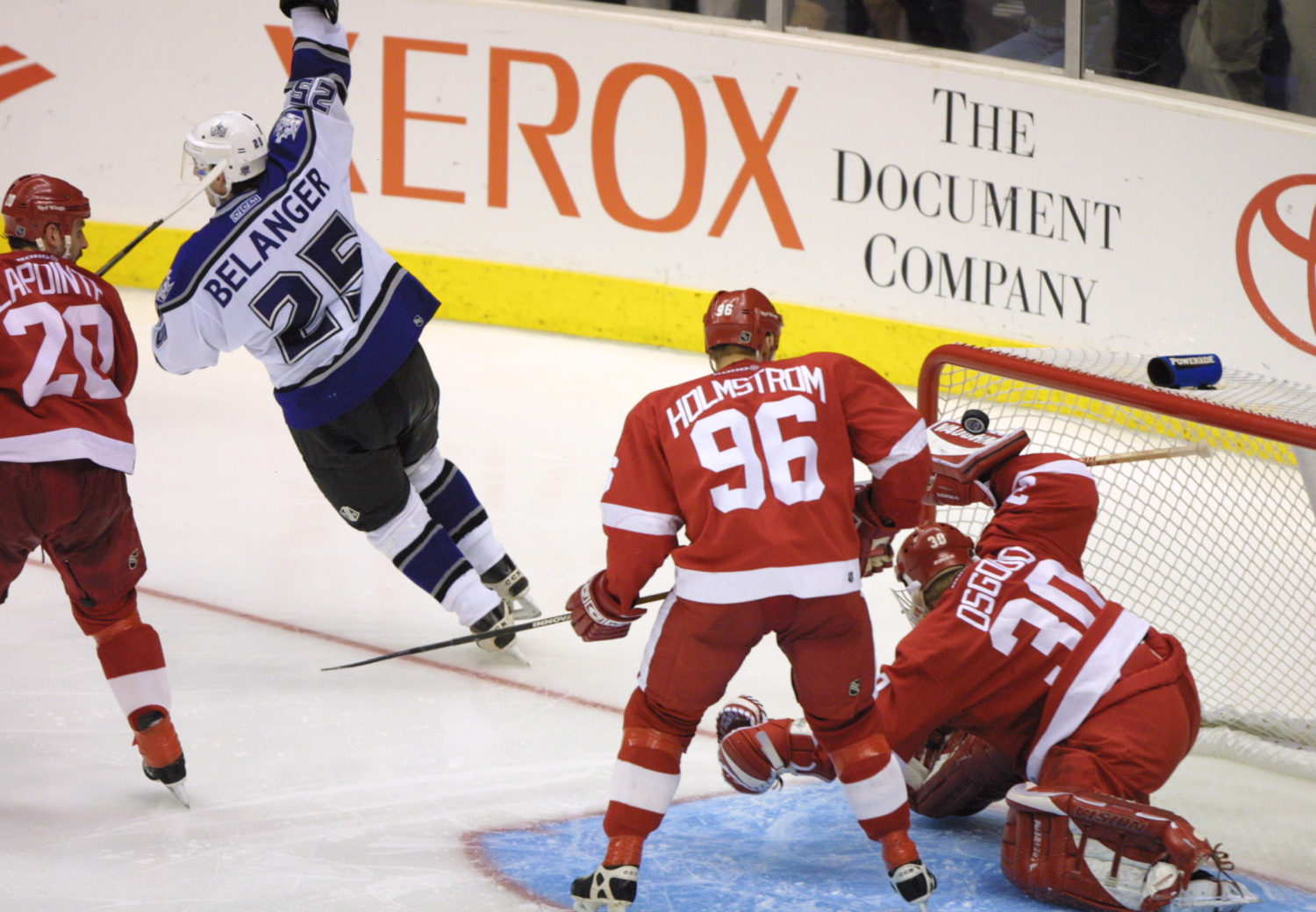 Four of those games began as Quick versus Bernier, though a groin injury removed him from his first start at Staples Center as a Kings opponent after just one period. James Reimer came in and backstopped Toronto to a 3-2 come-from-behind win that put a halt to an eight-game winning streak – and Darryl Sutter’s cheerful demeanor, apparently.

On an assertion “nobody knew where the puck went” on Toronto’s game-winning goal:
I think everybody knew where the puck went. I think he thought it was in the net, maybe. The power play wasn’t good enough. Cost us the game. [Reporter: Do you have some ideas for tinkering with it?] Well, we’ve got to shoot pucks a lot more. The goal they scored was just give it to him, and he shot it.

On whether Dustin Brown got hurt:
No, he got benched. [Reporter: Something specific throughout the game?] No, their line was tired, so we didn’t play them much. It wasn’t Brown. Don’t ask questions ‘Did guys get hurt?’ ‘Yeah, he got hurt. He was hurt.’ I always tell you guys when somebody gets hurt.

If you’re keeping score, ::keeps score:: Bernier has won two of his eight starts against Los Angeles, one of which was a shutout at then-Air Canada Centre against Jhonas Enroth, and one Anaheim overtime win against Quick and the Kings on the final day of the 2016-17 season. Quick has won two head-to-head match-ups: his return to action against the Ducks after missing extensive time in 2016-17, and a late-season Kings-Avalanche game the following season.

— Via Gregg Drinnan, a veteran reporter, columnist and author covering the WHL and hockey in Western Canada: Former Kings assistant Don Nachbaur, who served under John Stevens, is now a co-head coach of HKM Zvolen in the Slovak Extraliga. … Yesterday was the 25th anniversary of Lisa on Ice’s airing, and LA Kings Season Ticket Member Mike Scully and other members of The Simpsons family were profiled by Alex Prewitt, a terrific writer at Sports Illustrated. More on Lisa on Ice appreciation here!