Reign forward Mikey Eyssimont and his battle with Crohn’s Disease 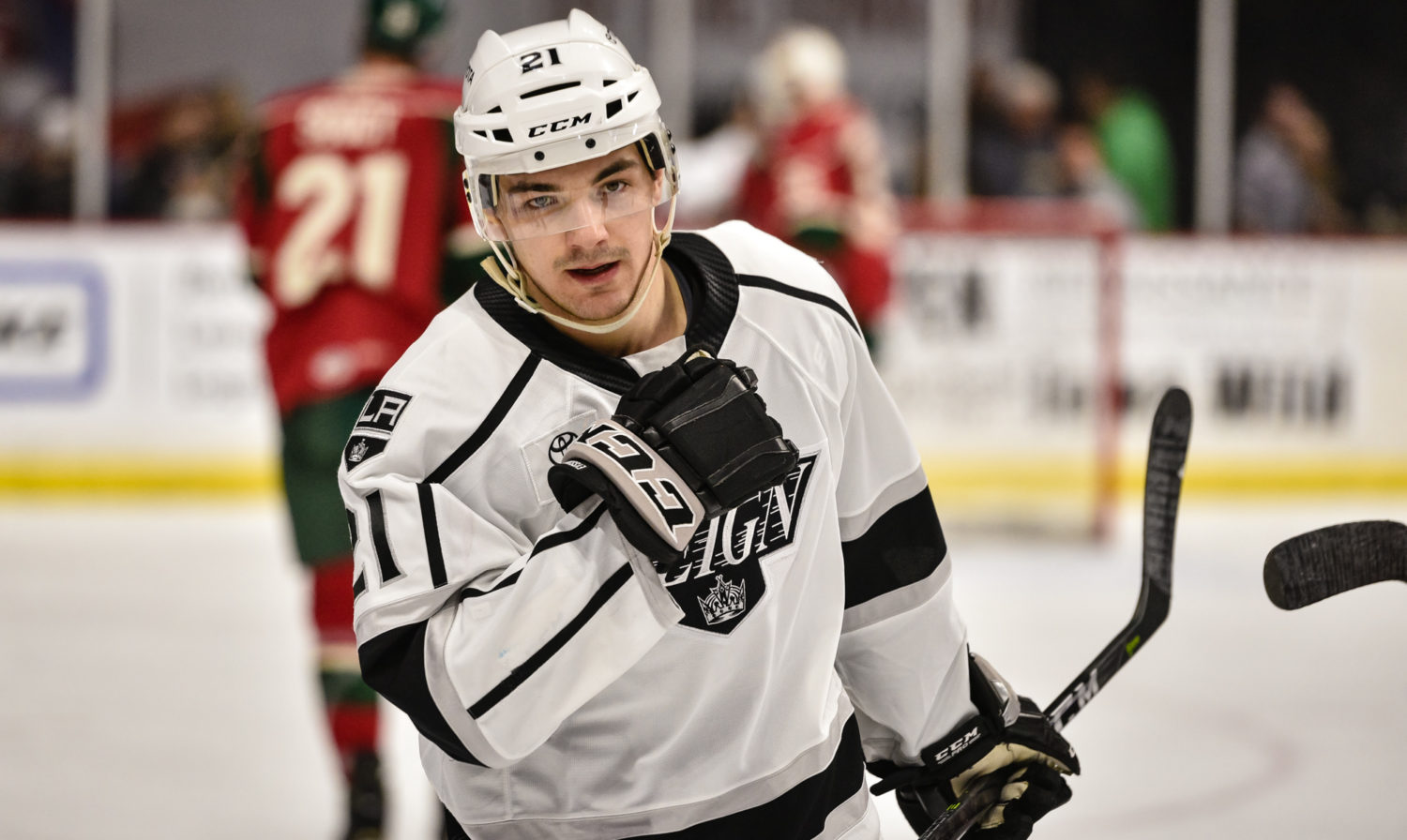 Mikey Eyssimont knew that something was wrong, but he didn’t have a clue what it was. By the beginning of his junior season at St. Cloud State, he was hardly able to make it up the stairs to his apartment without needing to take a break. Finally, during one early-season practice, he had enough.

“As the summer came to an end and my junior year started, I just started losing energy little by little,” Eyssimont said. “I couldn’t go up the stairs without needing to sit down and take a breath. [In a September practice] I skated down the ice and shot the puck and I just realized that I just couldn’t practice. I had to get off. I went to my trainer, Bryan DeMaine, at St. Cloud State and we went to the hospital together.”

The situation was confusing and frustrating for the Littleton, CO native, who had built a strong summer training regimen heading into his third season of collegiate hockey. For Eyssimont, the decline hit him rapidly, and it wasn’t long before all of the hard work he had put in through the months prior had seemingly evaporated.

“It was really frustrating, because I had such a good summer of training back home in Colorado,” Eyssimont said. “High altitude, mom’s cooking all summer, and I felt ready to go for the season. As the decline process started happening, I lost everything I had done all summer.”

After going to the hospital, it was originally thought that he might have mononucleosis, but after a day or two, Eyssimont found out that he had Crohn’s Disease, an inflammatory bowel disease, that was draining him of all his energy and kept him in the hospital for five days. Crohn’s Disease is one that heavily restricts a diet, forcing the aspiring professional athlete needed to learn which foods would “flare up” his disease, as Eyssimont worded it.

“After I was diagnosed, I worked with a nutritionist, who specializes with people who have dietary problems like lactose intolerance or Crohn’s, and I did what’s called an elimination diet,” he explained. “I started eating just gluten-free bread, eggs, potatoes, just the [simplest] stuff that you can think of, and then slowly started to add things in week by week and see what I could and couldn’t eat.”

One of the more challenging aspects of this is that it’s not simply a matter of eating or not eating one particular food over another. How Crohn’s Disease affects one person is not the same as it affects another, and because the list of appropriate food may vary from one person to the next, he had to go through a trial and error process to determine it.

Essentially, there isn’t a playbook that everyone with Crohn’s gets to use because of how differently it can affect different people.

“As I’ve grown with it, and it’s still new to me, it’s been just over a year, I’ve talked to a lot of people with the disease and I’m starting to learn more about myself,” he said. “It’s a very individualistic disease, everyone is different…even stuff that I ate growing up, I can’t eat it anymore. It comes in flares. Even if you eat something one time and it’s fine, it may not be fine the next time, so you have to stay away from it if it can cause a flare.”

While the diagnosis was challenging, it didn’t change the fact that Eyssimont was an drafted prospect with dreams of playing for the Los Angeles Kings, who selected him in the fifth round of the 2016 NHL Draft. The timing of the diagnosis, which came right as he was beginning his junior season of NCAA hockey, was particularly untimely.

Being a Division-I athlete, looking to perform at the level to warrant an NHL contract, the ascent back to top physical condition was even longer than it might be for someone in a different line of work.

While it certainly wasn’t easy, and was maybe even less so being that he was away from home, Eyssimont described his support system at college as “one of the reasons he loves it [at St. Cloud State] so much.” He said that while it would have been great to have his family there with him, he noted that his teammates, coaches, teachers and even the college’s advising staff took the time to check in with him while and after he was in the hospital.

Defenseman Kevin Gravel, who played at St. Cloud from 2010-14, was a workout partner of Eyssimont’s over the past summer. Three months prior to Eyssimont’s diagnosis, Gravel was given the same one.

During a sapping bout of Crohn’s in the summer of 2017, Gravel estimated that he lost 20 pounds over a three-day stretch and nearly 40 pounds overall.

“We never played together [at St. Cloud] but we kind of crossed paths a little bit,” Gravel said to LAKI earlier this season. “This past summer, he lived in Minneapolis, so I trained with him, same gym, and worked out with him all summer, so I got to know him pretty well. He’s a good kid, he actually went through that whole process right around the same time I did, maybe even a little later because I think it went into the season for him.”

Though the two did not play together with St. Cloud, nor did they intersect in the AHL, Gravel provided Eyssimont with a support line. A professional hockey player that had just gone through a similar path? Certainly not a bad person to lean on.

“[Gravel] reached out to me and told me what his path had been like, what he can and can’t eat,” Eyssimont said. “We’re similar, but we’re not the exact same on what we can and can’t eat but it was just nice to, right away, have someone that you know well to talk to you about it. He went through the same thing.”

Gravel added that the street flows both ways. He said that it was nice to have someone to bounce things off of and same in reverse in Eyssimont, with two players in the same profession.

“It’s good, he’s on the same medication I’m on and everything, it’s good to have a buffer to bounce things back and forth on and vice versa,” Gravel said. “When I heard that he was going to the same thing, I texted him, just to let me know if I can help because I’m going through the same thing and same for him. It’s been good to have someone to bounce back and we’ll keep in touch and I’m sure I’ll see him again this summer.”

The two hockey players aren’t the only athletes to suffer from the disease either. Longtime NHL veterans Kevin Dineen and Theo Fleury played with the disease and current Cleveland Cavalier, Larry Nance Jr., currently plays in the NBA with Crohn’s Disease. Nance established the Athletes vs. Crohn’s & Colitis charity and Eyssimont mentioned that the two connected via social media.

“He reached out to me on Instagram, it was pretty cool to be able to talk to him, I think it’s great, his foundation, what they do,” Eyssimont said. “I’m excited for whatever I can do to help promote his foundation and make some money for it.”

What Eyssimont will do works into the upcoming Ontario Reign 5K, to be held on March 31. With Eyssimont’s ties to the charity, all proceeds from the 5K, run by the Hope Reigns Foundation, will be donated to Athletes vs. Crohn’s & Colitis. Registrants will be entered to win merchandise signed by Nance Jr. as well as tickets for that day’s Cavaliers game against the Los Angeles Clippers matchup at STAPLES Center.

Nance Jr.’s foundation made sense for Eyssimont to partner with, because of the similarities they share both fighting the disease while living out their lives as professional athletes.

“Me and my family have looked at a few [foundations], there’s quite a few for UC and Crohn’s, but this one kind of spoke to me because I always watched Larry Nance Jr. when he was with the Lakers, and then when he got traded, with the Cavs, and it’s for athletes,” Eyssimont noted. “I liked what their message was and I’m happy to support it.’

For Eyssimont, the 5K event presents his first opportunity to use his own platform to give back. As a professional athlete, Eyssimont knows he has the opportunity to help raise both awareness and money to support a personal cause. While he was originally hesitant to speak publicly about his own diagnosis, he’s beginning to feel more and more comfortable with it and is excited to help support the cause later this season.